St. James’ Park is an all-seater stadium with a capacity in excess of 52,000, set in the city centre of Newcastle, and home to Newcastle United.

The ground has largely been rebuilt in recent years. With the completion of the additional tier to the Milburn and Sir John Hall Stands, the capacity has been increased substantially.

These stands have a huge lower tier, with executive boxes and a smaller tier above. For the 2008-09 season onwards, away fans have been allocated the top tier of the Sir John Hall Stand, which is named after their former chairman. The views from the top tiers are excellent, although those with a fear of heights might not farewell, and a pair of binoculars sometimes come in handy to see events in the penalty area at the other end of the stadium!

How to Get to St. James’ Park

The ways to get to St James Park are:

Getting to St James’ Park By Road

Away fans driving from the North should exit the A1 at the A167 junction, signposted City (Centre), filtering left and following “City” signs for about 3 miles. Exit onto the B1318, signed City Centre North / Haymarket / University. Once on the slip road, take a right turn and then a left. Take another left at the next roundabout and keep driving past the Royal Victoria Infirmary which is on the right. Bear left passing through two sets of traffic lights and turning right after Baker and Stonehouse. The ground is on the right.

From the South, the A1(M) divides after junction 65. Keep left, following signs for the A1. Follow signs for Newcastle and Airport, passing the Angel of the North on the right. Continue for 3 miles before turning onto the A184, signed Gateshead / Newcastle (Centre). After a further 1½ miles, take the right hand lane (A189) to Newcastle. Go over Redheugh Bridge and into St. James’ Boulevard. At the Gallowgate roundabout (approx. ½ mile) turn left and the stadium is on the right.

Getting to St James’ Park By Rail 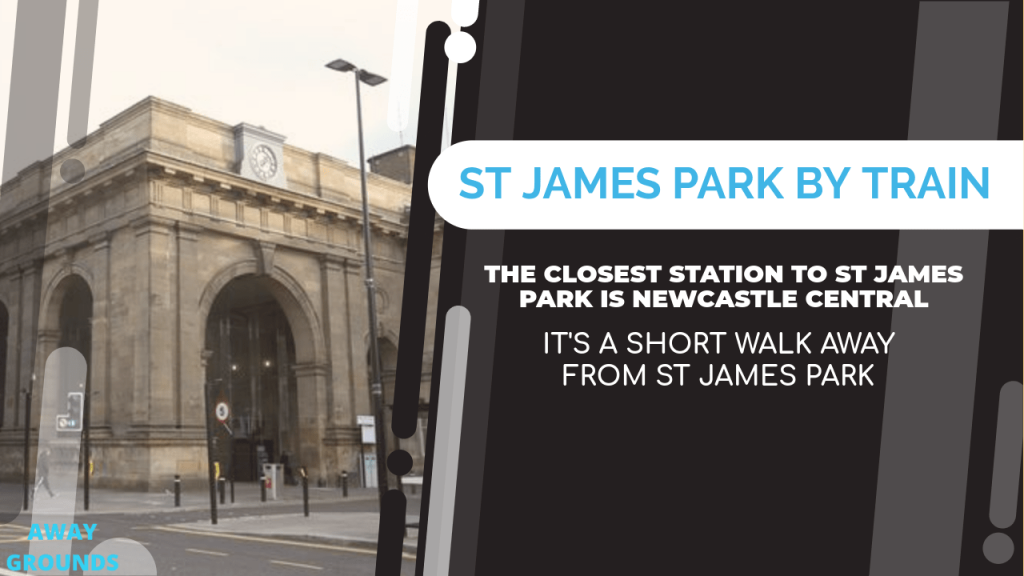 Getting to St James’ Park By Air

The nearest airport is Newcastle International, located some 6 miles north of the city. St. James’ Park can be reached by bus, taxi or Metro Link (underground). The stadium has its own Metro station (St James) which can be reached in approximately 25 minutes from the airport. Click here to check the current flight times

Getting to St James’ Park By Taxis

There are several taxi companies in Newcastle that can take you to and from the stadium. You can always prebook a private hire taxi, or hail a black cab on any highway.

Calling all Newcastle Taxi Companies – Why not advertise your company here?.

Below is a map of St James Park:

Where to Park at St James’ Park?

No on-site parking is available, though there are extensive parking facilities in the nearby city centre. 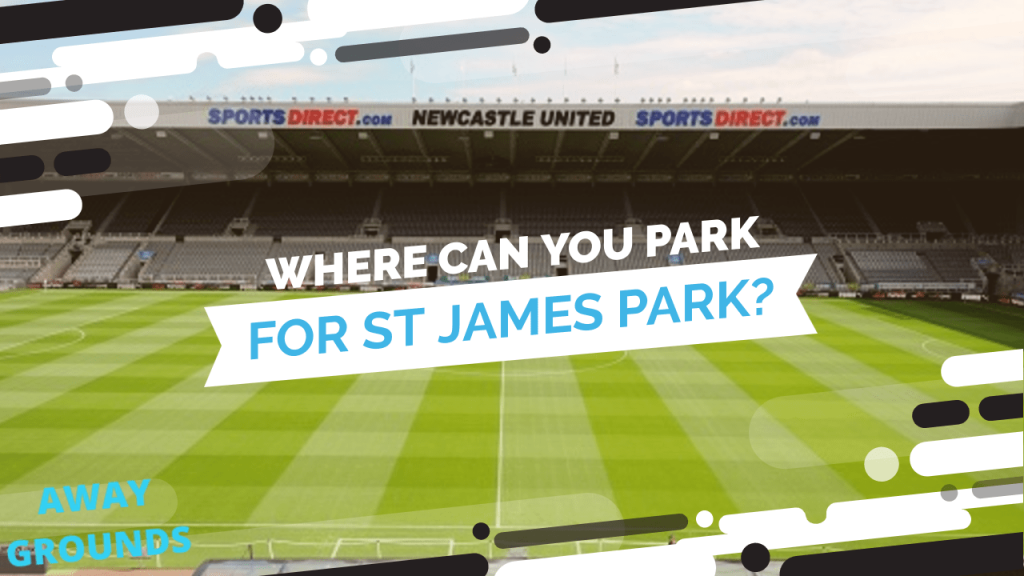 Getting Tickets for Newcastle United

You can buy tickets for Newcastle United home or away games through their official website.

Tickets for big games sell out fast and the best seats always go first so keep your eyes peeled for the sale dates and be the first to purchase a ticket.

Below us a St James Park Newcastle seating plan: 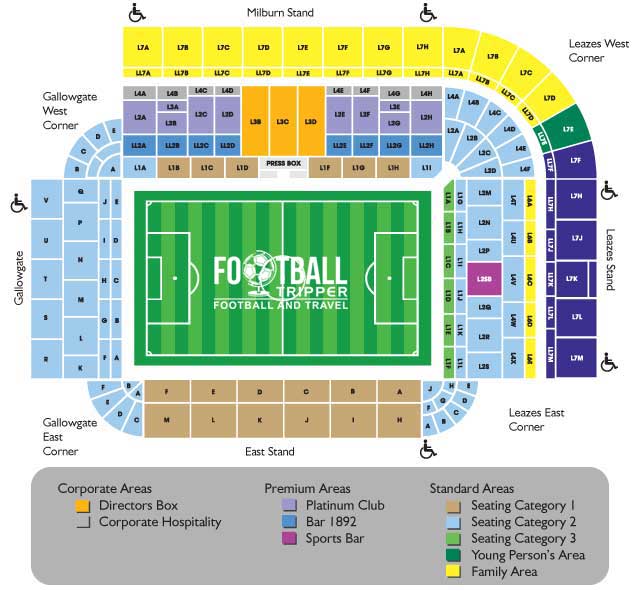 Newcastle City Centre Premier Inn, New Bridge Street West, Newcastle Upon Tyne, NE1 8BS is situated in the heart of the city centre, next to Eldon Square shopping centre and a short walk from the Quayside and Metro station. The hotel has received good reviews, offering modern accommodation with air conditioning and Sky TV. There is also a late bar at weekends.

St. James’ Park is situated right in the heart of Newcastle, with many bars and pubs from which to choose. However, the majority of visiting fans appear to favour those near Newcastle Central Station. 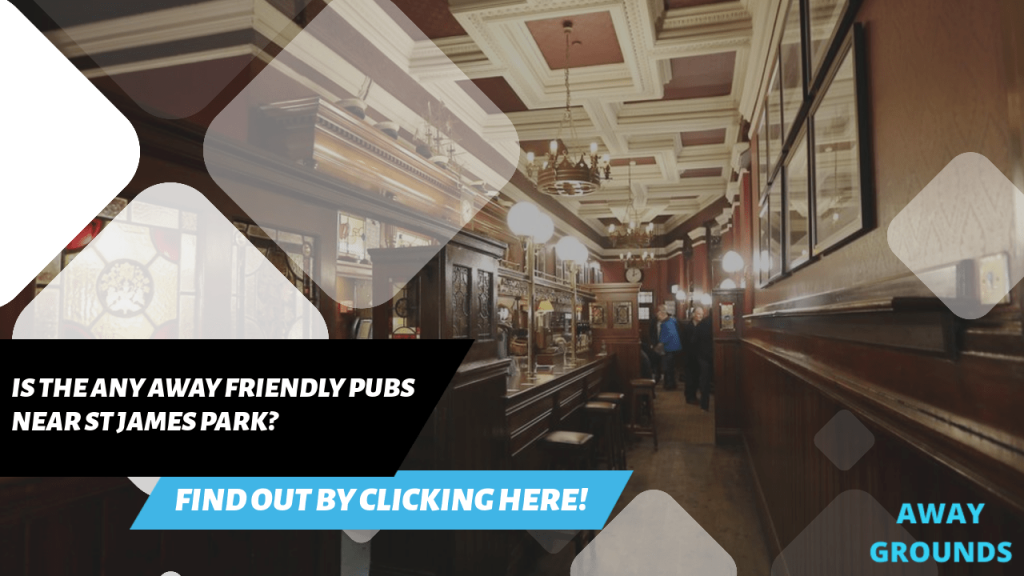 O’Neills and The Lounge were recommended as was A Head of Steam, though it should be noted that none of these admit children. These are considered the best Newcastle away fans pub options by many.

What Have other Away Fans said about their trip to St. James’ Park?

The major complaint from away fans is their seat allocation at the top of the Sir John Hall Stand, on level 7. This necessitates the negotiation of no less than 14 flights of stairs! One visitor likened reaching his seat to “scaling the north face of the Eiger.” Many remarked that although the view is still good, seats are a long way from the pitch and would not suit those with poor eyesight. 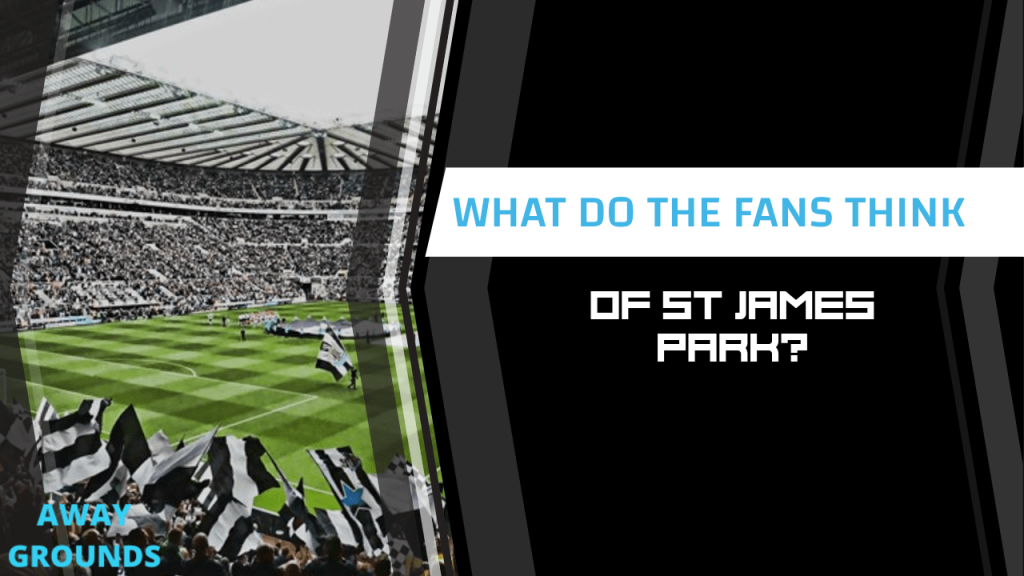 Otherwise, most visiting fans enjoyed their day at St James’ Park, though some thought the stewards overly strict. The highlight of many fans’ day was the welcoming reception given by the home supporters. Numerous fans noted Newcastle as one of the best away trips in the country.

If you are travelling to Newcastle and have any interest in sport this is one not to miss. The stadium is fantastic and the tours are fairly priced and informative. A well spent hour and a half and only 5 minutes from the town centre when you gave finished your tour.

Great venue to watch football with an awesome crowd and a great atmosphere. One of the best grounds in the world with great supporters.

Although Newcastle United has always called St James’ Park home, they were not the first team to play there, with Newcastle Rangers, who collapsed in 1884, being the first tenants. In 1892, the Magpies arrived at the point of formation.

The original stand, Gallowgate End, was built in 1899 and could accommodate 30,000 standing fans. With the construction of what is now known as the Milburn Stand six years later, the capacity was expanded by 100%.

Despite many plans being put up, stadium extensions were few and far between for decades upon decades due to a combination of legal challenges, financial troubles, and poor on-field results.

Half of the East Stand was completed, but the West Stand expansion, which was pushed through after the Bradford City fire raised concerns among the club’s management, was hardly going to win architectural awards due to a shortage of cash.

In the mid-nineties, however, everything began to fall into place; all four stands were either tarred or entirely rebuilt, and each corner was also filled in to complete the Newcastle stadium. It increased the capacity to 36,000 people. The expansion was on the agenda again under Freddy Shepherd a few years later; two stands and a corner saw second tiers built at a cost of nearly £40 million.

The cost is high, but the capacity has increased to 52,000 people.

St James Park throws more than just football games. This stadium could be the perfect venue for one of your events, from your meetings to a wedding.

Getting in touch with the stadium will help you to choose the best room for you depending on the number of people that will be attending and what kind of party it is.

Click here to for more information on the room hires.

Below is a vide of a Newcastle stadium tour:

Below is St James’ wiki:

Newcastle’s ground was named St James’ Park because a hospital and church named St. James’ were once located close to where the Hancock Museum building now sits in Newcastle.

Newcastle United do not own St James’ Park Stadium. The owners of this stadium are Newcastle City Council.

What is the capacity of St James Park?

What is St James Park away end capacity?

St James Park away fans end has an allocation of around 3,000.

Which is the away end at St James Park?

At St James Park, away fans are seated in the top tier of the Leazes Stand on the far side.

It is England’s 8th largest football stadium, with a capacity of 52,305 seats.

This stadium has a selection of rooms to hire for any event. However, even if you are not a Newcastle United fan you can still come to visit this ground at the St James Park Stadium tour as this is the perfect day out for you and your family/friends.