Goodison Park, home to Everton FC is an all seater stadium, with a capacity of 40,157.

The south end of the Bullens Road Stand, on the east side of the ground, houses away fans. Designed by celebrated football architect Archibald Leitch, this stand was built in 1926. Originally, the stand had an upper seated area and a lower terrace, known as the Paddock. Seats were installed at the rear of the Paddock in the early 1960s, creating a two-tier all seater stand.

The stadium would lend itself to expansion, but club officials do not consider this financially viable. The proposed “Destination Kirby” project would involve a move to a new stadium in the nearby Borough of Knowsley. However, this project is subject to a public enquiry, the result of which is unlikely to be known until late 2009.

How to Get to Goodison Park

Getting to Goodison Park By Road

Drivers arriving from both North and South can exit the M6 at junction 26, following the M58 to its end. Turn left at the gyratory system, joining the M57 at junction 7. Leave the M57 at junction 4, turning right onto the A580. Continue on the A580 across Queen’s Drive, entering Walton Lane. Goodison Road is a right turn within a mile.

Alternatively, southbound drivers can exit the M6 at junction 26, following the M58 as far as the gyratory system. Turn left onto the A59, following it until it becomes Rice Lane. Continue straight on at the roundabout, into County Road and follow it for about ¾ of a mile. Turn left into Spellow Lane and left again into Goodison Road. The stadium is located on the right.

Northbound drivers can exit the M6 at junction 21a onto the M62. At the end of the M62, turn right into Queen’s Drive and follow it for about 4½ miles. At the roundabout (junction with A59), turn left into County Road, left after about ¾ of a mile, into Spellow Lane and left again into Goodison Road, where Goodison Park is on the right.

Getting to Goodison Park By Rail

The closest railway station to the stadium is Kirkdale, which is less than a mile from the ground.

On exiting the station, turn right and cross the railway bridge. Follow Westminster Road as far as the Elm Tree pub, turning left into Goodall Street. Cross the junction at the end into Harlech Street and follow it as far as County Road. Cross County Road at the traffic lights into Andrew Street, at the top of which the stadium is visible. 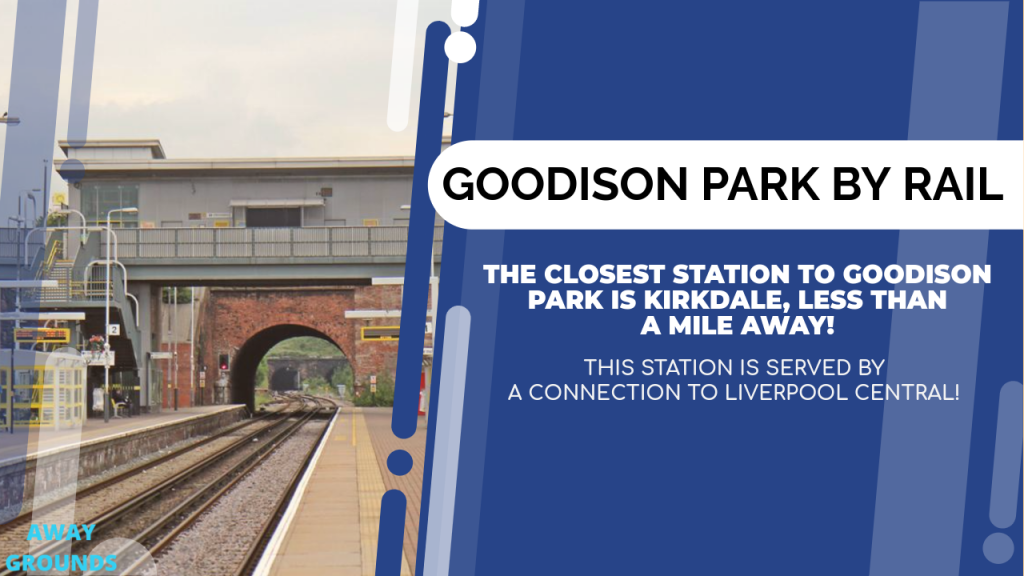 Sandhills station is also convenient and offers a bus service for an hour or so either side of the game. Liverpool’s Lime Street station is over 3 miles from Goodison Park, so it is advisable to catch a connection to Liverpool Central where regular services operate to both Kirkdale and Sandhills stations. Alternatively, the bus station is only a few minutes walk from Lime Street station and well signposted. Click here to check the current train timetables

Getting to Goodison Park By Air

Getting to Goodison Park Taxis

There are several taxi companies in Liverpool that can take you to and from the stadium. You can always prebook a private hire taxi, or hail a black cab on any highway.

Calling all Liverpool Taxi Companies – Why not advertise your company here?.

Where to Park At Goodison Park?

Early arrivals will find on-street parking around the Walton Lane area. Alternative parking is available near Anfield or in Stanley Park, the entrance to which is on Priory Road. 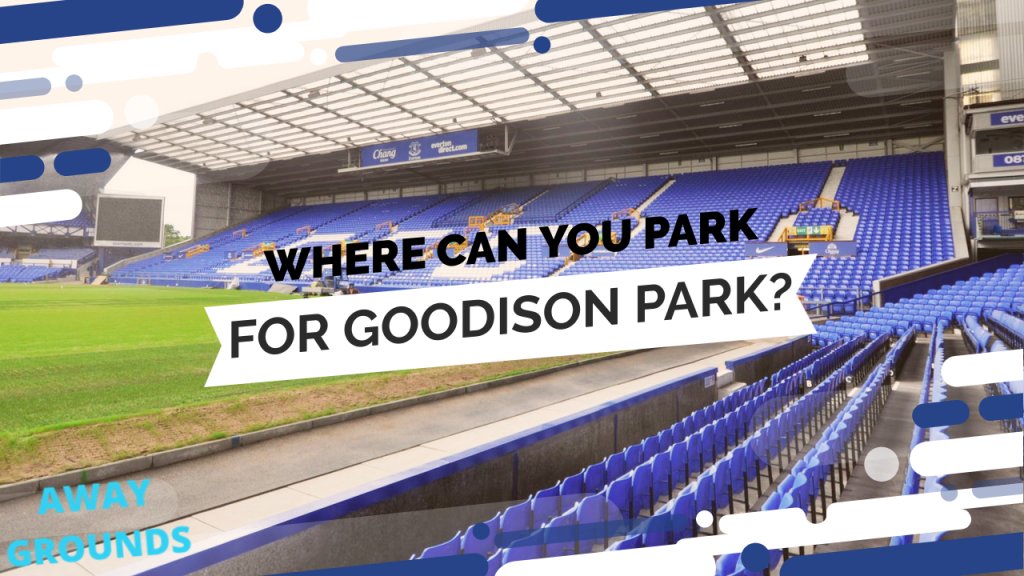 Drivers using the M57 / A580 route (see above) will pass Walton Sports Centre, where parking is also available. This avoids the customary traffic snarl ups at Stanley Park and is within 5 minutes of the motorway.

Getting Tickets For Goodison Park

Becoming a digital member means you get access to buy all tickets and you get many other benefits. 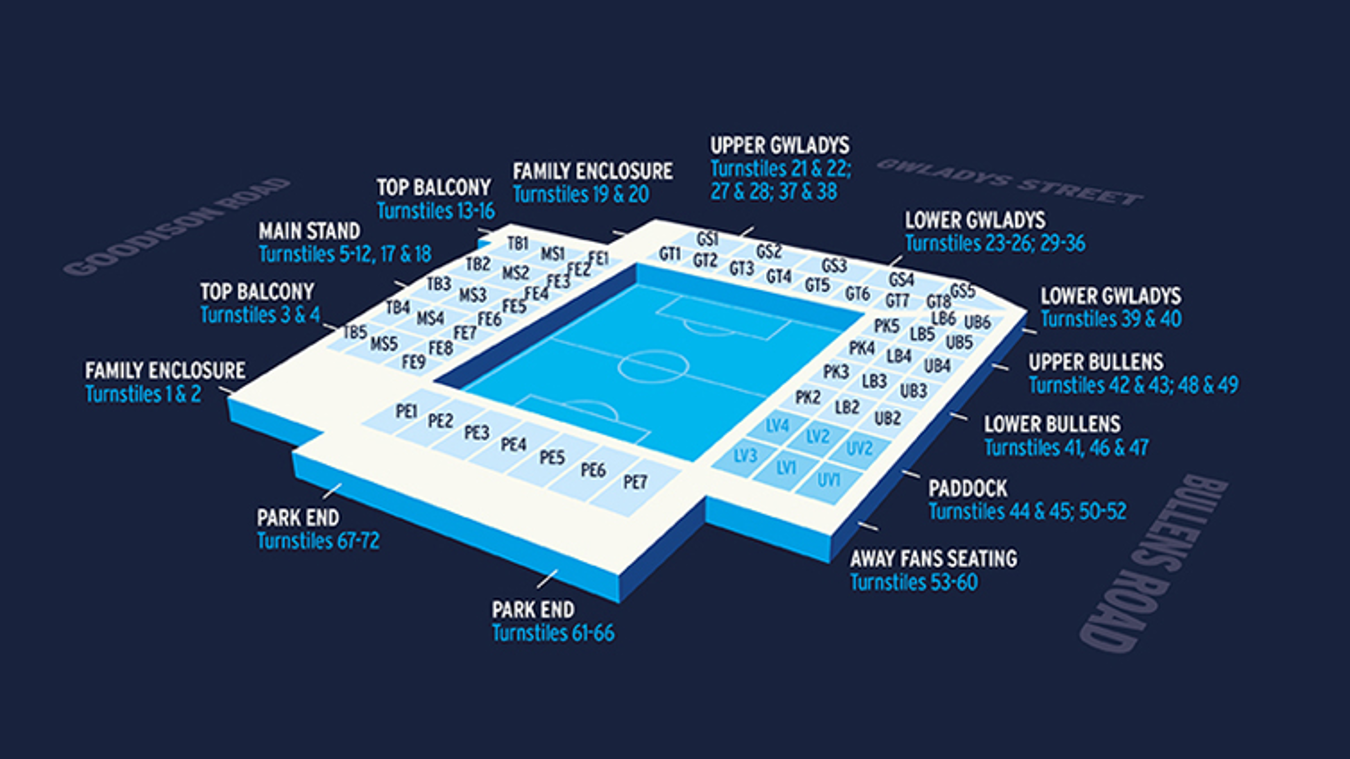 Many hotels near Goodison Park have received mixed reviews from guests.

The Atlantic Tower by Thistle (Right), Chapel Street, Liverpool, L3 9RE has also attracted predominantly favourable reviews. This 4-start hotel is situated in the city centre, adjacent to the Liver Building, within walking distance of many attractions and some 2½ miles from Goodison Park. An NCP car park is available nearby, but this is expensive.

Away Friendly Pubs Near Goodison Park

Numerous visiting fans have recommended Liverpool city centre as the best area for a pre-match drink, as it offers a wide range of outlets to suit all tastes. However, fans report that, with one or two exceptions, the nearest pubs to Lime Street station are those to avoid. The Head of Steam, located at the station, is away friendly and listed in CAMRA’s Good Beer Guide. It also offers a big screen with Sky Sports and Setanta.

Nearer to the stadium, there are a number of recommended away friendly pubs on Walton Road and Walton Lane, only a 10-15 minute walk from Goodison Park. These include the Thomas Frost, a Wetherspoons outlet with a friendly atmosphere and a good mix of home and away fans. Visitors recommend The Spellow, outside the ground, but the Royal Oak is definitely on the list of watering holes to avoid.

What Have Other Away Fans Said About Their Trip to Goodison Park?

Many away fans have remarked upon the friendly, relaxed atmosphere within Goodison Park, with home and away fans mixing freely before the game. The standard of stewarding impressed many visiting fans, who noted that they were reasonable and communicative. Fans have been reasonably impressed with the catering facilities, which offer a good range of food and drink at reasonable (at least for a football ground) prices. 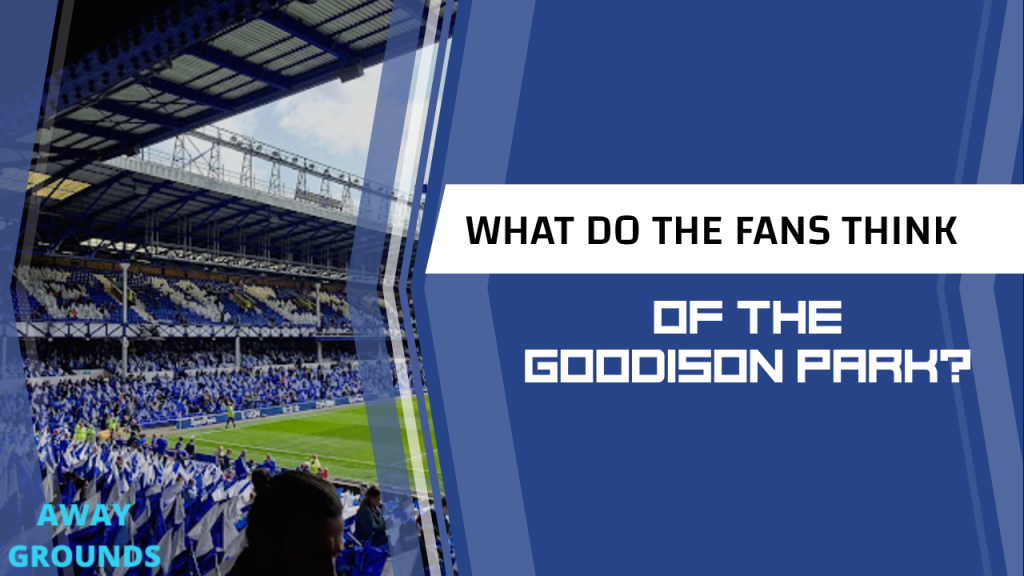 However, one major reported disappointment is that the club refuse to serve alcohol to away fans at half-time. Many visitors have remarked on the overall “tired” look of the stadium, though noting the character the ground maintains. The seating in the rear of the lower tier of the Bullens Road stand has been a major cause for complaint, with supporting pillars interfering with the view of play and little legroom.

I absolutely love this place. Yes it’s a bit dated and not one of the premier leagues generic modern stadiums but the atmosphere around the ground is superb. Love the fan zone in front of the Park Stand. Some of the stands have limited bars/catering areas but the food and drink is pretty decent…. Don’t have too many Chang’s though, it’s loopy juice!!

One of the old school stadiums still remaining. Views not bad from the away end. Small fan park available for food drinks and entertainment. Closest parking is £15! Which is ridiculous and the most expressivist I have come across in the premier league but cheaper ones can be found slightly outside. 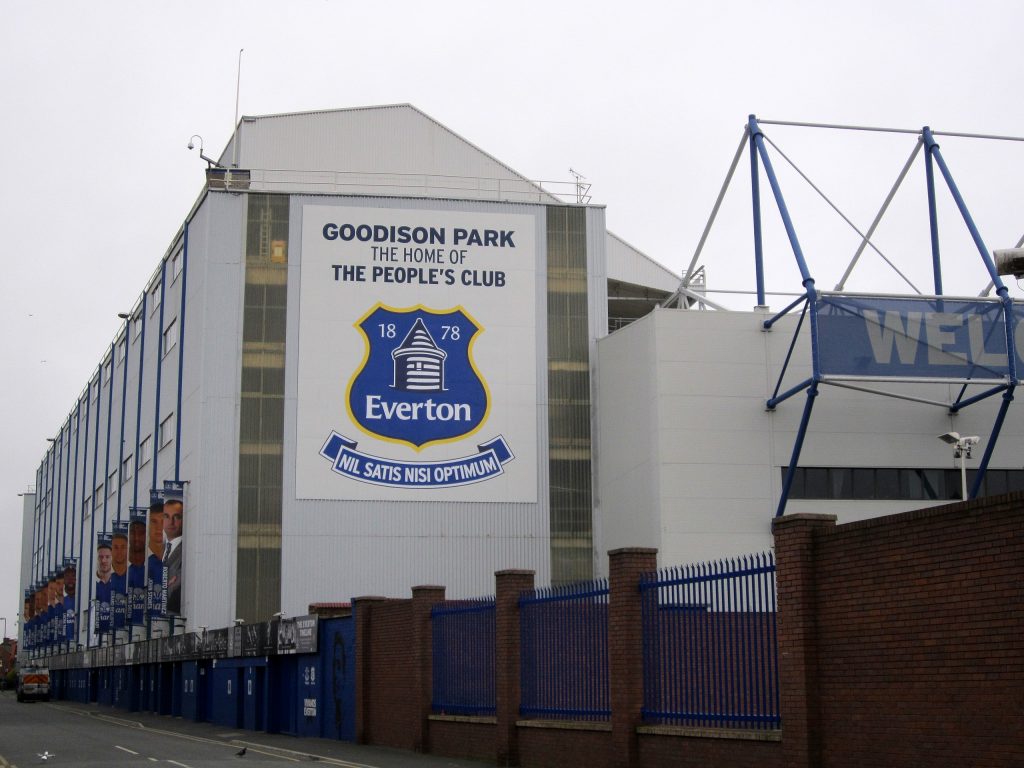 Only Scotland had more advanced sports venues: Rangers opened Ibrox in 1887, while Celtic Park and Goodison Park were both officially opened at the same time.

Everton’s groundbreaking Mere Green stadium was to set the standard for football stadiums across the country. The Blues initially spent up to £3,000 setting out the field and erecting three-sided stands. Kelly Brothers of Walton spent £1,460 on two uncovered stands with seating for 4000 people each and a covered stand with seats for 3000.

The modern-day Goodison Park began to take shape after the turn of the century, with the construction of a £13,000 double-decker stand at the Park End in 1907. The huge Main Stand on Goodison Road was constructed in 1909. It cost £28,000 and contained all of the offices and player facilities until 1971.

The next major change occurred in 1926, when another double-decker, similar to the Main Stand, was built on the Bullens Road Side opposite at a cost of £30,000. Leitch was once again the mastermind behind the project.

The Club made another groundbreaking move a year later, spending £16,000 to install 20 miles of electric wiring beneath the pitch. The system worked well at melting frost and ice, but the drains couldn’t manage the extra water, so the pitch was dug up and new drainage pipes were installed in 1960.

The 1909 double-decker Main Stand on Goodison Road was demolished in 1971 to make room for a vast new three-tiered Main Stand, which opened in 1972. The former stand had cost £28,000 and was seen as massive at the time. The new stand, which cost £1 million and was near twice the size of the old one, was the largest in the country until 1974 when Chelsea unveiled their massive East Stand.

Goodison Park’s capacity was lowered from 56,000 to 35,000 when the Safety of Sports Grounds Act went into force in 1977, owing to outdated entrances and exits. As a result, Everton was forced to spend £250,000 in order to increase capacity to 52,800. In 1986, there were 53,419 people in attendance, with 24,419 of them sitting. Following the Taylor Report, and in the aftermath of the Hillsborough disaster, Goodison Park was converted to an all-seater stadium.

Goodison Park has remained largely unchanged since the development of the Park End stand. The total number of people who can now be accommodated on the ground has increased to 39,572.

Putting sporting events aside, Goodison Park can host almost anything you’re looking for, from weddings to funerals, Christmas parties and conferences.

The Festive Sparkle Christmas Party nights at Goodison Park provide a fun-filled evening with all the trimmings. If you’re looking for something a little less formal, consider the Festive Lounge Bar, which offers street cuisine dining as well as fun and games. There’s something for everyone with a mix of live entertainment and DJ evenings, and if you want to treat yourself to a little VIP luxury, why not join them for their Festive VIP Pre-Party Reception with drinks included?

Prices start at just £35 per person, with a £15 per person deposit necessary to ensure a reservation.

Depending on your style, there is a huge variety of rooms you can choose from for your events and conferences, click here to see the options.

What is the park between Goodison and Anfield?

Stanley Park is the park that divides the two Mersey side rival Liverpool FC and Everton FC.

Where did Everton play before Goodison Park?

When did Everton move to Goodison Park?

Where is Goodison Park?

How far apart is Anfield and Goodison Park?

The distance between Anfield Stadium and Goodison Park is 2 kms or 1.2 miles or 1.1 nautical miles.

What is Goodison Park away section capacity?

At Goodison Park, there is an estimated capacity of 3000 for away fans.

Where do away fans sit at Goodison Park?

Away fans are situated in one corner of the 2 levelled Bullens Road Stand.

This stadium has some amazing history which makes it into the breathtaking stadium that it is today. The stadium offers tours for all the public for £20 and even less for kids!

For a price so cheap yet an experience as great as this, you may as well add this to your ‘things to do’ list as your missing out if you don’t.