After playing the game of football nomads for many years now, Brighton are a club on the up and the stunning American Express Community Stadium is the perfect venue for manager Gus Poyet and his promising side. Having progressed from the Goldstone Ground, through to the Withdean, this ground is far more worthy of this popular south coast side.

The stadium, which is more commonly known as the Amex or in some cases the Falmer Stadium, is a brand new construction that is scheduled for opening in July 2011, just in time for the start of the new 2011-12 season. It is an all seater stadium with an initial capacity of 22,374 which has the ability to be expanded to 35,000 if necessary. It therefore can grow to accommodate any rise in fortunes for this Brighton side.

How to get to the American Express Community Stadium

Getting To Amex Stadium By Road

The Amex stadium is clearly visible from the A27 Brighton bypass which means that it is close to both the A23 and M23 motorways. These will in turn take you into London.

If you’re travelling by car, the postcode for your SatNav is BN1 9BL.

Getting To Amex Stadium By Rail

Trains into Brighton Station are plentiful and run on a regular basis from London Victoria. From there, it is possible to walk to the ground or you can hire a taxi but these will naturally be at a premium on match days. Click here to check the current train timetables

Getting To Amex Stadium By Air

Brighton is served by an airport at Shoreham which is located a few miles outside of the town. From here it is possible to arrange a taxi or car hire to the ground or a shuttle service into Brighton itself. Click here to check the current flight times 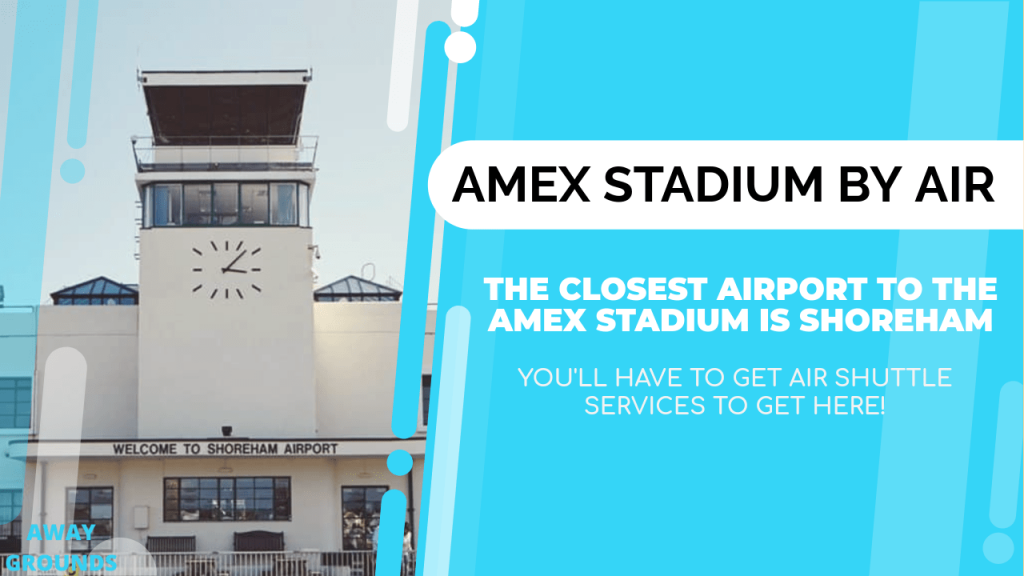 While the airport here is very small, if you cannot find a direct flight, there are many air shuttle services between here and all of the major terminals at nearby Gatwick.

Getting To Amex Stadium Taxis

There are several taxi companies in Brighton that can take you to and from the Amex Stadium. You can always prebook a private hire taxi, or hail a black cab on any highway.
Calling all Brighton Taxi Companies – Why not advertise your company here?

Where to Park Near Amex Stadium?

While there is parking available at the stadium, this is restricted to club officials and disabled drivers. There are over 150 spaces but unless you have a disabled badge, there is very little chance of finding a space on match days. There are however over 200 cycle spaces at the ground itself and cycling to the Amex could be an ideal alternative option. 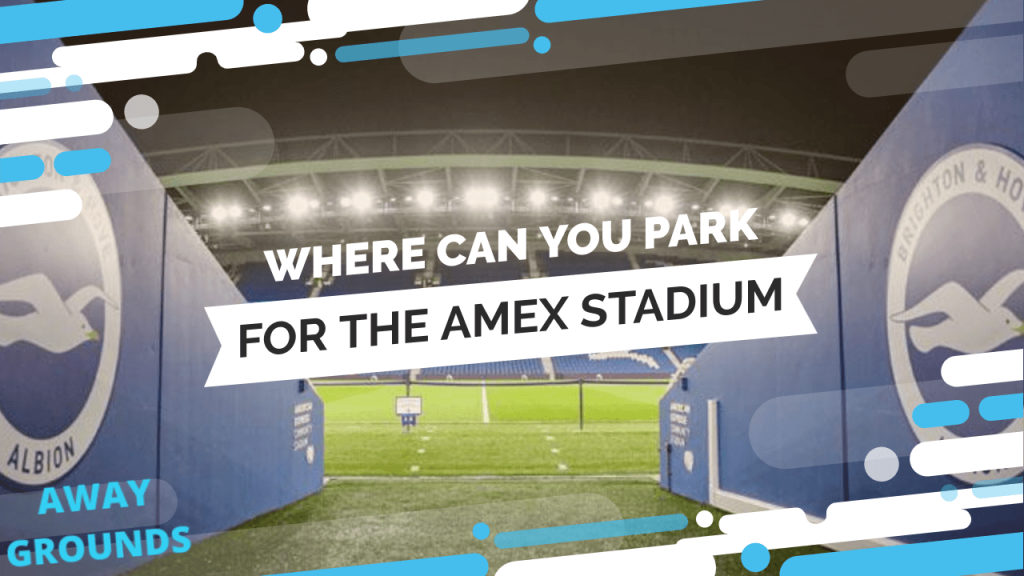 Parking close by is limited but private parking schemes and local schools may open their doors as the ground itself gets ready for action.

As the stadium ‘beds in’, local parking schemes will become more widespread but in the early stages it would be useful to check in advance. One thing that is already known is that the stadium will be served by a ‘park and ride’ facility and this is likely to be the most popular form of arrival.

Getting Tickets For Amex Stadium

Unless otherwise noted, all home first-team games are offered one ticket per fan number. All on-sale dates start at 9 a.m., and tickets may only be purchased online. They do not take phone or in-person reservations.

We recommend that you reserve ahead of time to ensure that you obtain a ticket because they sell out quickly. If you don’t obtain one in time, you can look at the resale listings on the website. 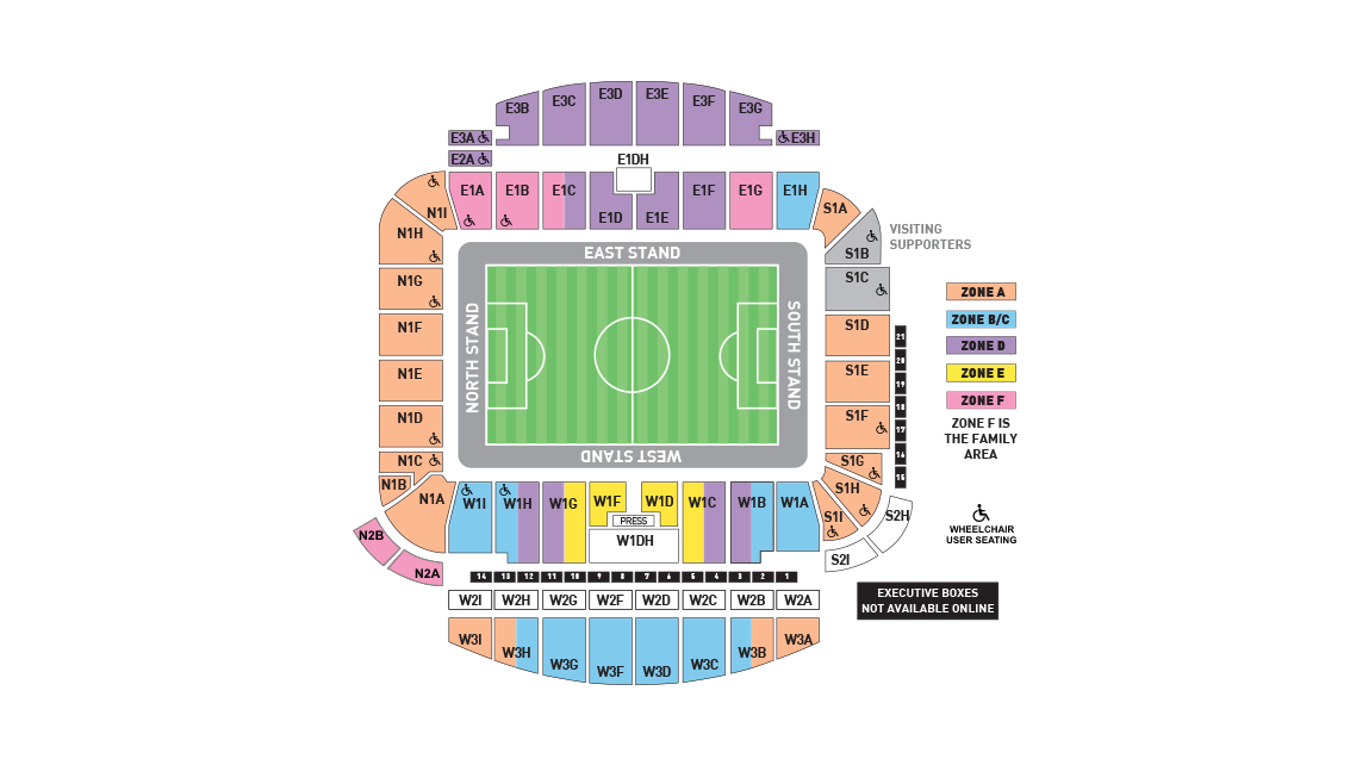 Away Friendly Pubs near the American Express Community Stadium

While the pubs in Falmer await the rush of football supporters to the new Amex stadium, few of these hostelries have any sort of reputation when it comes to being ‘away’ friendly.

Of the pubs in the area, The Swan Inn in Middle Street is the closest to the ground itself and it should be large enough to cope with the away support, however it was used as a base for residents campaigning against the building of the stadium, so football fans may not be welcome there, and you may well wish to take your business elsewhere anyway given their previous stance.. 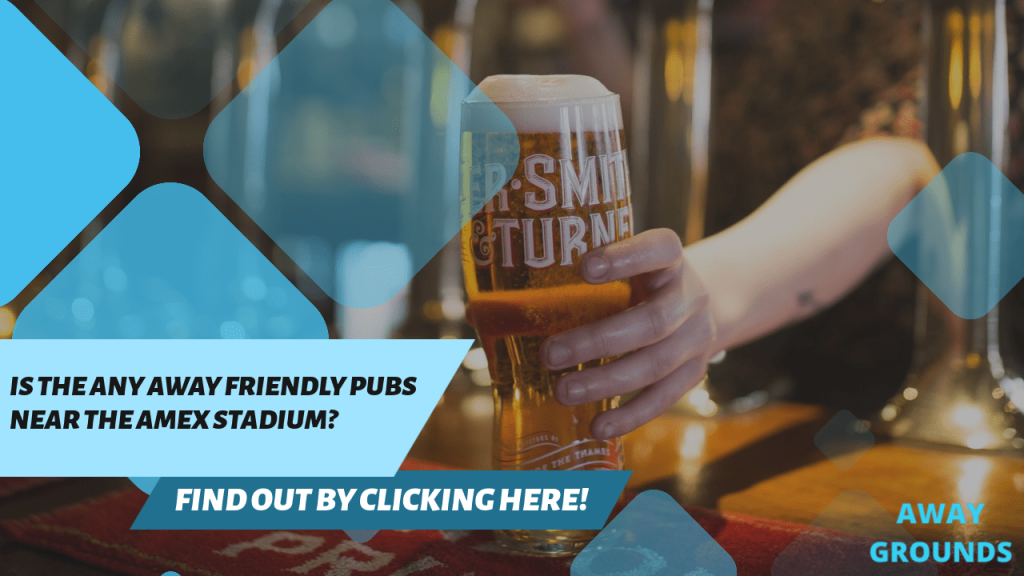 You could always enjoy a drink in Brighton itself at pubs with more of a history of catering for away fans and these could include Bar 14 or the Basketmakers Arms both of which are close to the town centre.

While the Brighton district of Falmer may not be densely populated with hotels, there is an abundance to choose from in Brighton itself.

The Hilton Brighton Metropole is one of the most popular destinations in the town and it is ideally located right by the seafront.

The Holiday Inn Brighton is also favoured by visitors to the area and like the Hilton and the Best Western, it too has a seafront location which makes it popular with football fans and tourists of all kinds.

First sightings of the Amex stadium show it to be an intriguing prospect and it certainly looks to be among the most impressive grounds anywhere in England.

Innovation plays a major part too at the Amex with Smart Cards available that can allow the user to pay for their tickets as well as food and drink within the stadium. Whereas this may be of more interest to the home supporters, this system should achieve its intended purpose of making queues in and outside of the ground much shorter. 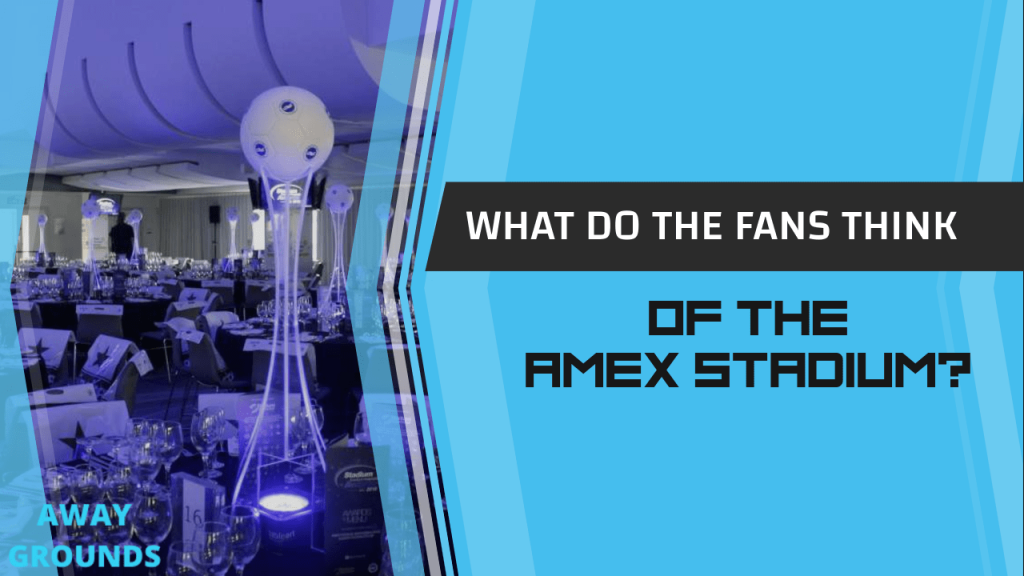 Additionally, waiting time for entry and indeed to be served inside the stadium should be significantly reduced.

Overall, The Amex is an exciting prospect and worthy of Brighton’s march up the league.

One of the nicest and biggest stadium’s in the UK that I have ever seen even since this is located close to Brighton and Lewes for the B&H Albion football fans and you can travel directly by bus or train from Central Brighton. Giving this 5 stars and a solid 9.5 out of 10.

Lovely stadium built with financial help from the EU. Very nice both outside and inside and with a good atmosphere created by the BHA FC fans. Been there on one occasion, their Premier League game against Everton and the staff was very friendly and helpful.

The design of the stadium and the outside view of the arena makes it a must see for any groundhopper.

The Amex, formally known as the American Express Community Stadium and also known as Falmer Stadium, opened on July 30, 2011, with a friendly match between Brighton and Tottenham Hotspur (2-3).

After the previous chairman Bill Archer sold the Goldstone Ground to property developers in 1995, Brighton began planning the construction of a new stadium.

When Brighton became homeless, they shared a ground with Gillingham for two seasons before moving to the Withdean Stadium, a Brighton athletics stadium that, despite being refurbished, lacked the contemporary facilities required for League football.

Due to several legal issues, Brighton did not receive planning authorization until 2007. Construction on the stadium began in 2008, and the club announced a naming rights sponsorship arrangement with American Express in 2010.

The Amex was built with the intention of easily expanding to 30,000 seats, and the club began preparations for expansion in December 2011.

Brighton secured planning approval in early 2012, and before the start of the 2012-13 season, an additional 5,000 seats were added by adding a second tier to the East Stand and sealing the corners of the South Sand. Brighton added 3,000 seats in early 2013 to bring the total capacity to 30,500, which was increased to 31,800 in 2021 after minor adjustments.

Amex Stadium can hold many events and functions such as weddings, Christmas parties and meetings although it is mostly known to hold many football matches.

Amex Stadium is a perfect location for any event with its award-winning catering services and plenty of free parking available making it easier for you and any guests you have attending.

Below are the prices for the Amex Stadium tour:

(This tour lasts between 1-2 hours)

The Amex Stadium is owned by The Community Stadium Limited.

How old is AMEX stadium?

Where are the toilets in the Amex stadium?

Can the Amex Stadium be expanded?

The AMEX Stadium can be expanded. American Express Community Stadium have been given planning permission to expand the seats to 32,500, there are also plans to create an outdoor fans area with a kiosk and external toilets.

What was Brighton's old ground called?

Brighton Albion Football Club used to play at The Goldstone Ground (or The Goldstone) prior to playing in the AMEX Stadium.

Which is the away end at Amex Stadium?

Away supporters visiting Brighton’s stadium are seated in the AMEX stadium’s southeast corner. This area includes not just the corner section, but also the lowest tiers of the East and South Stands.

What is Amex Stadium away end capacity?

Around 3,300 fans can be accommodated in the away end at Amex Stadium.

This famous stadium is owned by The Community Stadium Limited and operated by Brighton & Hove Albion Football Club.

Many fans and previous visitors have spoken very highly of this stadium for its amazing match days with an excellent atmosphere and amazing facilities.

If you have not yet visited the American Express Community Stadium then you should definitely plan a tour to be a part of the great experience.