Elland Road, home to Leeds United is an all-seater stadium, with a capacity of 40,204.

The Revie Stand, named after the club’s most successful manager and former player, occupies the North end of the ground. Formerly a standing terrace, it had 7,000 seats installed prior to its re-opening for the 1995-96 season. The East Stand runs the length of the east side of the pitch and is the most recent stand in the stadium. The two-tiered structure was opened during the 1993-94 season with a build cost of £5.5 million.

The South Stand is situated behind the goal at the south end of the ground. It was built in 1974 at a cost of £500,000 to replace the Scratching Shed, which had been there since the 1920s. It comprises two small tiers intersected with a row of 32 executive boxes and an executive restaurant. The South-East Corner seats 1,710 fans and is usually used to house the away fans. The John Charles Stand runs the length of the west side of the pitch and houses the players’ tunnel and Directors’ box, along with corporate hospitality facilities.

How To Get To Elland Road?

Getting To Elland Road By Road

For satnav purposes the postcode of the Elland Road Stadium is LS11 0ES.

From the North, follow the A58 or A61 into the city centre then follow signs for the M621. After 1½ miles, exit the motorway, joining the A643 and following it into Elland Road. Having passed the ground on the right the entrances to the club car parks become visible.

Drivers coming from the South should follow the M1, exiting onto the M621. Having passed the ground on the left, leave the motorway at the next exit and turn left onto the ring road (A6110). Elland Road is the first right turn. The car park entrances are on both sides of the road just after the railway bridge.

Getting To Elland Road By Rail

Leeds train station is around a 35 minute walk from the station. However, a shuttle bus service operates to the ground from near the station. 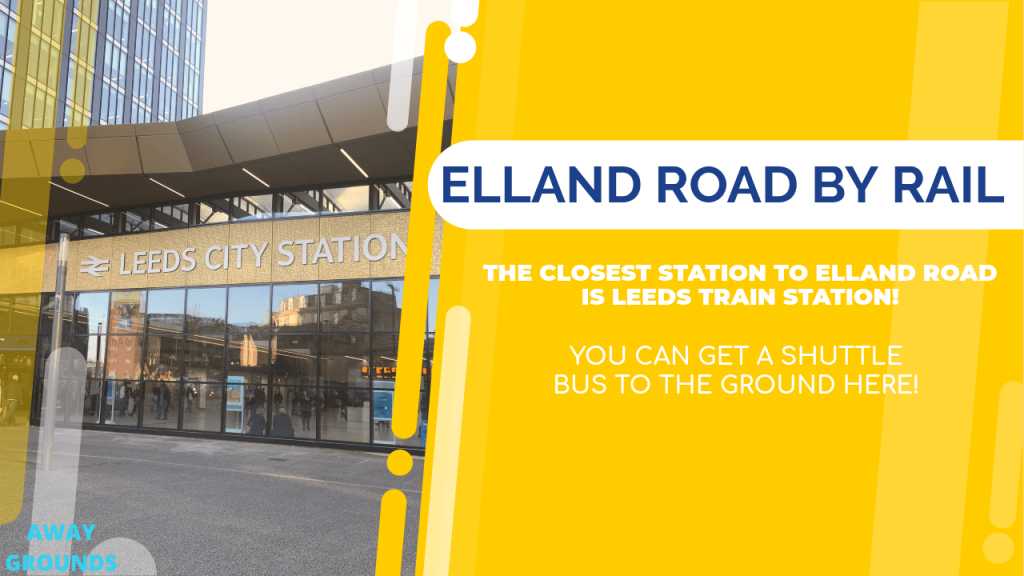 On exiting the station, cross the road and take the steps to the street below. Turn right and cross the road, where a row of double-decker buses will be waiting. The shuttle bus service picks up and drops off at the corner of the Revie (North) and East Stands. Click here to check the current train timetables

Getting To Elland Road By Air

Leeds Bradford airport is the nearest, at a distance of about 7 miles. There are regular bus and rail links from the airport to Leeds city centre. Click here to check the current flight times

Getting To Elland Road By Taxis

There are several taxi companies in Leeds that can take you to and from Elland Road. You can always prebook a private hire taxi, or hail a black cab on any highway.

Calling all Leeds Taxi Companies – Why not advertise your company here?.

Where to Park At Elland Road?

The club has ample car parking facilities at the ground (see “By Road,” above). 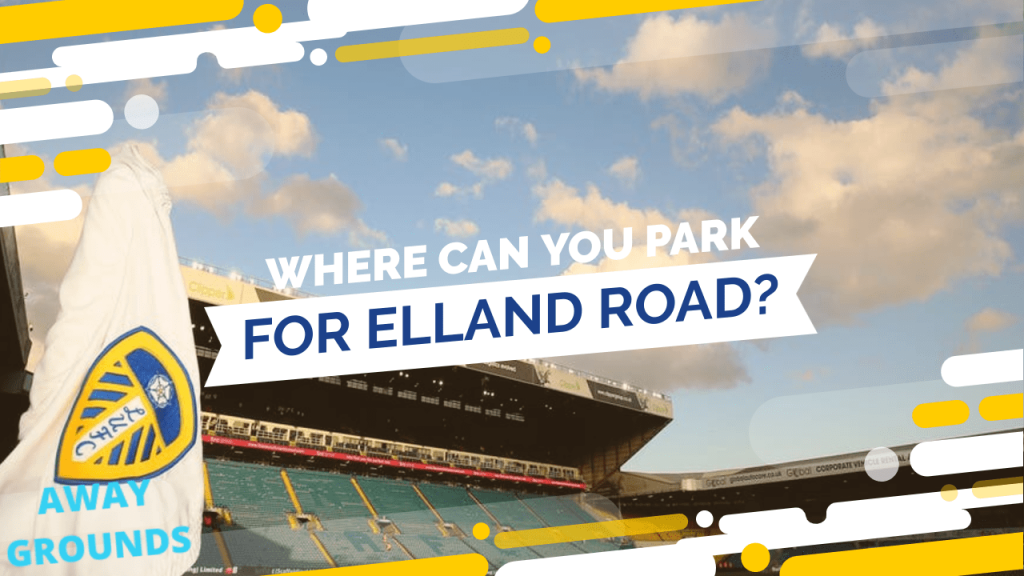 Most visiting fans recommend car park “A” for a quick getaway following the match.

Getting Tickets For Elland Road

Elland Road ensures that all members have equal access to tickets and that we maintain our commitment to making football affordable while remaining competitive on the field in the long run.

Adult, Under-11, Under-16, 16-18 years, and Concessions are the five price bands that apply to the following sections of the stadium: Family Stand, North and South Stands, East Stand Upper Wings (adult tickets only), and East Central Lower with East Stand Upper and West Stand. 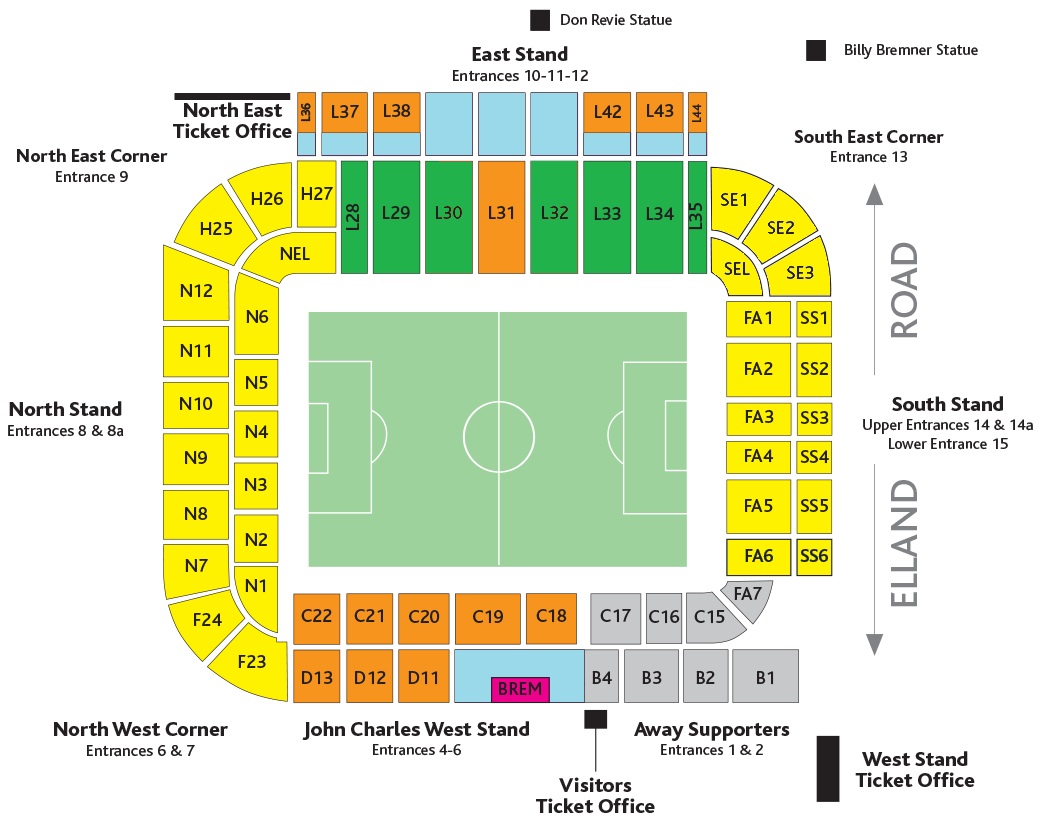 Away Friendly Pubs Near Elland Road

The nearest pub to the ground, the Old Peacock, behind the South Stand should be avoided. 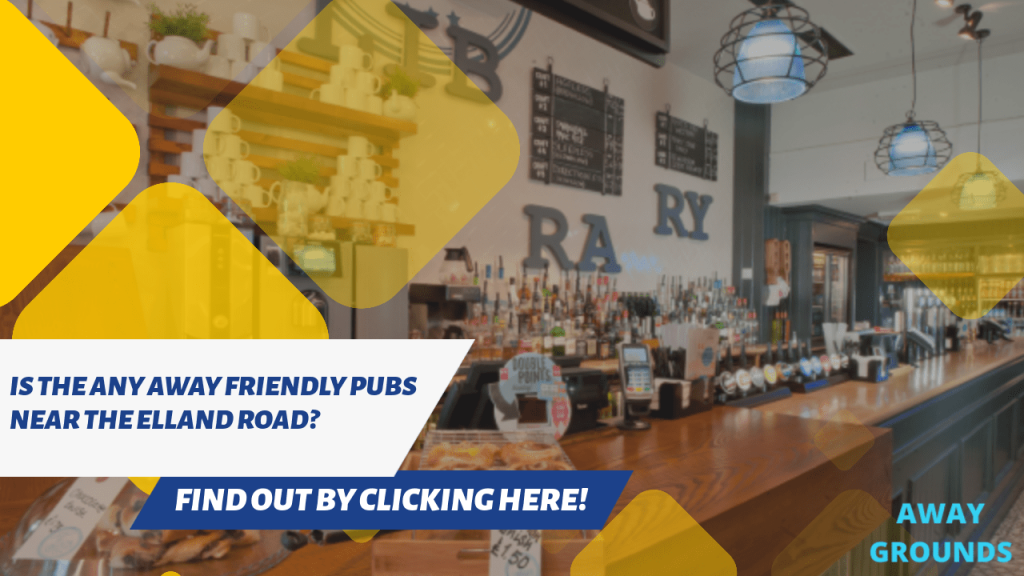 However, the Drysalters, a 10-minute walk from the ground, offers a friendly welcome to away fans, competitively priced beers and large screen Sky TV.

The Hilton Leeds City, Neville Street, Leeds LS1 4BX is adjacent to the railway station, with quick and easy access to the M621. Guest reviews suggest that it provides excellent value and is just 1½ miles from the Elland Road ground.

What Have Other Away Fans Said About Their Trip to Elland Road?

The majority of away fans have reported Elland Road as an enjoyable day out. However, many have reported trouble at cup ties against local rivals and appropriate caution is advised in and around the ground. 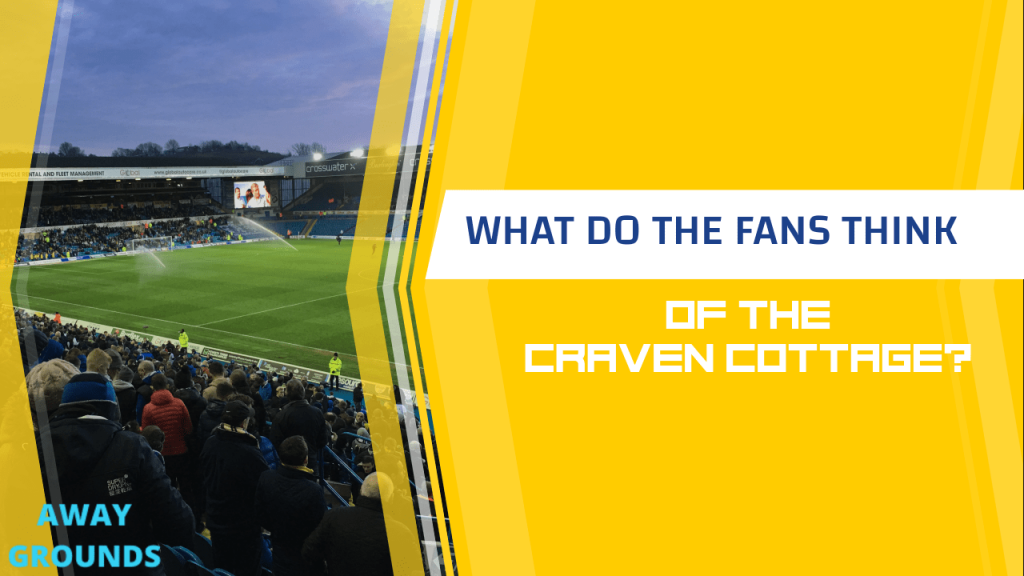 Visitors have complained that facilities within the away section are basic and seats have little legroom. Stewards are reported as being “over the top,” ejecting fans from the ground for swearing, without prior warning.

A landmark of Leeds which holds much history, celebration, victory and honour. Home to Leeds United FC, Elland Road runs like a fine tuned classic car.
Plenty of parking (charges apply but not extortionate) ; disabled parking and access available. When Elland Road is not hosting football matches, its home to many concerts and not forgetting the yearly Valentine’s fair. The banqueting suite is available to let and is of very large capacity, self contained with its own bar and toilets. Leeds would not be Leeds without Elland Road!

100 years of history, the place as got real feel about it and the stadium and the atmosphere inside is electric, there is plenty of parking close to the ground where you can park all day for a wonderful price, I was presently surprised about the cost were most other grounds charge silly amounts of money. There was number of local pubs including the Peacock just over the road, also plenty of places to eat to cover everyone’s taste, fantastic.

Will Elland Road be expanded?

Yes, Elland Road have had their planning permission approved it is expected to expand the seating to 55,000 seats in total.

How old is Ellen road?

What is the name of Leeds United stadium?

The stadium that Leeds United play in is called Elland Road.

What is Elland Road away end capacity?

At Elland Road, the typical upper-tier capacity is 1,566 seats, with an additional 1104 seats available in the lower tier if needed, for a total amount of 2,670 seats.

Which is the away end at Elland Road?

Away supporters visiting Elland Road sit in the upper deck of the John Charles Stand on one side.

Elland Road had the most pricey floodlights of the time in 1953, costing £7,000. The inaugural floodlit game was against Hibernian, with almost 31,500 spectators in attendance to enjoy the warm glow. Leeds won the game 4-1, with John Charles scoring two goals.

In 1956, tragedy struck Elland Road when the West Stand was completely destroyed by fire. The fire consumed the whole structure, including offices, the press box, and club documents. The overall cost of the damage was estimated to be around £100,000. The club’s insurance turned out to be woefully inadequate, prompting the board to call a public financing plea during a crisis meeting. The appeal raised £60,000, and with the support of Leeds City Council, a £180,000, 4,000-seater structure would be unveiled at the start of the next season.

The next major construction of Elland Road did not occur until 1991, when the South-East corner was inaugurated. The ‘cheese wedge,’ so named because of its unique yellow seats, now serves as the away fans’ section, but it was once the family stand. The banqueting suite behind the West Stand, equipped with its own conference centre, was opened during our 1992 title-winning season.

The new two-tier East Stand, which opened in 1993, was the most significant change. It was the world’s largest cantilever stand, with a capacity of 17,000 people. It housed Elland Road’s family stand, which included 25 extra-executive boxes.

Following the Taylor Report’s recommendations, Elland Road was converted to an all-seater stadium in 1994. The ‘Gelderd End’ or ‘Kop,’ which was officially reopened by the widow of Don Revie and named after our greatest ever manager, was the final renovation. The North Stand would be dubbed ‘The Don Revie Stand’ from then on. 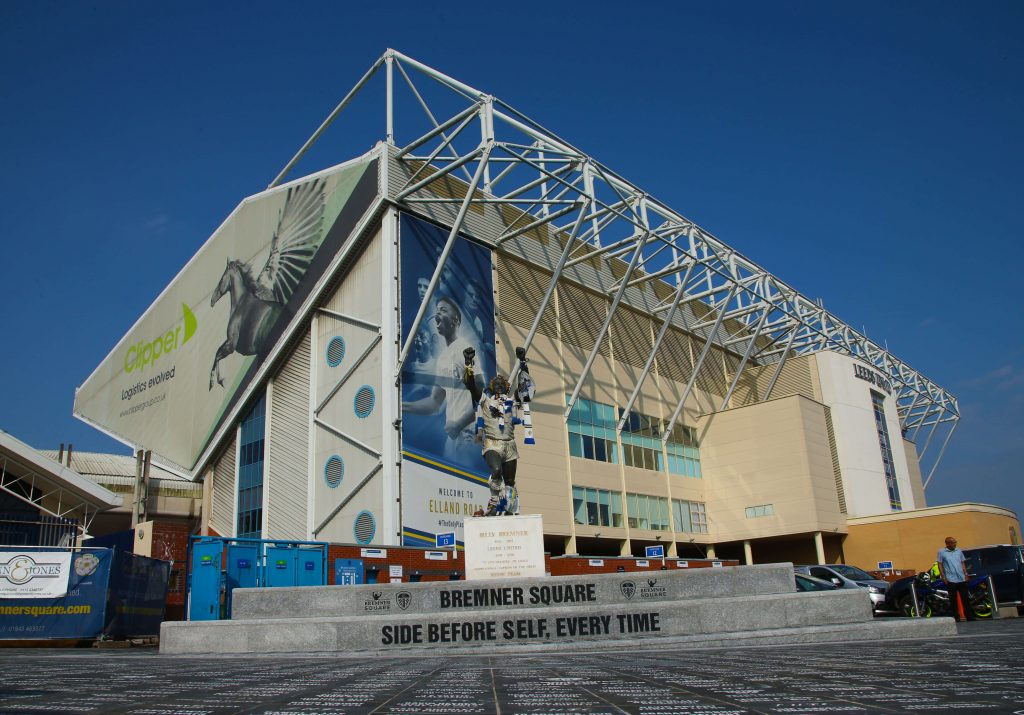 Elland Road can hold a variety of events, from sold-out pop concerts within the stadium to intimate one-on-one business meetings – they can accommodate your every requirement.

With approximately 2000 square metres of area, the Centenary Pavilion is one of the largest conference and events venues in the north of England.

You can enjoy a day out at the Elland Road Stadium by attending the amazing tour or having the stadium host one of your events such as a conference or wedding.