The Hawthorns is an all-seater stadium with a capacity of 28,003. It has been the home of West Bromwich Albion F.C. since 1900. In the advent of the Taylor Report, the Smethwick End and Birmingham Road End terraces were demolished, being replaced by all-seater stands. The redeveloped stadium was re-opened on Boxing Day 1994.

In 2001, the Rainbow Stand was replaced by the new East Stand. The Jeff Astle gates, commemorating West Brom’s greatest striker, were unveiled in July 2003, forming the entrance to the East Stand car park. In December 2003, the directors unveiled plans to increase the stadium’s capacity to 40,000 but these are unlikely to go ahead unless Albion establish themselves as permanent members of the Premier League. Away supporters occupy part of the Smethwick End Stand, behind the goal at the South End.

How to Get to the Hawthorns

Getting to The Hawthorns By Road

The Hawthorns is situated in Halfords Lane, West Bromwich, West Midlands B71 4LF.

From the North, follow the M6 as far as junction 8, joining the M5 (signed Birmingham (S) /Birmingham (W) / M5 / W Bromwich. Exit the M5 at junction 1 towards A41 / Birmingham (NW) / W Bromwich / Sandwell. Turn left onto the A41. Turn right at Halford’s Lane and the stadium is on the left.

From the South, exit the M5 at junction 1, towards A41 / B’ham (NW) / W Bromwich. Merge onto the A41. Turn left at Halford’s Lane and the ground is on the left. The map below can provide directions from all UK locations and is useful for locating parking and recommended pubs.

Getting to The Hawthorns By Rail

The closest station is The Hawthorns, within a 5-minute walk of the ground. 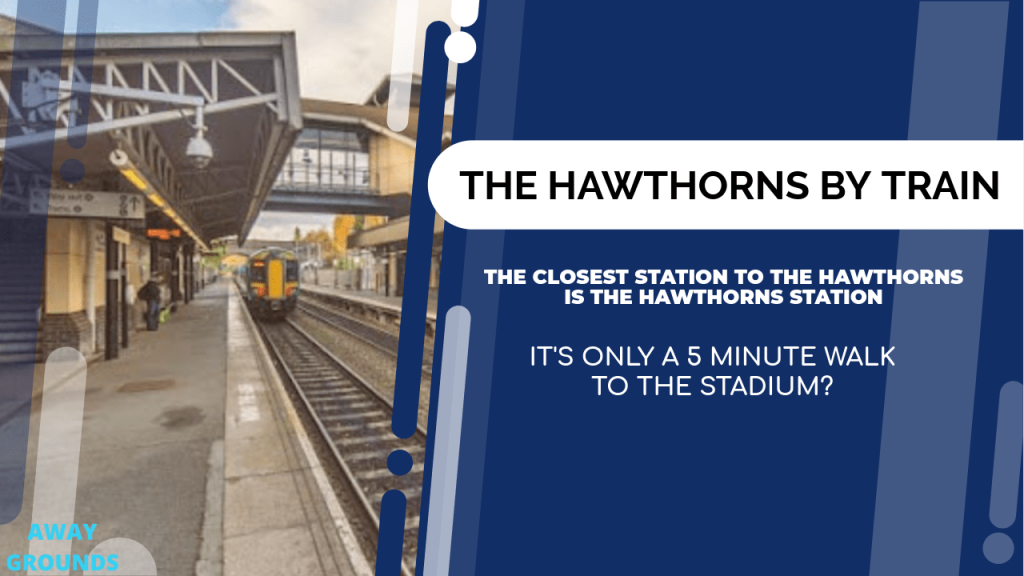 It is served by a regular Metro service from Birmingham Snow Hill, with a journey time of about 8 minutes. Click here to check the current train timetables

Getting to The Hawthorns By Air

The closest airport is Birmingham International, some 16 miles away, offering regular connections to Birmingham New Street station, which is only a short walk from Birmingham Snow Hill (see above). Click here to check the current flight times

Getting to The Hawthorns By Taxis

There are several taxi companies in the West Midlands that can take you to and from the stadium. You can always prebook a private hire taxi, or hail a black cab on any highway.

Calling all West Midlands Taxi Companies – Why not advertise your company here?.

Where to Park at the Hawthorns?

There are a number of private car parks within walking distance of The Hawthorns. These include The Hawthorns Pub, Birmingham Road B71 4JZ with 80 spaces and a 1-minute walk from the stadium. After exiting the M5, take the A41 towards Birmingham and the car park is on the right just before the stadium. Gordon Motor Services, Dartmouth Road, B66 1BG has 100 spaces and is a 10-minute walk from the ground. 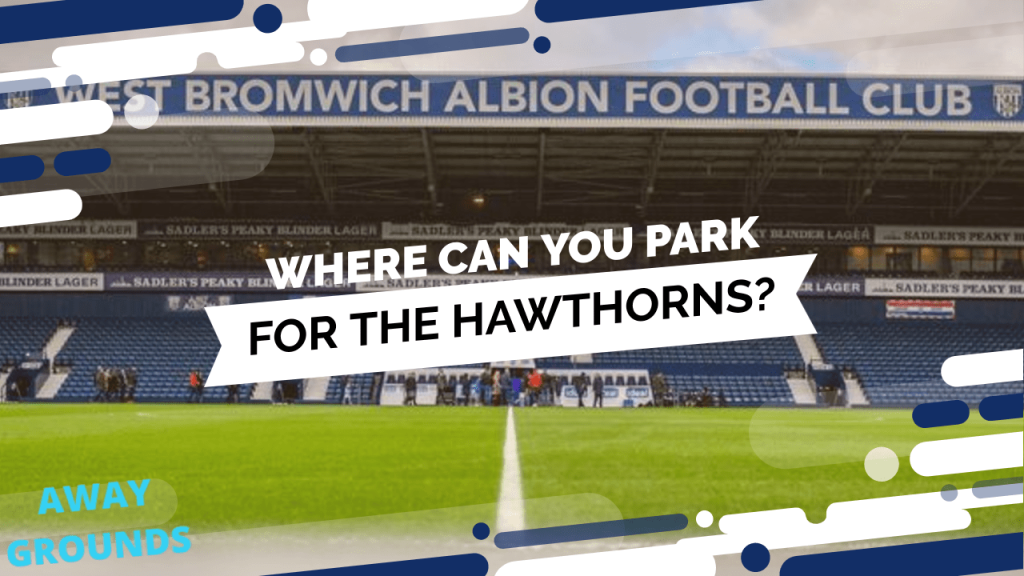 If travelling from the North, exit the M5 at junction 1, taking the 2nd exit at the roundabout onto Kendrick Way (A252), signed Oldbury / Smethwick. At the next roundabout, take the 1st exit onto Dartmouth Road (signed Hawthorns Park & Ride). The car park is on the left just before the traffic lights.

From the South, leave the M5 at junction 1, take the 5th exit at the roundabout and follow directions as for North. West Midlands Fire Service Training Centre, Dartmouth Road, B66 1BG, has 200 spaces and is a 15-minute walk. Directions are as for Gordon Motor Services but the car park will be on the right.

Getting Tickets For West Brom

West Bromwich Albion tickets can be purchased online, over the phone or at the stadium’s ticket office.

If tickets are still available on game day, they can be purchased at the stadium’s ticket office. West Brom’s attendance has declined in recent years, and tickets for most matches will be easy to come by if purchased in advance or even on the day.

West Brom has set three ticket pricing categories, with each seat in the stadium costing the same. Category A tickets, which are the most expensive, cost £39.00 for all stands, while Category B tickets cost £30.00 and Category C tickets cost £25.00. 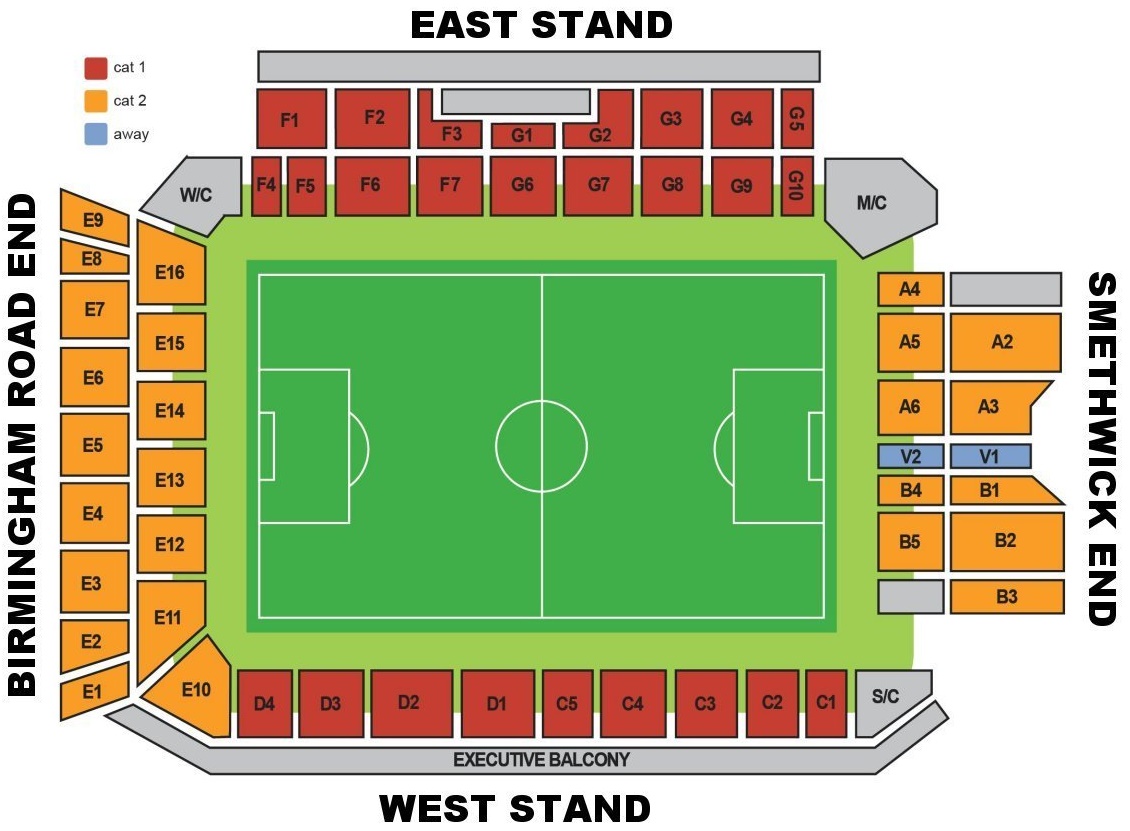 Away Friendly Pubs Near the Hawthorns

There are no pubs for away fans close to the ground. Numerous visiting fans have recommended The Royal Oak, on Birmingham Road. Pass the ground on the right and the pub is set back off the road after about ½ a mile. The atmosphere is reported as extremely friendly and the chicken kebabs are apparently superb.

Also strongly recommended is The Vine, about a 20-minute walk from the ground. It can be reached from junction 1 of the M5 by turning left towards the town centre and taking the first left into Roebuck Street. The pub offers an excellent atmosphere, with a good range of beers and an indoor tandoori barbeque. 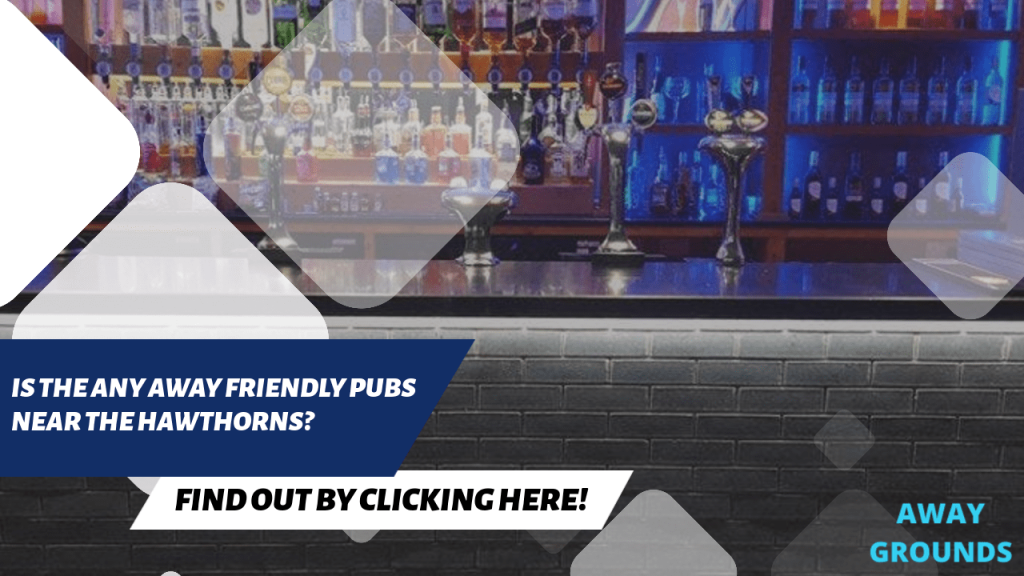 Closer to the town centre, the Asian-run Desi Junction offers an “eat as much as you like” buffet for a fiver on match days. Alcohol is also available within the ground, but queues are lengthy.

Hotels Near the Hawthorns

The Park Inn West Bromwich, Birmingham Road, West Bromwich, B70 6RS is just over ½ a mile from the stadium, 4 miles from Birmingham city centre and close to M6, M5 and M42 junctions. Guest reviews have been generally favourable for this refurbished hotel, with bar / restaurant, air-conditioned gym and heated indoor swimming pool. Free on-site parking is available.

The West Bromwich Central Premier Inn (pictured right), High Street, West Bromwich, B70 6JJ is just over a mile from The Hawthorns, offering comfortable en suite accommodation with a prime city centre location, only 500 yards from junction 1 of the M5 and close to junction 8 of the M6. Guest reviews have been excellent, noting excellent facilities, knowledgeable, friendly, efficient staff and a good selection of quality food and drink.

What Have Other Away Fans Said About Their Trip to the Hawthorns?

Many visiting fans have noted the Hawthorns as one of the easiest Premiership grounds to find and park nearby. Most visitors have found home support friendly and welcoming. The facilities and view of play in the Smethwick end are reported as adequate, though seating legroom is cramped. 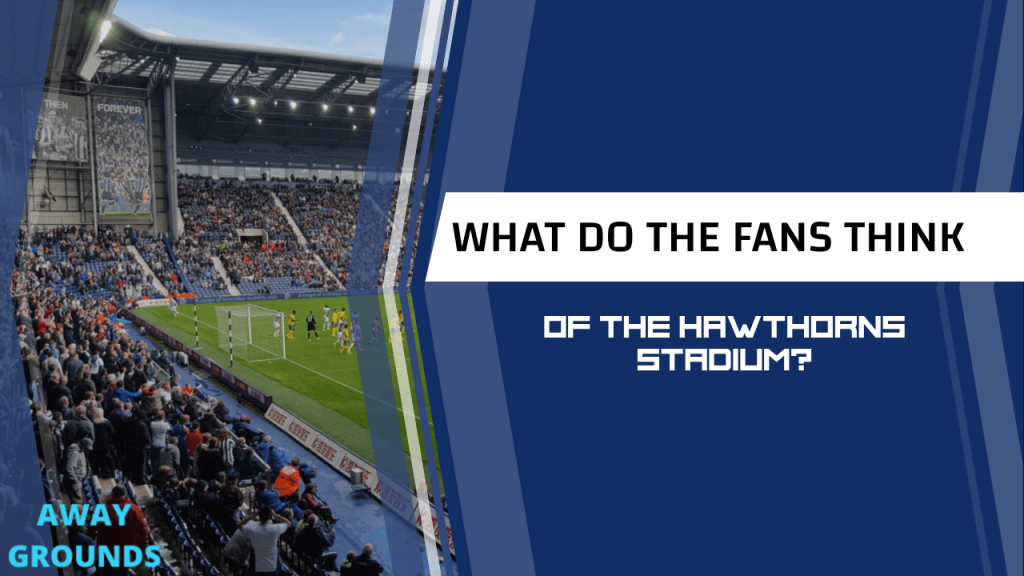 A constant cause for complaint is the concourse at the rear of the Smethwick End, which is too small compared to the overall capacity, making it cramped and overcrowded. The food and drink offered is reported as excellent, but serving areas are too small, leading to lengthy queues. Other downsides include a lack of atmosphere and overzealous stewarding.

Outstanding modern stadium with great history and a family atmosphere. Attended the Wigan match and enjoyed every minute. The fan zone area is something that every decent football team should have. There was a good variety of food and drink on offer at halftime.

The Hawthorns first hosted a match on September 3, 1900, between West Bromwich Albion and Derby County (1-1). It had only taken four months to build, and the stadium could hold 35,500 spectators.

West Brom had a 14-year lease at first but gained the freehold in 1913. The club gradually began extending the stadium as finances from on-field success flowed in. New concrete terraces were added in 1920, increasing the capacity to 65,000 people.

The Hawthorns’ greatest crowd was 64,815 in 1937 when West Bromwich Albion played Arsenal.

Until the construction of a new East Stand in 1964, only minor changes were made in the following decades. Because of its 4,000 brilliantly coloured chairs, the stand was quickly dubbed “The Rainbow.” After that, a portion of the old East Stand was used to construct a new stand at the Birmingham Road End.

The Halfords Lane Stand had fallen into disrepair by the late 1970s, and a new stand was built in its place during a three-year period.

The stadium was renovated to an all-seater in the 1990s, following the Hillsborough catastrophe and the Taylor report. As a result, the two terraces at the ends were demolished and replaced with two new all-seater stands.

The Hawthorns had its final transformation in 2001 when the Rainbow Stand was destroyed and replaced with a new East Stand.
West Brom has been looking into expanding The Hawthorns to a capacity of over 30,000, most likely by adding an extra tier to the West Stand (Halfords Lane Stand), but these plans have been put on hold for the time being due to the club’s inability to consistently sell out its current capacity.

Outside The Hawthorns Stadium 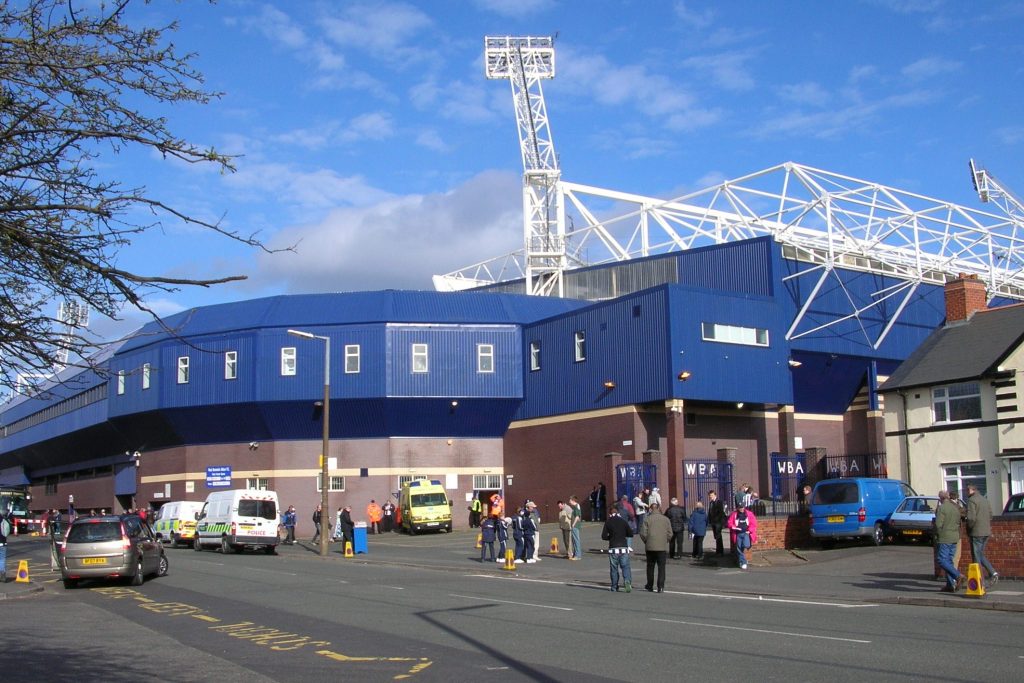 Events at The Hawthorns

The Hawthorns, in the West Midlands, is the ideal location for conferences of up to 300 people.

Small, medium, and large conferences can all be accommodated in a variety of suites. A dedicated team of Conference and Events professionals will be on hand to help you find the best solution for your business requirements.

Their chefs can provide a choice of catering alternatives to meet your event’s needs. From sit-down meals to hot fork and finger buffets to more simple solutions, there’s something for everyone.

Why is West Brom ground called the Hawthorns?

The Hawthorns got their name from the hawthorn bushes that were destroyed to make room for the new ground.

What is the capacity of the Hawthorns?

Does the Hawthorns have underground heating?

The answer is yes, the Hawthorns do have underground heating.

What is The Hawthorns away end capacity?

At The Hawthorns, the capacity for away fans is around 3000.

Which is the away end at The Hawthorns?

Away fans attending The Hawthorns are near the East Stand on one side of the Smethwick End.

The Hawthorns is the home ground to the famous football team West Bromwich Albion with a capacity of 26,850. This stadium can hold more than just football games, it can host many events such as parties or meetings.

The Hawthorns tour is something you definitely need to try out because you do not want to miss out on this amazing experience.