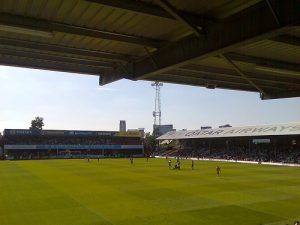 The ground gets its name from the Griffin in the logo of Fuller’s Brewery, which owned the land on which the stadium was built. The compact ground comprises 4 stands.

The home fans are allocated the Braemar Road stand (the main stand) an all-seated single tier stand, the Bill Axbey Stand (formerly the New Road stand), a single tier seated stand and the Ealing Road end, a covered terrace. The Ealing Road Terrace was formerly open to the elements and therefore housed the away fans. A roof was added in 2007 and now houses home fans only.

Away fans are now housed in the Brook Road Stand, a double tiered stand, comprising terracing at the lower level and seating in the upper section. This stand, which was opened in 1986, is known affectionately by Brentford fans as the “Wendy House.”

How to get to Griffin Park

Drivers from all routes should exit the M4 at junction 2, which is signed A4, N and S Circular A406 and Chiswick A315, onto the A4. At the Chiswick roundabout after about ¾ mile, take the 4th exit (signed S. Circular A205, A316, M3 Richmond) onto Chiswick High Road. Keep straight on for about ¼ mile as far as the lights at Kew Bridge. Keep in the A315 lane and go straight on, following signs for Brentford A315. At the lights after ½ mile, turn right into Ealing Road which runs past the ground.

Brentford, served by regular trains from London Waterloo, is just a 5-minute walk from the ground. On exiting the station onto Station Road, take the 1st right into Orchard Road, right again into Windmill Road, then the 1st left into Hamilton Road. Keep straight on for the stadium. 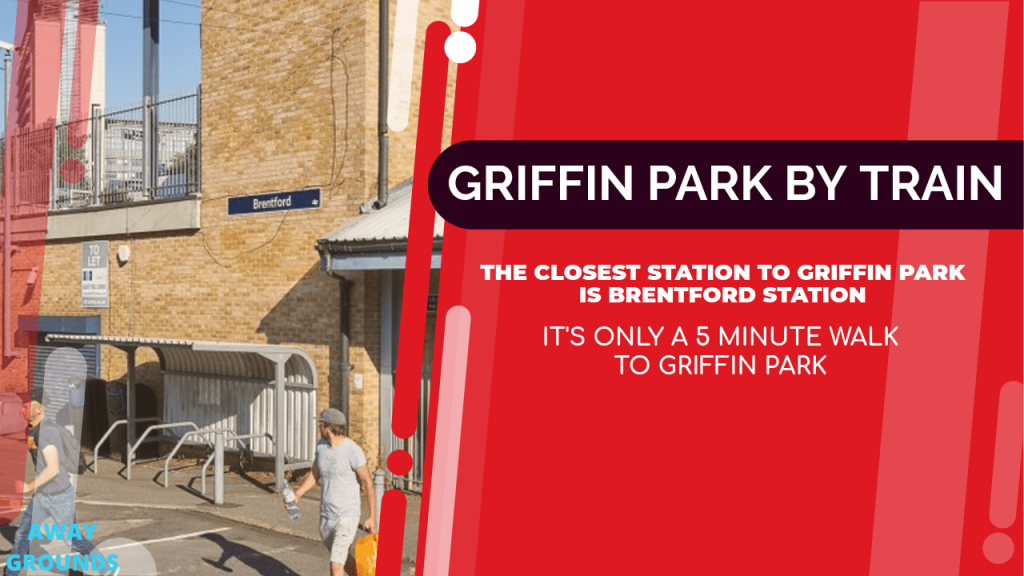 The nearest tube station is South Ealing, on the Piccadilly Line, about a 15-minute walk from the ground. On exiting the station, turn right down Ealing Road and cross the A4 at the bottom. Alternatively, the no. 65 bus runs to the ground from opposite the station. Click here to check the current train timetables

The nearest airport is Heathrow, at a distance of 7 miles. There are regular tube connections to South Ealing, with a journey time of about 20 minutes. Click here to check the current flight times

There are several taxi companies in Brentford that can take you to and from Griffin Park. You can always prebook a private hire taxi, or hail a black cab on any highway.

There is a car park near the ground. Turning into Ealing Road off the A4 the car park is immediately on the right. 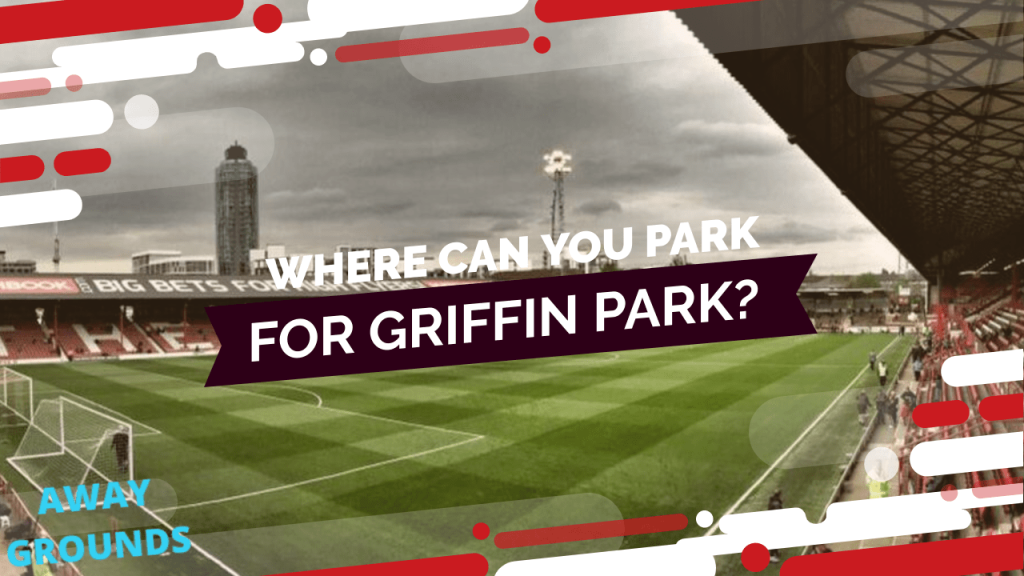 Coming away from the ground on Ealing Road towards the A4, it is the last left-hand turning before the lights. The car park is manned and remains open between 11.30 a.m. and 7.30 p.m. Otherwise street parking is available.

Away Friendly Pubs near Griffin Park

Griffin Park is famous for having a pub at each corner. Of the 4, the Griffin and the New Inn have received the best reports from visiting fans. Also nearby is the Potters Arms, which tends to be less busy on match days and has large-screen Sky Sports. This pub is just a few minutes walk across the road from the New Inn. Real ale lovers recommend the Magpie & Crown, just a 5-minute walk from the ground on Brentford High Street. 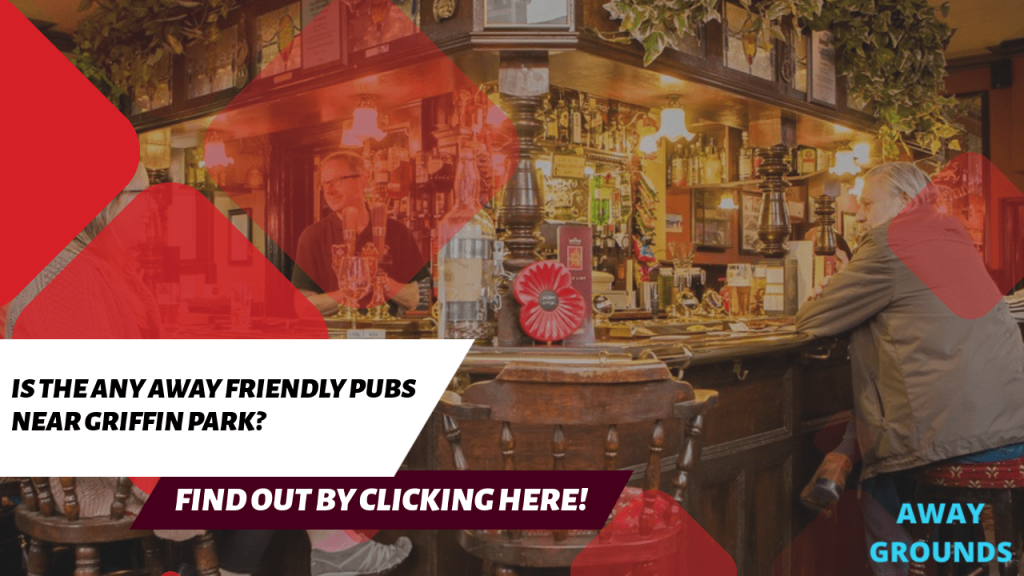 For rail travellers, another favourite is the Waggon and Horses, which is best reached by alighting at Kew Bridge Station, the stop before Brentford on the Waterloo-Reading line. Roddy’s Bar, just a couple of minutes from South Ealing tube station, reportedly has an amiable mix of home and way fans.

The Crowne Plaza London Ealing (pictured right), Western Avenue, Ealing, London W5 1HG is ideally located on the outskirts of Central London with easy access to public transport links and within 3 miles of Griffin Park. Guests have particularly noted the flexibility and helpfulness of staff.

Most away fans have had an enjoyable trip to Griffin Park, experiencing no problems in or around the ground. The views of play from the Brook Road Stand are reported as very good, though supporting pillars in the lower terraced area can impede the view. Facilities are reported okay, with a good selection of refreshments offered. 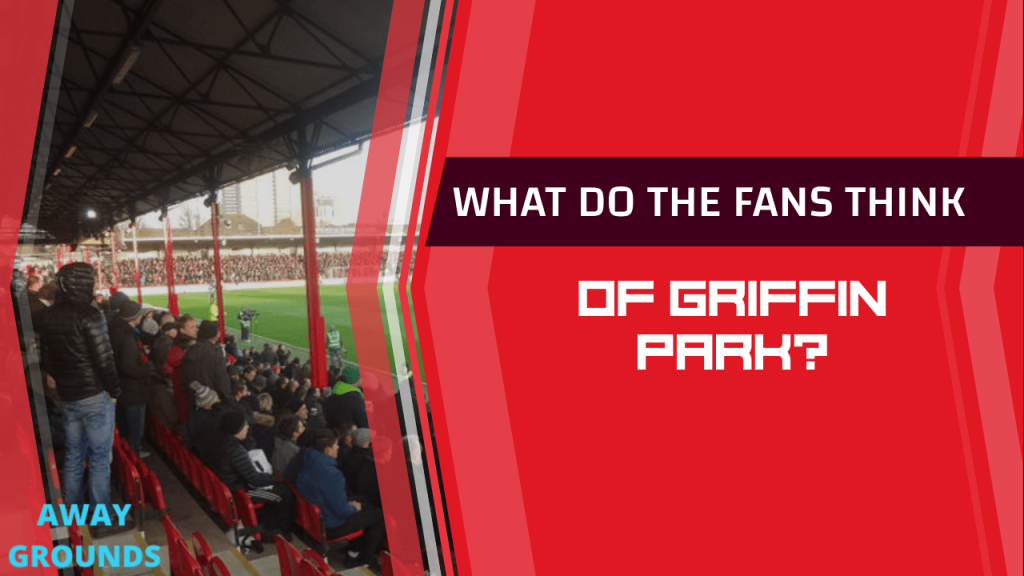 The stewards have received particular praise, keeping an unobtrusive presence and allowing fans to enjoy themselves. 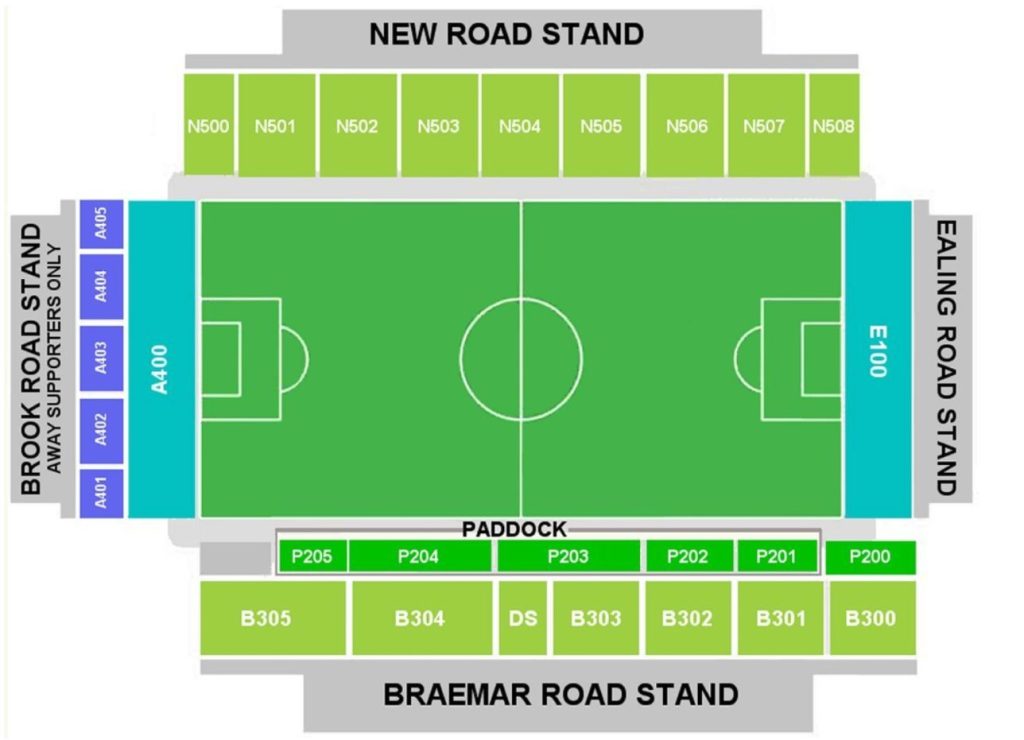 This ground can also be used for a brilliant family day out or the ideal school trip, for more information on events, click here.

Griffin Park was established in 1904, however, it began as a small single strand. Brentford has previously played at five different venues before securing the new lease in London’s west end. Brentford and Plymouth played their first league encounter at the stadium.

A new main stand was built in the late 1920s, followed by progressive upgrades to the surrounding stands over the following decades, but Griffin Park remained a modest affair.

Brentford’s elevation to the Championship in 2014 required more renovations, however, due to the stadium’s proximity to residential housing, significant expansions were not possible.

As a result, the club began work on a completely new stadium in 2015, securing planning clearance for a new 20,000-seat stadium less than a mile east of Griffin Park. Preliminary construction began in March 2017 and was completed in 2020, after a few setbacks.

Brentford hosted Swansea in the Championship play-off semi-final on July 29, 2020, which was the final first-team match at Griffin Park. The match was played behind closed doors due to the Covid-19 pandemic.

The stadium’s demolition began in 2021, with the goal of replacing it with homes.

Griffin Park was famous for having a bar on each of its four corners, making it the only stadium in the United Kingdom to do so.

Buying tickets for a football game is always a hassle. To save the fuss we recommend you visit the official Brentford FC site.

To buy and learn how to buy tickets, click here.

The best club in the land. Provides a perfect spectacle for football lovers. Even has standing!! The views are superb. The football is mesmerising and played the right way. The service is great. What more could you ask for!?!

This is an old fashioned stadium, hence great atmosphere ground. You are near the action wherever you are. Standing is still possible for both home and away fans. Well worth a visit.

What will happen to the Griffin Park Stadium?

Demolition of the Griffin Park site will start in Spring 2021 and should be completed in early 2022, according to the website’s timeline.

What is Griffin Park away end capacity?

Griffin Park away end capacity is 2000.

Which is the away end at Griffin Park?

Away fans sit in the Brook Road Stand when visiting Griffin Park.

Thank you for reading our Griffin Park Stadium guide. We hope you got all the information you were looking for and made watching football more enjoyable.

Good luck to your team!