Damson Park is an association football stadium in Damson Parkway, Solihull, West Midlands, England, known as the SportNation.bet Stadium due to sponsorship reasons. On July 23, 2013, it was announced that the stadium would be renamed the “Autotech Stadium” for the next three seasons due to sponsorship considerations. Damson Park has been home to Birmingham City Women F.C., a club formed in 1968, of the F.A. Women’s Super League since 2014. They previously shared Damson Park with other clubs.

The ground has seen a lot of changes in the last few seasons, and the construction of a new Main Stand is part of that metamorphosis. The Damson Homes Stand is a two-story structure that runs the length of the pitch. It is effectively a ‘double-decker’ stand with a seating area below and places for corporate hospitality boxes, press, etc., up above, having a capacity of 1,219 seats.

The Gas Centre Stand, commonly known as the Car Park or Airport side, is directly across the street. It stadles the pitch’s halfway line One of Birmingham Airport’s Conning Towers may be seen in the distance behind it. This is made up of three temporary seating blocks totalling roughly 1,300 seats. Even though they are covered, two of the blocks are made of flimsier material, which causes them to flap up and down in the wind.

A tiny covered terrace is located at the Draintech end of the site. It is only seven steps high, yet it spans the entire pitch and has a capacity of slightly under 1,000 people. If there is segregation, the majority, if not all, is allocated to visiting fans. The Jerroms Stand, sometimes known as the Damson Lane End standing areas, is located on the other end. Local fans refer to this modestly covered terrace as the ‘Shed End.’ The stadium contains seven towering floodlight pylons, three of which are on the Main Stand side and four on the opposite side.

How to Get to Damson Parkway

From the north, leave the M42 at Junction 6 and travel 2 miles south on the A45 towards Birmingham. Turn left at the filter lights into Damson Parkway, just before Honda Garage and across from the Holiday Inn. Continue for another mile until you reach the roundabout at the Land Rover Works entrance. Go around the dual highway and down the other side for 100 yards; the ground entrance will be on your left.

From the east, use the A45 towards Coventry. Turn left at the filter lights into Damson Parkway, past the Honda garage and across from the Holiday Inn. Continue for another mile until you reach the roundabout at the Land Rover Works entrance. Return 100 yards down the other side of the dual carriageway – the ground entrance is on the left.

Follow the A41 past Solihull School from Solihull Town Centre. Leaving Warwick Road, turn left onto Hampton Lane at the first traffic signal. Continue straight on Damson Parkway after crossing the next set of traffic lights. Continue through BUPA Parkway Hospital for just over a mile to the Land Rover Works roundabout. The ground entrance is 100 yards on your left after turning right at the roundabout.

Leave the M42 at junction five if coming from the south or west. Stay on the By-pass until you reach two sets of traffic lights close together, then take the first exit towards Solihull, A41. At the second set of traffic lights, turn right onto Damson Parkway. Pass the BUPA Parkway Hospital and continue for just over a mile to the Land Rover Works roundabout. The ground entrance is 100 yards on your left after turning right at the roundabout.

Trains run between Birmingham Moor Street and London Marylebone to Solihull Railway Station. In an approximately north-easterly direction, the ground is two and a half kilometres from the station.

It isn’t easy to define the walking route. However, half-hourly bus service is provided for the majority of the day. Descend the steps from the station platforms, turn right, and exit the station to the east through Station Approach (not to be confused with Station Road, which is actually in the town centre). The X12 bus, which departs at the Station Road bus stops outside John Lewis, will take you to the ground (stop S.B.). It’ll take you six minutes to walk there. 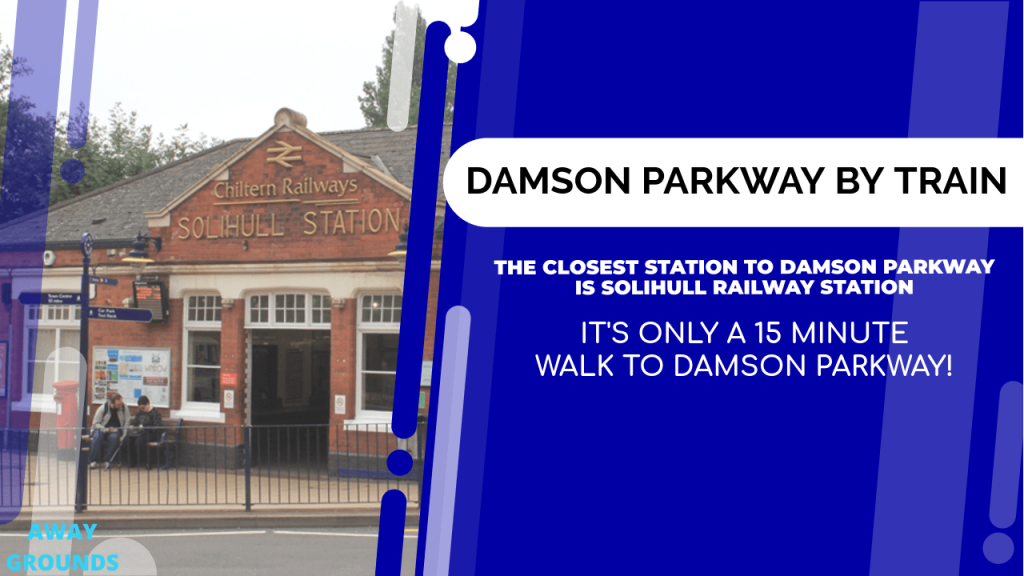 Once you’ve arrived at Station Approach, turn right and proceed east, crossing many roads and passing to the south of the large roundabout. It’s possible to board a bus from Station Approach to Station Road, the first stop. Bus number 957, as well as others, runs every 15 minutes.

Ask the driver to drop you off at the Rover Works entrance at the Damson Parkway/Damson Lane roundabout after you board the X12 bus. The Rover Works and the football pitch will not be visible until it is too late, and the bus will be on the dual highway. It’s then a two-minute walk along Damson Parkway to the roundabout, where you’ll pass the Rover Works doors. The X12 timetables are available on the National Express website. Please note that on weekday evenings, the last X12 bus back to Solihull departs at 21:35, so you may need to make other arrangements like booking a taxi.

It may be quicker to get to the ground by using the Euston to Birmingham New Street line to Birmingham International Railway Station. Then hop on the X12 bus to Solihull. The same bus runs through the grounds from Solihull Town Centre, as mentioned above. The X12 operates every 20 minutes on Saturday afternoons from bus stop S.B. at Birmingham International Station, which is around one and a half miles from the ground; however, walking from the station to the ground is not recommended because it is a primarily busy road with no pathway. Adults pay £2.30 for a ride that takes about eight minutes. The same bus also makes a stop at Birmingham Airport for fans who are flying in.

Birmingham International Airport is 1.24 miles distant and takes about 26 minutes to walk to.

Various taxi firms can take you to and from the stadium. You can always arrange a private rental taxi ahead of time or flag down a black cab on any highway.

The gates will open at 1 pm on Sunday for a 2 pm kick-off. It is preferable to arrive early to take advantage of the new food and beverage options. The gates open at 18:30 for a Wednesday game with a 19:30 kick-off.

In and around the stadium, there are numerous parking possibilities. On a first-come, first-served basis, free parking is available on the ground. Customers are recommended to use the NCP Freeport Multi-Storey Car Park, a 10-minute walk from the stadium after the stadium car park is full. On matchdays, Blues patrons receive cheap parking at the NCP. 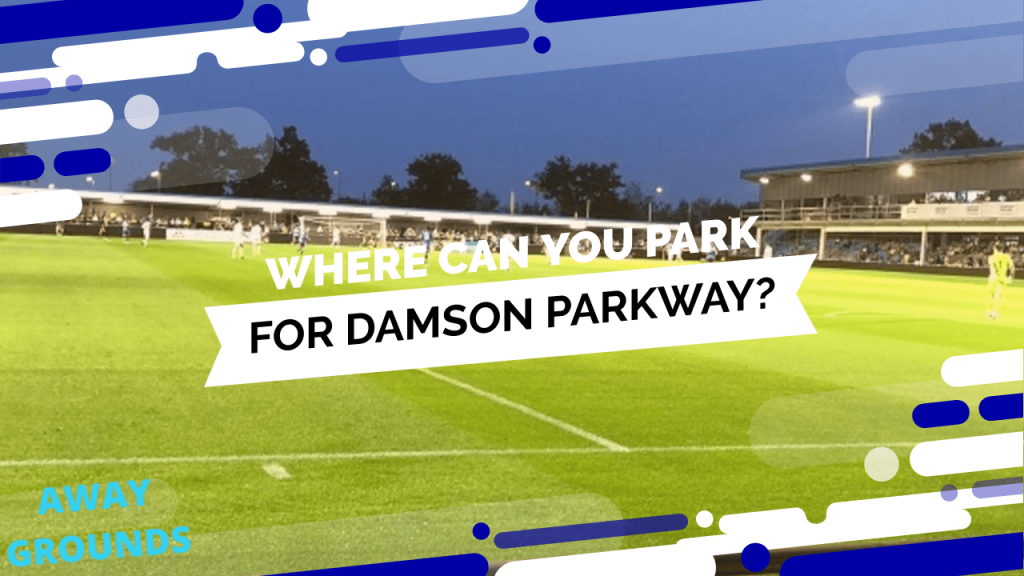 Customers will pay £2 for a one-hour parking permit but will be permitted to park for up to four hours. To receive an additional allowance on the rate, customers must produce a permit. You can obtain access from NCP staff at the parking park’s entrance. The machines at the NCP car park accept coins exclusively, although users can pay by card over the phone.

Away Friendly Pubs Near Damson Parkway

A club shop is located close to the stadium and welcomes visitors. There are four bars on the premises, three downstairs and one upstairs. The projected crowd determines the number of bars open on matchday. If the game is separated, one of these bars is usually reserved for visiting fans.

A small alfresco seating area is located in front of the clubhouse. If the game is not segregated, away fans are welcome to leave the stadium during halftime to visit the Club bars. Inside the ground, towards the corner of the away sections, is a small indoor facility known as the ‘Sadlers Bar,’ which offers Sadlers Peaky Blinders Ale, among other alcoholic beverages. 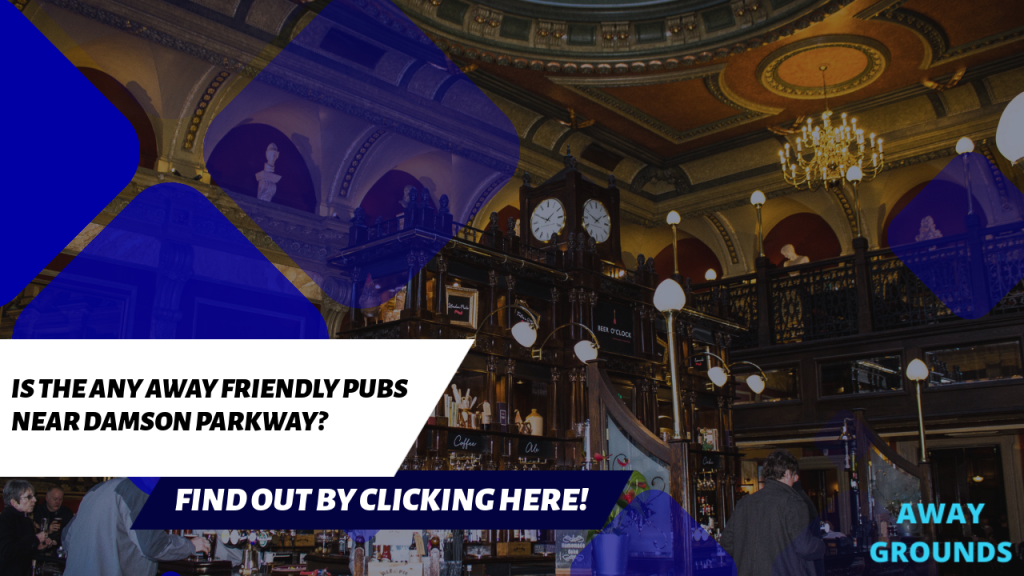 There is a Holiday Inn on-site with a bar if you park in the Birmingham Airport Cargo Terminal NCP Car Park. Otherwise, there are no other places to drink near the ground, so you’ll have to stop somewhere along the way.

Below are some hotels near the stadium:

The St John’s Hotel has a modern health and exercise centre, private parking, and an on-site restaurant in the heart of Solihull, approximately 5 miles from Birmingham International Airport.

Birmingham Airport, the NEC Birmingham, and Birmingham International Station are all within walking distance of the Genting Hotel. There is a casino, a lounge, a spa, and a restaurant at this hotel.

The exquisite 4-star Crowne Plaza Birmingham NEC is located near the L.G. Arena and the NEC and is set in landscaped gardens. Both the Birmingham International Airport and the Birmingham Rail Station are within 1.5 miles of each other.

This 4-star luxury hotel is located near the NEC in Birmingham. It has a free shuttle service to Birmingham International Airport, three restaurants, plus a spa bath and a glass-roofed pool.

What Have Other Away Fans said About Their Trip to Damson Parkway?

The majority of the games at Damson Park are gender-segregated. Away supporters are housed mainly in the Draintech Terrace, located at one end of the stadium. Depending on the number of visitors, all or part of this terrace is made available to them. This terrace has seven stairs and a capacity of slightly about 1,000 people. It is mainly covered at the back.

In addition, 504 seats are available in a temporary covered stand on the Gas Centre Stand side of the stadium for visiting supporters. This stand does have a roof, but it just covers the core sections of the stand, which isn’t a problem unless it’s raining or there’s a large audience in attendance. 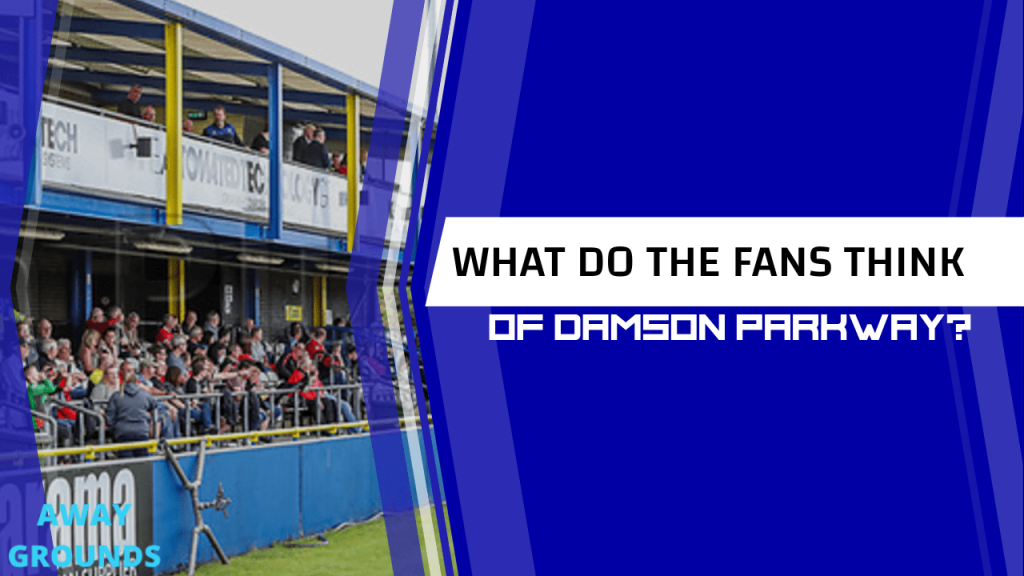 Four supporting pillars run along the front of this stand, which may obstruct your view slightly. The acoustics of the away terrace is excellent, allowing for a pleasant environment to be created. Please note that the away end is at the opposite end of the stadium from the ground entrance. Therefore you must go around the club car park to your right to reach the visitors’ turnstiles.

The Damson Lane pitch is wedged between Birmingham Airport on one side and the Jaguar Land Rover plant, with a succession of jets taking off throughout the game. As a result, there isn’t much to do in the vicinity. Thus you’ll find yourself stranded at the Damson Lane Ground.

Even so, if you arrive early enough, you will discover that the Clubhouse Bar is spacious and welcoming. If you arrive less than 90 minutes before kick-off and there is a large crowd in attendance, don’t be shocked if the parking lot is full and the scrum at the bar is four deep.

Which is the away end at Damson Parkway?

A terrace with a roof extends the length of the back end of the pitch and is used by away supporters at Damson Parkway.

What is Damson Parkway away end capacity?

Under the terrace at Damson Parkway, just under 1,000 away fans can be seated.