The Prostar Stadium is an all-seater venue, with a capacity of 9,875. Shrewsbury moved to the new stadium, on the outskirts of the town, in time for the 2007-08 season, from their old Gay Meadow ground, where they had played since 1910.

The new ground comprises 4, single-tiered, covered stands. Each of the stands is 18 rows high, with a wide perspex strip at the back, allowing more light to reach the pitch. On the East side of the ground is the Roland Wycherley Stand, named after the Shrewsbury Town chairman. This has a slightly different layout to the other stands with a press area and corporate boxes at its rear.

The North Stand, which is allocated to the away fans, houses a prominent Police Control Box. Four small floodlight pylons are present on the roofs of the side stands. The stadium is built so that the corners can be filled with seating, increasing the capacity to 12,500.

How to get to the Prostar Stadium

Travel to the end of the M54 and continue onto the A5. After 7 miles, bear left at the traffic island at the junction with the A49, continuing on the A5. Take the 3rd exit at the next roundabout on to the B4380 (Thieves Lane). Continue along Thieves Lane going straight over two roundabouts into Oteley Road. The stadium is further down Oteley Road on the left.

Shrewsbury train station is served by trains from Birmingham New Street, Crewe and Manchester Piccadilly. However, it is 2½ miles and a 40-minute walk from the ground. 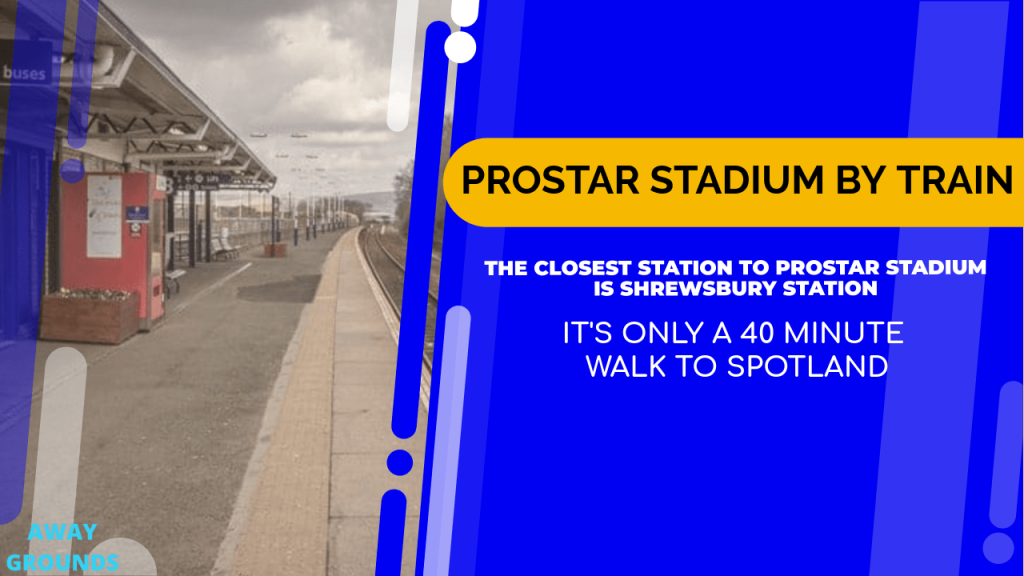 Bus services 8, 16, 23 and 25 all run from the bus station in the town centre and stop near the ground. Otherwise, a taxi to the ground is recommended. Click here to check the current train timetables

The nearest airport is Liverpool John Lennon, at a distance of 43 miles. Air travellers will need to catch a bus from bus stop 4 to Liverpool South Parkway station and then a train to Crewe, which in turn connects to Shrewsbury. Total journey time is about 2 hours. Click here to check the current flight times

There are several taxi companies in Shrewsbury that can take you to and from the Prostar Stadium. You can always prebook a private hire taxi, or hail a black cab on any highway.

prostar stadium parkingThe large car park at the stadium is reserved for permit holders. However, street parking is available in the nearby residential area on the left of Oteley Road, about a 15-minute walk from the ground. 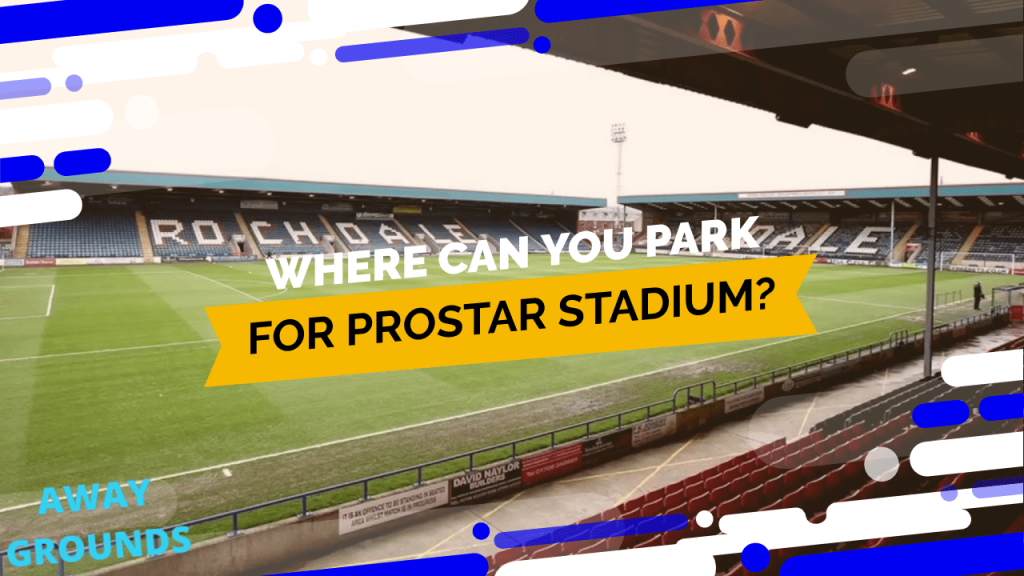 Alternatively, the club operates a Park & Ride scheme. Take the A5064 towards the town centre and at the roundabout with Lord Hill’s Column, take the 3rd exit and then first right into the car park. Otherwise, limited parking is available at nearby pubs (see below).

Away Friendly Pubs near the Prostar Stadium

Due to its location, pubs near the ground are a bit limited. However, the Brooklands Hotel, on Mill Street, is within a 5-minute walk of the ground and offers large screen TV and catering on match days. It is also an official “Park & Walk” pub, with about 100 parking spaces. The Charles Darwin has also received good reports. This pub is in the opposite direction, in Sutton Road, the second left off Oteley Road, about a 10-minute walk from the ground. This also has 70 free parking spaces. 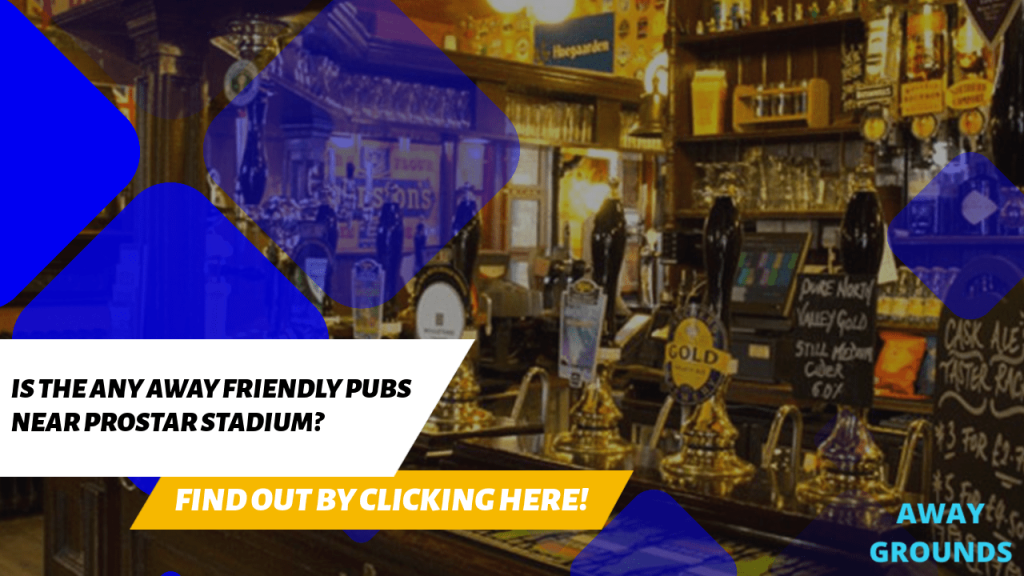 The Power League 5-a-side complex, behind the away end of the ground, has its own bar which admits away fans for a small charge. The bar serves hot pork and beef rolls. Otherwise alcohol is available within the stadium, but the bars close 15 minutes before kick-off and re-open at half-time.

Hotels near the Prostar Stadium

The 4-star Mercure Albrighton Hall & Spa (right), Ellesmere Road, Shrewsbury SY4 3AG is a 10-minute drive from Shrewsbury, but is set in picturesque grounds and guest reviews indicate that rooms are comfortable and well-equipped.

Many away fans have commented that the location of the ground, right a the edge of town, means that there are few nearby facilities. Most visitors have been pleased by the atmosphere within the ground, aided by a home drummer. Even though most of the home singers in the West Stand congregate as near to the away fans as possible, there has been no reported hostility. 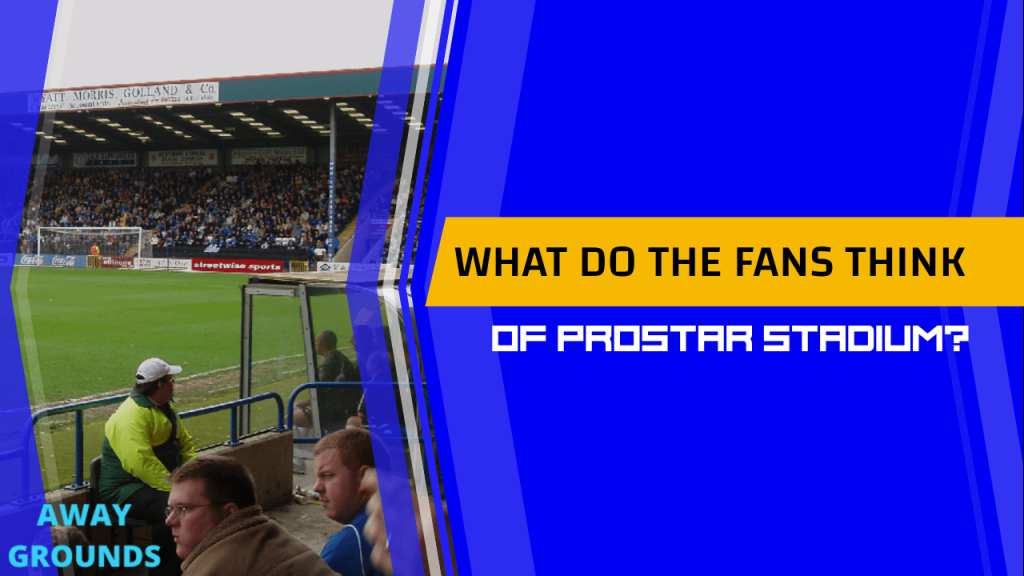 Visitors report that legroom in the North Stand is good and its steep nature keeps fans close to the action. The concourses are quite well laid out, with large plasma screens showing Sky Sports throughout the afternoon. Catering consists of very tasty burgers, pies and pasties. The swing doors at the entrances to the toilets were met with trepidation by some visitors. Although clearly marked “Entrance” and “Exit,” inevitably everybody uses both, resulting in chaos.

Which is the away end at Prostar Stadium?

Away fans at Prostar Stadium may be found in the North Stand, which is located at one end of the stadium.

What is Prostar Stadium away end capacity?

Around 1,796 away fans can fit in the North Stand at Prostar Stadium.