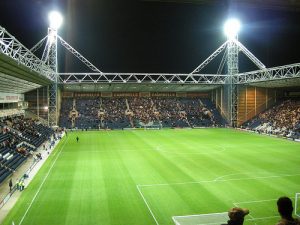 Deepdale is an all-seater stadium, with a capacity of 24,500. It is the home ground of Preston North End.

Much of the ground has been rebuilt in recent years. The North, East and West sides of the ground have large, covered single tier stands, named after former players Tom Finney, Bill Shankly and Alan Kelly.

The Invincibles stand, completely filling the Southern side of the ground, was completed in 2008, with a build cost of around £10 million. Though similar to the other stands, it has a smaller seating area, with executive boxes above. Away fans are housed in the Bill Shankly Stand. Outside the stadium, near the National Football Museum, is a statue of former Preston legend Tom Finney.

How to get to Deepdale

From the North, drivers should follow the M6 as far as junction 32, exiting onto the A6 to Preston. Take the 1st exit at the roundabout, continuing on the A6 towards Preston. After about ¾ of a mile, turn left onto the A5085 and right onto the A6063. Sir Tom Finney Way is on the left.

Preston station is around a mile and a half from the ground and takes around twenty five minutes to walk, so a taxi is recommended for all but the most energetic. 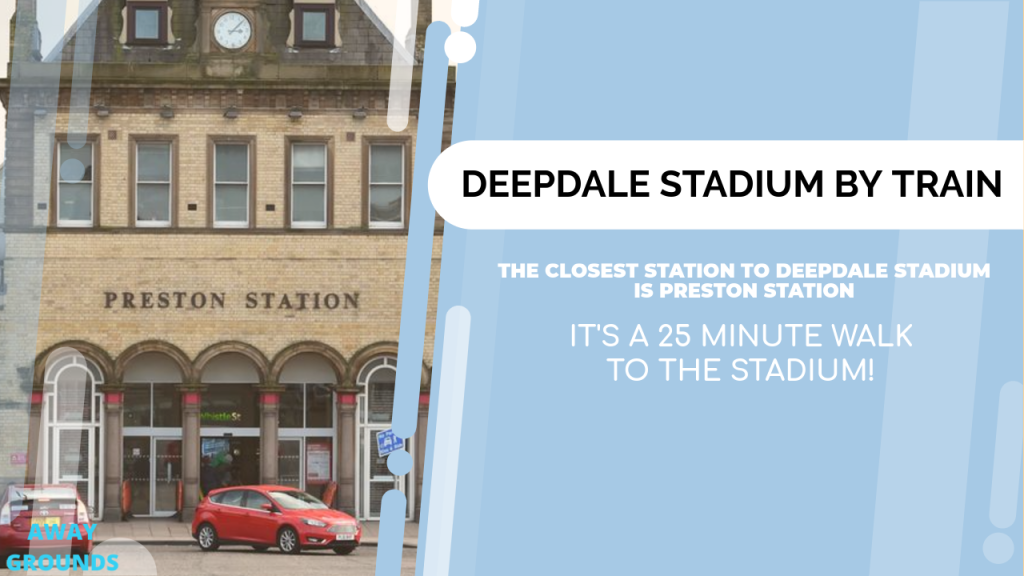 Blackpool is the nearest airport, just over 14 miles from the ground, with regular public transport links to Preston. Click here to check the current flight times

There are several taxi companies in Preston that can take you to and from Deepdale. You can always prebook a private hire taxi, or hail a black cab on any highway.

Calling all Preston Taxi Companies – Why not advertise your company here?.

Visiting fans should avoid the temptation of parking on grass verges near the ground, as many away fans report picking up parking tickets for this offence. Several fans have recommended Moorfields School as a suitable place to park. It is manned by volunteers from the school and reasonably priced, with proceeds going straight into school funds.

Away Friendly Pubs near Deepdale

Visiting fans advise avoiding pubs in the town centre as they are very partisan and refuse to serve away supporters. There are several pubs off the High Street which have been recommended by visiting supporters, notably the Old Black Bull and the Academy. 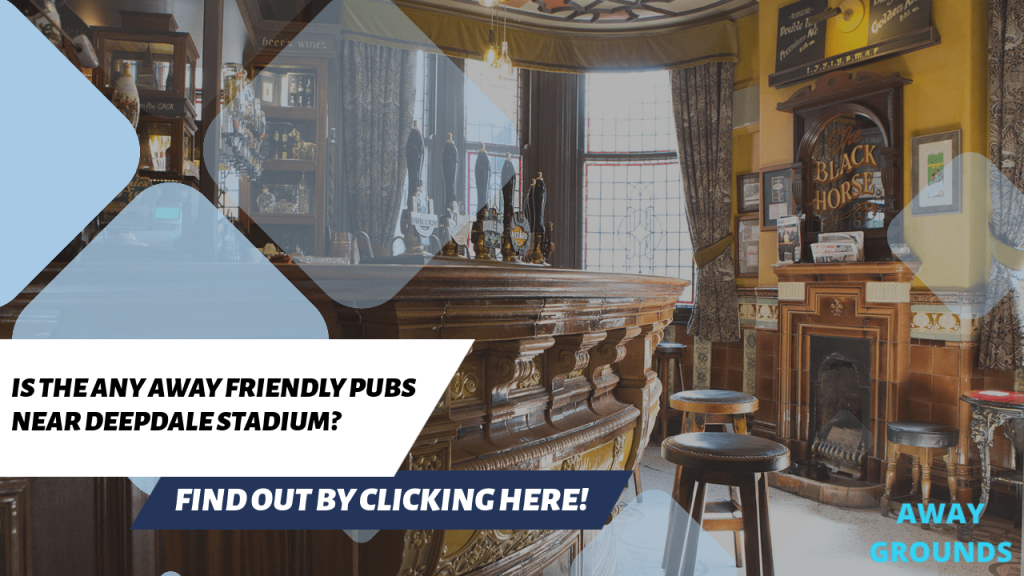 Closer to Deepdale, the Sumners, on Sir Tom Finney Way, provides a friendly atmosphere with an amiable mix of home and away support. It offers a good range of beers and the food is reported as excellent. Parking is also available for patrons. Otherwise alcohol is served within the ground.

The Holiday Inn Preston (pictured, left), The Ringway PR1 3AU is within a mile of the Deepdale stadium. This modern, 3-star hotel offers high quality, competitively priced accommodation in the heart of Preston. Free on-site parking is available.

A little further afield, The Marriott Preston (pictured, right), 418 Garstang Road, Broughton, Preston PR3 5JB occupies a tranquil woodland setting, yet is within one minute of junction 32 of the M6. All rooms are air-conditioned and the hotel offers a comprehensive leisure club and spa, complete with an indoor heated pool and gym. Complimentary parking is available.

What have other Away Fans said about their trip to Deepdale?

The majority of visiting fans have enjoyed the “Deepdale experience,” noting the friendliness of the home fans, stewards and police, which contributes to an excellent atmosphere inside the ground. 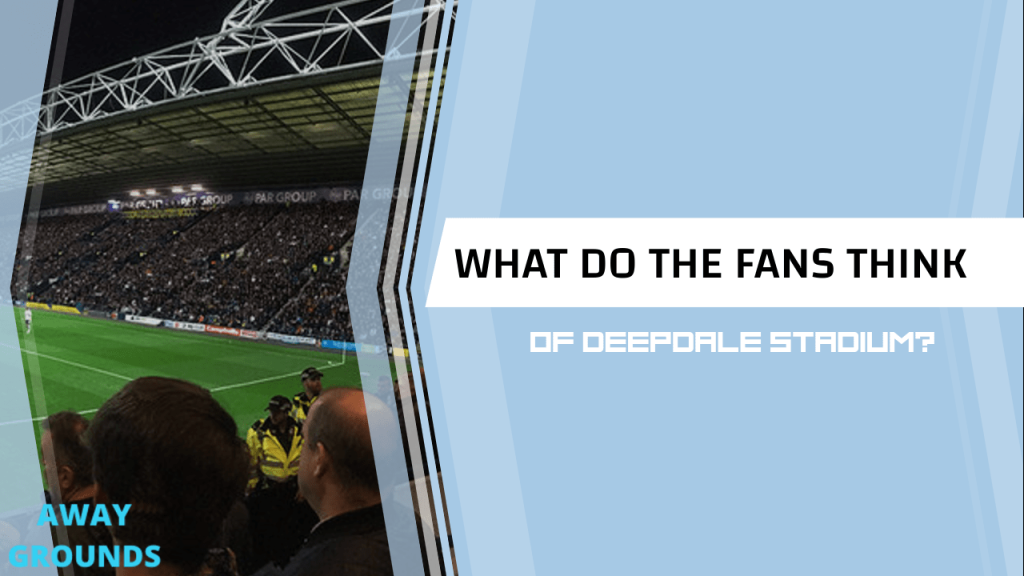 The Bill Shankly stand is steep, keeping fans close to the action and providing excellent views of play. There is a wide range of high quality food available. Many fans were pleased by the fact that the bars remain open during the game and nearby TVs ensure that none of the action is missed.

Deepdale was a fairly developed venue at the turn of the century, with the main stand and two open stands at the ends. Between 1921 and 1934, three new stands were constructed, beginning with both behind the goals and ending with the Pavilion Stand to the side.

At the time, the stadium could house around 45,000 people, with the maximum attendance being 42,684 in a league match versus Arsenal in 1938.

In the following decades, only minor alterations were undertaken, such as the building of extra roofs over the ends. Preston was the first club to construct an artificial pitch in 1986, which was widely panned by fans, and the club restored to a natural surface in 1994.

Preston began a significant redevelopment scheme in 1995, inspired by the Stadio Luigi Ferraris in Genova, that would result in the complete reconstruction of Deepdale. The Sir Tom Finney Stand was built first in place of the previous main stand, followed by the new Bill Shankly Kop behind the goal two years later.

The Alan Kelly Stand, the other stand behind the goal, was finished in 2001, but it took until 2007 for the old Pavilion Stand to be removed and replaced with a new one, completing Deepdale’s transition into a contemporary stadium.

Getting Tickets for Preston North End

Tickets can also be purchased at the stadium’s ticket office prior to the commencement of the game. In the Championship, Preston rarely sell out.

One of best stadiums in Lancashire and home to Preston North End. Atmosphere when a big club come to town is one you carnt best and the facilities are spot on

Wonderful arena to view the beautiful game with friends or family. The structure and pitch is always in immaculate condition and the atmosphere can be electric.

When did Deepdale stadium open?

What is the capacity at Deepdale stadium?

What is Deepdale Stadium away end capacity?

The City Ground away end capacity is 3000.

Which is the away end at the Deepdale Stadium?

Away fans at Deepdale Stadium are housed in the Bill Shankly Stand, which is located behind the goal. 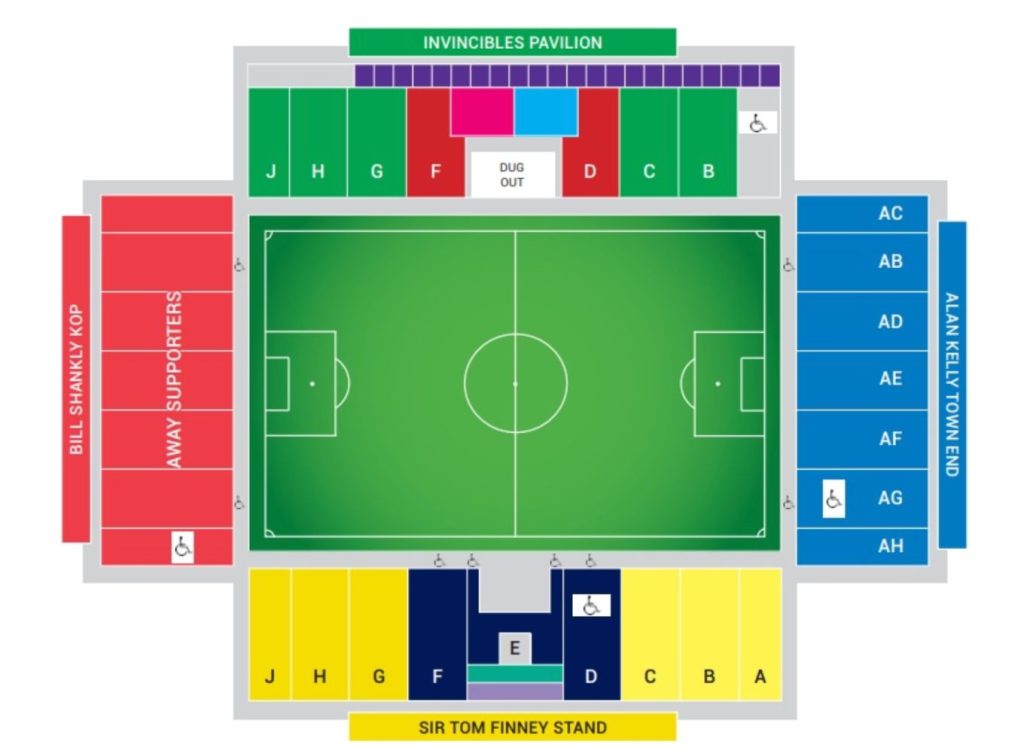 Deepdale stadium has a variety of facilities to suit your event. All rooms are fit a different amount of guests from 20-250, for more information on the rooms, click here.