The Riverside Stadium is all seater, with a capacity of 35,100.

The stadium opened in 1995, replacing Middlesbrough’s former home at Ayresome Park. The new stadium had a build cost of a mere £16 million and was completed within 8 months. It was the first ground specifically designed to comply with the 1990 Taylor Report, requiring all top-flight stadia to be all seater.

In 2005, the club erected the old Ayresome Park gates outside the Riverside Stadium as a new entrance.

Away supporters are housed in the South Stand, behind the goal, which is shared with home supporters.

How to get to the Riverside Stadium

The address of the Riverside Stadium, for satnav purposes, is Middlesbrough, Cleveland TS3 6RS.

Drivers arriving from the North are advised to use the A1(M), following signage for Darlington / A66(M). At the first roundabout, take the first exit onto Bridge Road towards Darlington, passing through 4 roundabouts. At the next, take the second exit, remaining on the A66. Follow signage for the Riverside Stadium which is located on the left.

Away fans driving from the South are advised to follow the A1(M) as far as junction 49, exiting towards the A168/ A19. Join the eastbound A66 towards Middlesbrough town centre and follow signage to the stadium. The map below is useful for directions from all UK locations and in locating suitable parking and recommended away friendly pubs.

The main Middlesbrough station is situated on Albert Road, within a mile of the ground, a walk of 10-15 minutes. On leaving the station, turn left into Zetland Road and left again into Exchange Place. At the crossroads (about 100 yards) turn right into Bridge Street and follow it for some 300 yards. 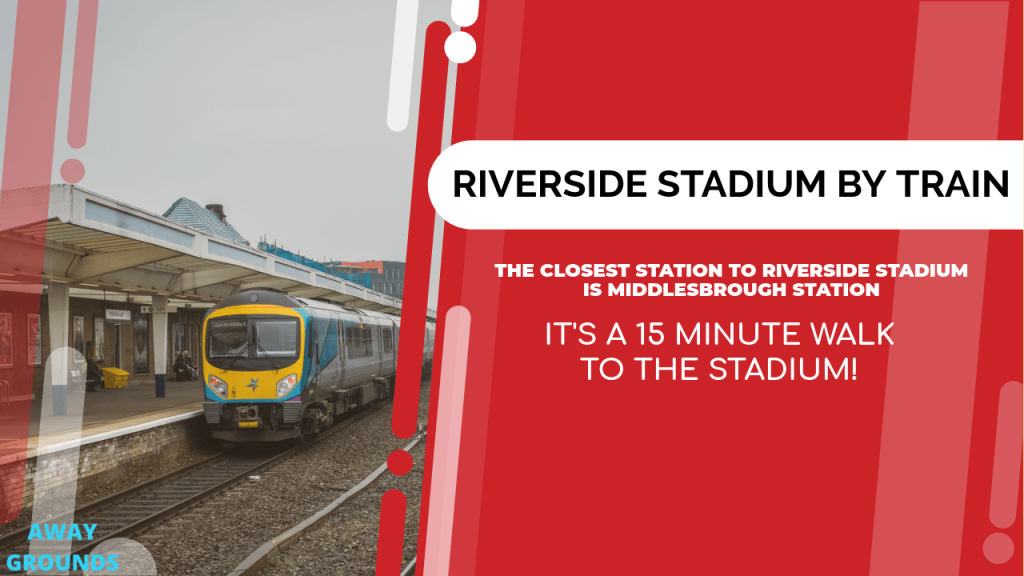 Turn right into Windward Way, going straight on at the roundabout into Dockside Road. The stadium is on the left, just after the roundabout. Click here to check the current train timetables

The nearest airport is Durham Tees Valley Airport, some 10 miles west of Middlesbrough and a short bus (service 20) or taxi ride from the city centre. The airport is serviced by a number of discount airlines, so that it is often cheaper to fly to Middlesbrough than travelling by rail or bus. Click here to check the current flight times

There are several taxi companies in Middlesbrough that can take you to and from the stadium. You can always prebook a private hire taxi, or hail a black cab on any highway.

Calling all Middlesbrough Taxi Companies – Why not advertise your company here?.

Many away fans have suggested using the long-stay car parks in the city centre, about a 15-20 minute walk to the ground.

Another alternative is to follow signs for “away coaches” from the A66 as this route leads past several reasonably priced car parks along the river. However, leaving these car parks after the match can take up to an hour.

Away Friendly Pubs near the Riverside Stadium

Away friendly pubs near the stadium are virtually non-existent. Several visiting fans have noted The Bridge pub on Bridge Street East as one to avoid. Most visitors recommended the city centre for a pre-match drink. 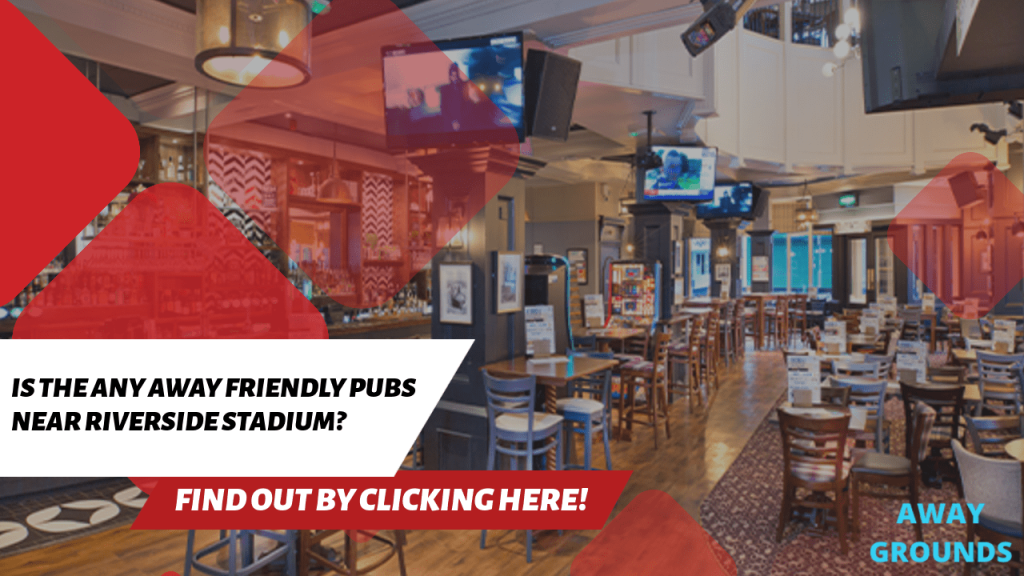 Several pubs in this area have been described as “OK,” but Doctor Brown’s on Corporation road seems a firm favourite with visiting supporters. A 10 minute walk from the stadium, the pub serves real ales, offers Sky TV and generally has a genial mix of home and away fans. Inside the ground, reasonably priced alcohol is served at the rear of the South Stand.

Hotels near the Riverside Stadium

The Best Western Middlesbrough (pictured, left), Marton Road, Middlesbrough TS4 2PA is a small, well-designed hotel, within a mile of Middlesbrough city centre. It offers a mixture of old world charm and modern facilities. Guest reviews have been consistently good, remarking upon quality of service and value for money. Free on-site parking is available.

What have other Away Fans said about their trip to the Riverside Stadium?

The majority of visiting fans have been impressed by the looks of the Riverside Stadium from the outside, but found its interior rather bland. There have been few complaints about the seating in the South Stand, which offers ample leg room and an excellent view of play. 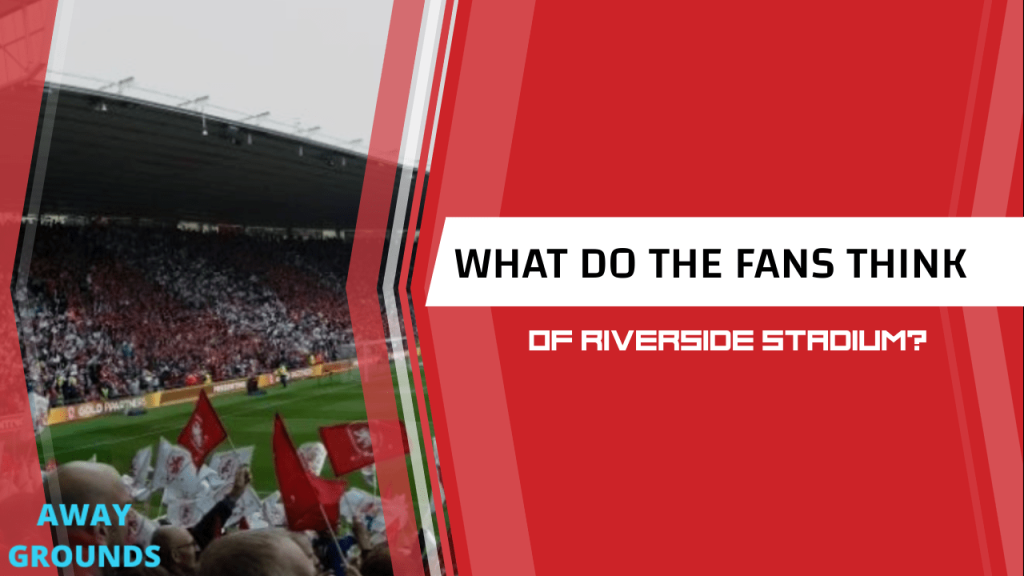 However, many visitors have been disappointed by the lack of atmosphere within the ground. Most away fans have described the facilities as adequate, with a fair range of food and drink available, though the narrow concourse leads to overcrowding at half-time.

Following the Taylor Report, the Riverside Stadium was the first significant contemporary English stadium to be built. It took the place of the former Ayresome Park, which was enclosed by terraced homes and had little room to expand.

The Riverside Stadium first hosted a match on August 26, 1995, between Middlesbrough and Chelsea (2-0).

The stadium was extended with an extra 5,000 seats in 1998. Middlesbrough has already received planning clearance for a 7,000-seat expansion but will wait until demand warrants it.

As a nod to the club’s past, the club erected the old Ayresome Park gates in front of the Riverside Stadium in 2005.

Getting Tickets for Middlesbrough Football Club

Middlesbrough FC tickets can be purchased online, over the phone at +44 (0) 844 499 1234, in person at the stadium’s Ticket Office, or at the MFC store in Middlesbrough’s town centre.

On the day of the match, tickets can also be purchased at the ticket office. Middlesbrough’s Premier League attendance has increased dramatically, yet tickets for most games are still easily accessible.

Middlesbrough’s home matches are divided into two pricing groups. Category B tickets, which are the most affordable, range from £30.00 for a seat behind the goal or on the lower side to £34.00 for an upper-tier seat in the main stand. Category A tickets range in price from £35.00 to £39.00.

First time we’ve been to this stadium and I was impressed. Excellent facilities and reasonable price for soft drinks. Easy access into and out of stadium.

Went to a concert here and was maxim capacity. Very well organised excellent staff friendly and helpful. Loads of toilet facilities which is normally an issue at large events. Lots of not badly priced food and drink options and fantastic concert. Would go again

When was Riverside Stadium built?

Riverside Stadium was built on the 26th of August 1995.

Middlesbrough Football Club is the owner of Riverside Stadium.

What is the capacity at Riverside Stadium?

The capacity at Riverside Stadium is 34,742.

What is Riverside Stadium away end capacity?

The away end at Riverside Stadium has a capacity of around 3,500.

Which is the away end at Riverside Stadium?

At Riverside Stadium one half of the East Stand, away fans are housed (towards the South-East corner) 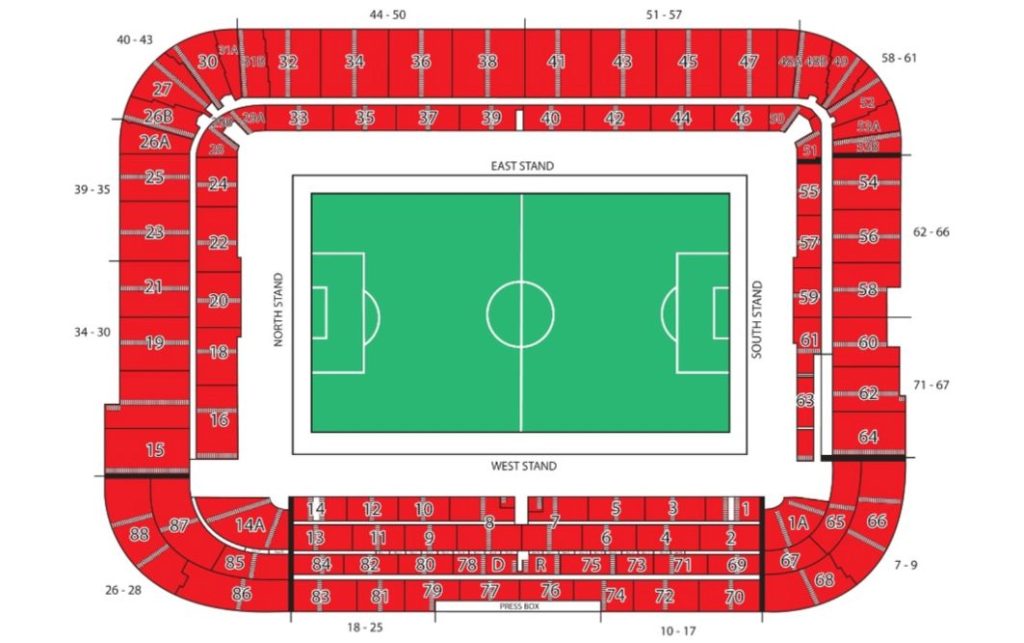 The Riverside Stadium in Middlesbrough, North East England, is a conference and events site. They provide high-quality conference facilities, as well as training and meeting rooms equipped with the most up-to-date audio-visual technology. Their facilities are backed up by a full-service event management team and technical know-how.

Their conference facilities in the North East include a customised room that can seat up to 220 people theatre style or 200 people banquet style. There are also audio-visual systems, wireless Internet connection, air conditioning, and technical support in the rooms.

The venue has a number of high-quality training, meeting, break-out, syndicate, and seminar rooms that can be rented alone or as part of a larger conference. These rooms also come with great presentation and IT equipment, such as computers, projection systems, and wi-fi connectivity, all of which are included in the room hire.

Thank you for looking through our Riverside Stadium guide. We hope it had everything you needed.