Portman Road has been the home ground of Ipswich Town since 1884.

All 4 stands have been converted to all-seater following the recommendations of the Taylor Report. Also located at the ground are conference and banqueting facilities, the Sir Bobby Robson Suite, Legends Bar and a club shop selling Ipswich merchandise.

Ipswich’s promotion to the Premiership in 2000 led to the club spending around £22 million on redeveloping both the North and South stands. The complete renovation of the South Stand into a two-tier stand added 4,000 seats to the stadium. The subsequent demolition and reconstruction of a two-tier North Stand added a further 4,000 seats and brought the total capacity of the ground to more than 30,000.

Away fans are housed in the upper tier of the Cobbold Stand at the South side of the pitch. Outside the ground are statues of World Cup winning manger Sir Alf Ramsey and former Ipswich and England manager, Sir Bobby Robson.
Next match:

How to Get to Portman Road

The address of the stadium is Portman Road, Ipswich IP1 2DA.

From the South, drivers can follow the A12 as far as the outskirts of Ipswich, picking up the A1214 London Road, which eventually becomes the A1071 Handford Road. Portman Road is about ½ a mile on the right.

Ipswich train station is only ¼ of a mile from the ground and is served by trains from London Liverpool Street and Peterborough. 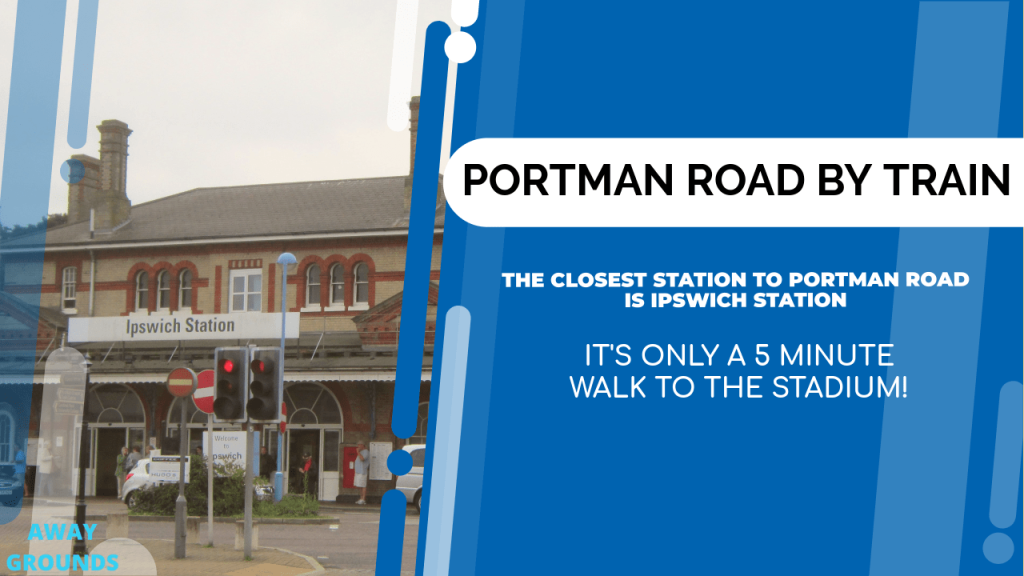 Stansted is the nearest airport, some 40 miles from Portman Road. “Stansted Express” trains depart every 15 minutes for London Liverpool Street, with a journey time of about 45 minutes. Click here to check the current flight times

There are several taxi companies in Ipswich that can take you to and from Portman Road. You can always prebook a private hire taxi, or hail a black cab on any highway.

Calling all Ipswich Taxi Companies – Why not advertise your company here?.

On-street car parking near the ground is very limited. However, there are 3 “Pay and Display” car parks in Portman Road, offering 800 spaces. 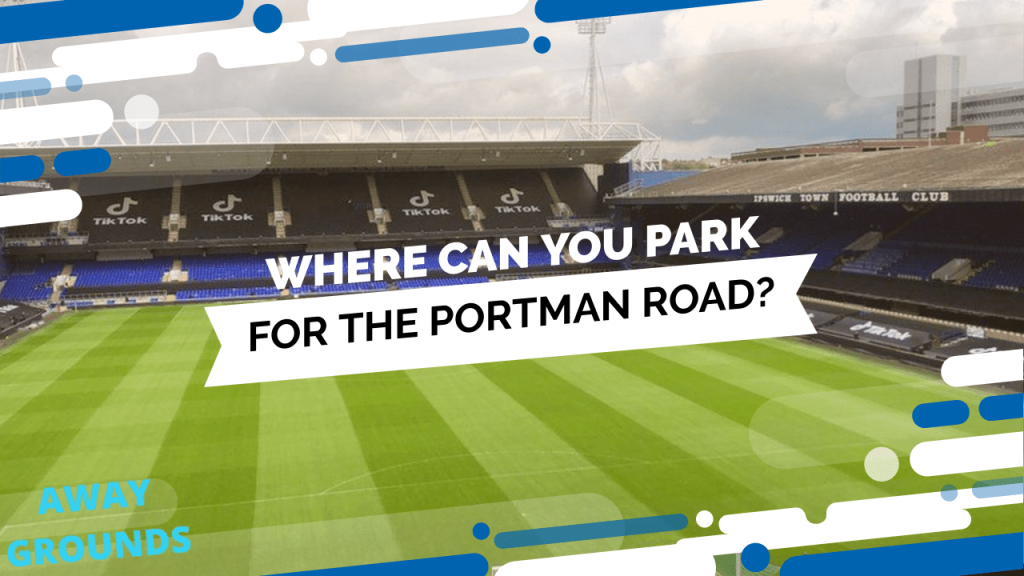 Visiting fans have advised early arrival to ensure a space close to the ground. Alternatively, there is a multi-storey car park adjacent to the train station, along with several well signposted car parks in the town centre.

Away Friendly Pubs Near Portman Road

The Drum and Monkey, in Princes Street, used to be the “traditional” away fans’ pub, but following refurbishment has declared itself a “home fans only” pub. Other nearby pubs, including the Hare & Hounds, the Swan and the Victoria are very partisan home pubs. Visitors have advised away fans to avoid these at all costs. 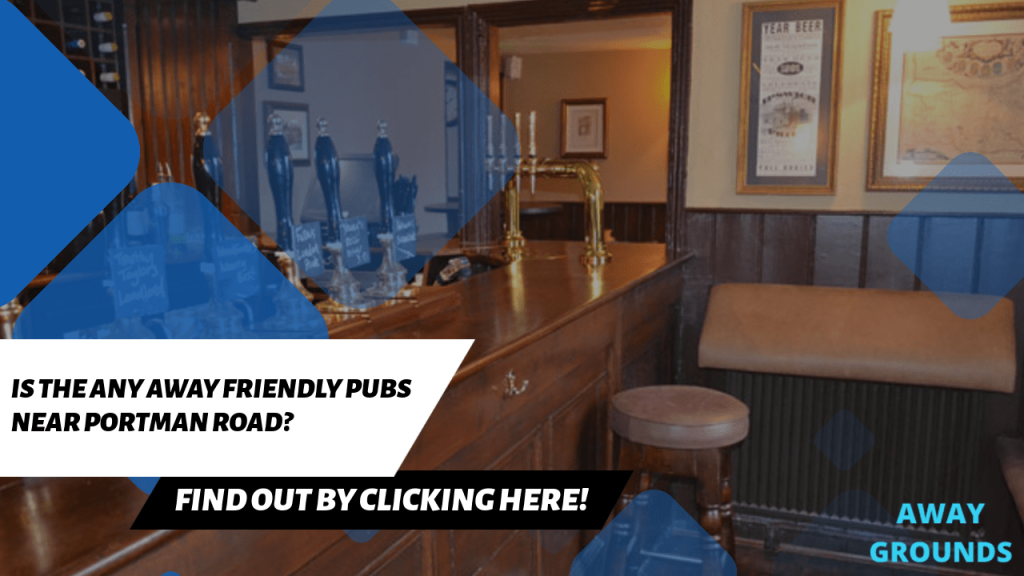 This leaves visiting fans a “Hobson’s choice” of the Station Hotel, in Burrell Road, opposite the railway station. Described as “a huge barn of a pub,” several fans have been disappointed by the limited range of beers available, but found the welcome very friendly.

The Novotel Ipswich, Greyfriars Road, Ipswich IP1 1UP is located near the town centre, within 400 yards of the Portman Road ground. All rooms have wireless Internet access, satellite television, tea and coffee facilities, direct-dial phones and safes. The quality of food is reported as excellent. Onsite parking is available at extra cost.holiday inn ipswich

The Holiday Inn Ipswich, London Road, Ipswich IP2 0UA is with 2 miles of the ground. It is reported to be clean and modern, with helpful staff. All rooms are air-conditioned, with satellite TV, Internet access and a mini bar. Hotel facilities include an indoor pool, gym and spa.

What Have Other Away Fans Said About Their Trip to Portman Road?

The majority of visiting fans appear to have enjoyed their day out at Portman Road, though many have found travelling very tiring. The atmosphere in and around the ground is reported to be good, with friendly home supporters. The views from the away section are generally pretty good, but legroom is barely adequate. 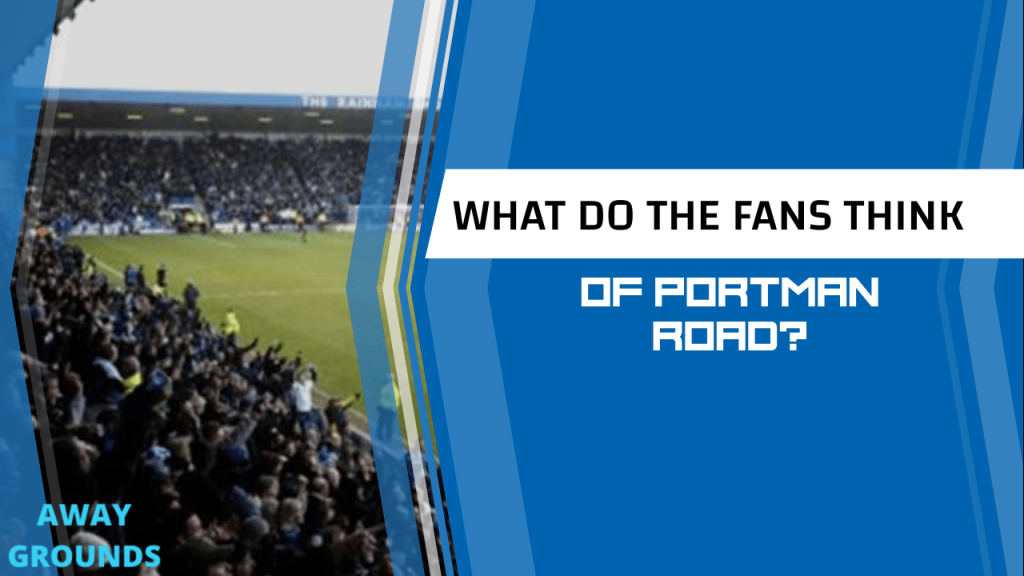 Several fans have complained that supporting pillars at the rear of the stand obscured their view of the action. The range and quality of food available inside the ground is reported as average.

Ipswich Town had their first match at Portman Road in 1884, however, it was merely a bare pitch with a pavilion belonging to the cricket club who shared the stadium with them at the time.

A modest wooden stand was built in the early twentieth century, but it wasn’t until 1936, when Ipswich became professional, that substantial terraces were built.

In 1975, the stadium set a new attendance record when 38,010 people attended an FA Cup match between Ipswich and Leeds. The West Stand has expanded again in 1982, but capacity had already begun to dwindle due to safety precautions.

Following promotion to the Premier League in the late 1990s, money was made available for additional modifications, resulting in the total reconstruction of both stands behind the goals in 2000 and 2002.

Getting Tickets for Ipswich Town

Ipswich Town tickets can be purchased online or at the Portman Road ticket office.

On the day of the match, tickets are also available at the gate. Ipswich Town’s games are rarely sold out.

Which is the away end at Portman Road?

Blocks V1 and V2 of the Cobbold Stand are normally used as the away end at Portman Road, with block E being used for larger away crowds.

What is Portman Road away end capacity?