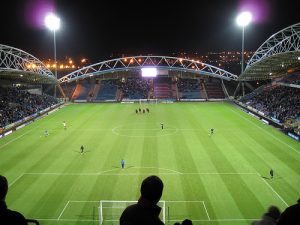 Opened in 1994, Huddersfield Town’s Galpharm Stadium is all-seater, with a capacity of 24,500.

There are four stands. The Direct Golf UK Stand is two-tiered, with a row of executive boxes running between the tiers. The Antich Stand, opposite, is a large, single-tiered stand seating over 7,000. The Pink Link South Stand is usually allocated to away fans and seats 4,054.

This is built into natural banking and is the most basic of the stands. The Fantastic Media North stand is the tallest stand with two tiers, 16 hospitality boxes and a viewing room for players’ guests. The lower tier consists of temporary seating that can be removed for events such as concerts.

How to Get to the Galpharm Stadium

For satnav purposes, the postcode of the Galpharm Stadium is HD1 6PX.

Drivers arriving from the North should exit the M62 at junction 25, following signage for Huddersfield town centre (A62). The stadium is well signposted thereafter.

From the South, leave the M1 at junction 38 taking the A637 towards and then the A642 into Huddersfield. On approaching the town centre, stay in the right hand lane, turning right at the island onto the A62 Leeds Road. The stadium is a short distance on the right.

Huddersfield railway station is approximately half a mile from the Galpharm Stadium. On exiting the station, turn down past the George Hotel and go straight on at the crossroads into Northumberland Street. Cross the ring road into Leeds Road and turn right into Gasworks Street. 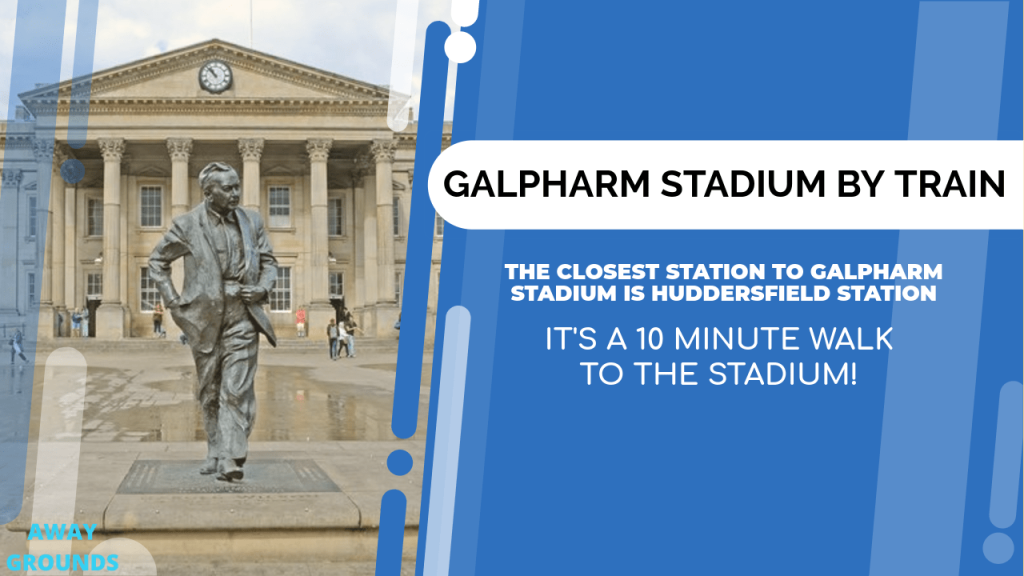 The ground is straight on at the crossroads. Alternatively, buses and taxis are available directly outside the station. Click here to check the current train timetables

The nearest airport is Leeds Bradford at a distance of just over 15 miles. There are regular rail connections from the airport to Huddersfield, with a journey time of about 90 minutes. Click here to check the current flight times

There are several taxi companies in Huddersfield that can take you to and from the Galpharm. You can always prebook a private hire taxi, or hail a black cab on any highway.

Calling all Huddersfield Taxi Companies – Why not advertise your company here?.

There is a large car park located at the Galpharm Stadium, along with several unofficial car parks nearby. 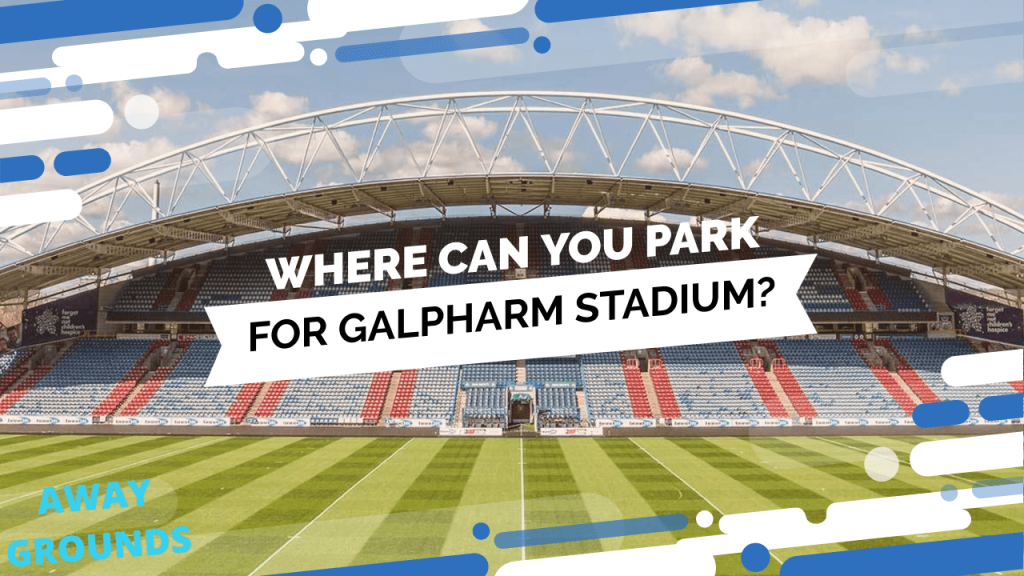 Away Friendly Pubs Near the Galpharm Stadium

The Head of Steam pub at the railway station has been recommended by several visiting fans for its welcome, beer and food. The Gas Club on Gasworks Street has also been the subject of favourable reports, with parking also available in a patrolled car park. 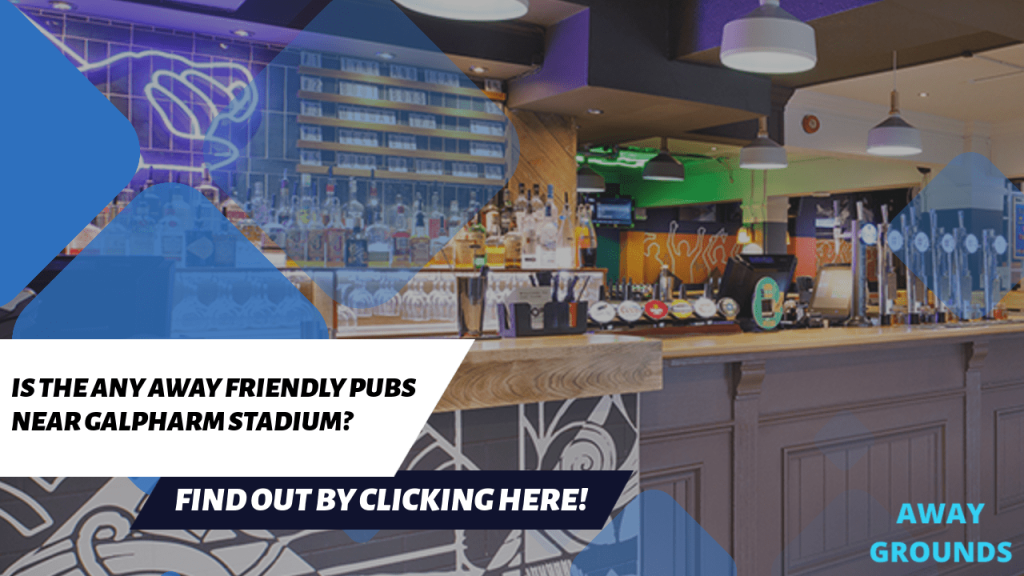 The Rope Walk pub, behind the North Stand, also appears okay, whilst there are also bars at the rear of the away end of the ground.

Hotels Near the Galpharm Stadium

Holiday Inn Leeds Brighouse, Clifton Village, Brighouse HD6 4HW is a modern hotel, easily accessible from junction 25 of the M62 and within 3½ miles of the Galpharm Stadium. Guest reviews suggest that rooms are of an excellent standard, with air-conditioning and a wide range of facilities.

Days Inn Hotel Bradford (Leeds), Clifton, Leeds HD6 4JX is handy for Leeds Bradford airport and the M62, but only 4 miles from the Huddersfield ground. This value-for-money hotel has well-equipped rooms and is adjacent to a Welcome Break service area.

What Have Other Away Fans said About Their Trip to the Galpharm Stadium?

The majority of away fans appear to have enjoyed their trip to the Galpharm Stadium, reporting the stadium and general set up to be quite impressive. The facilities in the away stand and the view of the playing action are both reportedly good. 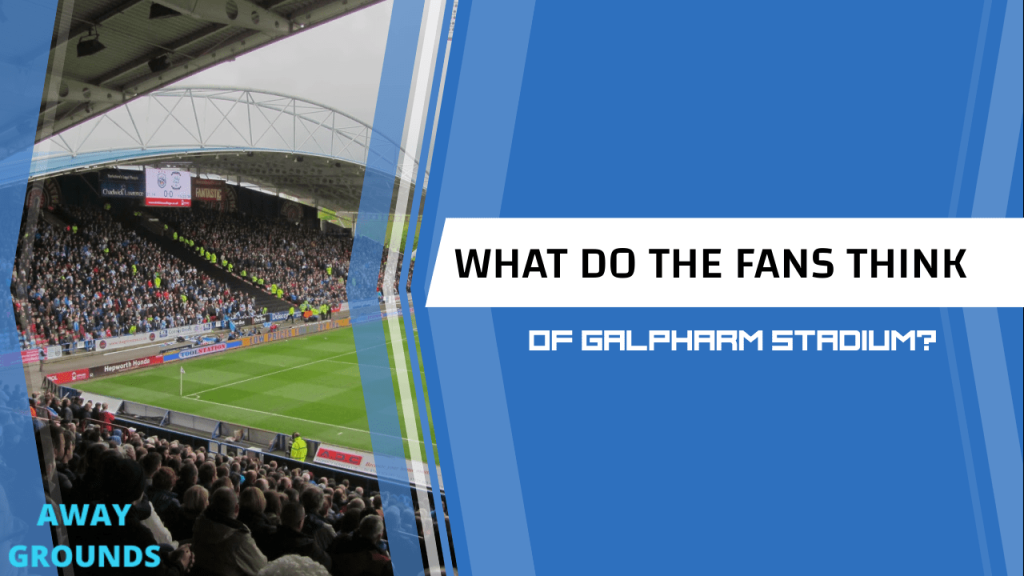 The range of food on offer is limited to pies only, though these appear to be of good quality and reasonably priced. The bar at the rear of the away stand which remains open until after half-time has proved popular with many visitors.

The John Smith’s Stadium in Kirklees, often known as Kirklees Stadium, was one of England’s first modern-era stadiums. It took the place of the old Leeds Road in Huddersfield.

The stadium’s construction began in 1992, and Huddersfield moved into their new home in the summer of 1994 after the completion of two new stands. In late 1994 and 1998, the stands at both ends were constructed.

Getting Tickets for Galpharm Stadium

Galpharm Stadium Tours in Huddersfield offers a behind-the-scenes tour of the stadium as well as a walking tour of the town.

View the pitch from the Directors VIP seating, go through the tunnel area, sit in the dugout, and see the Huddersfield Giants dressing rooms, among other things. Galpharm Stadium Tours are available for groups of 10 or more people.

When was Galpharm Stadium built?

Galpharm Stadium was built in 1994.

What is the capacity at Galpharm Stadium?

What is John Smiths Stadium away end capacity?

The Huddersfield away allocation at Galpharm Stadium is around 2,500.

Which is the away end at Galpharm Stadium?

Away spectators visiting the John Smith’s Stadium can be found on one side of the Chadwick Lawrence Stand, behind the goal.

We had a lovely experience here! Nice fans and even great for the whole family. You got a great bar just outside the stadium for a Nice lunch and beers!

Been going to this stadium since it opened its a fantastic day out and the atmosphere is great. Its a friendly stadium with good food and drinks. 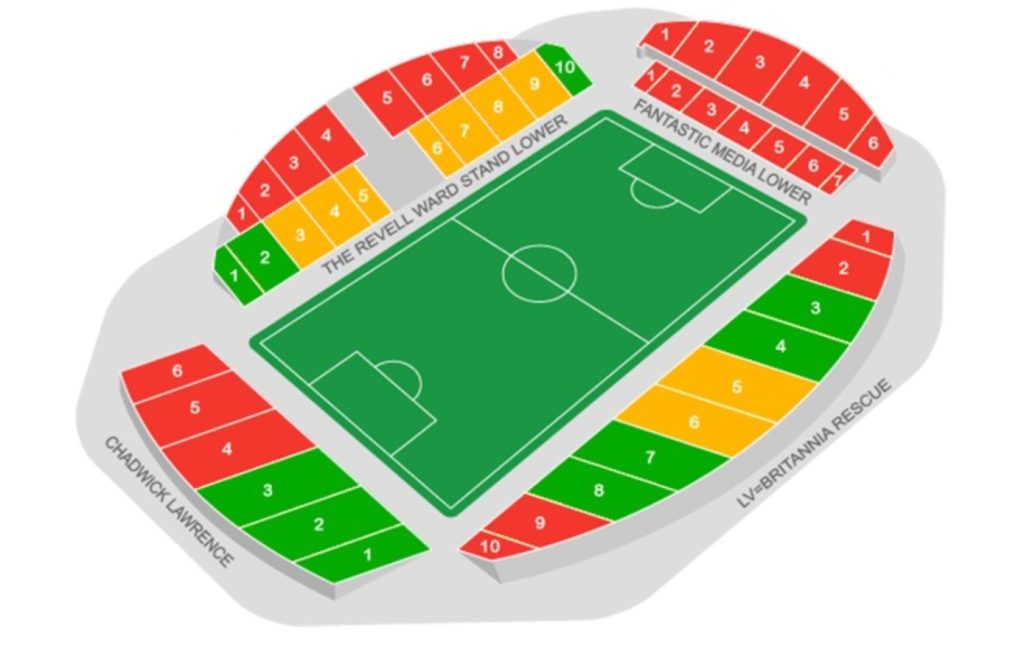 Matchday hospitality and significant events are available at this stadium. With a fantastic assortment of suites and rooms to choose from, the John Smith’s Stadium is suitable for conferences, meetings, weddings, and banqueting of any size.

Thank you for taking the time to read our Galpharm Stadium guide. We hope our information helped you.