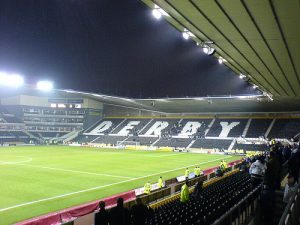 Pride Park is an all-seater stadium, with a capacity of 33,500. It is the home ground of Derby County FC.

The new stadium, with a build cost of £28 million, was opened in July 1997, replacing the Baseball Ground, Derby’s home since 1895. It is completely enclosed, with executive boxes (for the Prawn Sandwich brigade) in one corner.

The large, two-tiered West Stand occupies the full length of the pitch. The remaining three stands are single-tiered, and are arranged in a horseshoe.

Away fans are located at one end of the stadium in the Cawarden (South) Stand.

How to get to Pride Park

Drivers arriving from the North should leave the M1 at junction 28, following the southbound A38 towards Derby. Pride Park stadium is well signposted from the A38.

From the North-West, leave the M6 at junction 16 and join the A50 Stoke-Derby link road. Join the A38 towards Derby following signage for the stadium.

Pride Park is a 15-minute walk from Derby mainline station and is well signposted. 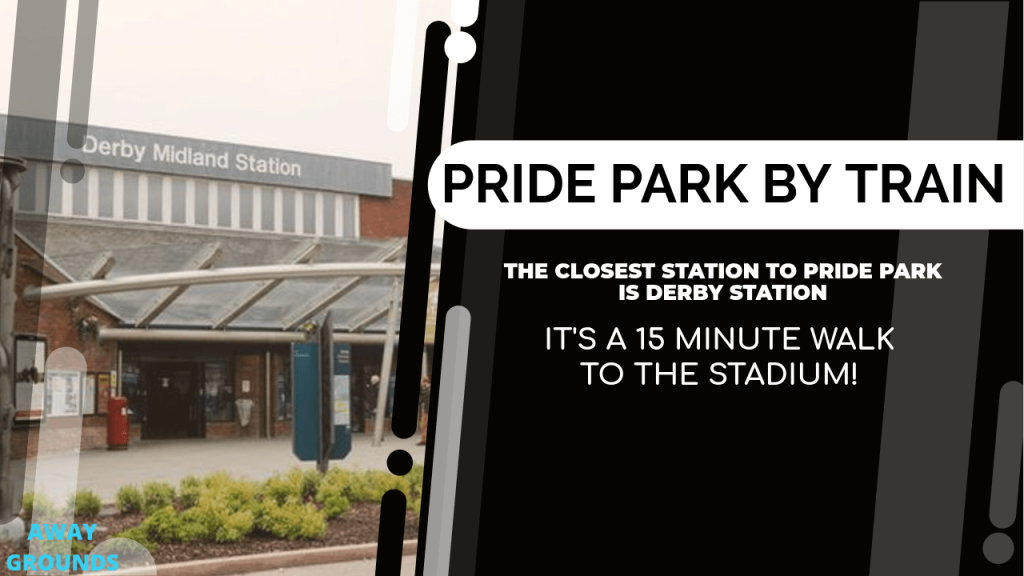 On exiting the station, turn right, right again at the bottom of the road and follow the crowd. Click here to check the current train timetables

East Midlands is the nearest airport, some 8 miles from Pride Park. The “Skylink” bus service runs to Derby city centre on a half-hourly basis. Click here to check the current flight times

There are several taxi companies in Derby that can take you to and from Pride Park. You can always prebook a private hire taxi, or hail a black cab on any highway.

Calling all Derby Taxi Companies – Why not advertise your company here?.

Parking near the ground is very limited and visiting fans recommend parking in the city centre and walking to the ground. 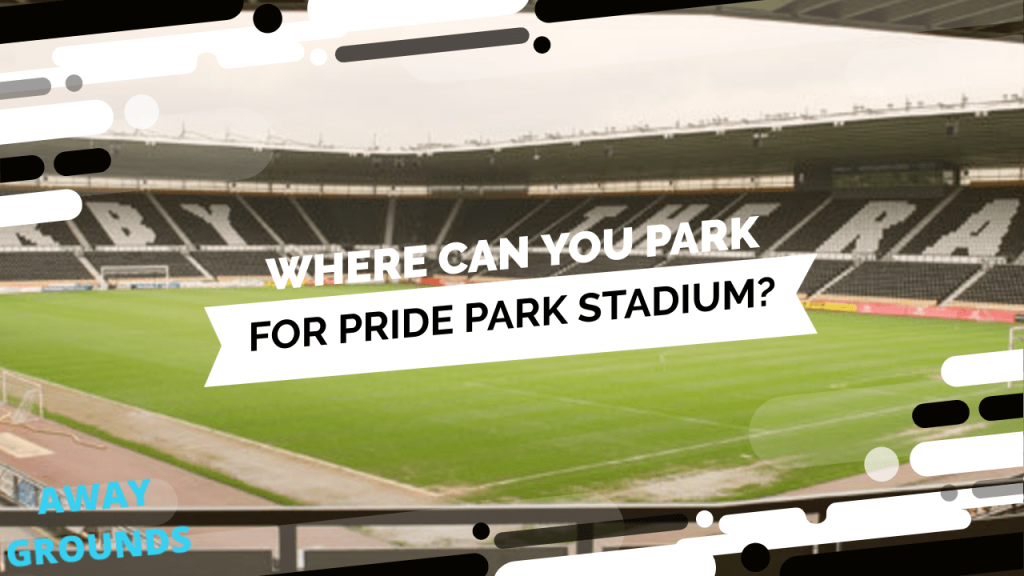 Several fans have recommended the reasonably-priced cattle market car park, just off the A52, which is a 15-minute walk from the ground. This car park can be reached by taking the first exit at the “Pentagon” roundabout, taking the next left and “doubling back” for some 300 yards. The car park is on the left.

Away Friendly Pubs near Pride Park

The Alexandra Hotel and the Brunswick, near the railway station, have both been recommended by visiting fans. Both have a “railway” theme and serve a wide range of real ales. The Crown and Cushion, on London Road, has also received several recommendations. 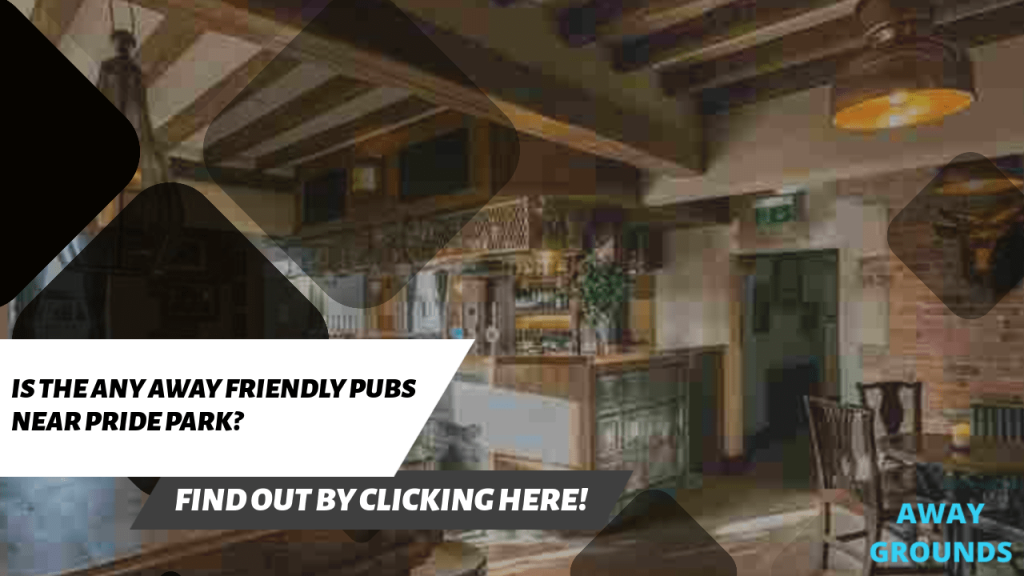 There is a Harvester outlet, within a 5-minute walk of the ground, which also admits away supporters. Within the ground, there are bars to the rear of the stands, but these can become very crowded.

The Ramada Encore Derby, Locomotive Way, Derby DE24 8PU has a central location, a mere stone’s throw from Pride Park. It has received excellent reviews for comfort, cleanliness, service and value for money. All rooms have satellite TV and Internet access, while hotel facilities include a gym and sauna

The Days Inn, Derby DE21 6DA is a contemporary hotel located next to the Derbyshire cricket ground, within a mile of Pride Park. All guestrooms are equipped with satellite television, Internet connections, direct-dial phones, clock radios, coffee/tea-makers and complimentary newspapers. Visitors have been impressed, commenting on the large, comfortable rooms and notably the bar, which is open to residents until 2 a.m. Complimentary parking is available outside the hotel.

What have other Away Fans said about their trip to Pride Park?

The vast majority of visiting fans appear to have thoroughly enjoyed their trip to Pride Park. The passionate home support, coupled with the stadium design makes for a lively, noisy atmosphere. However, the Derby fans are friendly and few away supporters have experienced any feeling of intimidation. Visitors have been greatly impressed with the stadium and its facilities. 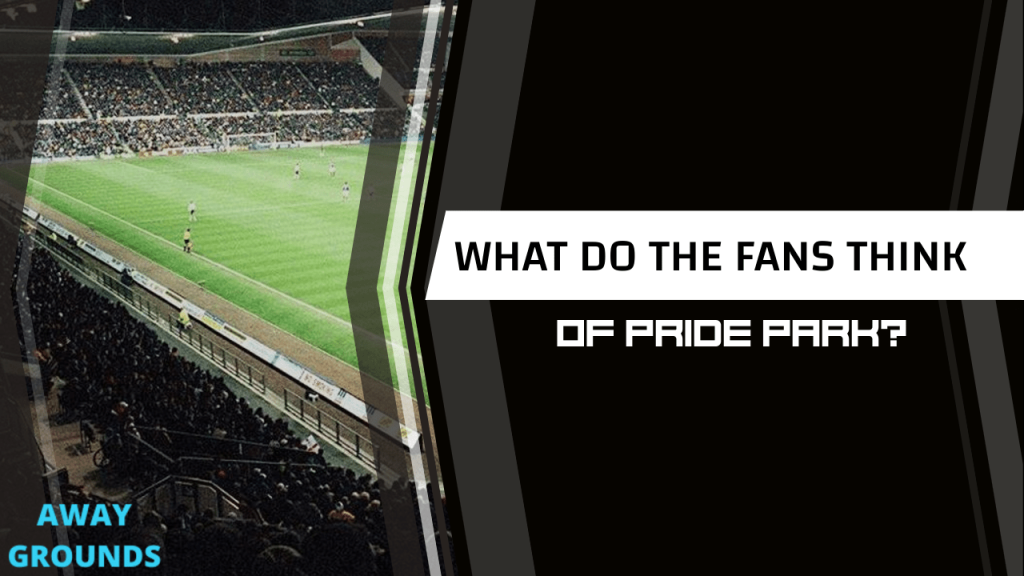 Few have been disappointed with the view of play from the away section. The range and quality of food on offer are also reported as excellent, with speedy service and no lengthy queues. Numerous TVs are located near the bars, so fans miss none of the action while waiting to be served.

Getting Tickets for Derby County FC

Derby County tickets can be purchased online or at the Pride Park Stadium club shop.

If tickets are still available on match day, they can be purchased at the stadium’s ticket office. Derby’s crowds, on the other hand, are among the best in the Championship, and they occasionally sell out a big game.

Ticket prices vary depending on the opponent but expect to spend anything from £30.00 for a ticket behind the goal to £36.00 for the best seats on the long sides for an average match.

Amazing, home to my team derby county. Atmosphere: amazing everything about this stadium is amazing! Would recommend to everyone looking for a good football match.

Always a cracking atmosphere whilst watching the Rams playing at home. Fun for all the family, a great stadium, with good facilities.

Derby’s old Baseball Ground was replaced with the iPro Stadium, formerly known as Pride Park Stadium, after further improvements to make it into an all-seater proved impracticable.

The team first considered moving away from the Baseball Ground in the early 1990s, but it took numerous failed attempts before finding a suitable location for a new stadium. The construction of Pride Park Stadium ultimately began in 1996, and the stadium was completed in just one year.

Queen Elizabeth II officially opened Pride Park Stadium on July 18, 1997. The first match took place roughly two weeks later when Italian side Sampdoria paid a friendly visit to the stadium. The sole goal of the game was scored by Vincenzo Montella, who scored the first goal at the stadium.

The stadium’s capacity was later increased by a few thousand seats in later years, bringing it to its current level.

When did Pride Park Stadium open?

What is Pride Park Stadium away end capacity?

The away end capacity at Pride Park Stadium is around 2,700.

Which is the away end at Pride Park Stadium?

Away fans at Pride Park Stadium are placed between the East and South stands in one part of the stadium. 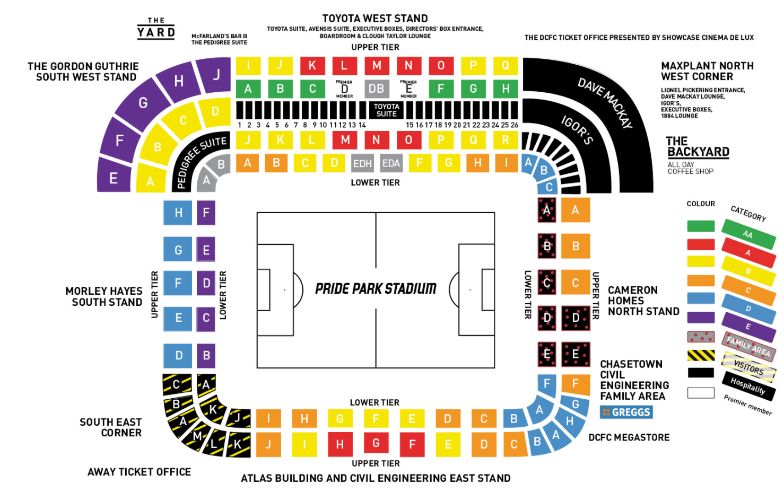 ClubDCFC hosts a variety of events at Pride Park Stadium throughout the year, from Christmas Parties to 80s Disco Nights.

There’s always something to do at Pride Park Stadium, no matter what time of year it is. Whether it’s a Father’s Day lunch or exhibitions, there’s something for everyone throughout the year.

Thank you for checking out our Pride Park Stadium guide.