Vicarage Road is an all-seater stadium, with a capacity of just under 20,000. It has been the home of Watford FC since 1922. The Main Stand, on the east side of the ground, is the oldest of the 4 stands and houses players’ changing rooms, directors’ box and press area. The only remaining part of the original stadium, it has been closed to spectators since 2004, due to health and safety concerns.

However, the club has plans for phased developments over a 3-year period, culminating in the redevelopment of the East Stand. The tow-tiered Rous Stand, named after former FIFA president Sir Stanley Rous, runs along the West side of the ground. This £3 million addition was built in 1986.The Vicarage Road Stand was constructed following the 1992-93 season. Previously an open terrace, the all-seater stand was built to comply with the recommendations of the Taylor Report, with a build cost of £2.3 million.

A partition was added in 2004, allowing the housing of both home and away support. The Rookery Stand, another former terrace, was constructed during the 1994-95 season, with a build cost of £1.6 million. Larger than the Vicarage Road stand, it has facilities on two levels. It also holds most of the club’s administrative areas, along with the club shop, which was moved from a site on Vicarage Road.

How to get to Vicarage Road

For satnav purposes, the postcode of Vicarage Road is WD18 0ER.

Drivers arriving from the North should exit the M1 at junction 5, following the A4008 into Watford. On nearing the town centre, follow signage for Watford General Hospital and the ground will soon become visible.

The nearest overland station is Watford High Street, a 10-minute walk away from the ground. 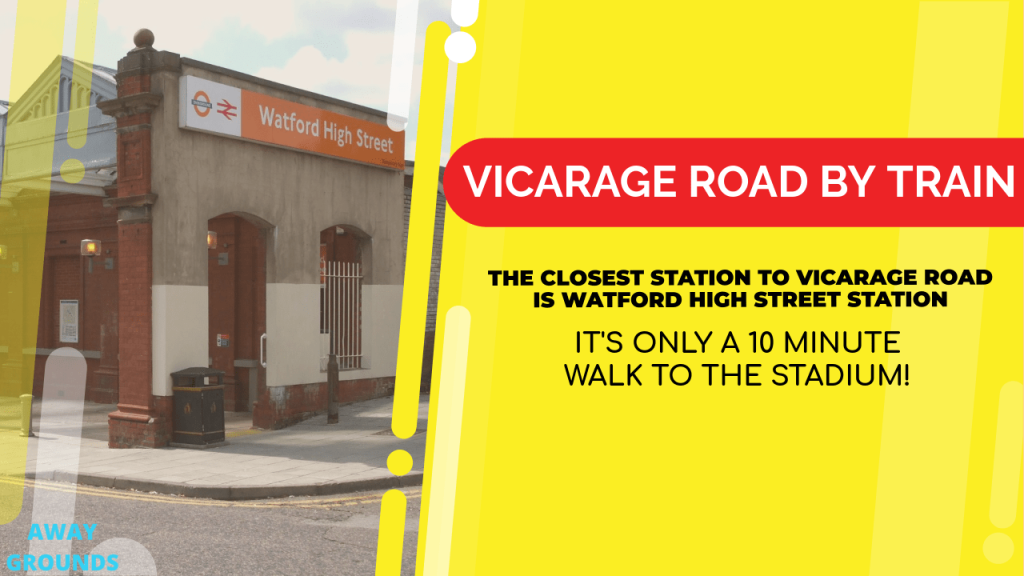 Watford tube station, on the Metropolitan Line, is under a mile from Vicarage Road. However, overland trains from London usually have a shorter journey time. Click here to check the current train timetables

The nearest airport is Heathrow, at a distance of about 13 miles, with frequent train and bus links to London. Click here to check the current flight times

There are several taxi companies in Watford that can take you to and from Vicarage Road. You can always prebook a private hire taxi, or hail a black cab on any highway.

Most visiting fans recommend parking at one of the industrial units near the ground which offer match day parking. 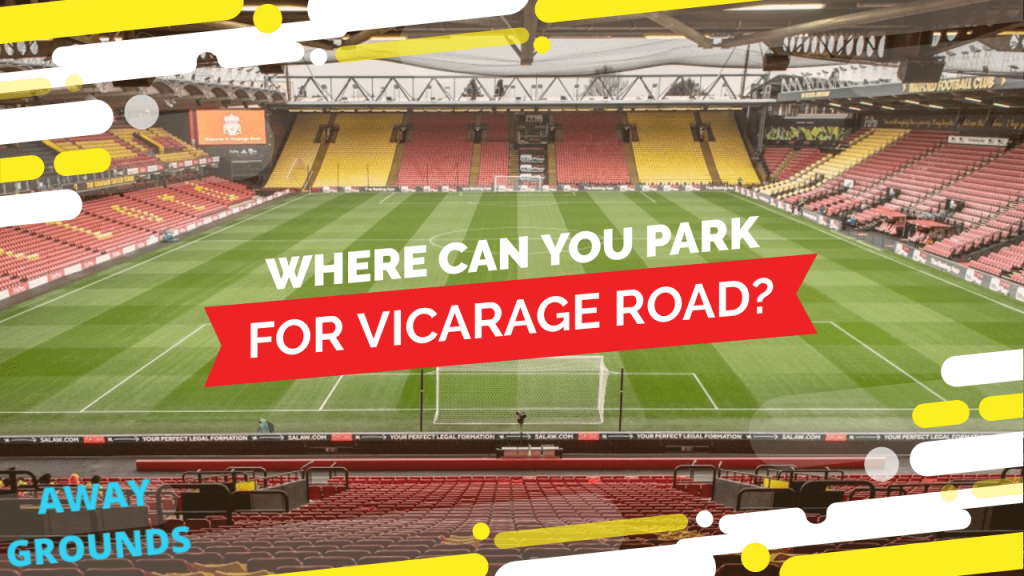 Reasonably priced parking is also available at the nearby Vicarage Road Girls’ School.

Away Friendly Pubs near Vicarage Road

The nearest pub to the ground, the Red Lion, is reported to be extremely partisan, and away fans are advised to steer well clear. Vicarage Road is within easy walking distance of the town centre, where several pubs on High Street are okay for away fans. 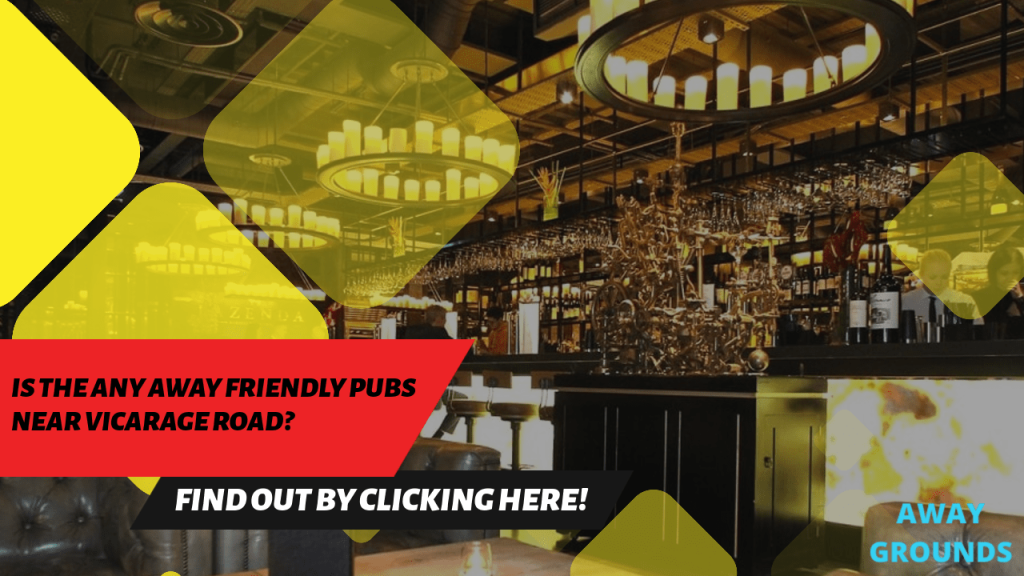 The Moon Under Water (a Wetherspoons) has been recommended by several fans as offering a friendly welcome. Closer to the ground, the Odd Fellows in Fearnley Street has received good reports. Just a couple of hundred yards and a few minutes walk from the ground, its beer garden barbeque has received excellent reviews. Alcohol is not available in the away section of the ground.

The Best Western White House Hotel, 27-31 Upton Road, Watford, WD18 0JF is located close to both the M1 and M25 motorways and a 15-minute walk from Vicarage Road. It offers professional and friendly service, with a fine-dining conservatory restaurant, free car parking and Wi-Fi. Guest reviews have been favourable with regard to cleanliness, comfort and service.

What have other Away Fans said about their trip to Vicarage Road?

Most visiting fans have noted that Vicarage Road has a traditional feel, but is in need of upgrading. Nearly all have pointed out the old East Stand as an eyesore. Facilities in the away section are described as adequate, though concourses are cramped. 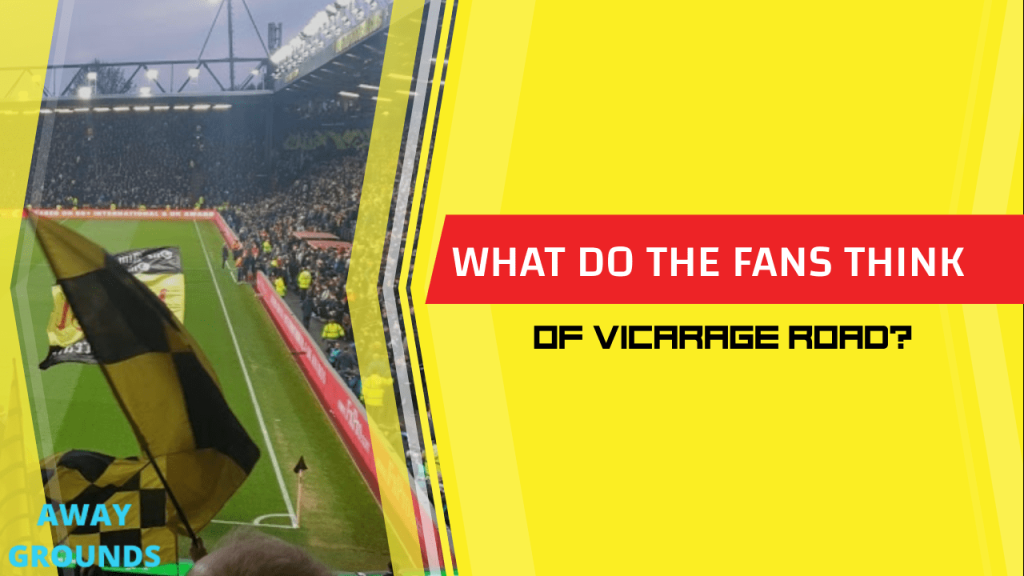 Many have reported a poor atmosphere within the ground, with little vocal support from the home fans.

Watford Football Club relocated to Vicarage Road in 1922 after 23 years at a ground on Cassio Road. On August 30, 1922, the team met Millwall in their debut match at the new stadium.

Vicarage Road had two tiny covered stands and several terraces back then. The Union Stand, for example, had been transported from Watford’s previous round on Cassio Road. The Union Structure was replaced with a new stand, the Shrodells Stand, about a decade later.

In the 1950s and 1960s, more improvements to the stadium were undertaken, including the Main Stand extension in 1969.

In 1986, the Shrodells Stand was once again replaced by a new stand. The new Rous Stand has two levels and brought corporate facilities to the ground level.

Two new stands were built at each ends in 1993 and 1995, in response to the Taylor report’s recommendations. Only the original main stand from 1922, as well as its addition, remained.

After the original section of the main stand was closed in 2004 due to safety issues, it was demolished in 2010 due to new worries about the structure’s condition.

The construction of a new stand was planned, but it was postponed until 2014, when the new Sir Elton John Stand opened. Following Watford’s promotion to the Premier League, the stand was expanded with more rows of seating closer to the pitch.

Getting tickets for Watford FC

If tickets are still available on the day of the game, they can be purchased at the Ticket Office, though Watford has sold out the majority of their games since returning to the Premier League.

With first-class hosting from Vicarage Road Stadium, Hertfordshire’s events venue will amaze you at your next private party, business gathering, or conference.

Their adaptable meeting rooms and suites are intended to accommodate the most memorable events in Watford, combining modern facilities with unmatched views across the pitch.

Absolutely love popping down to Vicarage Road on a match day. The staff are helpful and the atmosphere around the ground is awesome! It’s great that everyone puts so much effort into making every visit really special – thanks all! There’s nothing you can fault here – it’s excellent! 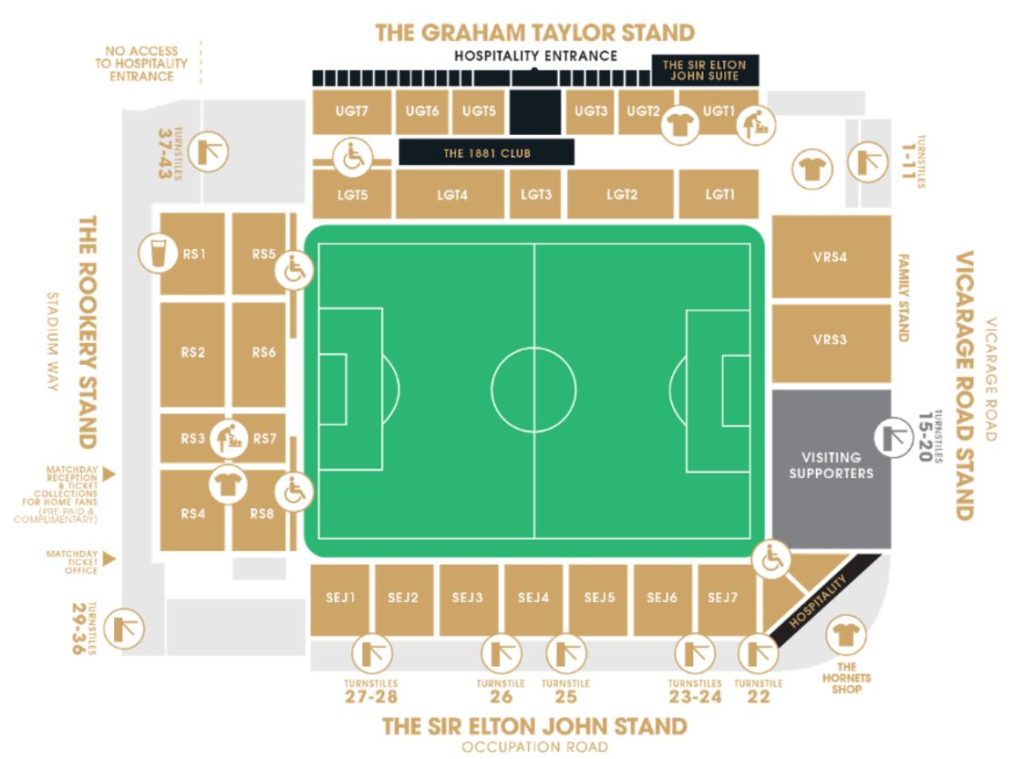 When did Watford move to Vicarage Road?

Where do away fans sit at Vicarage Road?

At Vicarage Road, the away fans stand at one end of the ground on the eastern side of the stadium.

When did Vicarage Road open?

Vicarage Road Stadium opened on the 30th of August 1922.

Which is the away end at Vicarage Road?

What is Vicarage Road away end capacity?

The capacity in the away end at Vicarage Road is around 2,200.

What is Watford's Stadium called?