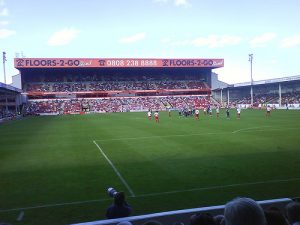 The Banks’s Stadium, still popularly known locally as the Bescot Stadium, is an all-seater venue, with a capacity of 11,300. It is the home ground of Walsall FC.

It was built in 1989 and opened in 1990 by Sir Stanley Matthews, replacing the club’s previous ground, Fellows Park, which was located a quarter of a mile away.

The Gilbert Alsop Stand was replaced by the new Floors- 2-Go Purple Stand in 2003. This large, two-tiered stand dominates the ground. At the opposite end is the Homeserve stand, which is allocated to away supporters. This is only about 15 rows high, topped by a small electronic scoreboard and a small TV gantry.

The stands at the sides of the ground are similar, with floodlights on their roofs and numerous supporting pillars. The club have been granted planning permission to re-develop the Homeserve end of the ground, incorporating a new stand similar to the Floors-2-Go Stand, raising the overall stadium capacity to 13,500.

How to get to the Banks’s Stadium

From the North, drivers should follow the M6 as far as junction 9, taking the A461 towards Walsall. Bear right onto Wallowes Lane (A4148) and turn right at the 2nd set of lights. The ground is on the left.

Drivers arriving from the South should exit the M6 at junction 7 and follow the A34 towards Walsall, being wary of the speed cameras on the dual carriageway. At the end of the dual carriageway, turn left at the Bell Inn pub into Walstead Road. After about 2 miles, the entrance to the away end of the ground is on the right.

The Banks’s Stadium has its own station (Bescot) situated behind the away end and just a short walk from the turnstiles. This station has regular services to and from Birmingham New Street, with a journey time of about 20 minutes. Click here to check the current train timetables

The nearest airport is Birmingham, at a distance of 13 miles. It has regular rail connections to Birmingham New Street station. Click here to check the current flight times

There are several taxi companies in Walsall that can take you to and from the Bescot. You can always prebook a private hire taxi, or hail a black cab on any highway.

Calling all Walsall Taxi Companies – Why not advertise your company here?.

The club has a large car park behind the away stand and reasonably priced parking is available at Bescot railway station. There is limited on-street parking in the side streets off Wallowes Lane, but visitors should resist the temptation of parking is the supermarket car park as several fans report having had their vehicles clamped.

Away Friendly Pubs near the Banks’s Stadium

The Fulbrook pub, near the ground, is very partisan and visitors have marked it as one to avoid. The King George V, in Wallowes Lane has been recommended by several away fans. It is a 15-minute walk from the stadium, but becomes extremely busy on match days. The Saddlers Club, at the stadium, admits limited numbers of away fans for a small charge, but this also becomes busy and early arrival is essential.

Hotels near the Banks’s Stadium

holiday inn express walsallThe Holiday Inn Express Walsall M6 J10, Tempus Ten, Tempus Drive, Walsall WS2 8TJ is located near the M6 motorway, less than a mile from Walsall town centre. Its air-conditioned rooms are modern and spacious, with Internet access and rates include a continental breakfast. The hotel bar is open 24 hours to residents. Guest reviews have noted excellent service and the hotel is quiet, despite its proximity to the motorway.holiday inn express walsall

The Compass Hotel Walsall, 20 Wolverhampton Road West, Bentley, Walsall WS2 0BS is on the outskirts of Walsall, near junction 10 of the M6. This modern hotel features modern lounge bar and restaurant areas, and has good leisure facilities including an indoor swimming pool, sauna and fitness centre. Free on-site parking is available.

Many visiting fans have been disappointed by the Banks’s Stadium, both in terms of looks and the facilities available inside the ground. The away section is reportedly cramped and the view of play impeded by the supporting pillars at the front. The catering facilities comprise food kiosks in the corners of the stand and their proximity to the toilets creates “traffic” problems, especially at half-time.

On the plus side, the covered stand allows even a small number of away fans to generate enough noise to create a vibrant atmosphere. Additionally, though obtaining food takes a long time, its quality is reportedly excellent. Overall, the majority of away fans report that any disappointment is countered by the relaxed atmosphere in and around the ground, with friendly home supporters and helpful stewards.

Which is the away end at Banks’s Stadium?

Away supporters are housed in the University of Wolverhampton Stand at Banks’s Stadium.

What is Banks’s Stadium away end capacity?

About 2,000 people can fit in the away end at Bank’s Stadium.