Building work commenced on the Britannia Stadium, in late 1996, as a replacement for Stoke’s former (now demolished) Victoria Ground.

With a build cost approaching £15 million, work was completed in August 1997. The all-seater stadium holds 28,383 supporters in four cantilever stands. The main West stand consists of two tiers of seating plus corporate and media facilities. Dressing rooms, offices, boardroom and the club merchandise outlet are positioned between the West and South stands.

Away fans are housed on one side (towards the Players Tunnel and Main Stand) of the South Stand at one end of the ground. Unusually, the teams access the pitch from one corner of the ground, between the South Stand and the West Stand. Subject to Stoke establishing themselves in the Premiership, the ground could be extended to accommodate over 30,000 spectators.

How to get to the Britannia Stadium

Drivers arriving from the South East are advised to follow the M1, exiting onto the A50 at junction 24, following signage for Stoke-on-Trent. From the South West, the M5 / M6 route is advised. Exit the M6 at junction 15, following the A500 as far as the A50 junction. Take the first exit from the A50. In each of the last 3 cases, the ground is visible from just before the A500 dual carriageway.

The nearest station to the Britannia Stadium is Stoke-on-Trent, on the mainline from Manchester Piccadilly to London Euston. The station is some 3 miles from the ground, so visiting fans are advised to take a taxi or catch a bus from nearby Glebe Street. 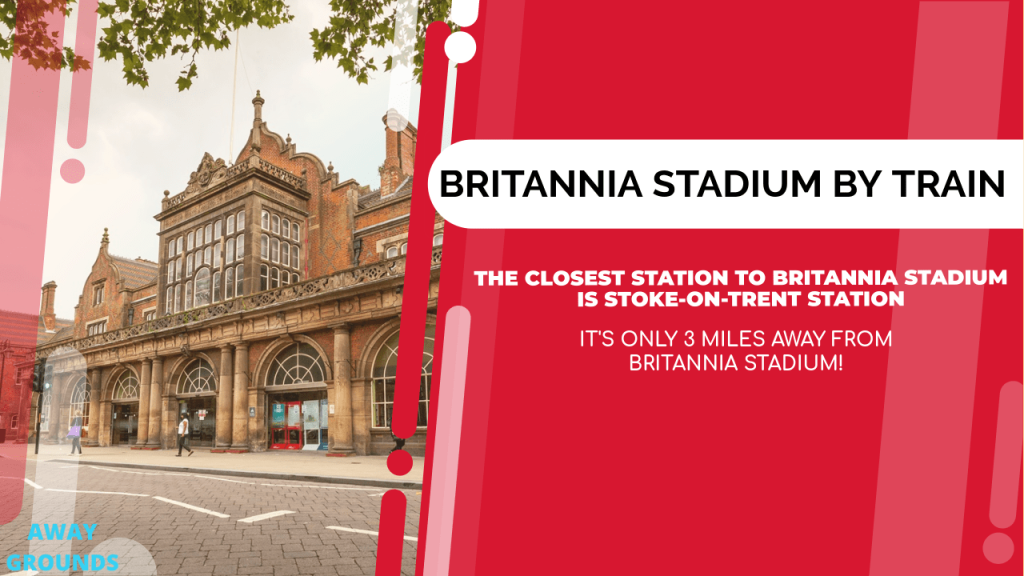 On exiting the station, turn right and follow Station road as far as the Roebuck Hotel, turning right into Leek Road. Cross the dual carriageway into Glebe Street. Buses depart at 15-minute intervals from the church on the left. After the match, return buses depart from behind the East Stand. Click here to check the current train timetables

The closest airport is East Midlands Airport, some 36 miles from the stadium, while Manchester International is about 44 miles away. Air travellers are advised to use Manchester airport, which offers frequent direct links to Stoke, with a journey time of just over an hour. Click here to check the current flight times

There are several taxi companies in Stoke-on-trent that can take you to and from the stadium. You can always prebook a private hire taxi, or hail a black cab on any highway.

Calling all Stoke-on-trent Taxi Companies – Why not advertise your company here?.

Visiting fans should not be tempted to park on waste ground near the Britannia, as the Local Authority is vigilant and a parking ticket is a certainty. For the official South car park, follow the A500 towards Stoke, exiting at the first junction and turning right at the large roundabout towards Stafford (A34). 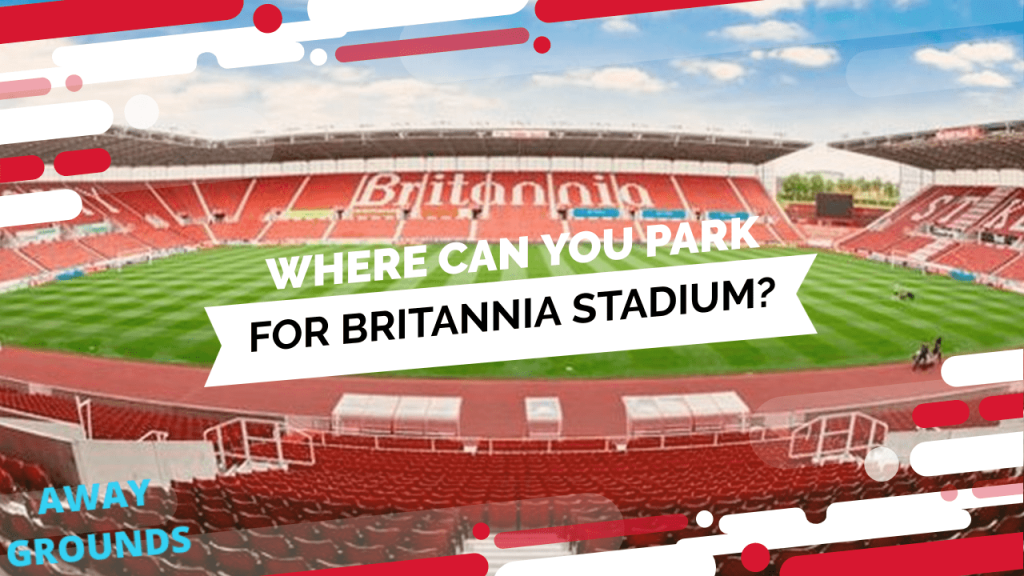 Turn left at the small roundabout and carry on for some 3 miles. Upon reaching a set of lights with industrial units on the right, turn left into Stanley Matthews Way. Limited parking may be found at sites near the old Victoria Ground. Follow the A500 past its junction with the A34 (the stadium is visible on the right). Exit the A500 at the next junction and turn left.

Away Friendly Pubs near the Britannia Stadium

Due to its isolated location, there are few pubs near the Britannia Stadium and most fans recommend getting a drink on the way into Stoke. However, there is a Harvester pub next to the ground, which is “away friendly” and offers reasonably priced parking. 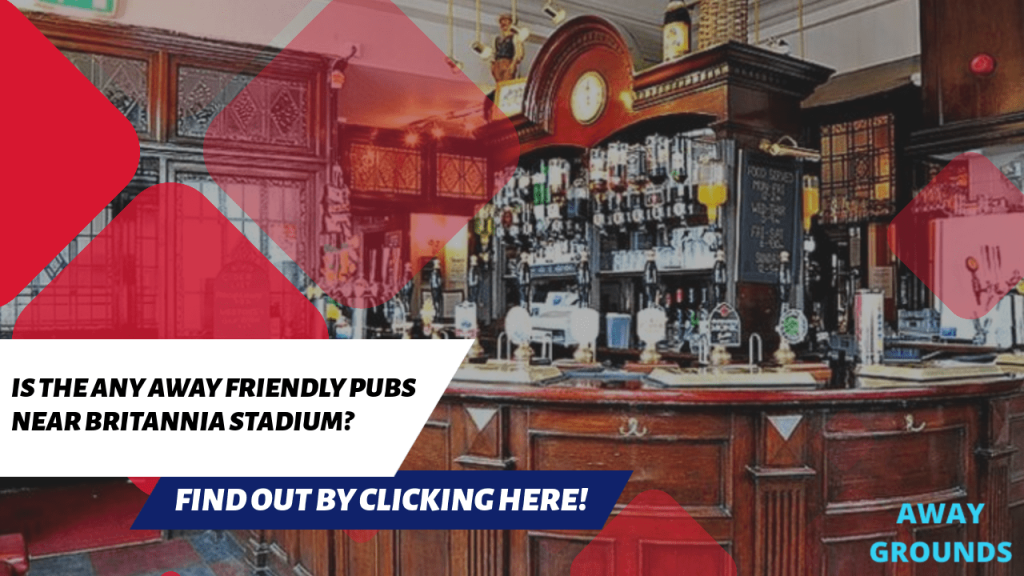 Inside the stadium, alcohol is served at a bar at the rear of the South Stand, though queues can be very long.

Hotels near the Britannia Stadium

A little further from the Britannia Stadium (just over 2 miles) The Holiday Inn Stoke on Trent, Clayton Road, Clayton, Stoke-on-Trent ST5 4DL is conveniently situated near junction 15 of the M6. Guest have remarked upon the friendly service, comfortable surroundings, excellent food and value for money. Free on-site parking is available.

What have other Away Fans said about their trip to the Britannia Stadium?

The majority of visiting fans have been impressed by the imposing, eye-catching appearance of the Britannia Stadium with its hilltop location. The covered South Stand, with windshields at either end has also been a hit with visiting fans. Though some visitors found it a little steep, the vast majority were impressed by the proximity to the playing action, the excellent view and ample legroom. 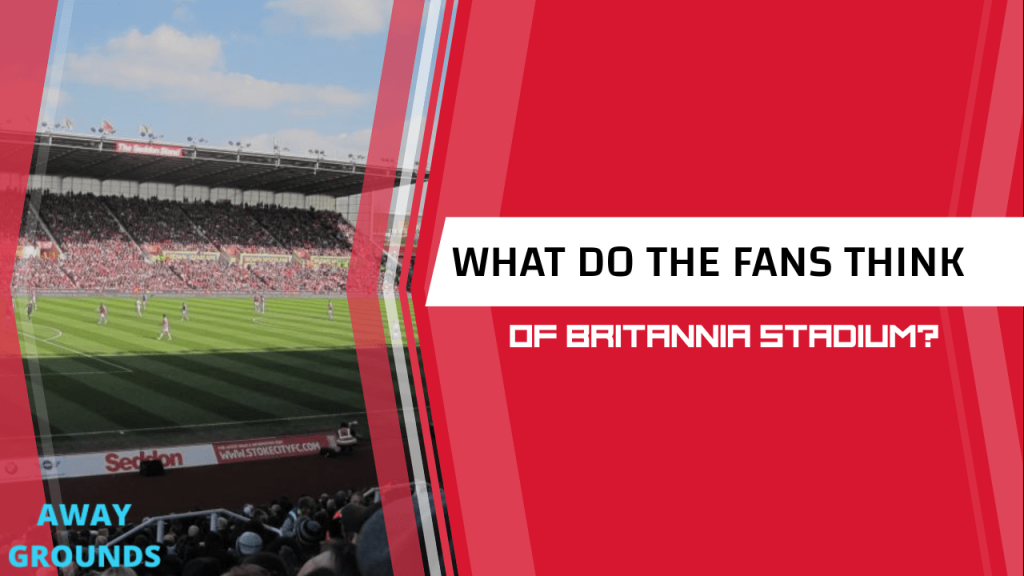 The proximity of the home fans does not generally appear to be a problem, with friendly banter exchanged between the two sets of supporters. The main complaint from visiting fans has been the lack of stewarding in the car parks after the match, leading to extensive delays in exiting the ground.

Tours of the bet365 Stadium are available every day of the week, giving fans complete access to areas and suites that they may never have seen before.

Visits to the first team locker rooms, executive boxes, the Sir Stanley Matthews Lounge, pitchside (including dugouts), and many other unique areas of the stadium are included.

Tours run about 45 minutes, are subject to availability, and must be scheduled two weeks in advance.

The all-seater stadium cost nearly £15 million to construct and was completed in time for the Taylor Report in January 1990, bringing the club up to standard after 115 years at the Victoria Ground.

By 1995, relocation was being examined, along with the potential of transforming the Victoria Ground into an all-seater stadium, and by early 1996, the decision to build a new stadium elsewhere had been finalised.

During the 1996-97 season, construction on the stadium proceeded. The Britannia Stadium originally opened its doors in August 1997, courtesy to a £1 million, 10-year sponsorship contract with the Britannia Building Society, which was essential in the project’s total funding. The Football Trust contributed another £4.5 million as a donation.

The stadium’s opening did not go as planned, as there was concern from the start about getting there, as the plans only covered one access road from the nearby A50, forcing spectators arriving from the city or the motorway to travel over a mile up the A50 to a roundabout at Sideway and then double-back the other way, causing massive traffic congestion.

Sir Stanley Matthews, at 82, gave the stadium its official opening speech. His ashes were buried beneath the stadium’s centre circle after his death in March 2000, and a statue in honour of various periods of his career was built outside the stadium.

The club’s supporters staged a protest against chairman Peter Coates, who then stepped down until returning in 2006.

After four seasons in third-tier football, Gunnar Gslason took over the club in November 1999. He returned control of the club to Peter Coates in May 2006, and the club shortly after acquired full ownership of the stadium in a £6 million transaction, following a previous joint-venture with Stoke-on-Trent City Council and Stoke-on-Trent Regeneration Ltd. In June 2016, the stadium’s name was changed to Bet365 Stadium.

Love match day, plus great for events. The new disabled facilities are five star. They have spent a lot of money improving it for disabled access

Great experience for all football fans. Atmosphere was great but wind is very chilling. Would be good if concerts could be held here again.

Getting Tickets for Stoke City

Tickets can be purchased online at tickets.stokecityfc.com, at the bet365 Stadium Ticket Office, or by calling 01782 367599 on matchday.

Fans interested in purchasing a group of ten or more tickets should send an email to [email protected] for additional information.

When did Stoke City move to the Britannia stadium?

Which is the away end at Britannia Stadium?

Away fans visiting the Bet365 Stadium are seated on one side of the Marston’s Pedigree Stand, behind the goal (nearest the Q-railing Stand).

What is Stoke City away allocation?

The Stoke away allocation is roughly 2,800 seats, though this is usually expanded for cup games. 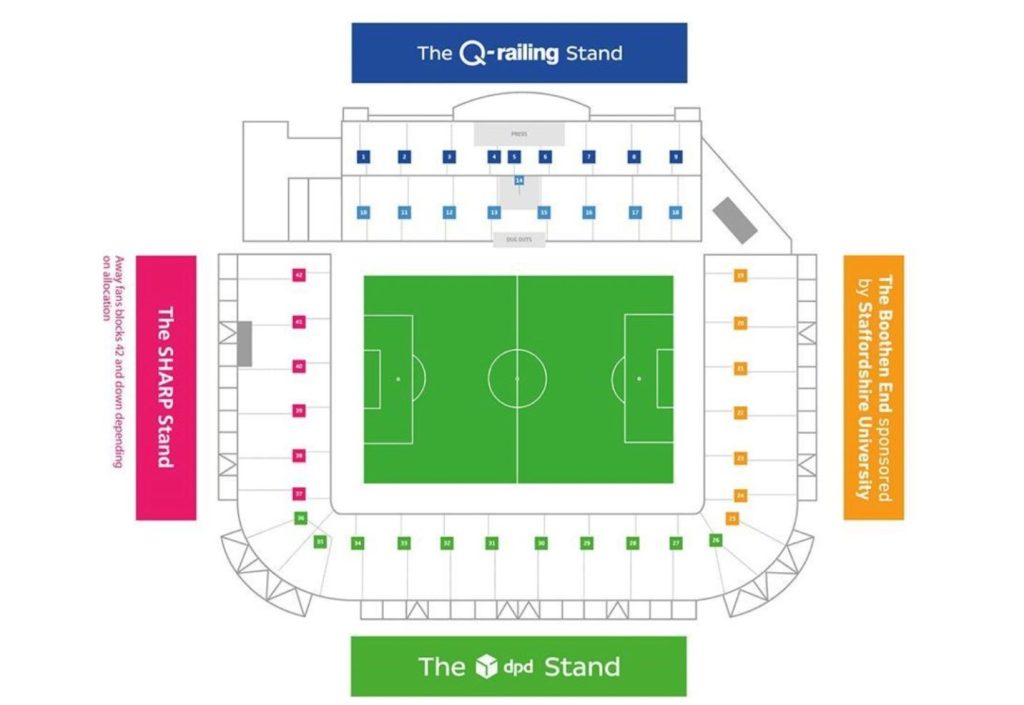 Britannia Stadium is a great stadium for all types of events with fantastic facilities, views and a brilliant location.

The Bet365 Stadium is the ideal location for a number of occasions including birthday parties, dining occasions, fundraising events, weddings, anniversaries and celebrations, Christmas parties, gatherings, meetings and conferences.