The Spotland Stadium, home to Rochdale FC was built in 1920, and at one time had the smallest seated area in the Football League.

Its current capacity is 10,249. It has been greatly improved by the construction of 3 new stands in the last decade, the latest being the Westrose Leisure Stand, opened during the 2000-01 season, replacing a former terrace.

Opposite is the single tier, all-seater Horners Main Stand, with executive boxes at the rear. At one end, the all-seater WMG (Pearl Street) Stand serves as a Family Stand. The Thwaites Beer (Sandy Lane) end is the only remaining terrace and is now covered.

How to get to Spotland

The Spotland Stadium is located in Sandy Lane, Rochdale OL11 5DR, just over 2 miles from the M62.

Drivers should leave the M62 at junction 20, following signs for Rochdale / A627(M). At the end of the A627(M), take the left hand lane and turn left at the traffic lights. Approaching the next roundabout, get into the middle lane and go straight on into Roch Valley Way. At the next crossroads, which has the Cemetery Hotel on the corner, go straight on into Sandy Lane and the ground is on the right after about ¾ mile.

Rochdale station, which is served by trains from Manchester Victoria and Leeds, is about 2½ miles and a 35-minute walk from the ground and most visiting fans recommend getting a taxi. However, for those with excess energy, cross the roundabout outside the station, keeping left into Lower Tweedale Street. At its end, turn right into Manchester Road. Having passed Drake Street, cross the dual carriageway at the pedestrian crossing and continue in the same direction as previously. 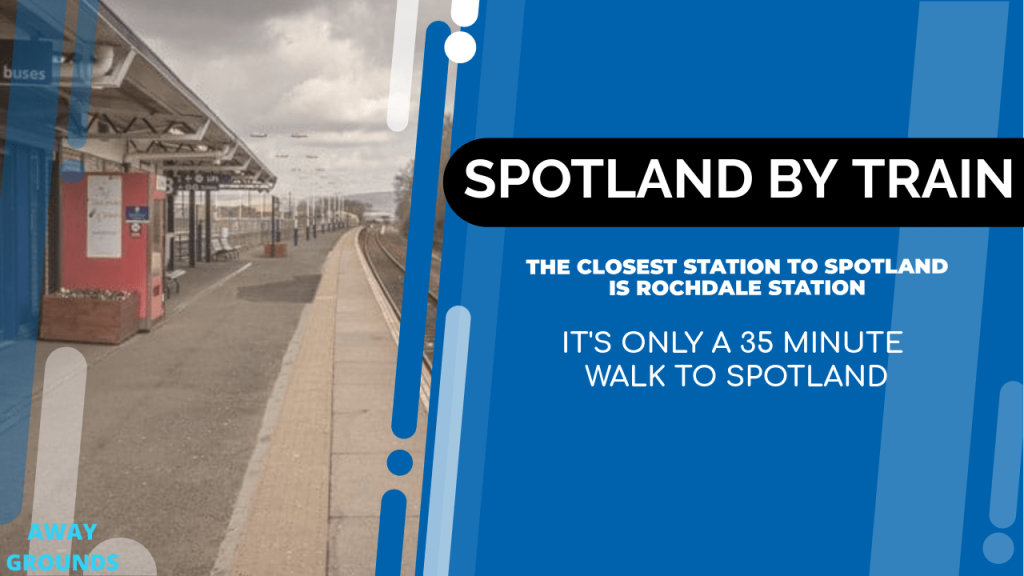 Turn left in Dane Street, which leads into Mellor Street. At the end of Mellor Street, turn left into Spotland Road and left again into Willbutts Lane for the ground. Click here to check the current train timetables

The nearest airport is Manchester International, at a distance of 19 miles. Air travellers should catch one of the frequent trains to Manchester Piccadilly and thence to Manchester Victoria which provides a direct rail link to Rochdale. Total journey time from the airport to Rochdale is about 45 minutes. Click here to check the current flight times

There are several taxi companies in Rochdale that can take you to and from Spotland. You can always prebook a private hire taxi, or hail a black cab on any highway.

Calling all Rochdale Taxi Companies – Why not advertise your company here?.

Car parking at the ground is restricted to permit holders. However, there is a match day parking facility at Oulder Hill School. This is on the left side of Sandy Lane, on the way up to the ground, but does leave a 10-minute uphill walk to Spotland. 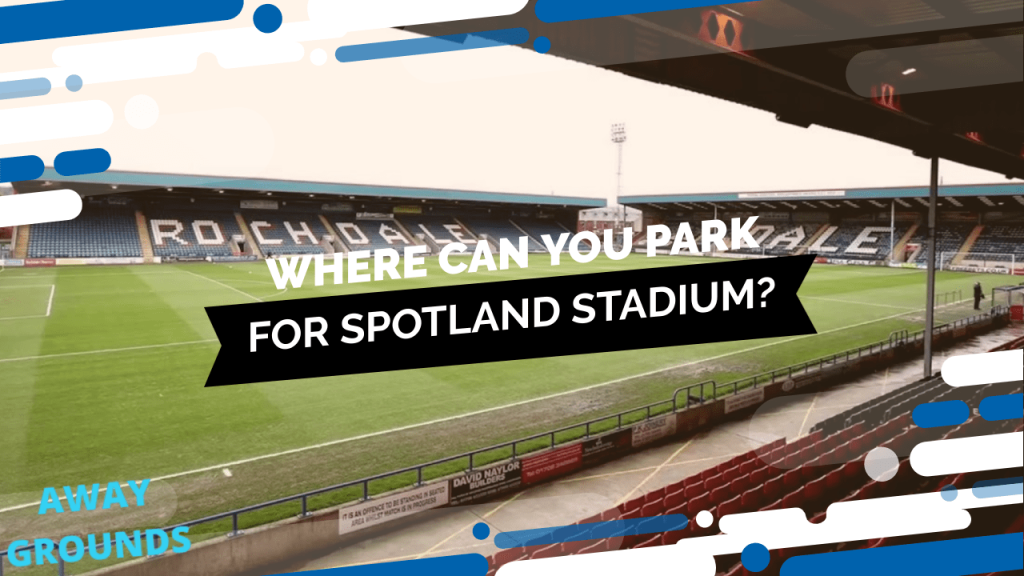 Otherwise, there is plenty of street parking within a reasonable distance of the ground, though visiting fans should be aware of the “residents only” parking scheme which operates in the immediate vicinity of the ground.

Away Friendly Pubs near Spotland

The Church pub, a few minutes walk along Willbutts Lane, appears to be the favourite of visiting supporters. At the ground, there is the Studds bar, underneath the Pearl Street Stand and the Ratcliffe Arms, near the car park entrance, on Sandy Lane. The latter usually offers a pleasant mix of home and away fans and has Sky TV. 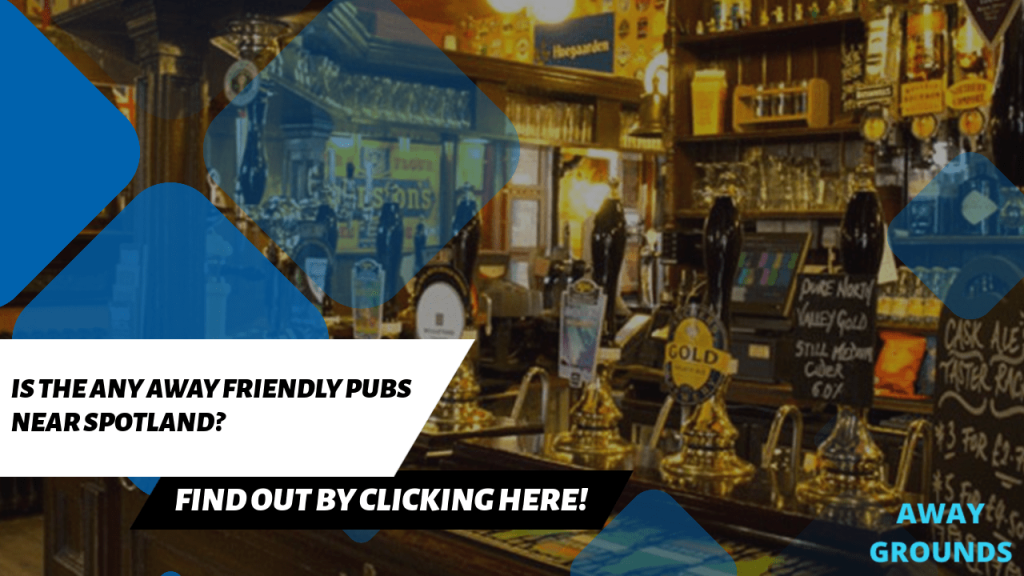 For early arrivals, the unfortunately-named Cemetery Hotel, at the bottom of Sandy Lane, near its junction with Bury Road, is also recommended. This historic pub offers comfortable, friendly surroundings and a good range of real ales. Alcohol is also available inside the ground, but it is cans and plastic glasses.

Away supporters have reported few complaints regarding the facilities and views of play from the away section. Excellent acoustics allow even a moderate away following to generate some noise. Coupled with the singing of the home fans, accompanied by a drummer and “Tom Hark” echoing around the ground if Rochdale score, this creates an effervescent atmosphere within the ground. 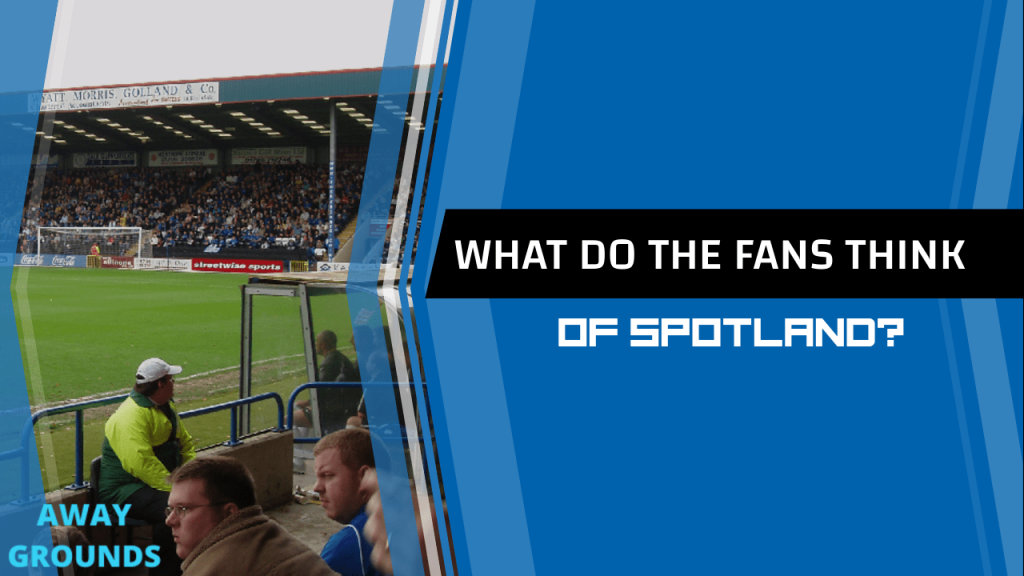 Along with friendly, knowledgeable home fans, good stewards and a great range of pies offered, this has led to several fans noting that Spotland has all the elements required for a thoroughly enjoyable day out.

Which is the away end at Spotland?

On one side of the Willbutts Lane Stand at Spotland, away supporters visiting Spotland (also known as the Crown Oil Arena) can be found.

What is Spotland away end capacity?

The capacity for the away end at Spotland is around 3,500.