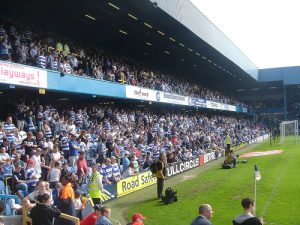 Loftus Road is an all-seater stadium, with a capacity of just over 19,000.

Queens Park Rangers took up residence in 1917, after their Park Royal ground was commandeered by the army. In 1969, the South Africa Road (South) stand was constructed, replacing open terracing.

In 1972, a new stand was completed in Ellerslie Road, replacing the tin-roofed grandstand at the North side of the ground.

Further new stands were opened in 1980 and 1981 at the East (School End) and West (Loftus Road) ends of the ground. Seating was installed in the lower tier of the Loftus Road stand in the summer of 1994.

How to get to Loftus Road 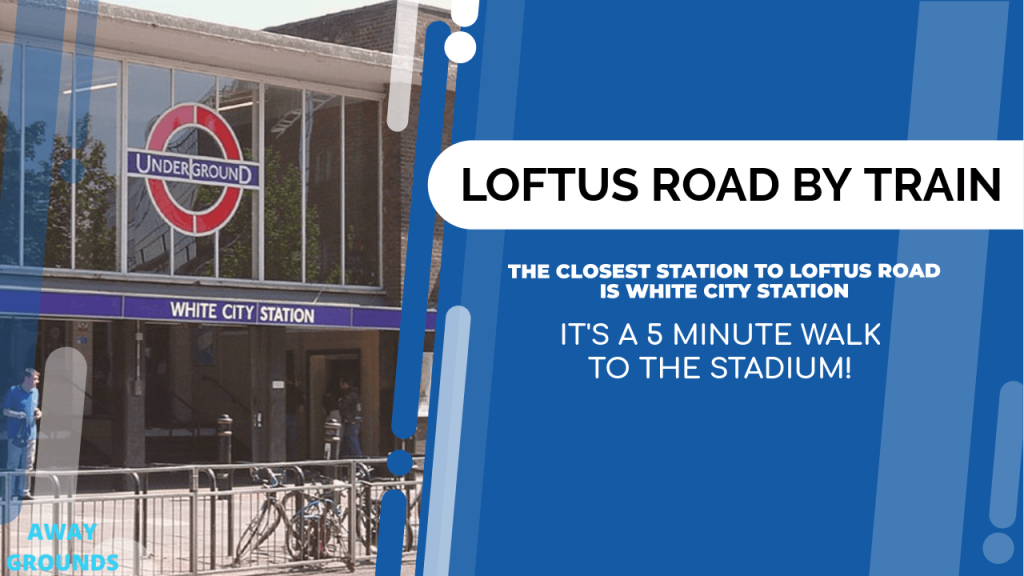 Several visitors have pointed out that Queen’s Park tube station is nowhere near Loftus Road. Click here to check the current train timetables

Heathrow is the nearest airport, just over 10 miles from Loftus Road. There are frequent train, tube and coach links to London. Click here to check the current flight times

There are several taxi companies in London that can take you to and from Loftus Road. You can always prebook a private hire taxi, or hail a black cab on any highway.

A number of restricted parking zones operate around the stadium and South Africa Road is closed to traffic an hour before kick-off. A similar closure applies following the match. Visitors have advised the avoidance of the limited “Pay and Display” parking in Dorando Close as these a subject to lengthy delays due to the above closure. 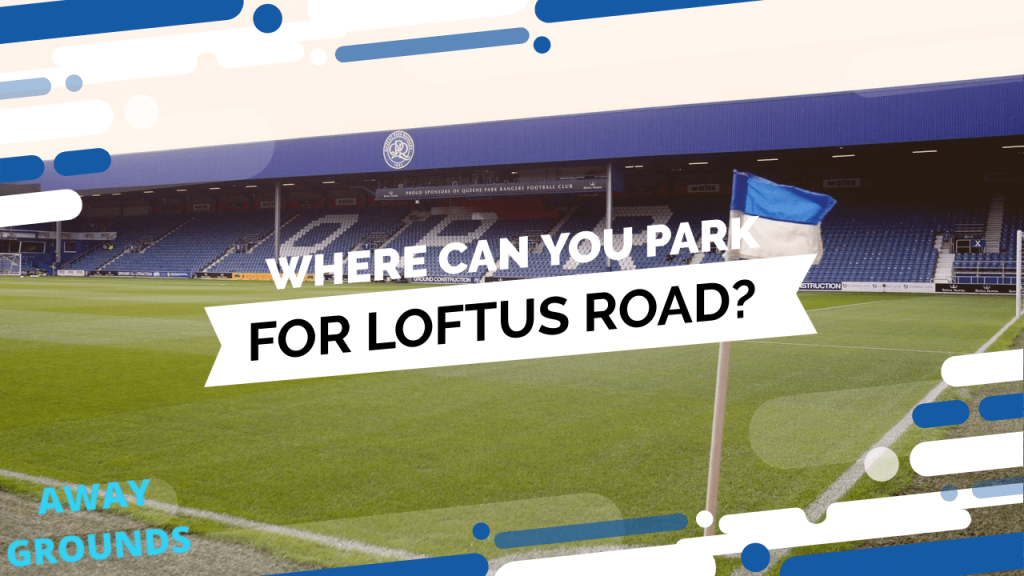 Several away fans have recommended the car park opposite the BBC TV centre, at the end of Silver Road on the Ariel Way industrial estate. However, spaces are limited so early arrival is recommended. Limited on-street parking is also available in this area.

Away Friendly Pubs near Loftus Road

Near the ground, the Springbok, which had been used by visiting supporters for many years, is now a “home fans only” pub. However, several pubs in the Shepherd’s Bush Green area are reported to offer a friendly welcome to away fans. 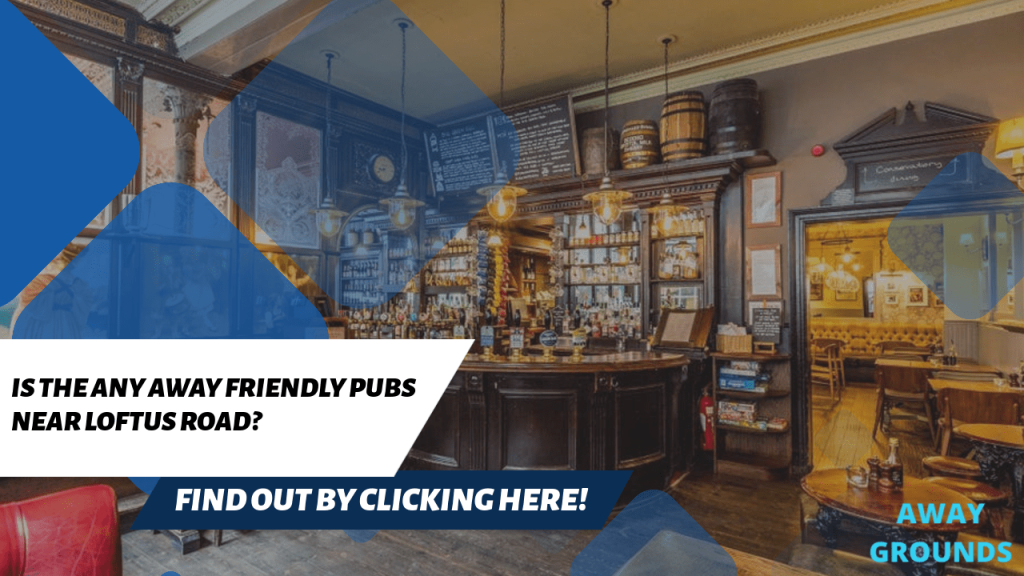 On exiting Shepherd’s Bush Market tube station (see above), turn left and the green is a short distance on the right. Recommended pubs in this area include O’Neills and Walkabout. Alternatively, there is a Wetherspoons in the “Vue” retail complex, opposite the entrance to Shepherd’s Bush tube station.

The Express By Holiday Inn London-Hammersmith, 124 King Street, Hammersmith, London W6 0QU is within 1½ miles of Loftus Road and guest reviews have been generally favourable, though some have found it a little expensive. The hotel is fully air-conditioned and just a 10-minute walk from Hammersmith tube station, giving easy access to all parts of the city. On-site parking is available.

The Novotel London West, 1 Shortlands, Hammersmith, London W6 8DR is also within walking distance of the ground. This multiple award-winning hotel has attracted excellent customer reviews for its facilities, staff and overall value for money. The hotel also offers a restaurant, 2 bars, a beauty salon, a business centre, access to a nearby fitness centre and on-site car parking, at an additional cost.

What have other Away Fans said about their trip to Loftus Road?

A common complaint amongst away fans has been the length of time it takes to get through the turnstiles at Loftus Road, resulting in some missing the start of the game. Arrival at the entrance to the ground at least 30 minutes prior to kick-off is definitely recommended. Many visiting fans have reported that, although it is a relatively small ground, the atmosphere is often poor. Additionally, the rows of seats are very close together, making legroom uncomfortably tight. 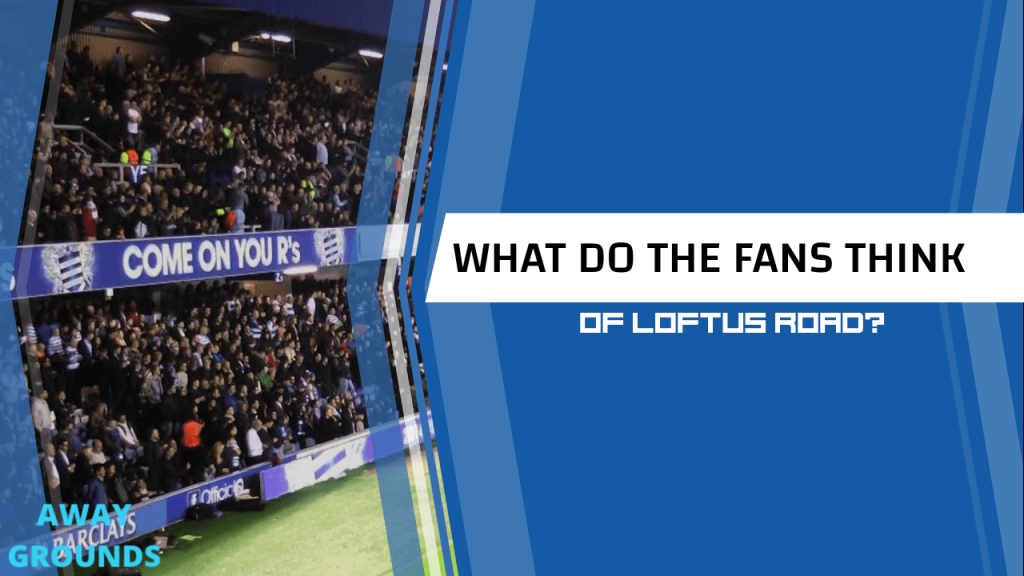 There is usually a large police presence at the ground, but few visitors have reported problems, as the atmosphere tends to be friendly and relaxed. On the plus side, the away section is close to the pitch, giving excellent views of play. Furthermore, the quality of food served within the ground is reported as excellent, with very prompt service. The only disappointment observed has been that alcohol is not available in the away end.

Loftus Road was built in 1904, but QPR did not move to the ground until 1917. QPR transported one covered seating stand from Park Royal, and the remainder of the stadium was open terraces.

QPR moved to neighbouring White City Stadium in 1931 after being dissatisfied with their current home but returned to Loftus Road soon after. A new covered patio was added in 1938, but there were few other improvements in the following decades.

QPR returned to White City Stadium in the early 1960s, but only stayed for one season.

With the erection of the South Africa Road and Ellerslie Road stands in the late 1960s and early 1970s, Loftus Road took on its current appearance, increasing capacity to almost 35,000 people. The two stands at each end were constructed in 1980 and 1981.

The stadium was converted to an all-seater in the 1990s, reducing capacity to under 20,000 seats.

While Craven Cottage was being refurbished, Fulham played their home matches at Loftus Road between 2002 and 2004.

QPR is now looking towards moving to a new stadium, which they would like to build in a different part of West London. There haven’t been any specific plans revealed yet.

Getting Tickets for Queens Park Rangers

Tickets can also be purchased at the box office prior to the start of the game if they are still available. Even if QPR does not sell out every game in the Premier League, it is recommended to get tickets ahead of time.

Tickets for the cheapest category range from £30.00 to £35.00 for a ticket behind the goal and between £30.00 and £50.00 for a seat on one of the sides, depending on the opponent. The cost of a top match begins at £50.00. Although some restricted view tickets are marginally less expensive, they are not advised.

Greatest stadium you could ever go to, on top of the players and can almost touch them from throw ins. Unbelievable atmosphere with fans being so close together you have to see it to believe it.

Amazing Stadium. One of only a few ‘proper’ British box style stadiums with huge four corner flood lights. Small, compact ground which makes for a great atmosphere. People very friendly, food is of very good quality and fairly priced. Well worth a visit to watch some football.

When did Loftus Road stadium open?

Loftus Road stadium opened on the 11th of October 1904.

What is the capacity at Loftus Road stadium?

The maximum capacity at Loftus Road stadium is 18,439.

What is Loftus Road away end capacity?

The away end capacity for Loftus Road is around 1,800.

Which is the away end at Loftus Road?

Away fans at Loftus Road are seated in the upper tier of the School End at the Kiyan Prince Foundation Stadium. 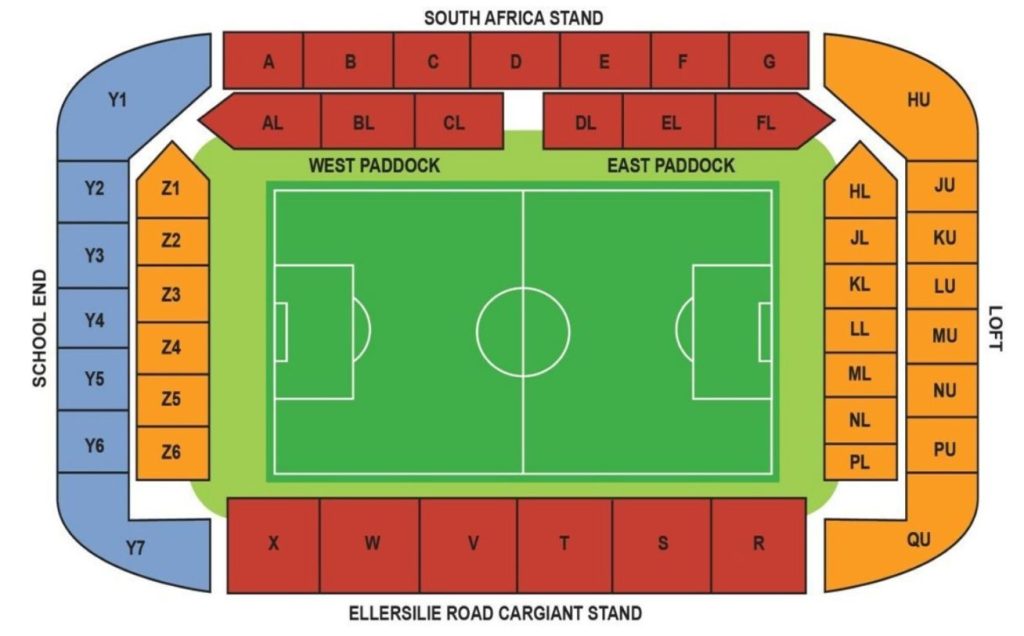 From the time you arrive at the Queens Park Rangers Stadium on a matchday, you will be treated to some of the best hospitality in English football, impeccable service, and a one-of-a-kind atmosphere that can only be found at the Kiyan Prince Foundation Stadium.

QPR is happy to provide a variety of luxurious restaurants and private suites to meet all of your hospitality needs. So whether you’re entertaining clients, honouring employees, or commemorating a particular occasion, we’ve got a package for you.