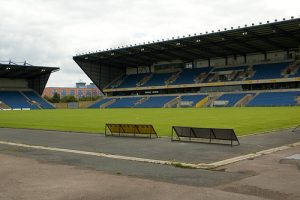 Oxford United moved to the Kassam Stadium, from their former Manor Ground home in the summer of 2001. The new, purpose-built stadium in South Oxford had a build cost in the region of £15m and is named after former chairman Firoz Kassam.

The 12,500-capacity stadium is unusual in that it has only 3 sides, with the western end of the ground currently unused. The 3 stands are of good size, completely covered and of roughly equal height. The two-tiered South Stand is a particularly impressive structure, with a row of 28 executive boxes and police control / press boxes at its rear. The remaining 2 stands are single-tiered; the Oxford Mail Stand, at the eastern end and the North Stand, which has several peculiar looking floodlights protruding from its roof. The North Stand houses the away supporters, either the section towards the open western end of the ground or the whole stand, dependent on the numbers of visiting fans attending. Foundations for a 4th stand, at the open end of the ground are in place, although construction of such a stand is unlikely to commence for the foreseeable future.

How to get to the Kassam Stadium

For drivers arriving from both North and South, the ground is well signed, by way of brown football signs, from all major routes into Oxford. The stadium is located between the Oxford Science Park and the Blackbird Leys Estate. From the A423 Ring Road, follow the A4074 towards Reading. Having passed a roundabout with an adjacent Sainsbury supermarket, take the next left, following signs for “Cowley / Wallington / Oxford Science Park.” The stadium will eventually become visible on the left.

The nearest railway station is Oxford, in excess of 4 miles from the Kassam Stadium and a walk that should be attempted by only the fittest away fans. Bus service no. 5 runs regularly from bus stop R2 at the station, to Knights Road in Blackbird Leys, leaving only a short walk to the ground. The service operates every 5 minutes on Saturday afternoons and about every 10 minutes on midweek evenings. Taxis are also available, but they are expensive.

The nearest airport is Heathrow, at a distance of 45 miles.

There are several taxi companies in Oxford that can take you to and from the Kassam Stadium. You can always prebook a private hire taxi, or hail a black cab on any highway.

The stadium has a 1,600 free car parking bays, but these, along with the additional 400 free spaces at the Ozone complex tend to fill quickly and very early arrival is advised. Late arrivals should avoid parking on grass verges, as local traffic wardens are particularly vigilant!

Away Friendly Pubs near the Kassam Stadium

The nearest “away friendly” pub is the Priory, behind the car park at the western end of the ground. If offers large screen Sky TV, along with a range of food and a barbecue if the weather is suitable. However, it can become uncomfortably crowded. The Express By Holiday Inn Hotel (see below) has a fair sized bar, welcomes away supporters and offers Sky Television.

The bowling alley in the Ozone complex (see below) has a bar, fast food outlet and Sky TV, whilst there is a Chinese buffet restaurant nearby. Additionally, alcohol is served within the ground.

Hotels near the Kassam Stadium

What have other Away Fans said about the Kassam Stadium?

Most away fans have found their trip to the Kassam Stadium an enjoyable, friendly experience. The new ground is a vast improvement on the old Manor Ground, with good facilities, excellent views of the playing action and seating with plenty of leg room. The atmosphere within the stadium is reportedly excellent, with impressive vocal support from the home fans in the Oxford Mail Stand. The stewards are reported as being accommodating and helpful, leading to a relaxed day out.

There is a good range of refreshments offered, including the famous Chicken Balti Pie. However, there have been several complaints regarding the time taken to be served and refreshment outlets running out of food and drink. Another major disappointment amongst visiting fans is the large gaps in the corners of the ground, which means the stands are set a good distance from the pitch and with cold winds blowing at some matches. Another cause for complaint has been lengthy delays in exiting the car park, which has only 2 exits.

Construction on The Kassam Stadium, which replaced the club’s previous Manor Ground, began in 1996 but was delayed in 1997 due to financial difficulties and did not continue until 2000.

On the 4th of August 2001, the Kassam Stadium officially inaugurated with a friendly match between Oxford and Crystal Palace (1-1).

The stadium was initially designed to hold 15,000 people, but only three of the four stands were completed, leaving one short end uncovered.

Oxford United tickets can be purchased online or in person at the club shop at the stadium or at the Covered Market in Oxford’s city centre.

On the day of the match, tickets can also be purchased at the gate. Although Oxford does not frequently sell out, it is nevertheless advisable to book in advance for high-profile matches.

Which is the away end at Kassam Stadium?

The west (open) end of the North Stand is reserved for visiting fans at Kassam Stadium.

What is Kassam Stadium away end capacity?

The capacity of the Kassam Stadium away end is around 5,000.