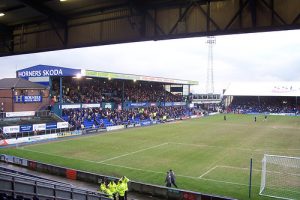 The Boundary Park stadium currently has an all-seated capacity of 10,638. Ironically, it became an all-seater venue during the 1994-95 season, the season following Oldham’s relegation from the Premier League. Currently, the ground comprises just 3 sides, with a new stand under construction on the Broadway side of the ground, opposite the Main Stand.

The Rochdale Road End is occupied by a large, covered, all-seater stand with windshields on both sides and an electric scoreboard on its roof. The Chadderton Road Stand at the other end is smaller, but also covered with windshields on both sides. On one side of the ground is the old, two tiered Main Stand. This used to be terraced at the front, but seating has been installed in this area. The “Oldham Arena” project, announced in 2007, was a plan to redevelop the ground into a 16,000 capacity stadium with 3 new stands, hotel and leisure centre.

The plan was put on hold due to the economic downturn, and the club investigated moving to a new purpose-built stadium in Failsworth. This was an unpopular move with fans, as Failsworth has a Manchester postcode, and lies just three miles from the Etihad Stadium. The move fell apart when the Charities Commission turned down Oldham’s application, and the club again looked to redevelop Boundary Park instead, although it is anyones guess when/if this will happen.

How to Get to Boundary Park

Drivers coming from both North and South should follow the M62 as far as junction 20, taking the A627(M) towards Oldham. Take the second slip road off the A627(M) following signage for Royton (A663). Turn left at the large roundabout onto the A663 towards Royton (beware 30 m.p.h. speed cameras!) Boundary Park is visible on the right.

Oldham Werneth station, which is served by North West Trains on the Oldham-Rochdale loop, is about a 15-minute walk from Boundary Park. On exiting the station, turn right into Featherstall Road South and follow it for about ¾ mile, through one set of lights and straight across the small roundabout near Tesco. 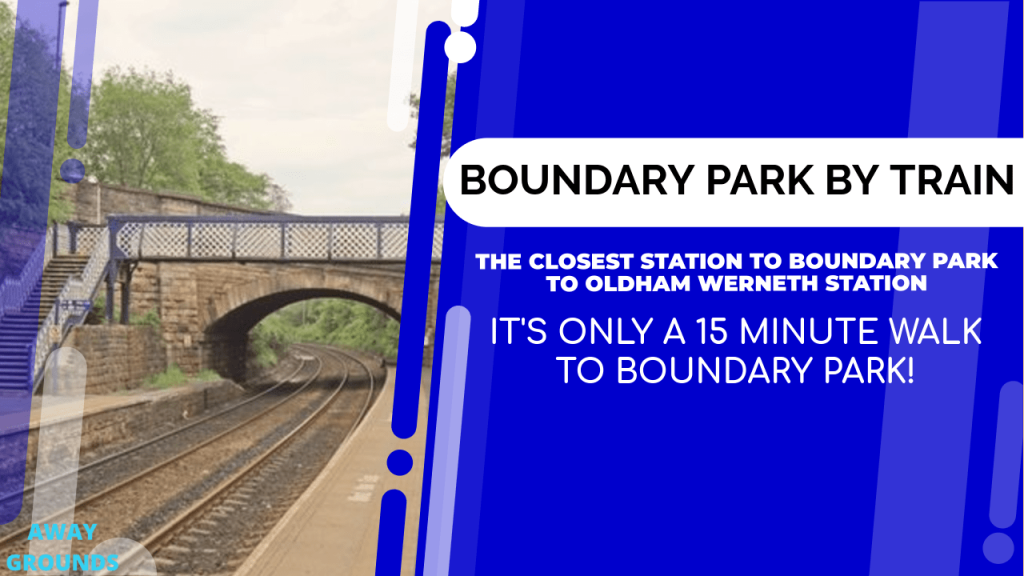 At the large roundabout, turn left (Chadderton Way) and cross the road via the underpass. After about ¼ mile, turn right into Boundary Park Road. At the end, turn right into Sheepfoot Lane and go past the main stand to reach the away section. Click here to check the current train timetables

The nearest airport is Manchester International, at a distance of 15 miles. Rail and Metro links are available to Oldham Werneth station, via Manchester Victoria and Manchester Piccadilly. Total journey time is about 1½ hours. Click here to check the current flight times

There are several taxi companies in Oldham that can take you to and from Boundary Park. You can always prebook a private hire taxi, or hail a black cab on any highway.

Calling all Oldham Taxi Companies – Why not advertise your company here?.

Visiting fans advise that there is plenty of parking available at the ground, in a large car park to the rear, which can be accessed from Hilbre Avenue. 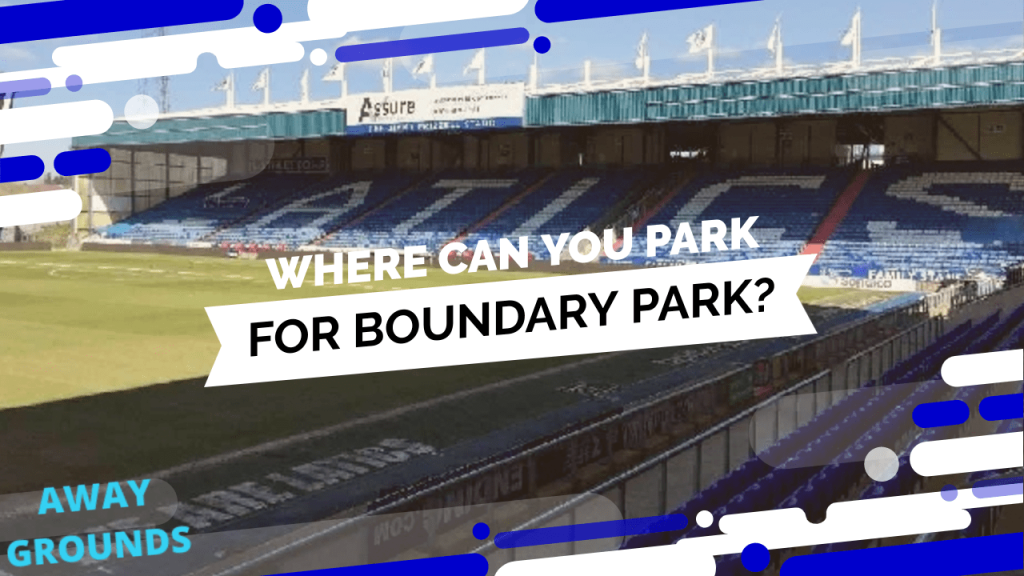 Several away fans have recommended parking at the rear of the Rifle Range pub, on Burnley Road, for a speedy getaway following the match.

Away Friendly Pubs Near Boundary Park

The Old Grey Mare, on Oldham Road, has been recommended by a number of visiting supporters.

It reportedly offers a particularly warm welcome to away fans and serves a very good selection of beers. To reach the Old Grey Mare, walk to the top of Sheepfoot Lane, turn left at the newsagents and then the pub is about 100 yards on the right. 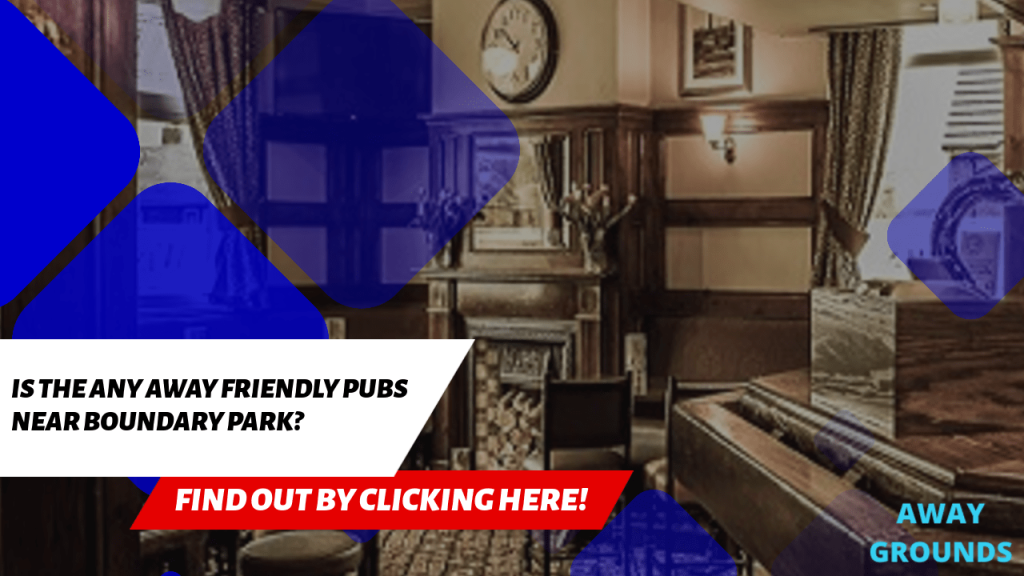 Several pubs on the other side of Sheepfoot Lane have been the subject of encouraging reports. These include the Queens, and The Rifle Range, on Burnley Road, which is about a 10-minute walk from the ground. It is reported as a very friendly, accommodating pub, with a family room, TV screens, good food, local ale and a beer garden.

The Holiday Inn Manchester Central Park (pictured right), 888 Oldham Road, Manchester, M40 2AG, opened in 2005, is just over 4 miles from Boundary Park. It offers contemporary styling and modern facilities with free resident parking, and comes recommended by many away fans.

Most visiting fans have found the home supporters to be particularly welcoming and there have been few complaints about the excellent views of play from the away section. The atmosphere is also helped by a drummer in the home section. Facilities are generally reported as adequate, though toilets are a little cramped and food outlets sell out quickly. 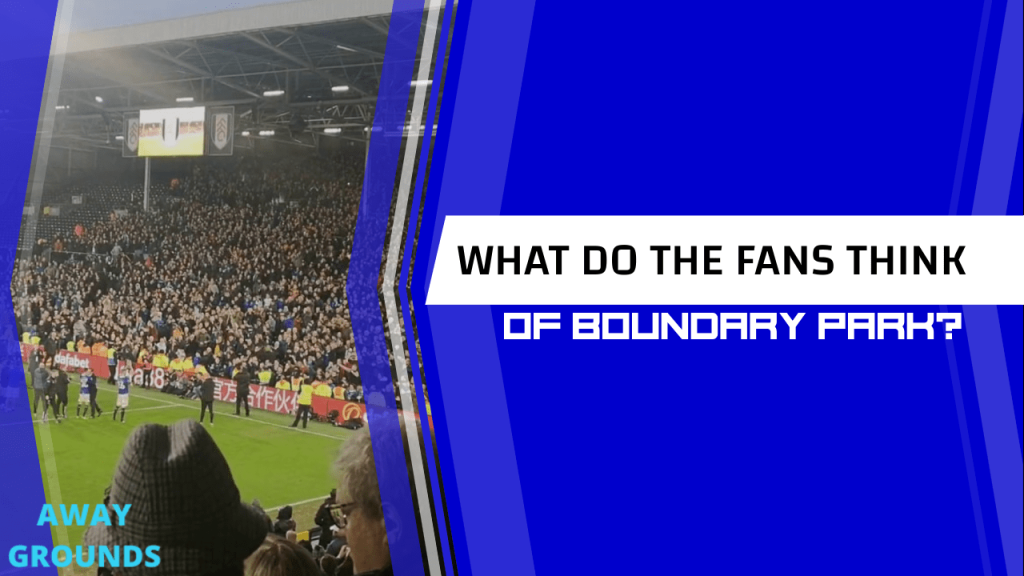 An almost universal complaint from visitors to Boundary Park is that it is always cold, with a biting wind. Boundary Park is anecdotally known as being the coldest ground in the Football League which earns it the nickname “Ice Station Zebra.” Visitors have also complained of lengthy delays in exiting the club car park.

Which is the away end at Boundary Park?

Away fans at Boundary Park can be found at one end of the ground, in front of Clayton Playing Fields, in the Chadderton Road End (behind the goal).

What is Boundary Park away end capacity?

The capacity of the away end at Boundary Park is about 3,750.