The Sixfields Stadium is all seater, with a capacity of 7,653. Northampton Town moved to the new stadium, on the outskirts of the town, at the end of 1994. The West side of the ground is dominated by the large, covered, single tier West Stand, which has seating for nearly 4,000, as well as housing the club offices and changing rooms.

The other three sides have smaller, covered, single tier stands. The Alwyn Hargrave (East) Stand is used as the Family Enclosure and is named after an ex-councillor who aided in the building of the new stadium. The club has received awards for the facilities provided for disabled supporters. The ends of the ground are identical. The Dave Bowen (North) Stand is named after the former player and manger who guided Northampton from the Fourth Divison to the First Division in the 1960s. Behind the South goal, the Paul Cox Panel & Paint (South) Stand houses the away supporters.

How to get to Sixfields

For satnav purposes, the postcode of the Sixfields Stadium is NN5 5QA. Drivers arriving from the South should exit the M1 at junction 15A and follow the A43 towards Northampton. The ground is on the right hand side of the road. Visiting fans driving from the North should leave the M1 at junction 16, following the A45 towards Northampton. Again, the ground is on the right. It is well signposted in the surrounding area.

Northampton train station is over 2 miles and a 25-30 minute walk from the ground from the ground, so a taxi or bus is advised. The D2 bus for Daventry stops near the station, over the railway bridge at the South end, and drops off about 200 yards from the ground. 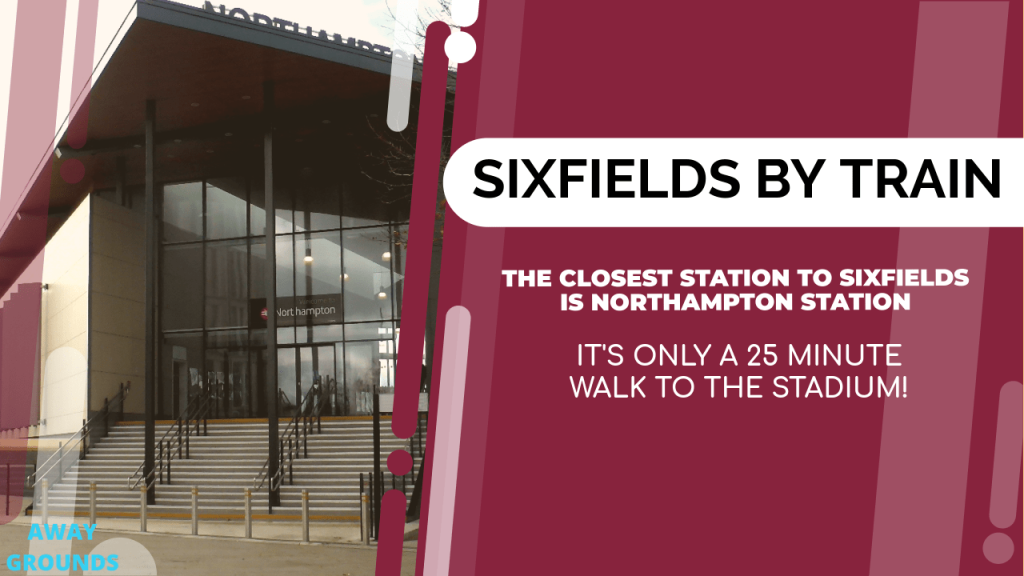 Return buses run from the same stop, but several fans have been caught out by the fact that this stop is used by buses running in both directions. The journey takes 10-20 minutes. Click here to check the current train timetables

The nearest airport is Luton, at a distance of 35 miles. There are regular rail links to Northampton, via St. Albans and Watford Junction. Click here to check the current flight times

There are several taxi companies in Northampton that can take you to and from Sixfields. You can always prebook a private hire taxi, or hail a black cab on any highway.

Calling all Northampton Taxi Companies – Why not advertise your company here?.

There are 2 fair sized car parks located at the ground. Visiting fans have advised early arrival, as the car parks fill quite quickly for more popular matches. Alternatively, there is a council owned car park behind the South Stand. 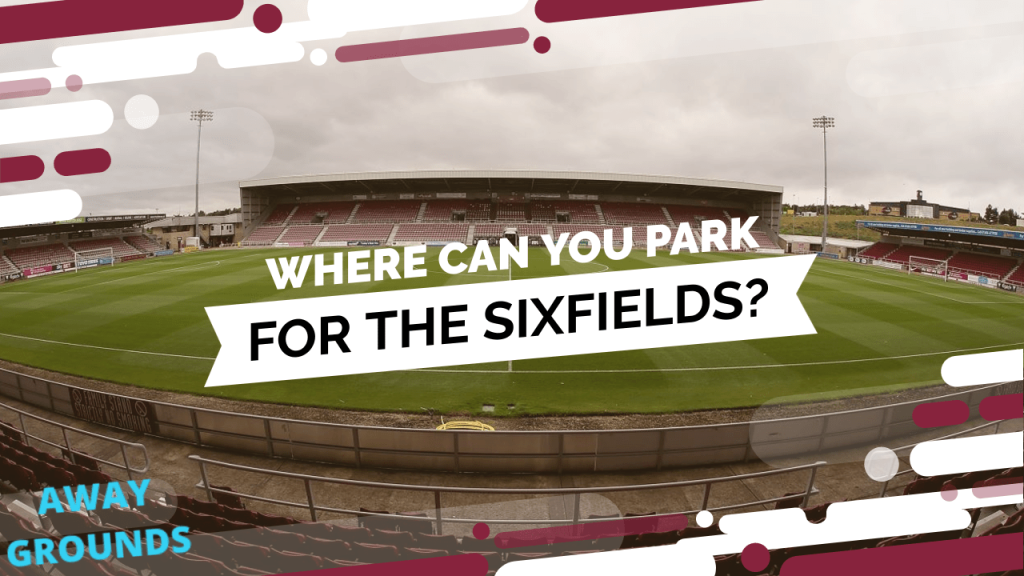 Parking is not allowed in the car parks of the nearby cinema and restaurants and several away fans report having their vehicles clamped.

Away Friendly Pubs near Sixfields

Drivers arriving via the A45 will pass the Turnpike pub, which is reported to offer a friendly welcome to away fans. Otherwise, there are a number of bars in the leisure complex near the ground. 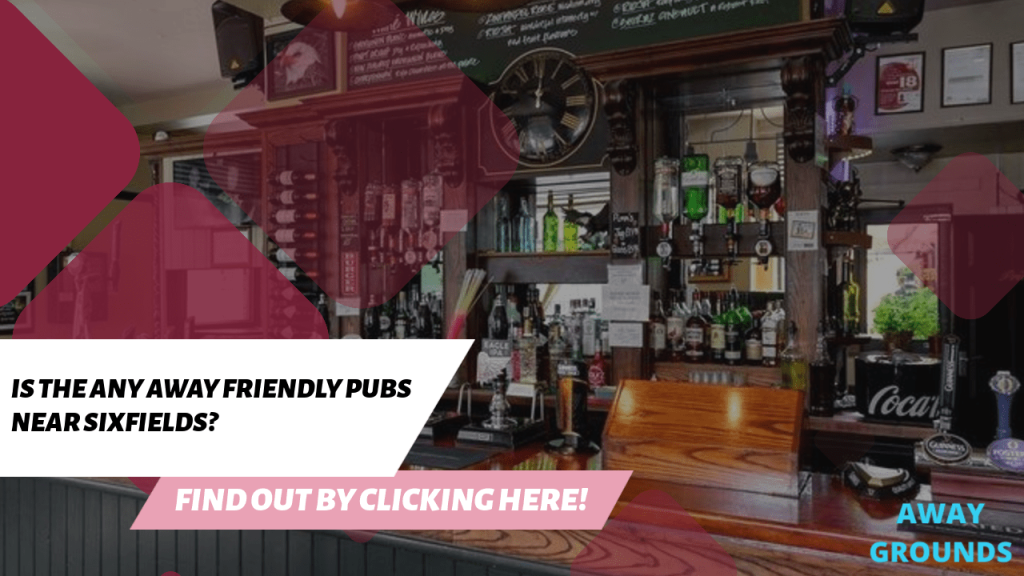 The Magic Tower is “home supporters only” and the Sixfields Tavern does not allow away colours. However, the Old Orleans bar and restaurant and the Sports Bar have received several recommendations, offering an amiable mix of home and away fans.

The Park Inn Northampton (pictured left), Silver Street, Northampton NN1 2TA is located in the town centre, near the historical market place, shops, cinema and casino. Fully refurbished in 2009, it is easily accessible from the M1, only a 5-minute walk from the train station and within 1½ miles of the Sixfields Stadium. Guest reviews have reported it excellent value for money.

The Northampton Marriott Hotel (pictured right), Eagle Drive, Northampton, NN4 7HW is just off junction 15 of the M1 and close to the A45. Following refurbishment, it offers a range of modern facilities and has received impressive reviews from visitors.

A consistent complaint about Sixfields is that fans need to queue twice, first to buy a ticket then again at the turnstiles to get into the ground. Some late arrivals have been caught out by this and have missed the start of the game. Fans of club with a large away following are advised to purchase their tickets in advance, as several visiting fans have arrived to find the away section sold out. 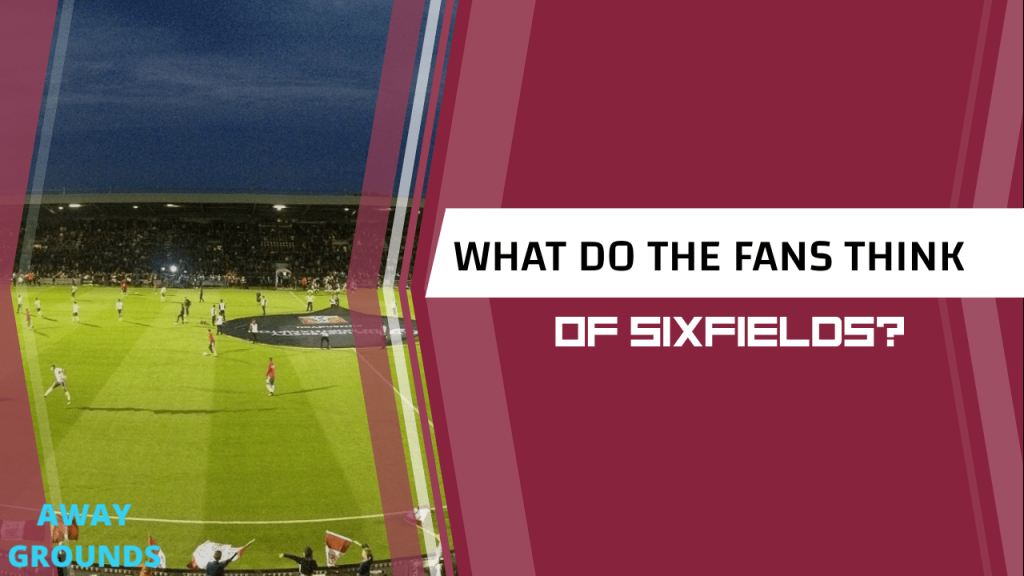 Away fans report that the home supporters are passionate about their team and their vocal support makes for a very good atmosphere within the ground, though many have remarked on the poor acoustics. The stewards and other club officials have been the subject of a number of complimentary reports. Toilet facilities have generally been reported as adequate. However, catering appears to leave something to be desired, with several visitors complaining about the poor quality of the food on offer.

Which is the away end at Sixfields?

At Sixfields Stadium, away fans are housed in the Imperial Cars South Stand.

What is Sixfields away end capacity?

The away end at Sixfields Stadium can hold up to 900 fans.