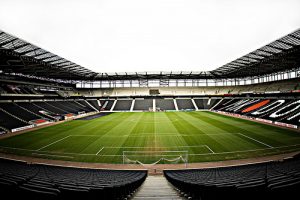 In 2007, MK Dons moved to a new, purpose-built, all-seater stadium in the Denbigh district, on the outskirts of Milton Keynes. It was designed by Populous (formerly HOK Sport), the same architects responsible for the Emirates & Wembley stadiums and cost in excess of £50 million to build. The stadium is totally enclosed and has a bowl-like design.

Externally, it is a modern design, with good use of silver-coloured cladding and a large amount of glass. Three sides have a large lower tier with a smaller overhanging upper tier. On the West side the upper tier houses the Directors’ box and corporate hospitality areas. Phase one of the stadium uses only the lower tier, giving a capacity of 22,000.

However, installation of seating in the upper tier will increase the capacity to 32,000. Also planned is an hotel and indoor basketball arena at the South end of the ground.

Which is the away end at Stadium MK?

Away fans at Stadium MK are usually seen in the stadium’s upper deck, in the North East Corner.

What is Stadium MK away end capacity?

Around 3,000 away fans can be seated in Stadium MK.