Sincil Bank has been the home of Lincoln City FC 1894.

The ground was extensively renovated in the 1990s, giving it an all-seater capacity of 10,127.

On one side is the large Lincolnshire Co-Operative Community Stand. This large, single-tiered covered stand opened in 1995 and is shared between home and away fans.

The Lincolnshire Echo Stand, opposite, runs only half the length of the pitch, straddling the halfway line. The IMPS Stand, at one end, has supporting pillars at the front and a row of executive boxes across the back.

The other end is the Stacey West Stand, which replaced the Railway Terrace in 1990 and is named in memory of two Lincoln supporters who lost their lives at Valley Parade in 1985.

How to Get to Sincil Bank

For drivers arriving from the North, the A1(M) is recommended. Exit the A1(M) following signs for Lincoln A57 / East Markham. Follow the A57 for about 10 miles and turn right at the junction to stay on the A57. After a further 6 miles, turn right at the roundabout onto the A46. Keep straight on over one roundabout and at the next turn left into Doddington Road (signed Lincoln City FC Stadium). At the T-junction after 2 miles, turn left into Newark Road (A1434). Take the 1st exit at the roundabout into High Street. After about ½ mile, take the outside lane, and go straight on at the lights. After 200 yards, turn right into Scorer Street. Sincil Bank is the first right, with the ground on the right.

Lincoln Central train station is about a 15-minute walk from the ground. On exiting the station, turn left and proceed as far as the traffic lights near St. Mary’s church. Turn left at the lights, into High Street, crossing the railway line at the level crossing. After about a 10-minute walk along High Street, turn left into Scorer Street. This road lead to the bridge over the unfortunately-named Sincil Drain River. Cross the bridge and turn immediately right onto Sincil Bank, where the ground is straight ahead. 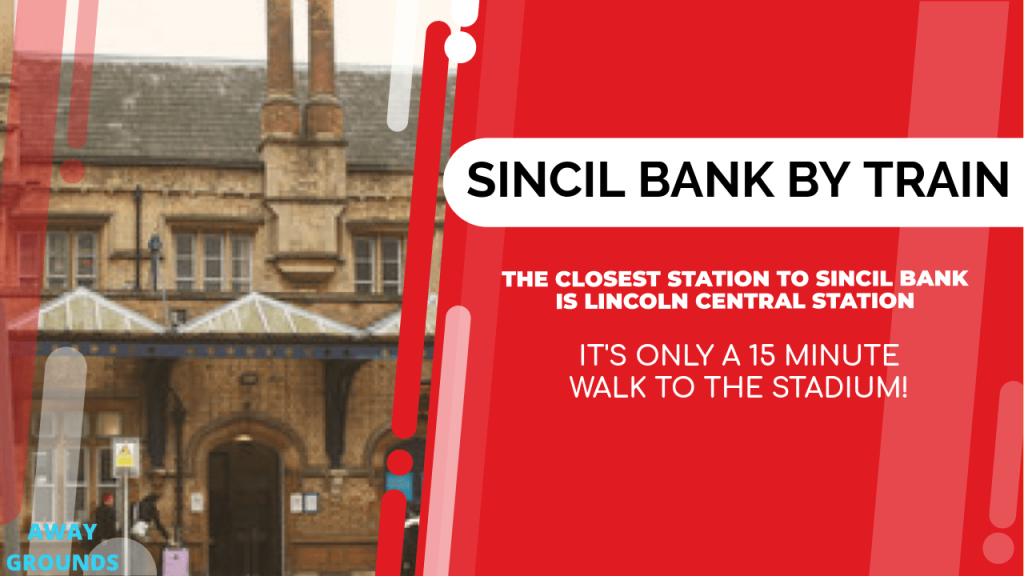 There are several good pubs along High Street (see below), but for those not wishing to drink en route to the ground, there is an alternative, shorter route. Turn right out of the station and cross the railway bridge on the right. Then just follow the road to the ground. Click here to check the current train timetables

The nearest airport is Humberside, at a distance of 26 miles. Barnetby railway station is about 3 miles from the airport and offers direct rail connections to Lincoln, with a journey time of about 35 minutes. Click here to check the current flight times

There are several taxi companies in Lincoln that can take you to and from Sincil Bank. You can always prebook a private hire taxi, or hail a black cab on any highway.

Calling all Lincoln Taxi Companies – Why not advertise your company here?.

Visiting fans advise that early arrivals can take advantage of reasonably priced parking behind the Stacey West Stand. Following the signs for “Away Coaches” leads to the A158 South Park Avenue, which offers plenty of street parking. 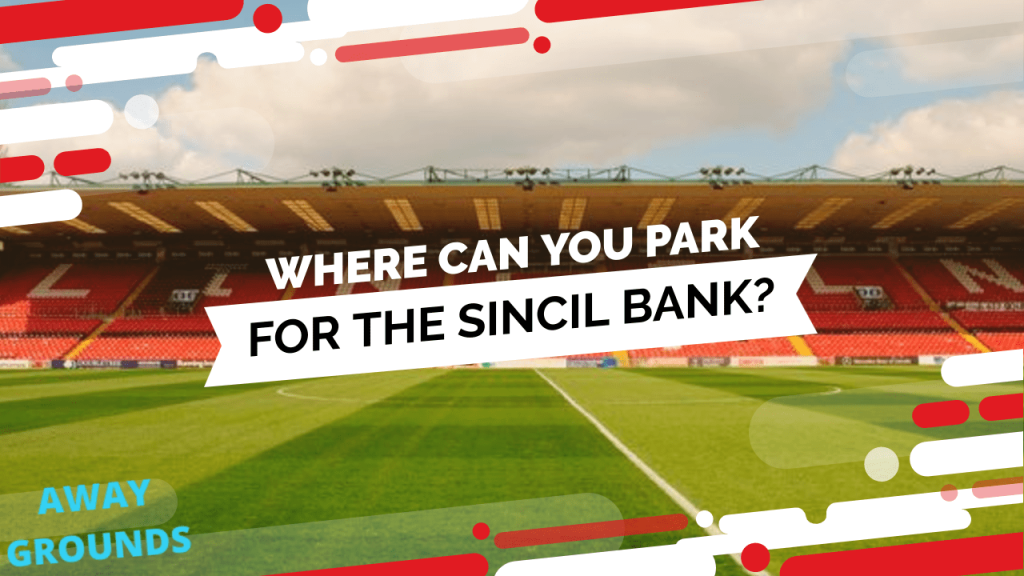 The South Common, at the beginning of South Park Avenue, offers free parking on match days and is only a 5-minute walk from the ground.

Exactly 10 years after the club’s founding, in 1894, Sincil Bank was constructed, and it opened the following year. Lincoln City played its games at John O’Gaunts at this time, a venue with simply a players’ changing room and no amenities for spectators. However, on October 1, 1892, the team defeated Sheffield United in front of 2000 spectators in their inaugural Football League match.

Due to the club’s ambition to continue expanding, it was decided to relocate to Sincil Bank, which is located about 300 metres to the southeast of John O’Gaunts. It hasn’t just housed Lincoln City games over the years; to Imp fans, it’s simply known as The Bank. Scotland’s U16 team took on the England U16 team in 2008 as part of the

Away Friendly Pubs Near Sincil Bank

The “Centre Spot” Supporters’ Club, behind the South Park Stand, admits away fans. The beer and hot pork rolls are reported excellent. Otherwise, there are numerous good pubs along High Street. 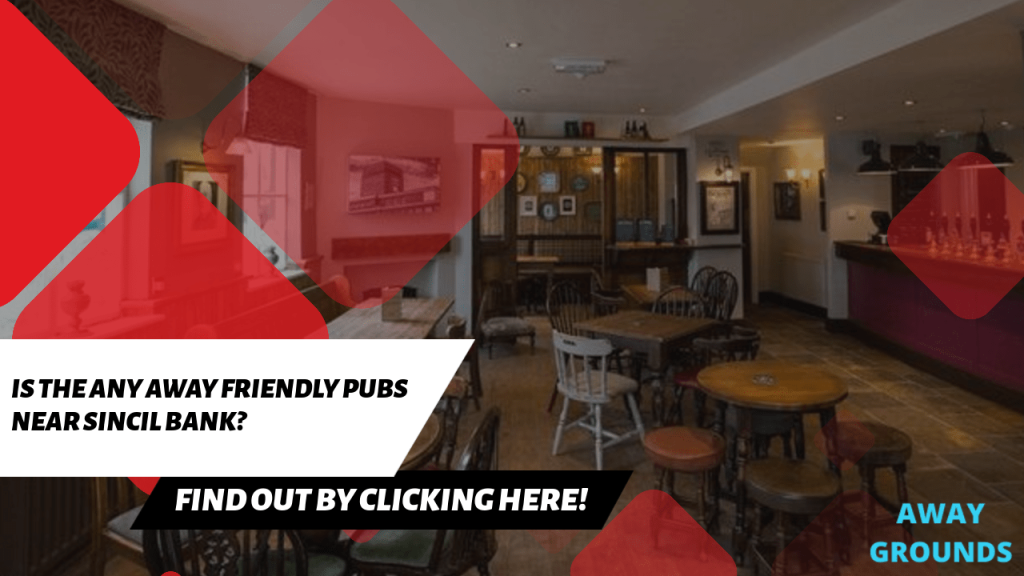 Those particularly recommended include the CAMRA-listed Golden Eagle, the Ritz, which serves reasonably priced food, and the nearby Anchor.

The Ibis Hotel Lincoln, Runcorn Road, Lincoln LN6 3DZ is just off the A46, south of the city of Lincoln, with good access to the area’s major roads. If offers comfortable rooms at great-value rates. Guest reviews highlight its location, helpful staff and excellent value for money.

Most visiting fans report having an enjoyable day at Sincil Bank, with the home supporters noted as particularly friendly. The atmosphere within the ground is excellent, aided by the chants of the passionate Lincoln fans, often aided by the LCFC band. 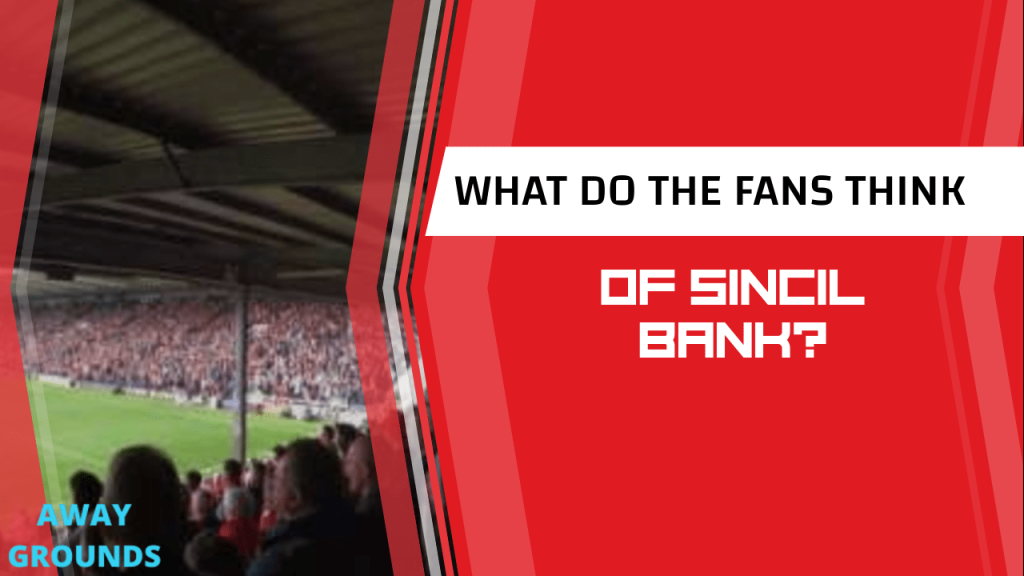 The facilities and view of play in the Lincolnshire Co-Operative Community Stand are pretty good and there is a good range of quality food available, including pies, burgers and Lincolnshire sausage rolls.

Which is the away end at Sincil Bank?

What is Sincil Bank away end capacity?

The capacity of the away stand at Sincil Bank is around 1,944.