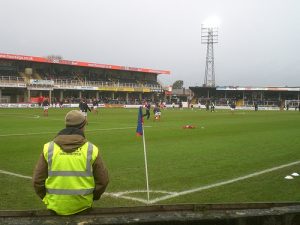 The Edgar Street ground has a capacity of 8,843, with seating for 1,761. At the East side of the ground, the Merton Stand, constructed in 1968, is the only all-seater stand. Originally flanked by standing areas on either side, the stand was extended to fill the entire length of the pitch. Opposite is the narrow, two-tiered Cargill Stand which was built in 1974.

This has terracing on the lower tier and 5 rows of seats on the upper tier. The Meadow End is a fully covered terrace behind the North goal. The Blackfriars Street End is similar but is positioned further away from the pitch. Half of the end is designated for away supporters who are separated from the home support by fencing, which is known as “the cage.”

How to get to Edgar Street

For satnav purposes, the postcode of the ground is HR4 9JU.

Drivers arriving from the North should exit the M5 at junction 8, following the M50 towards South Wales. Exit the M50 at junction 2, taking the A417 towards Ledbury and picking up the A438 to Hereford. At the large roundabout, turn right into Edgar Street and right again into Blackfriars Street. The ground is on the left.

From the South, exit the M4 at junction 15, following the A417 towards Gloucester. Take the A49 to Ross-on-Wye and Hereford. At the roundabout, take the Grayfriars Bridge / Victoria Street road. At Steels Garage, keep left into Edgar Street. Turn right into Blackfriars Street, where the ground is on the left.

Hereford station is a less than 10-minute walk from the ground. On exiting the station, turn left towards the Safeway supermarket. Cut through the car park and follow the pedestrian walkway at its left out onto Commercial Road. At the traffic lights, turn right into Blueschool Street as far as a set of lights with a multi-storey car park opposite. Cross the road, bearing slightly right onto the path between the car park and council offices. Turn left and the ground is on the right. Click here to check the current train timetables

The nearest airport is Bristol, some 47 miles away. Click here to check the current flight times

There are several taxi companies in Hereford that can take you to and from Edgar Street. You can always prebook a private hire taxi, or hail a black cab on any highway.

Calling all Hereford Taxi Companies – Why not advertise your company here?.

The club has a large, reasonably-priced “Pay and Display” car park at the ground.

Away Friendly Pubs near Edgar Street

The stadium’s central location means that it is within easy walking distance of numerous “away friendly” pubs in the city centre. Closer to the ground, the Old Market Inn (formerly the Newmarket Tavern) on Blueschool Street has received mostly favourable reports.

The Oxford Arms, accessible from the club’s car park has also been recommended. It offers a beer garden and large screen Sky Sports. The “Legends” bar at the ground is also open before and after matches.

The Green Dragon, Broad Street, Hereford HR4 9BG is an historic coaching inn dating back to the 16th century. It is one of Hereford’s most popular hotels, offering a warm welcome and informal atmosphere, within a few hundred yards of the Edgar Street ground.

The Somerville House, Bodenham Road, Hereford HR1 2TS is also within easy walking distance of the ground and this Victorian villa offers boutique style bed and breakfast accommodation with a blend of luxury and comfort.

What have other Away Fans said about their trip to Edgar Street?

The majority of fans have reported their trip to Edgar Street to be a happy, relaxed occasion, with good humoured banter from the home fans. However, several visitors have reported experiencing trouble around the ground so the appropriate caution is advised.

Facilities within the ground are basic, but there are a good range of refreshments available, including cheeseburgers, hot dogs and various pies and pasties