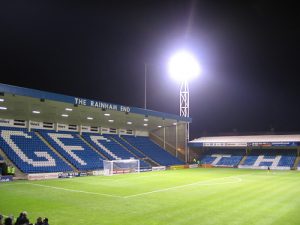 The stadium was extensively redeveloped in the 1990s, reducing its capacity to the current all-seated 11,582. The Medway Stand, on the North side of the pitch, was opened in 2000, replacing the old Main Stand. This large, two-tiered structure houses the changing rooms, club offices and club shop.

Opposite is the Gordon Road Stand, opened in 1997. Due to planning requirements, the stand had a height restriction placed upon it, making it significantly lower than the other three sides of the ground. The Rainham End Stand, behind the goal at the eastern end of the pitch, replaced a terrace in 1999.

Opposite is the temporary Brian Moore Stand, on the site of the former Town End terrace, which houses visiting supporters. Despite significant investment in the current ground, the club are debating a move to a new stadium.

How to get to the Priestfield Stadium

The Priestfield Stadium is located in Redfern Avenue, Gillingham, Kent ME7 4DD.

Drivers coming from the North should exit the A2 at junction 1, joining the A289. After about 3 miles, take the 2nd exit at the roundabout, following signs for the Medway Tunnel. Take the 1st exit at the next 2 roundabouts and enter the tunnel. Follow the A289 through 2 sets of lights and take the 3rd exit at the roundabout, onto Church Street. Drive up the hill, over the level crossing an take the 2nd left into Linden Drive. At its end, turn right into Redfern Avenue, where the ground is on the right.

From the South, leave the M2 at junction 4 onto the A278. Continue over 2 roundabouts and take the 1st exit at the 3rd roundabout onto the A2. Take the 3rd exit at the next roundabout, joining the A289. At the next roundabout, take the 1st exit onto Cornwallis Avenue and follow it through 1 set of lights before turning right into Toronto Road. Take the 2nd left off Toronto into Redfern Avenue, where the ground is on the left.

Gillingham railway station is about a 10-minute walk from the ground. 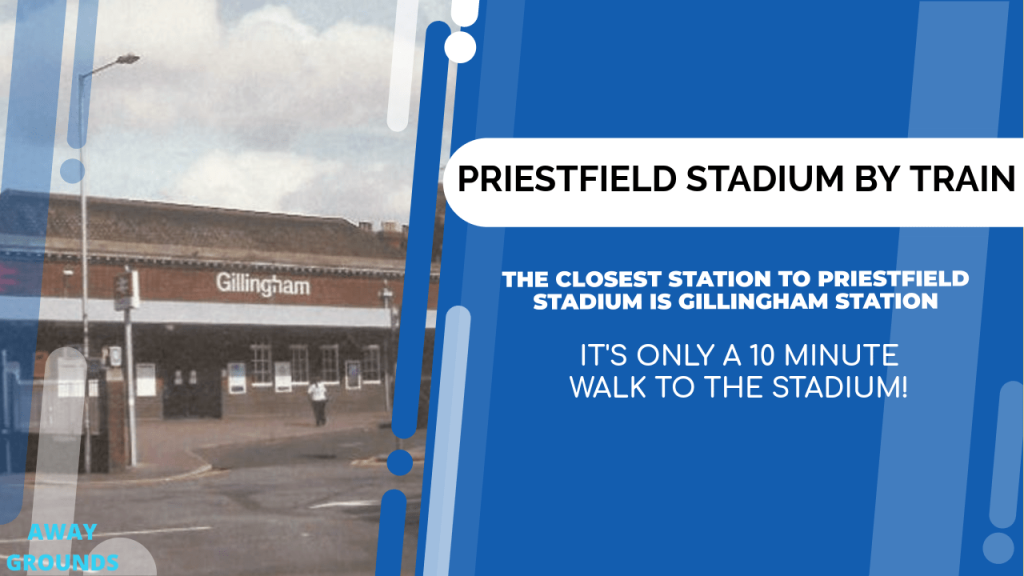 It is served by trains from London Victoria and Caring Cross. On exiting the station, turn left and proceed as far as the crossroads. Go straight on into Priestfield Road, where the away turnstiles are at the far end. Click here to check the current train timetables

The most convenient airport for the Priestfield Stadium is Gatwick. Non-stop “Gatwick Express” trains run to London Victoria every 15 minutes with a journey time of 30 minutes. There are regular, direct trains from Victoria to Gillingham, taking about an hour. Click here to check the current flight times

There are several taxi companies in Gillingham that can take you to and from the Priestfield stadium. You can always prebook a private hire taxi, or hail a black cab on any highway.

Calling all Gillingham Taxi Companies – Why not advertise your company here?. 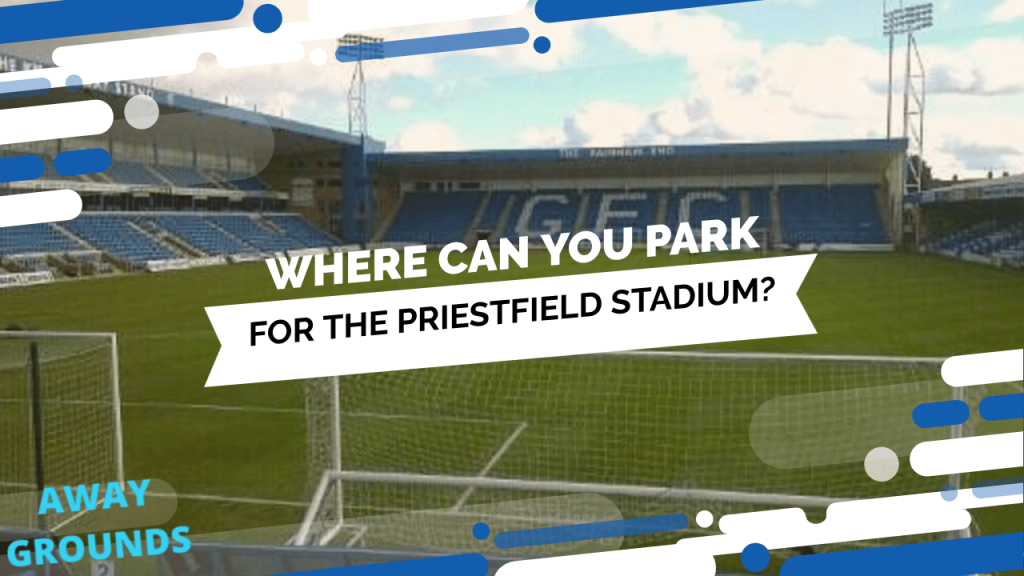 A “residents only” parking scheme operates around the ground, so those relying on street parking may be face with a lengthy walk to and from the ground.

Away Friendly Pubs near the Priestfield Stadium

The nearest “away friendly” pub is the Livingstone Arms, on Gillingham Road, about 100 yards from the visitors’ turnstiles. It offers a warm friendly atmosphere, with complimentary bar snacks. However, it does get very busy on match days. The town centre is a comfortable walk from the ground and has several recommended pubs. The CAMRA-listed Will Adams, on Saxton Street, offers an affable intermingling of home and away fans and serves good quality, cheap food. 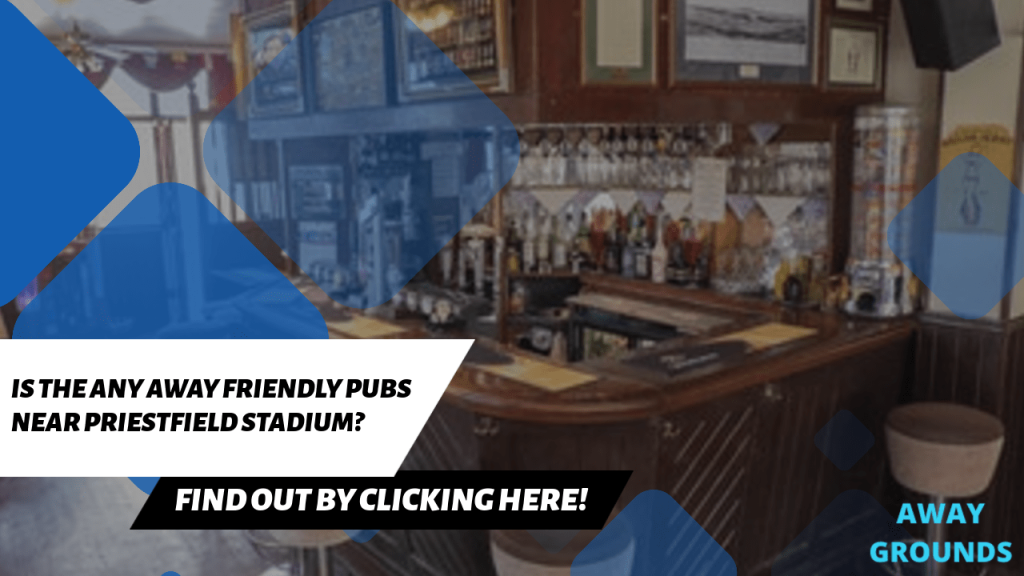 The Southern Belle, on High Street, opposite the railway station, has also received good reports. Away fans should avoid the Cricketers in Sturdee Avenue.

Hotels near the Priestfield Stadium

The Ramada Encore Chatham, Western Avenue, Chatham, ME4 4NT is ideally located at the Chatham Maritime Dockyard and is easily accessible from the M25 and M2 motorways, within 1½ miles of the Priestfield Stadium. All rooms benefit from a modern design and an en suite bathroom with power shower.

The temporary Brian Moore Stand has received mixed reactions from visiting fans, dependent on the weather. This open stand has no windshields and though the club hands out free rain ponchos, many fans report getting soaked. Furthermore its open nature makes it difficult for away fans to generate much atmosphere. However, it is of good size and height, offering excellent views of the playing action. 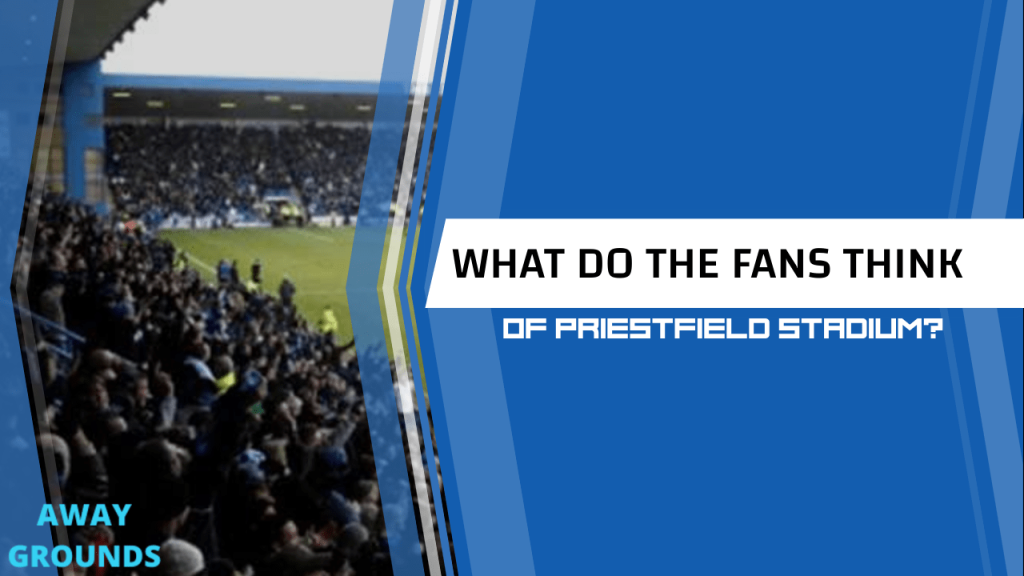 The facilities are surprisingly good with fans raving about spacious toilets and excellent refreshments, including “the best cheeseburgers in the league.”

Originally, the ground consisted of a pavillion, a modest seating stand, and earth bank terracing. However, by 1908, the stadium had grown greatly, with more seating and excellent terracing. Priestfield Road was the name of the stadium when it was opened.

In 1948, when Priestfield Stadium hosted an FA Cup match against Queens Park Rangers, the stadium had its highest attendance of 23,002.

The stadium underwent little changes between 1923 and 1997, with the exception of some enhanced terracing and added cover in the 1950s. Capacity was roughly 22,000, however due to safety measures, it was reduced in the 1980s.

Priestfield Stadium’s condition had deteriorated dramatically by the 1990s, prompting the club to embark on a phased restoration initiative. The Gordon Road Stand was the first new stand completed in 1997, while the Rainham End was built in 1999.

The old main stand was removed at the same time, and the completely new Medway Stand opened a year later. In 2003, the remaining terrace was destroyed and the Brian Moore Stand was built in its place. The plan was to create a suitable stand at the end, but this never materialised.

Getting tickets for Gillingham

Tickets for Gillingham matches can be purchased online, over the phone at +44 (0) 1634 300000, or at the Priestfield Stadium ticket office.

Tickets can also be purchased prior to the match at the ticket office. A regular league match at Gillingham is rarely sold out.

Which is the away end at Priestfield Stadium?

Away fans are housed in one half of the Brian Moore Stand at Priestfield Stadium.

What is Priestfield Stadium away end capacity?

The away end capacity at Priestfield Stadium is around 1,500.