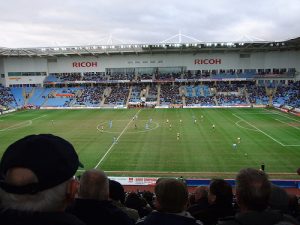 The Ricoh Arena is an all-seater stadium, with a capacity of 32,500.

Built by Laing O’Rourke (also responsible for Cardiff’s Millennium Stadium), it was opened in August 2005, replacing Coventry’s previous home at Highfield Road, where they had played since 1899. Due to a dispute with the Stadium’s owners over extortionate levels of rent, Coventry City agreed to play their home games at Northampton’s Sixfields stadium for 3 years from the 2013/14 season onwards, whilst a new stadium was built in Coventry.

The new stadium is completely enclosed, with single tier stands to the North, South and East of the ground. The West Stand has a small tier of seats overhanging the larger lower tier which houses hospitality boxes towards its rear. Numerous perspex panels allow natural light to enter, aiding the growth of the pitch. A large, video scoreboard occupies one corner of the stadium between the South and East Stands. Away supporters are accommodated to one side of the South Stand towards the corner with the West Stand.

How to get to the Ricoh Arena

Coventry station is 3½ miles from the Ricoh Arena and too far to walk for most. However, there is a bus stop directly outside the station, from which most buses go to the Pool Meadow bus station. “Match Day Special” tickets are available, covering all journeys within the Coventry area. 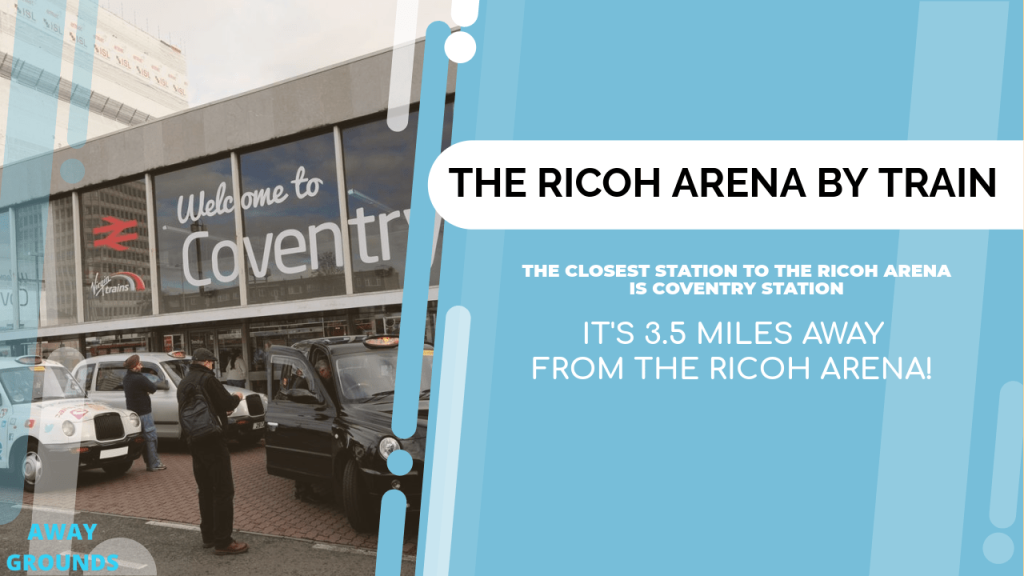 A shuttle bus (service no. 101) operates from the Pool Meadow bus station to the Arena stadium complex, with departures every 10 minutes for 2 hours prior to kick-off. Return buses run from outside the South Stand for an hour after the match. Several fans have advised avoiding the lengthy queues for the return buses by catching the no.13 service from near the roundabout close to the stadium. Click here to check the current train timetables

The nearest airport is Birmingham International, some 11 miles from the ground. Regular rail connections are available to Coventry, with a journey time of 20-30 minutes. Click here to check the current flight times

There are several taxi companies in Coventry that can take you to and from the Ricoh Arena. You can always prebook a private hire taxi, or hail a black cab on any highway.

Calling all Coventry Taxi Companies – Why not advertise your company here?.

Parking is not available at the stadium and a residents’ only parking scheme operates in the vicinity of the ground. However, the club utilise a number of official car parks in nearby factory units and schools, within easy walking distance of the ground. 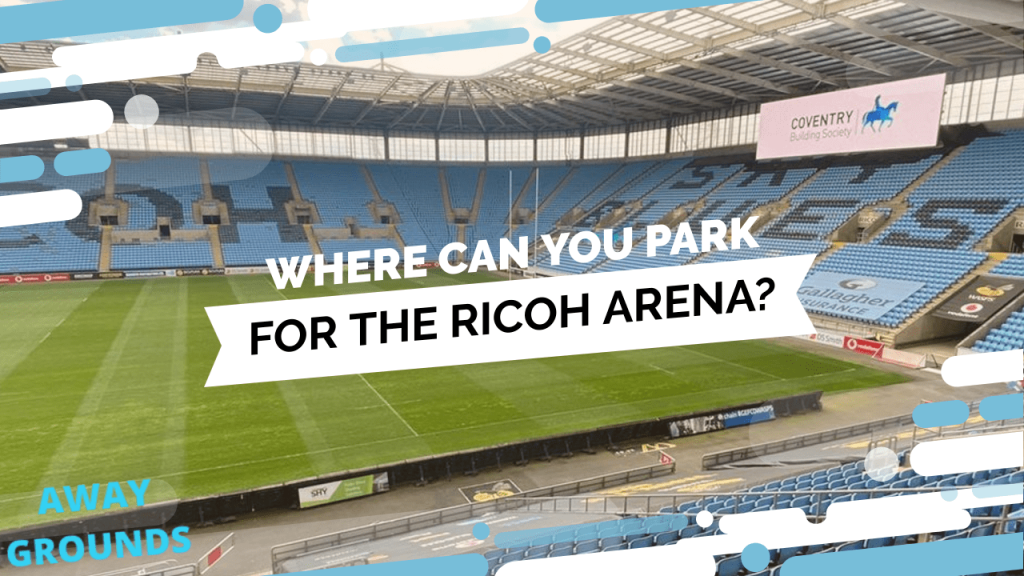 Alternatively, there are secure car parks near junction 3 of the M6, within a 15-minute walk of the ground. These provide easy access to the motorway after the match. However, they are popular and fans are advised to book spaces in advance.

Away Friendly Pubs near the Ricoh Arena

The Black Horse, situated between Longford and Exhall, is reported to offer a friendly welcome to away fans. Many of the pubs along Longford Road are “home only,” but the JK English Pub is an exception, providing a hearty welcome for visiting supporters. 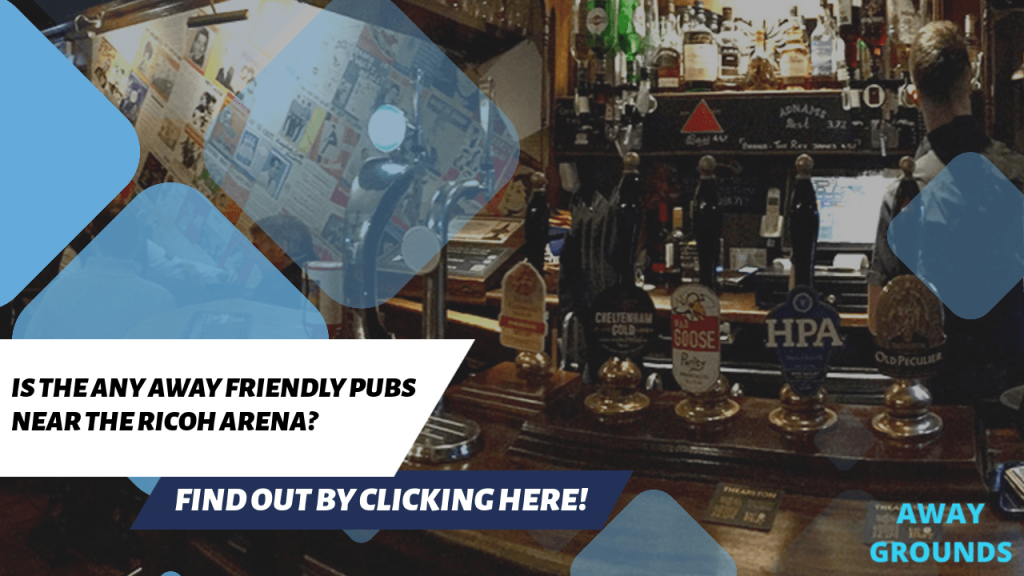 It can be reached by following the towpath away from the North Stand, over the canal for some 400 yards and turning right into Longford Road. The pub is some 200 yards, on the right. It offers an “all you can eat” buffet on Saturday lunchtimes. Reasonably priced parking is also available at this pub. Alternatively, alcohol is available inside the stadium.

Hotels near the Ricoh Arena

The Britannia Coventry Hotel, Fairfax Street, Coventry CV1 5RP is a centrally-located, budget price hotel. Guest reviews have been less than sparkling, but suggest that it is more than adequate for a one night stay.

The Quality Hotel Birmingham NEC, Birmingham Road, Coventry CV5 9BA is also towards the lower end of the price scale, but guest reviews have been more encouraging, remarking upon its good location, helpful staff and cleanliness.

What have other Away Fans said about their trip to the Ricoh Arena?

Many fans have remarked on the steep nature of the South Stand, requiring a good deal of effort to reach their seats. Numerous visitors have reported being disappointed at the view of the playing action, as a running track surrounds the pitch and is itself some distance from the playing surface. Several fans have reported that despite excellent legroom, the seating was quite uncomfortable, which proved very disappointing in a relatively new stadium. 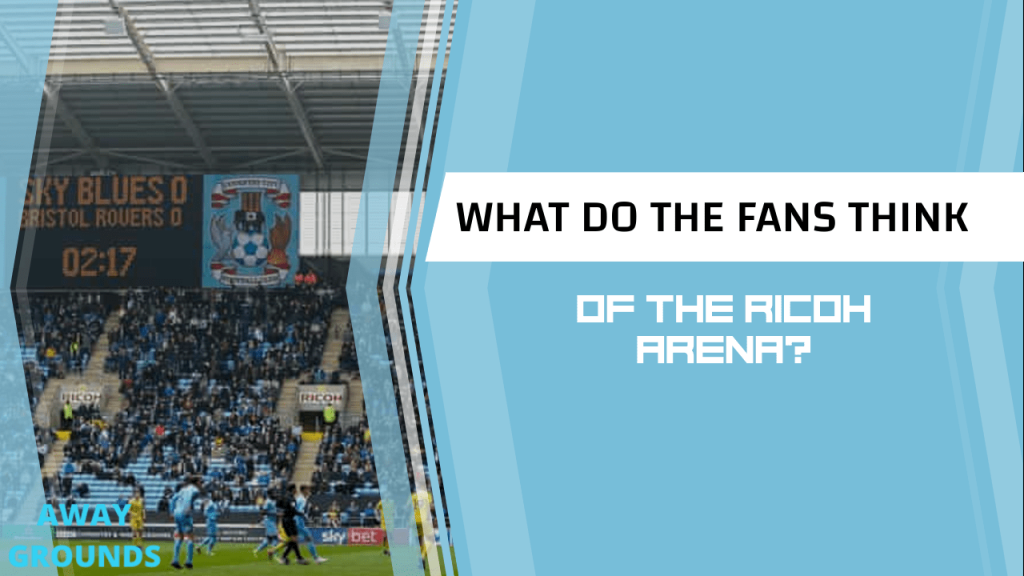 However, acoustics are reported as superb, creating a great atmosphere within the ground. Facilities are reported as modern, with helpful staff. Queues at catering outlets appear to be far shorter than at some other grounds, and the range and quality of products offered are generally reported as excellent, though several fans have complained of warm lager at £3+ per bottle. Stewards are reported as being a little overzealous, with fans regularly ejected for persistent standing, so best behaviour is advised

Coventry Building Society Arena, which was known as Ricoh Arena until 2021, became the home of Coventry City in 2005, after the club had previously played at Highfield Road for 106 years.

Plans for the move were revealed in 1997, but due to a series of delays, the stadium opened four years later than expected. As a result, the original capacity of 45,000 people was reduced to little over 30,000.

On August 20, 2005, the Ricoh Arena hosted its debut match, a league match between Coventry and QPR. Six months later, in February 2006, the stadium was formally opened.

The Ricoh Arena was one of the six Olympic venues in 2012, holding a handful of first-round group games.

Coventry City has had a tense relationship with the Coventry Building Society Arena, which is not owned by the club, over the years, centred on rent payments. Due to the issue, Coventry had to play their home games in Northampton’s Sixfields Stadium, which is over 25 miles away from Coventry, for the 2013-14 season, although they returned the next season.

The London Wasps rugby team purchased the ground in 2014 and relocated to Coventry from their previous home in High Wycombe. Coventry City had to leave again in 2019 due to a rent dispute. The club reached an arrangement with the Wasps and returned to the Coventry Building Society Arena in 20221 after two seasons at Birmingham City’s St. Andrew’s Stadium.

On the day of the match, tickets can be purchased at the gate (cash only) or at the ticket office (cashless). Coventry rarely sells out their games.

Brilliant seats, very clean inside and out, staff was brilliant, made me feel very safe & welcome, would go there again, amenities around are excellent one of the best stadiums I have been to.

A world-class destination for business, entertainment and sport. Gigantic architect with lots of sports and entertainment facilities. The view of the Ricoh Arena attracts you from all over the surrounding area.

What is the Ricoh Arena now called?

Who owns the Ricoh Arena in Coventry?

The owners of Ricoh Arena are Wasps RFC and Wasps Holding Limited.

Is the Ricoh Arena covered?

At Ricoh Arena, the stands are covered but the pitch is open. The closer you are to the pitch, the more likely you are to get caught by the rain.

What is The Ricoh Arena away end capacity?

The away end capacity at The Ricoh Arena is around 3,000.

Which is the away end at The Ricoh Arena? 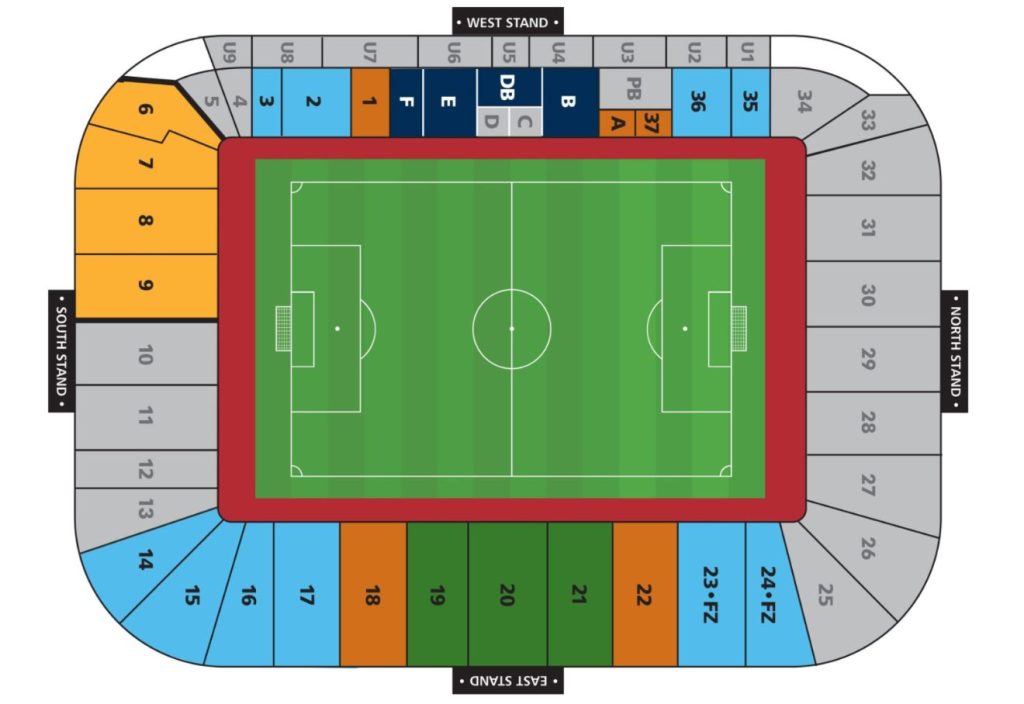 The Coventry Building Society Arena has established itself as a premier worldwide facility for a wide range of events, attracting over 1.5 million visitors each year.

Wasps Rugby Men, Wasps Netball, the Wasps Community Foundation, and Coventry City Football Club all call this place home. The Coventry Building Society Arena has hosted many of the world’s biggest acts, including SpiceGirls, the Rolling Stones, Bruce Springsteen, and Take That.

Their business relies heavily on exhibitions, conferences, and meetings. Their one-of-a-kind facility can accommodate any event, from a small meeting to a large conference or expo. Many sold-out events have taken place in the vast open spaces surrounding the Arena.

Thank you for reading our Ricoh Arena guide. We hope your team wins!