The Weston Homes Community Stadium is all-seater, with a capacity of 10,000.

After 71 years, Colchester left their Layer Road ground and moved to a brand new stadium on the outskirts of town in July 2008.

The new ground has been named the “Weston Homes Community Stadium” in a 10-year sponsorship deal, worth up to £2 million. The £14 million build cost was mainly met by Colchester Borough Council, from whom the club lease the ground. The ground comprises four separate stands, all of which are single-tiered. The South Stand, which originally housed the away supporters, has a Police control box to one side. Since the 2009/10 season, the club have relocated away fans to the opposite (North) stand.

How to get to the Weston Homes Community Stadium

The stadium is located in United Way, Colchester CO4 5UP.

From the North, drivers should follow the A14 and M11, exiting at junction 8 (Stansted Airport / A120). Follow the A120 towards Colchester which eventually becomes the A12. Exit at junction 29, following signage for A12 London. Take the 1st left into Severalls Industrial Estate and go left again into the business park. At the next roundabout turn right into the Crescent and at the next one, turn right into Severalls Lane. At the next roundabout turn left into Axial Way and then straight onto into United Way for the stadium.

From the South, the M23 and M25 route is recommended. Exit the M25 at junction 28, following the A1023 towards Brentwood / Chelmsford / A12. At the Brook Street roundabout, take the 3rd exit towards Harwich / A120 / Chelmsford. Exit the A12 at junction 29, from whence directions are as above.

The nearest station to the ground is Colchester North, just under two miles away from the stadium. A free shuttle bus service operates from nearby Bruff Close. Turn left at the end of the station approach and follow the 2nd exit at the roundabout. Buses depart from the rear of the “Big Yellow” storage facility. 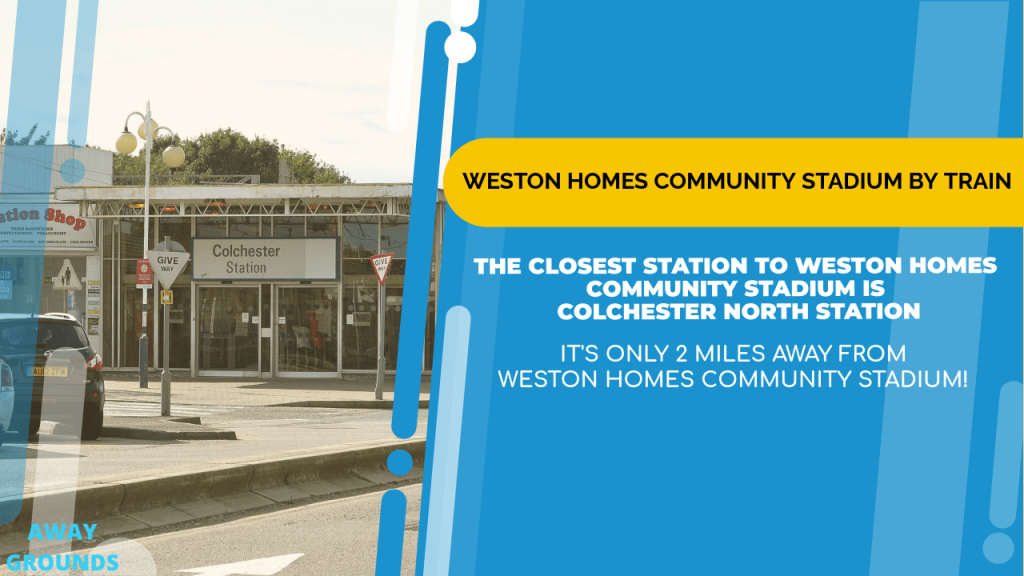 Buses run from about two hours either side of matches. Click here to check the current timetables

Stansted is the nearest airport, about 28 miles away. Regular trains run from the airport to Colchester, via London Liverpool Street. Total journey time is about 2 hours. Click here to check the current flight times

There are several taxi companies in Colchester that can take you to and from the Weston Homes Community Stadium. You can always prebook a private hire taxi, or hail a black cab on any highway.

Calling all Colchester Taxi Companies – Why not advertise your company here?.

The club car park has about 600 spaces, but reportedly fills very early. Fans also report that cars are held back to allow foot traffic to disperse after a match, leading to lengthy delays in getting away. 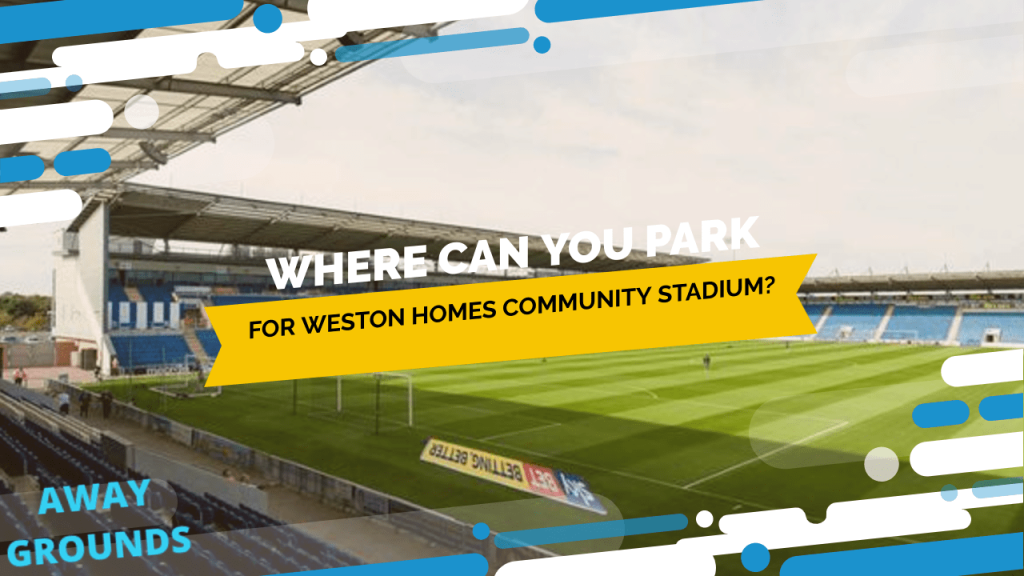 A residents-only parking scheme operates within a mile radius of the stadium. However, several local businesses offer reasonably-priced parking within a 10-minute walk of the stadium.

Away Friendly Pubs near the Weston Homes Community Stadium

The location of the stadium means that the choice of nearby pubs is very limited. Several fans have recommended pubs near Colchester North station. The Norfolk, on North Station Road, reportedly offers a good selection of beers and lagers, along with a friendly welcome for away fans. 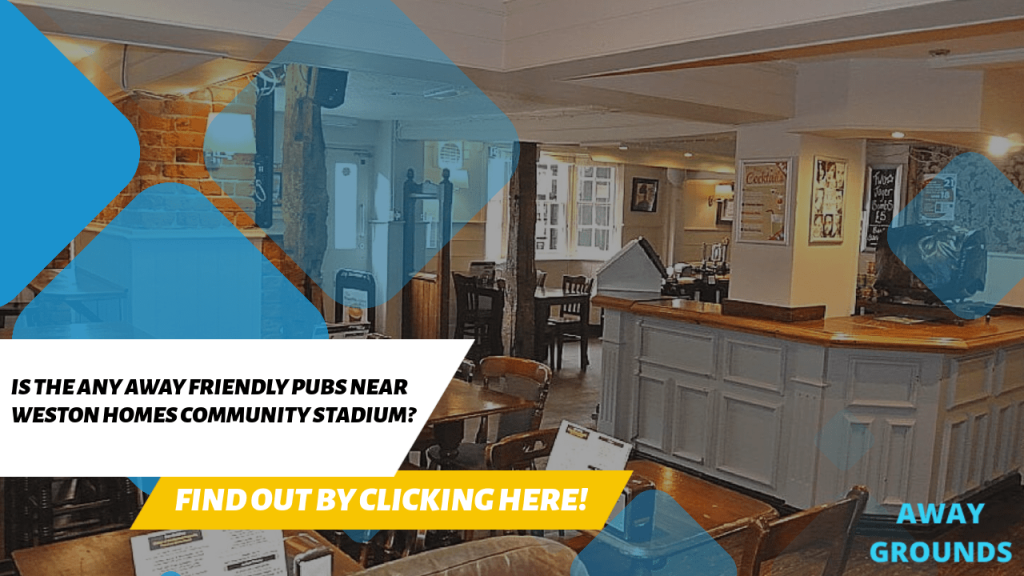 Other visitors have suggested taking the short train trip to Colchester, where there are several recommended pubs. The Odd Man Out, on Mersea Road serves a range of real ales, as does the Fox and Fiddle (about a 10-minute walk from Colchester station).
Alcohol is also available inside the stadium.

The Ramada Colchester, Colchester Old Ipswich Road, CO7 7QY is located within 2 miles of the ground and convenient for major road routes. All rooms have en suite facilities and interactive multi-channel TV and radio systems. Sky Sports is available in the bar and free, on-site parking is available.

The Holiday Inn Colchester, Abbotts Lane, Colchester CO6 3QL is situated on the outskirts of the town, about 3½ miles from the ground. Room amenities include air conditioning and Internet access, while the hotel’s health club features an indoor pool, gym steam room, and sauna.

What have other Away Fans said about their trip to the Weston Homes Community Stadium?

away fans colchesterSeveral visiting fans have questioned the siting of the new stadium, its location at the edge of a business park on the outskirts of town appearing unusual for a “community” club. The stadium is reported functioning and well-presented, though, in keeping with other new stadia, lacks “character.” 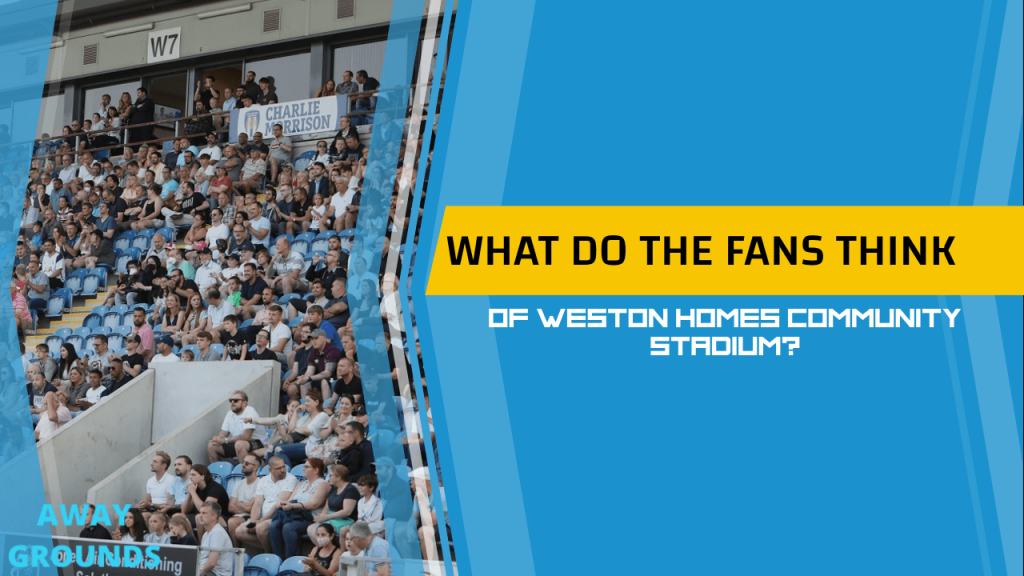 The view of the play is good, with the steep South Stand keeping away fans close to the action and seats have ample legroom. Catering is adequate with a varied range of pies, burgers etc. available on the concourses.

Which is the away end at Weston Homes Community Stadium?

The away fans visiting Weston Homes Community Stadium are housed in the North Stand, which is a single-tiered structure.