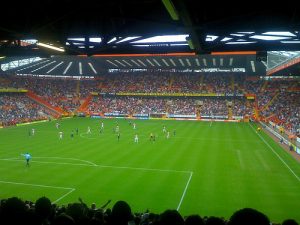 The Valley stadium is an all-seater venue, with a capacity of 27,111.

It underwent considerable redevelopment from 1992 onwards. The large, open terrace on the East side of the ground had not been used since the mid-1980s, following the Bradford City fire of May 1985. It was replaced by a single-tier stand, housing the TV gantry and executive boxes, the building of which was completed in 1994.

The North Stand was rebuilt during the 2001-02 season. The former single-tier stand was extended to a large two-tier structure, enclosing the North East and North West corners of the ground. The West Stand was built in 1998, after Charlton’s first promotion to the Premiership, and is also two-tiered. The South Stand dates from the early 1980s and is named after 1947 FA Cup-winning manager, Jimmy Seed. Away fans are housed in the South Stand. A large video screen occupies the corner between the South and East Stands, while a statue of goalkeeping legend Sam Bartram can be found outside the ground.

How to Get to the Valley

Drivers arriving from the North are advised to follow the M1 as far a junction 6a, exiting onto the M25 towards Dartford. Exit at junction 27, onto the M11 towards London (NE). Join the North Circular Road (A406), following it as far as the A12 exit towards Romford and Central London. Follow the A12 and A102, taking a slight right at Pear Tree Way. Take the 2nd exit at the roundabout, onto the A206 (Woolwich Road). Pass through 1 roundabout and take the 3rd exit at the next, to stay on Woolwich Road. Turn left at Charlton Lane, continuing on Westmoor Street and Charlton Lane before turning right at Harvey Gardens. The stadium is located on the left.

From the South, drivers are advised to follow the M23 as far as junction 8, taking the M25 exit. Exit the M25 at junction 2, towards London (SE & C). Take the 4th exit at the roundabout, onto the A206 (Woolwich Road). Directions are then as above.

Charlton railway station is within easy walking distance of the ground and is served by trains from Charing Cross, Waterloo East and London Bridge stations. 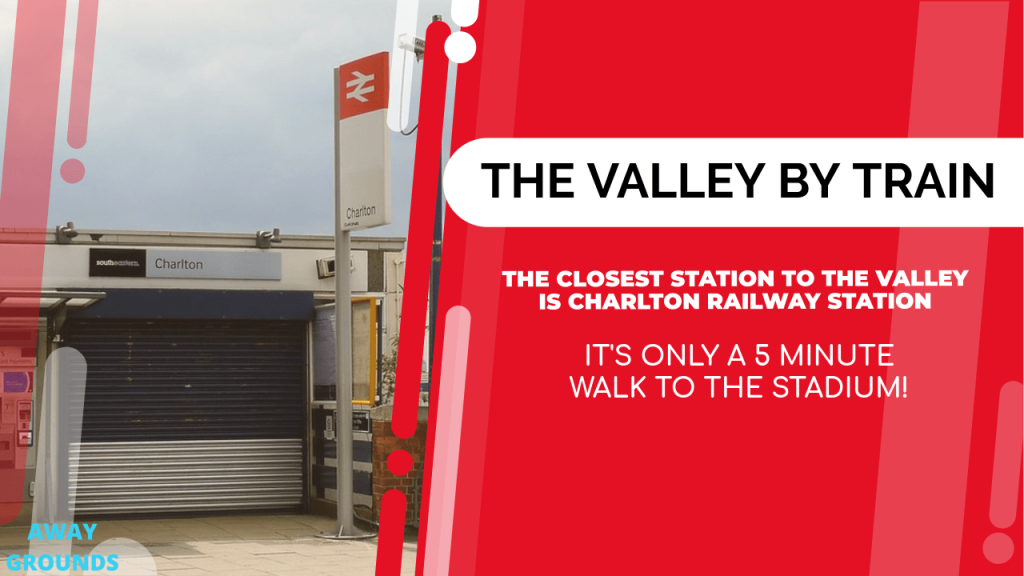 On exiting the station, turn right and cross the road. Turn left into Floyd Road and then right into Valley Grove, where the away entrance is located. Several visitors have suggested the alternative of taking the tube to North Greenwich (Jubilee line), followed by a short bus ride (buses 161, 472 and 486) to the Valley. Click here to check the current timetables

The nearest airport is London City, some 1½ miles from the Valley stadium. The airport has frequent overland Docklands Light Railway connections to Canning Town tube station on the Jubilee Line. Click here to check the current flight times

There are several taxi companies in London that can take you to and from the Valley. You can always prebook a private hire taxi, or hail a black cab on any highway.

On-street parking is extremely limited near the ground and close to Charlton railway station, as residents’ only parking schemes operate in these areas. However, there is some street parking in the area near the Rose of Denmark pub (see below). 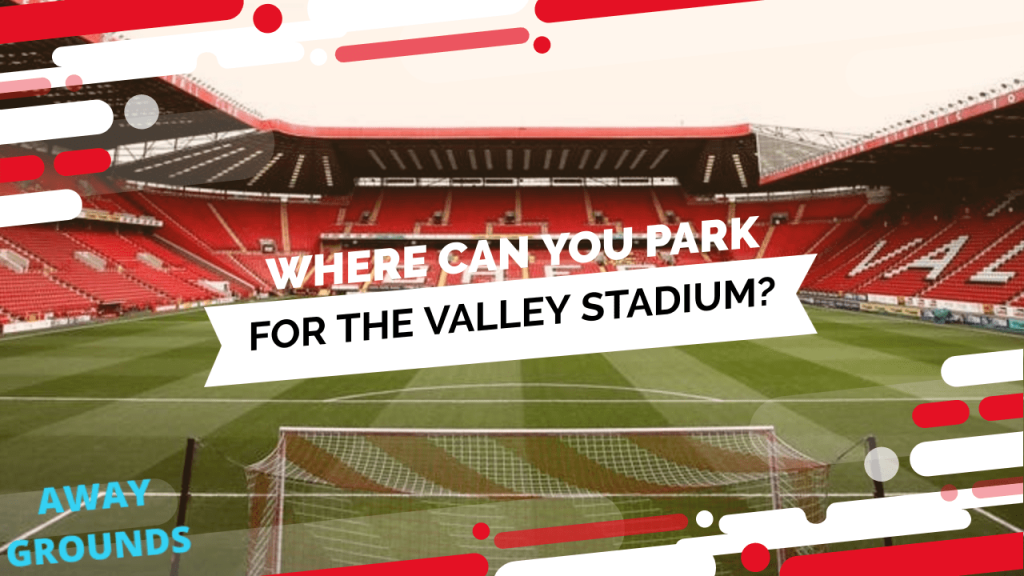 Away Friendly Pubs Near the Valley

The Antigallican, near Charlton station, appears to be a traditional “watering hole” for away fans. However, many have reported that it gets uncomfortably busy on match days. It offers real ale and a limited range of snack food. The Rose of Denmark and the Pickwick, both on Woolwich Road, have received encouraging reports from visiting fans. 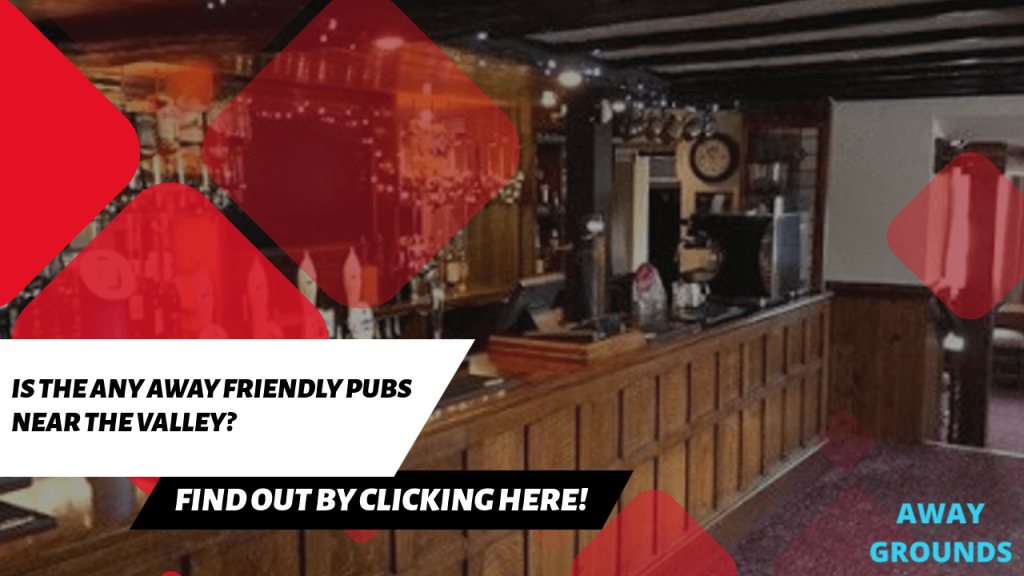 Hotels Near the Valley

The Express By Holiday Inn Greenwich, Bugsbys Way, Greenwich, London SE10 0GD, is located near North Greenwich tube station and is within 1½ miles of the Valley stadium. Its contemporary facilities have attracted some excellent reviews from visiting guests. On-site parking is available at extra charge.novotel london excel

The Novotel London Excel, 7 Western Gateway, Royal Victoria Dock, London E16 1AA is a similar distance from the Charlton ground and has also been the subject of excellent customer reviews. Situated within 30 minutes of Central London, this hotel has a peaceful setting, overlooking Royal Victoria Dock. All rooms are air-conditioned and hotel facilities include steam room and sauna.

What Have Other Away Fans Said About Their Trip to the Valley?

The majority of visiting fans have been impressed by the atmosphere within the stadium. The home fans are passionate and very vocal, but most away fans have not been intimidated in any way. The South Stand is raised above pitch level, offering good views of play. The space between rows of seats offers excellent legroom, whilst remaining close to the action. 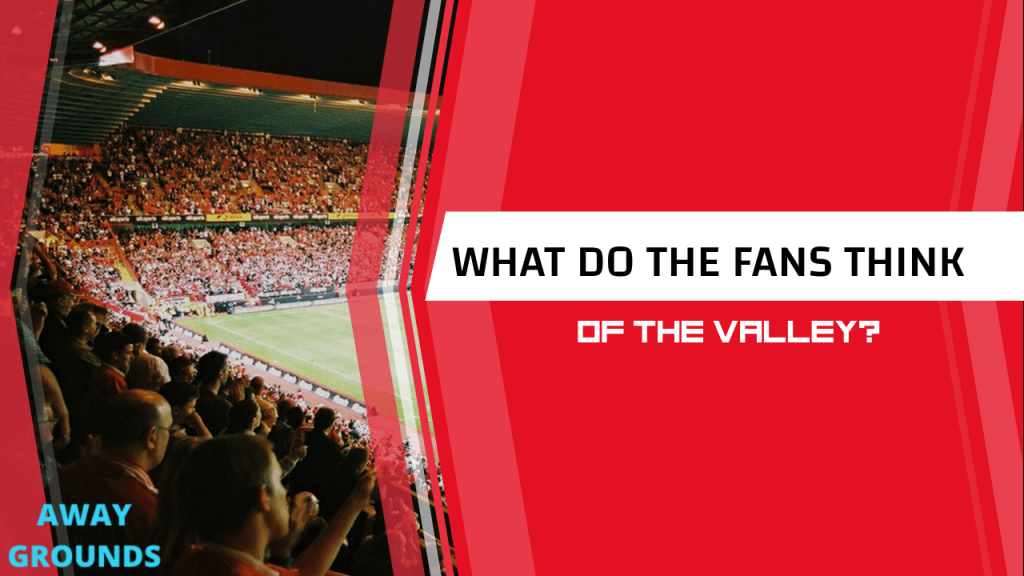 However, several visitors have remarked that the single supporting pillar, in the middle of the away end is an annoyance. The Charlton stewards have been almost universally praised, adopting a relaxed, laid back attitude and only interfering when necessary. Most visitors have also liked the PA system, which while loud is not deafening, and the music played prior to kick-off. Refreshment areas do not tend to become overly congested and offer the usual range of pies, pasties, etc. There are Ladbrokes betting facilities inside the ground.

Which is the away end at The Valley?

The Jimmy Seed (South) Stand is where away fans may be found at The Valley.

What is The Valley away end capacity?

When Charlton Athletic initially came to The Valley in 1919, they had already played at a number of different venues. The stadium was initially merely a pitch and enormous earth banks, giving it the impression of a valley, and was developed with the support of their fans.

Charlton moved to The Mount at Catford in 1923 but returned to The Valley after a proposed merger fell through.

Over the next few decades, the stadium was gradually improved, most notably by converting the earthbanks into concrete terraces and constructing a covered main stand.

The Valley was one of England’s largest stadiums in the late 1930s, with the country’s largest east terrace. In 1938, during an FA Cup match against Aston Villa, the stadium achieved a record attendance of 75,031 spectators.

Few improvements were made in the following decades, until a modest new main stand was built in the late 1970s, followed by the new covered Jimmy Seed Stand at the southern end a few years later.

The club went into administration shortly after, and while a supporters’ trust was able to purchase the club, the stadium remained the property of the previous owner.

As a result, in 1985, Charlton moved to Selhurst Park to share a ground with Crystal Palace. The Valley was reclaimed by the club in 1988, although it had fallen into ruin by that time, and a proposed reconstruction was rejected by the local Greenwich council.

Charlton supporters formed a new political party, and after many victories in the 1990 elections, the proposals were finally approved by the local council. The club stayed at Upton Park for one more year before returning to a rebuilt The Valley in 1992.

Charlton submitted plans in the mid-2000s to reconstruct the East Stand and Jimmy Seed Stand to create a fully enclosed 40,000-seater stadium, however, the plans were never realised due to the club’s relegation. 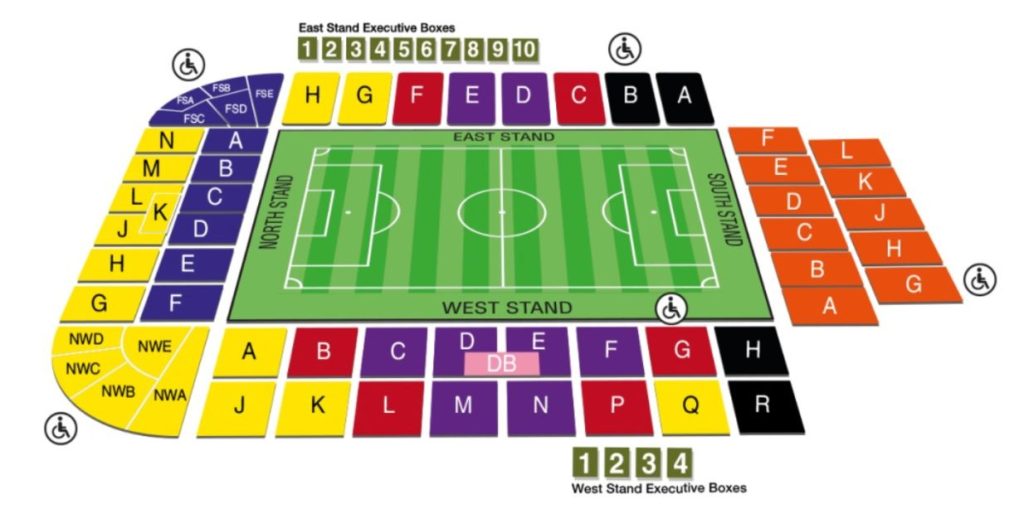 Always a great atmosphere at the Valley football ground. Easy to get via public transport and an enjoyable match day experience.

Events at The Valley

The Valley isn’t only a football stadium. This ground can also be used as a great place to host meetings or conferences, if this is something you could be interested in then read below to find out more about the rooms and which is most ideal for you and your criteria.

Their largest suite, with amazing views of the pitch and stadium, is the North Stand. It is a fully self-contained venue that may be used as a single space or divided into four sections.

They have a variety of flexible facilities that they can tailor to your needs. Their suites all have air conditioning and plenty of natural light.

Their Royal Greenwich Suite is ideal for a planning day or a board meeting if you need a modest conference area.

The 1905 Lounge, which can accommodate up to 200 attendees, is ideal for a theatre-style presentation with workshop sections.

Getting tickets for Charlton Athletic

On the day of the match, tickets are also available at the gate. Charlton rarely sells out its games.

Ticket prices range from £17.00 for a corner seat to £29.00 for a main stand seat in the centre. A handful of high-profile games have had their prices raised by £3.00. If you purchase tickets on the day of the game, they will cost you £3.00 extra.