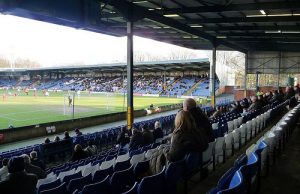 The ground was completely rebuilt in the 1990s. The most recent addition is the attractive Cemetery End Stand, which extends around one corner to meet the South Stand. This stand, which replaced a former terrace, was completed in 1999, making the stadium all-seater.

The opposite Manchester Road End, which houses the away fans, is a covered stand with a scoreboard from Leicester’s old Filbert Street ground. The Main Stand is at the North side of the ground. Its raised seating necessitates entry via a small number of steps.

Opposite is the South Stand, similar in design to the ends with a TV gantry suspended below its roof.

How to get to Gigg Lane

Drivers from all routes should exit the M60 at junction 17, joining the A56 towards Bury. After just over ¼ mile, there are double traffic lights with McDonalds on the left. Carry straight on for a further ¾ mile and bear right, keeping on the A56 towards Bury. Go straight on at the next set of lights (about a mile) and after a further mile turn right into Gigg Lane. The ground is 200 yards on the right.

Bury Metrolink Station, which is served by trams from Manchester Victoria and Manchester Piccadilly, is about a 15-minute walk from the ground. On leaving the station, turn left and follow the pedestrian walkway to the other side of the dual carriageway.

Turn right towards the Town Hall and left into Knowsley Street. At the bottom of Knowsley Street, turn left onto the main A56 Manchester Road and after about ½ mile Gigg Lane is on the left. Alternatively, bus numbers 90, 92, 135 and 137 run every 10 minutes down Manchester Road past the end of Gigg Lane. Click here to check the current train timetables

The nearest airport is Manchester International, at a distance of 17 miles. The airport has frequent rail connections to Manchester Piccadilly, with a journey time of about 20 minutes. Click here to check the current flight times

There are several taxi companies in Bury that can take you to and from Gigg Lane. You can always prebook a private hire taxi, or hail a black cab on any highway.

Calling all Bury Taxi Companies – Why not advertise your company here?.

Visiting fans advise that plenty of street parking is available within comfortable walking distance of the ground.

Away Friendly Pubs near Gigg Lane

The supporters’ club at the ground admits small numbers of visiting fans on payment of a small fee. Several pubs on Manchester Road have been recommended by away fans. The favourite amongst these appears to be the Swan and Cemetery, a comfortable Thwaites pub with a separate restaurant area.

The Waterloo, towards the town centre, and the Pack Horse, nearer the ground, have also been the subject of favourable reports.

The Holiday Inn Bolton Centre, 1 Higher Bridge St, Bolton BL1 2EW offers a sophisticated yet informal atmosphere in the heart of Bolton, but within 5½ miles of Gigg Lane. All rooms have air-conditioning. The hotel is situated at the end of the A666 with easy access from the M61 & M62. Within walking distance of all of Bolton’s Nightlife, it is also within easy reach of Manchester City Centre. marriott worsley park hotelAlso nearby are Camelot Theme Park, The Reebok Stadium, The Trafford Centre, Old Trafford and the City of Manchester Stadium.

Many away fans have been impressed by the modern looks of the stadium. The view from the Manchester Road End is reported good, at a nice height to see everything, but still feel close to the action. Visiting fans of teams with a large support have complained that the supporting pillars, about a third of the way up, can impede the view of play. Catering is reported very good, with a range of tasty burgers, pies and hot dogs on offer.

However, toilet facilities have been described as “archaic.” The ground is also reported to lack atmosphere, predominantly due to the lack of vocal support from the home fans.