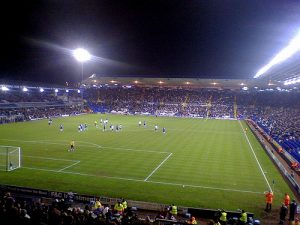 St Andrews Stadium in Bordesley Green, Birmingham has been the home of Birmingham City F.C. since 1906.

Having undergone major refurbishment in the 1990s, it is now an all-seater venue, with a capacity of 30,000. The two-tier Main Stand, on the North side of the ground, dates back to 1954. The upper tier has standard seating and a media area, while the lower tier (“the Paddocks”) consists of a limited number of seats placed on the terraced area in front of the stand. The club plans £1.3 million worth of restructuring work during the 2009 close season.

Relegation to the Third Division freed the club from the 1994 Taylor Report deadline for conversion of all stadia in the top two divisions to all-seater. However, Birmingham continued with their planned £4.5 million development scheme. At the end of the 1993-94 season, the Kop and Tilton Road terraces were demolished, to be replaced by all-seater, single tier stands forming a continuous L-shaped structure around half the pitch. Construction of the two-tier Railway (West) Stand was delayed by a lack of planning permission and only opened in 1999. The lower tier houses away fans. Family areas are available in the lower Railway Stand and Main Stand Paddocks, though from 2009-10 onwards, a single family area is planned in the Kop Stand.

How to Get to St. Andrews

Away fans driving from the North should follow the M6 as far a junction 6, exiting towards A38 (M) / Birmingham. After about ½ mile, merge onto the A5127 / Aston Expy, taking the ramp onto the A38 / Aston Rd after about 500 yards. After about a mile, take the 1st exit at the roundabout (A4540 / Dartmouth Circus) towards Lichfield / A45 / A47 / B’ham. After passing through 3 roundabouts, take a slight left onto St. Andrew’s Road. 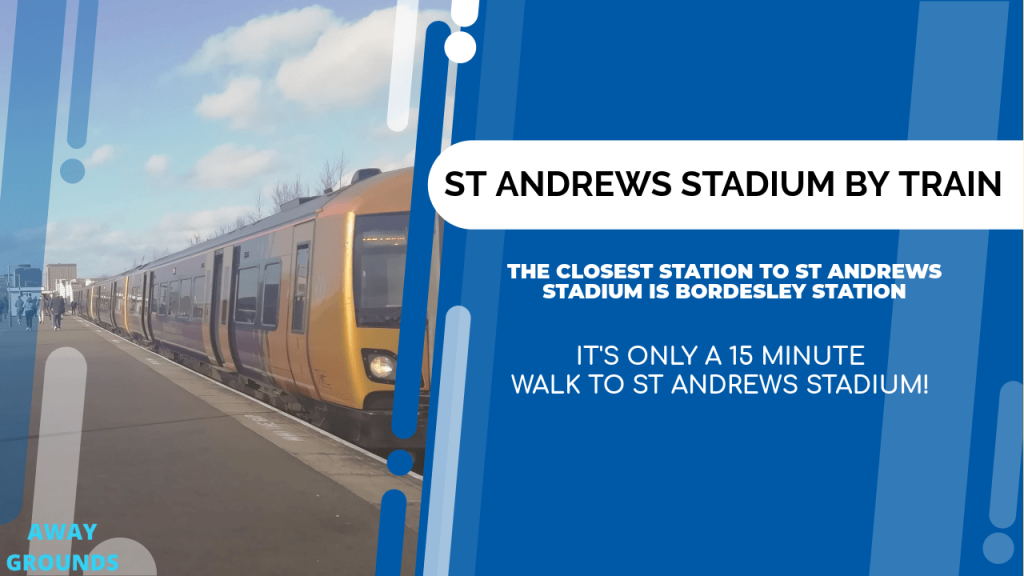 Additionally, Digbeth Coach Station is a 15-minute walk away, with regular services to the stadium. Click here to check the current train timetables

The nearest airport is Birmingham International, about 10 miles away, with 9 trains per hour connecting to Birmingham New Street, with a journey time of 10-20 minutes. Click here to check the current flight times

There are several taxi companies in Birmingham that can take you to and from St Andrews. You can always prebook a private hire taxi, or hail a black cab on any highway.

Calling all Birmingham Taxi Companies – Why not advertise your company here?.

There is a small car park at the away end, but this is shared with coaches, so space can be very limited. Limited on-street parking is available for early arrivals. Several fans have recommended parking at the “Birmingham Wheels” racing circuit in Saltley.

Getting Tickets for Birmingham City FC

If tickets are still available on the day of the game, they can be purchased at the stadium. In the Championship, Birmingham City rarely sells out.

Ticket costs normally range from £25.00 for an upper-tier ticket behind the goal to £30.00 for alongside seat. If you purchase tickets in advance, you will save £5.00.

On the 26th of December 1906, St. Andrew’s Stadium hosted a league match between Birmingham City and Middlesbrough. The stadium had a capacity of 75,000 spectators and had one covered main stand and open terraces on the other sides.

In the 1930s, minor modifications were made, primarily by expanding seating capacity, and a record attendance was established on March 11, 1939, when 66,844 supporters attended an FA Cup match against Everton.

During WWII, the stadium was severely destroyed, but it was quickly rebuilt.

In the 1950s and 1960s, St. Andrew’s Stadium was further expanded, beginning with the construction of a new main stand in the early 1950s, followed by another new stand at the Railway End, and lastly new roofs over the Kop and Tilton Road end.

Over the next two decades, no changes were done, and by the late 1980s, the stadium had fallen into ruin. In addition, due to safety concerns, capacity had been reduced to just 26,000 people.

Birmingham City began a reconstruction effort in the early 1990s, beginning with the destruction of the Kop and Tilton Road terraces. In their place, two new all-seater stands were constructed.

With the opening of a new stand at the Railway End in 1999, the project was finished.

Birmingham City was involved in plans to replace St. Andrew’s with a 55,000-seater multi-purpose stadium in the mid-2000s, however these plans never came true.

St. Andrew’s Trillion Trophy Stadium takes pleasure in providing a first-class events service to all of its customers and recognises that exceptional events require extra thinking, time, and effort.

You will discover the appropriate suite to organise your unique event, from an exhibition or conference to a personal interview or board meeting, among the nine suites and 17 executive boxes available for private hire. 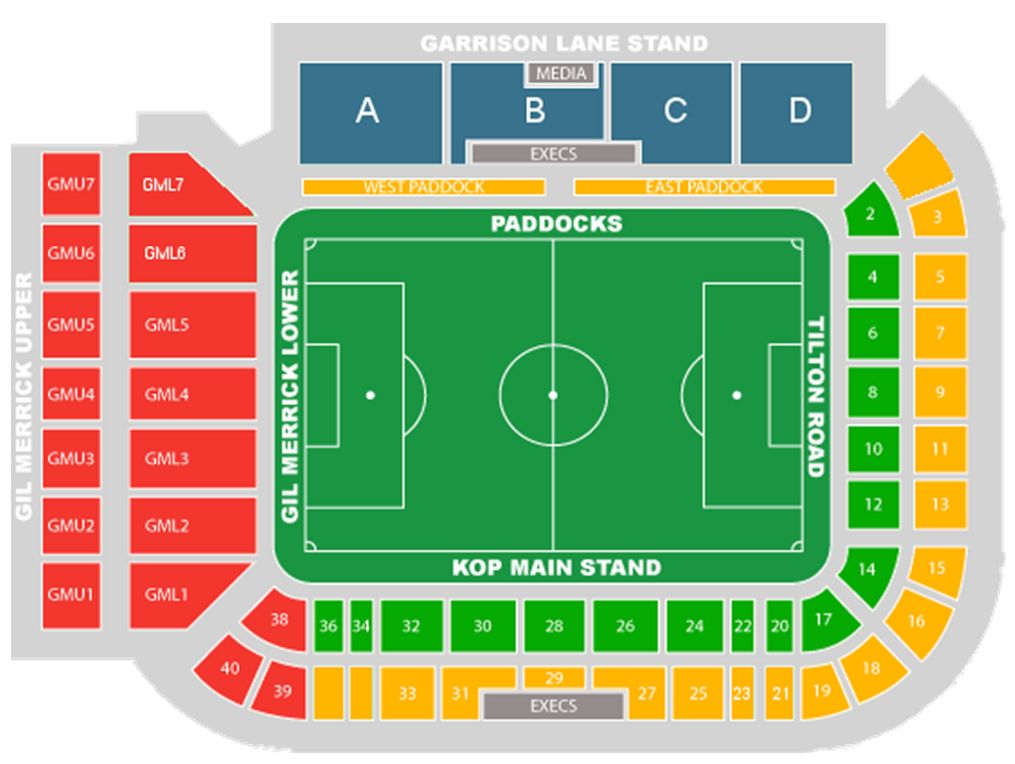 The tour lasts around 90 minutes and includes the following activities:

Away Friendly Pubs Near St. Andrew’s

Most of the pubs near St. Andrew’s are not recommended for away supporters. For those arriving by train, many away fans have recommended The Wellington, on Bennetts Hill. This pub specialises in real ales, with about 15 different types. It does not serve food, but has no objections to patrons bringing their own. The Briar Rose, also on Bennetts Hill, has received favourable reviews. 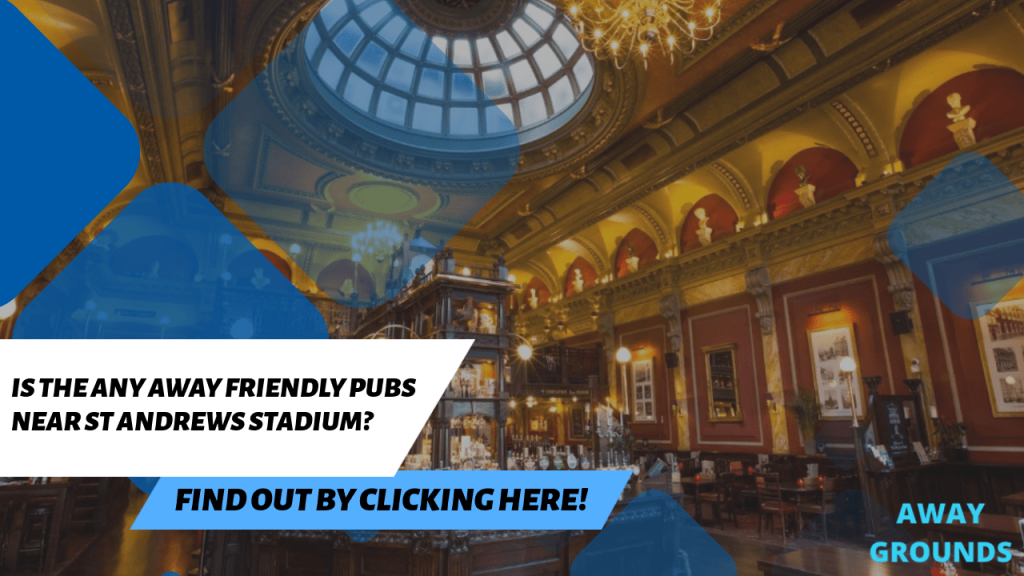 En route to the ground, The Anchor, on Bradford Street (behind Digbeth bus station) is frequented by some home fans, but the welcome is reported as friendly. The Cricketers Arms is a 10-minute walk from the ground and is another pub shared by home and away fans. It is small and crowded, though there are tables outside. Otherwise, alcohol is served within the stadium.

The 4-star Thistle Birmingham City, Saint Chads Queensway, Birmingham B4 6HY is 1½ miles from the city centre and has received excellent reviews with regard to service, comfort, cleanliness and value for money. It is adjacent to an NCP car park. 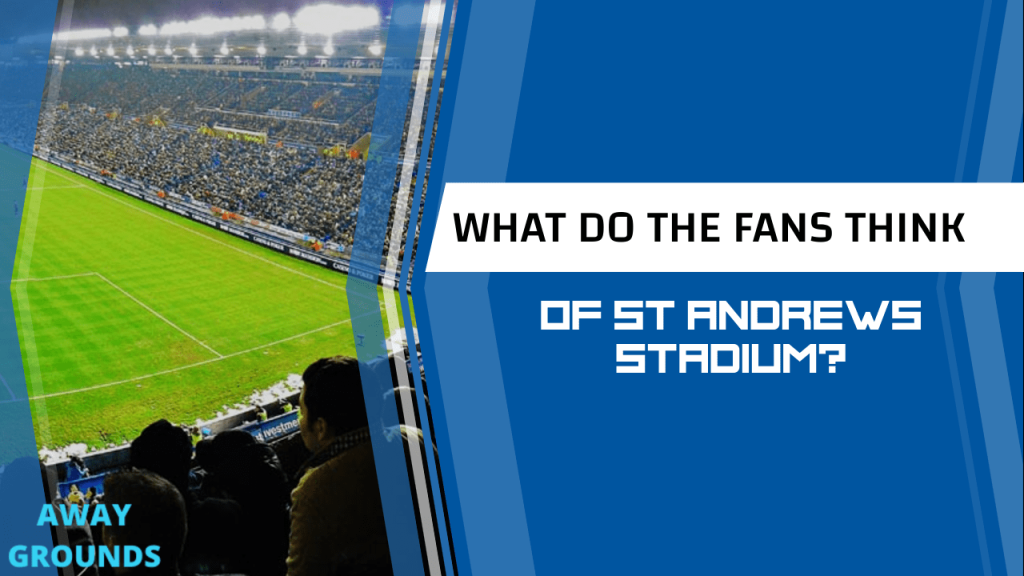 The Ramada Birmingham City Centre, 160 Wharfside Street, The Mailbox, Birmingham B1 1RL is located in the Mailbox leisure and shopping centre, about 1½ miles from St. Andrew’s. The hotel is a glass-fronted building overlooking Birmingham’s canals. The rooms have airy modern décor, TV with pay movies, direct-dial phones with free local calls, coffee/tea makers and wireless internet connections. Satellite TV is provided in the bar lounge.

Been to many matches here over the last few years as I am a lifelong supporter. Food is always the good staff are friendly and helpful and the stadium is about as clean as a football stadium can be.

Great old stadium with good loyal support. A good selection of pubs not too far away and a short walk to the city centre.

What is the capacity at St Andrews Stadium?

What is St Andrews away end capacity?

The capacity of the away end in St Andrews is 3,000, with the possibility of increasing to 4,500 depending on demand.

Which is the away end at St Andrews?

Away fans visiting St Andrew’s sit in the lowest tier of the Gil Merrick Stand on one side.

Thank you for reading our guide to St Andrews Stadium. We hope you found the information you needed and made your day of watching football more enjoyable.

We hope your team wins!