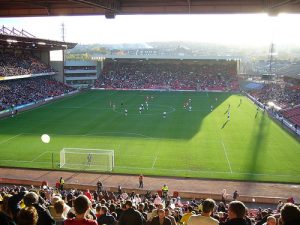 Barnsley’s Oakwell Stadium is an all-seater venue, with a capacity of 23,000.

Much of the ground was updated in the 1990s. The two-tier East Stand, running along the side of the playing surface, was opened in 1993. Parts of the West Stand date back to 1904. Though former terraces have been replaced with seats, the roof only covers the rear third, leaving the rest exposed to the elements.

The CK Beckett (South) Stand is a fully covered stand allocated to home supporters. The fully covered, single-tier North Stand is the most recent addition, opened in 1999, to replace open terracing.

With a capacity of some 6,000, away fans are usually allocated the Western portion of this stand, with home supporters occupying the Eastern section. However, if the away support is unusually large, the whole stand is reserved for the away fans. There is an electronic scoreboard at one corner of the North Stand. Oakwell has a purpose built stand for disabled fans. This is a three-tier structure at the corner of the East and South Stands.

How to get to Oakwell

Drivers arriving from the North should follow the southbound A1 / A1M. After passing junction 45 (A64 Leeds / York), follow signage for the M1. Join the M1 at junction 48, exiting at junction 37. Turn left onto the A628, following signage for Barnsley FC. The ground is visible after about 2 miles.

Away fans driving from the South are advised to exit the M1 at junction 36, onto the A61. At the roundabout, take the 3rd exit, continuing on the A61 towards Barnsley (South). At the next roundabout, take the 1st exit, continuing on the A61 for a further 3 miles. A right turn into Bank End Road and a slight right at Grove Street will lead to the stadium, situated on the left.

Barnsley railway station is only about 500 yards from the Oakwell Stadium. 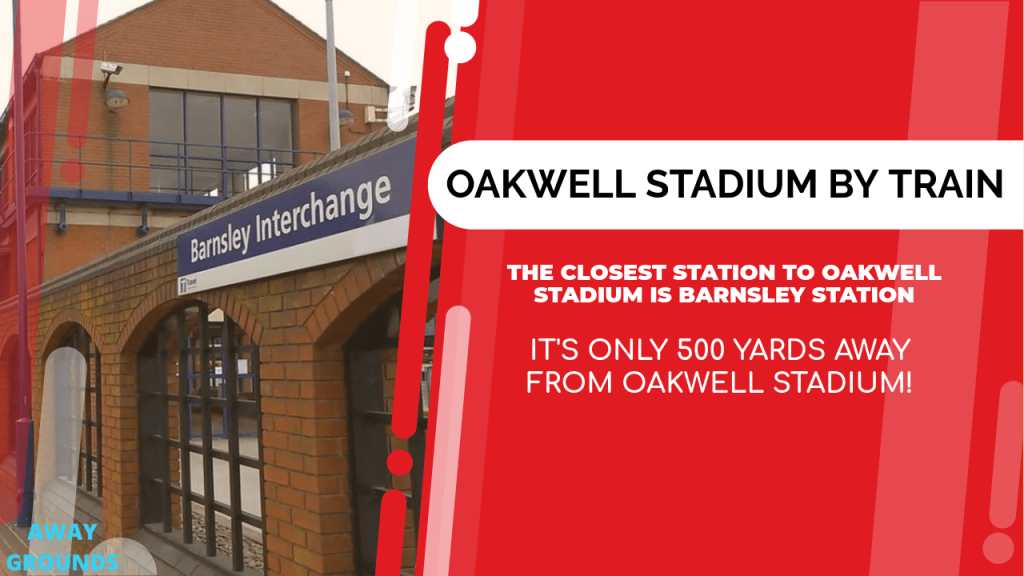 On exiting the station, turn left away from the town centre. Pass under the bridge, turn left up the slip road, then first right towards the Metro Dome complex. The ground soon becomes visible. Click here to check the current train timetables

The nearest airport is Leeds Bradford International, some 23 miles away. Regular connections to Barnsley (via Leeds) are available, with a total journey time of about 2 hours. Click here to check the current flight times

There are several taxi companies in Barnsley that can take you to and from Oakwell. You can always prebook a private hire taxi, or hail a black cab on any highway.

Calling all Barnsley Taxi Companies – Why not advertise your company here?.

Many fans recommend parking in the County Way car park, near the railway station or the car park on Queen’s Road, just to the West of the ground. 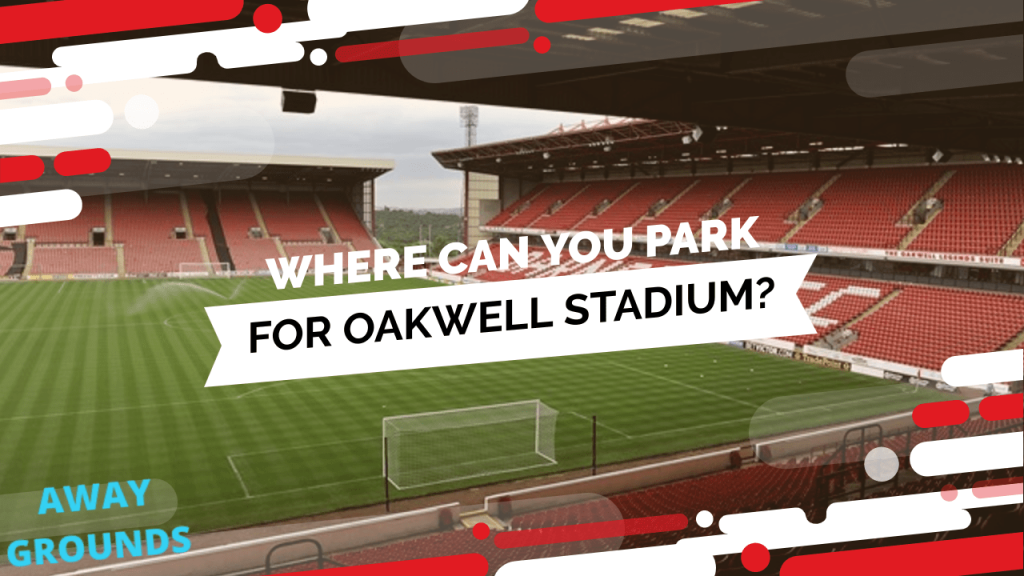 There is also a large away supporters’ car park at the ground and limited, unrestricted on-street parking.

Away Friendly Pubs near Oakwell

Away supporters generally recommend avoiding the town centre, especially pubs near the train station. Most visitors recommend the Metro Dome, a leisure centre within a few minutes walk of the away end. Its bar has a good atmosphere, serving a selection of ales and decent food. However, it does get very crowded. 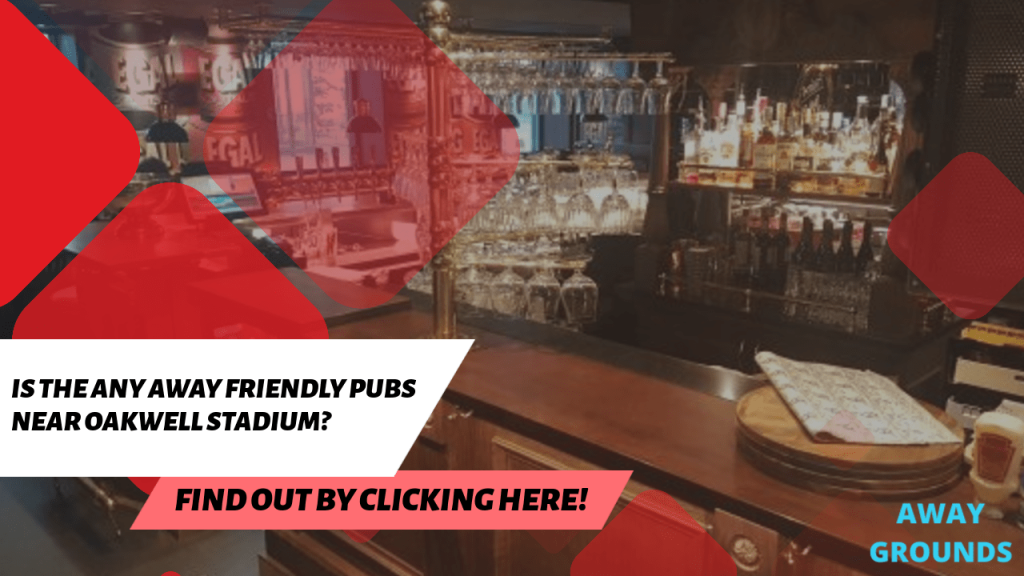 The Holleywell, on Oakwell Road, and The Outpost, on Sheffield Road both offer a friendly atmosphere, with a genial mix of home and away supporters. Inside the ground, when the whole stand is allocated to away fans, alcohol is available from a bar on the concourse.

The Best Western Ardsley House, Doncaster Road, Barnsley S71 5EH is just over 2 miles from the city centre.Recent guest reviews have been favourable, noting value for money, room quality, service and food as excellent, with live music on Saturday evenings.

What have other Away Fans said about their trip to Oakwell?

The majority of visiting fans found the home support friendly enough in and around the ground, though several have experienced problems in the town centre and advise keeping colours covered. Many visitors have been impressed by friendly, helpful club staff, though there have been several reports of overzealous stewarding. Most away fans have been impressed by the large North Stand, both in terms of looks and facilities, though many have reported that it is extremely cold. 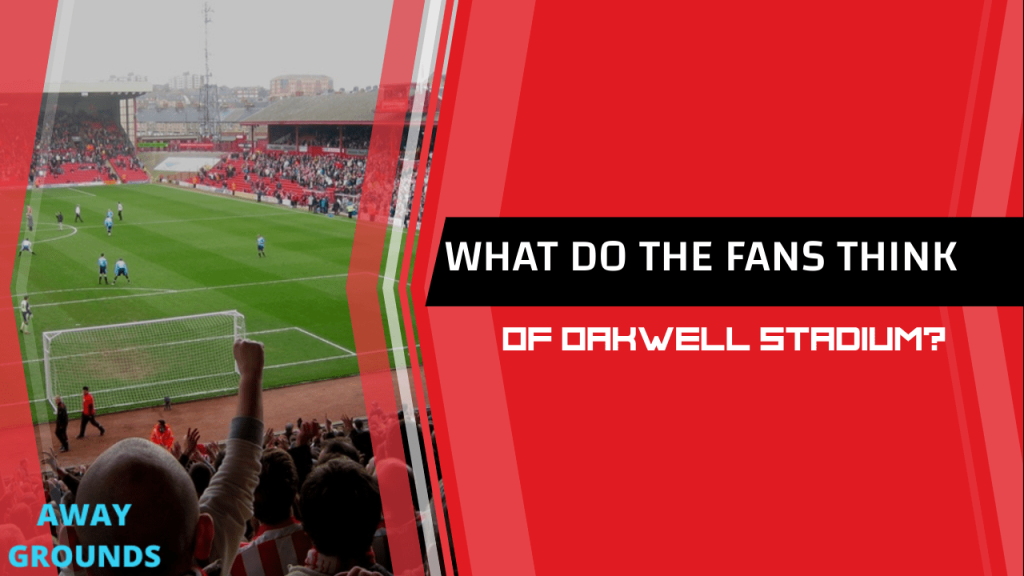 The combination of traditional and modern styling has impressed many, along with the excellent acoustics. There is a wide range of good quality food on offer, though it is expensive, even by football ground standards. Away fans using the club car park should be aware than most visitors have experienced delays of up to 30 minutes in exiting after the match.

Oakwell Stadium was refurbished over the 1990s, with the club’s lone season in the Premier League nearly entirely covering the cost of the re-building of the North Stand; much to the disappointment of some fans, it cost £4.5 million.

It was believed that the club would be able to develop the ageing West Stand, but the team’s relegation from the Premier League and subsequent financial difficulties put an end to that idea.

A lot of attempts have been made to utilise the ground for reasons other than Barnsley matches. Wakefield Trinity Wildcats Rugby League Club, for example, played their first Super League game there in 1998.

In the same year, Wakefield & Emley non-league Football Club played Rotherham in an FA Cup tie, and Manchester City played there in a UEFA Cup qualification game while the pitch at the City Of Manchester Stadium was being relaid in the summer of 2008.

Below is an image of the Barnsley FC seating plan: 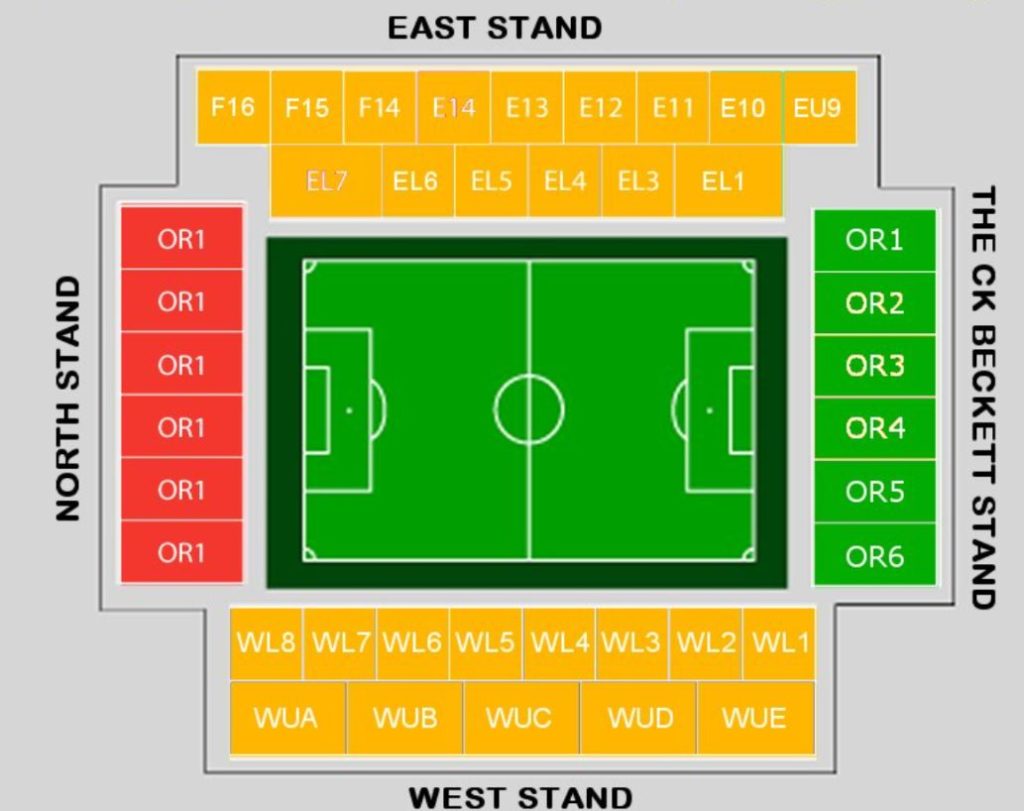 Oakwell Stadium host a lot more than just football games. Barnsley, like the majority of clubs with strong hospitality options, allows private hiring of its function rooms and suites if desired.

Business conferences (with the executive boxes serving as breakout rooms), seminars, exhibitions, sportsmen’s banquets, and other events have all taken place in the stadium in the past.

The standard areas you’d expect to see on a tour, such as the dressing rooms, the players’ tunnel, and the dugouts, have been included in previous tours.

You’ll also have access to the head coach’s office, where he prepares for games, as well as locations generally reserved for match day officials, the press room, and even the hospitality suites.

Getting tickets for Oakwell Stadium

Barnsley, like most Football League clubs on the cutting edge, has a fantastic website that will be the first stop for most fans wishing to purchase tickets. However, for those of you who prefer a more traditional method of working, there is a ticket office that you may visit in person or call over the phone.

Barnsley has decided to divide their games into three categories: A, B, and C, with all tickets costing two pounds less if purchased in advance rather than on the day of the game.

They have a fixed charge throughout the stadium, with only the match type and your age determining the varying amounts you’ll pay. The matchday prices for adults and concessions in each category are as follows:

Fantastic atmosphere, fantastic food, would highly recommend booking a table for a business or family day out.

I took my daughter to watch Barnsley play for her birthday. Excellent atmosphere and place, she really enjoyed it – will definately go again

How far is Barnsley FC from the train station?

Oakwell Stadium is about a 1o minute walk from the train staion.

The owner of Oakwell Stadium is Barnsley Metropolitan Borough Council.

What is Oakwell Stadium away end capacity?

The capacity for Oakwell Stadium’s away end is 2000.

Which is the away end at Oakwell Stadium?

The away end at Oakwell Stadium is The North Stand.

What is the Barnsley FC postcode?

Thank you for reading our guide to Barnsley FC.

We hope you’ve found all the information you need to make your day watching football more fun and enjoyable.