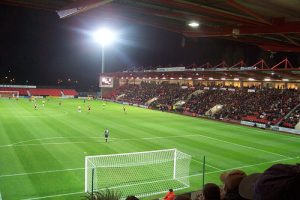 The Fitness First Stadium, home ground of AFC Bournemouth is an all-seater venue, with a capacity of 10,700.

Despite the club’s lucrative stadium sponsorship deal with Fitness First, it is still (and will always be) known by many fans as Dean Court.

The home of AFC Bournemouth since 1910, it was completely rebuilt in 2001, with the pitch being rotated 90 degrees from its original position. It comprises 3, covered, single tier stands, with windshields on both sides. There is an unused, open area at the South end of the ground.

How to get to the Fitness First Stadium

Getting to Fitness First Stadium By Road

Drivers arriving from the North should follow the M6, exiting onto the M42 towards London, Warwick and Solihull, exiting at junction 3a onto the M40. Leave the M40 at junction 9, taking the A31 / A34 exit. At the Wendlebury Interchange, take the 3rd exit onto the A34 towards Oxford / Newbury. At the roundabout, take the 3rd exit onto the M3. Follow the M27 and A31, exiting onto the A338 towards Bournemouth. Take the exit towards Boscombe, taking the 2nd exit at the roundabout, into King’s Park Drive. The ground is on the left.

From the South East, follow the A27, M27 and A31, exiting onto the A338 towards Bournemouth at the Ashley Heath roundabout. Having gone over the flyover, take the next slip road on the left and go straight across the mini-roundabout King’s Park.

From the South West, follow the A35 to the A338. On the A338 take the slip road to the Springbourne Roundabout signposted King’s Park. Take the 3rd exit off the roundabout. Turn left at the fire station onto Holdenhurst Road. Keep left and go straight on at the traffic lights (the Queen’s Park Pub is on the right). Go around the small roundabout and into King’s Park.

Getting to Fitness First Stadium By Rail

Pokesdown, served by trains from London Waterloo, is the nearest station. It is about a mile and a 15-minute walk from the ground. On exiting the station, turn right onto Christchurch road. After about 450 yards, turn right into Gloucester Road. The Fitness First Stadium at is the bottom of this road. 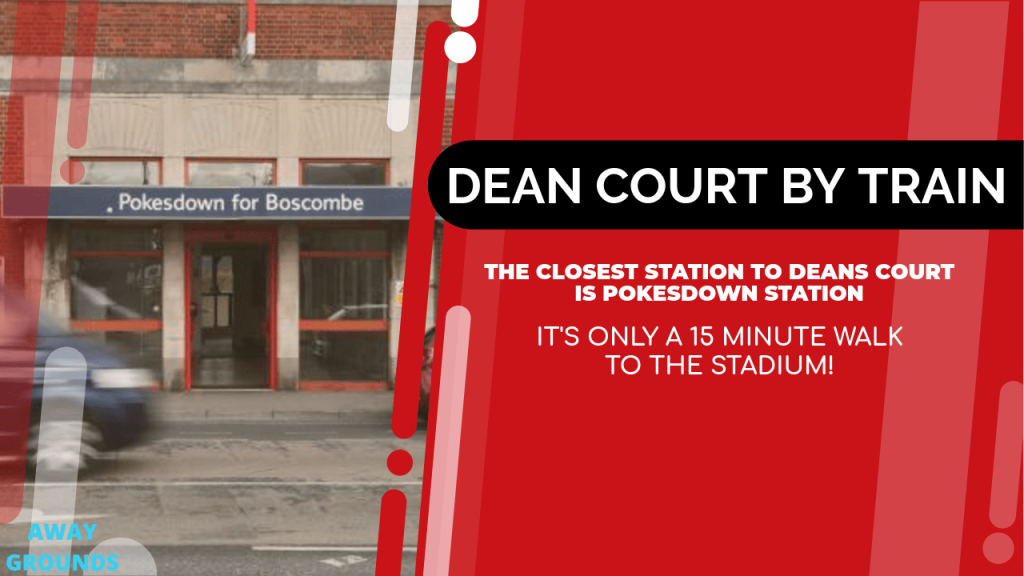 Bournemouth Central station is a good ½ hour walk from the ground, but rail connections are available to Pokesdown. Otherwise, leave the station by the South exit and turn left. Yellow Bus no. 33 runs to King’s Park Drive from the stop near the service station. Use service no. 2 for the return trip. Click here to check the current train timetables

Getting to Fitness First Stadium By Air

The nearest airport is Bournemouth, at a distance of just over 3 miles. Click here to check the current flight times

Getting to Fitness First Stadium By Taxis

There are several taxi companies in Bournemouth that can take you to and from Dean Court. You can always prebook a private hire taxi, or hail a black cab on any highway.

Calling all Bournemouth Taxi Companies – Why not advertise your company here?.

Where to Park at Fitness First Stadium?

There is a large car park located on the ground. 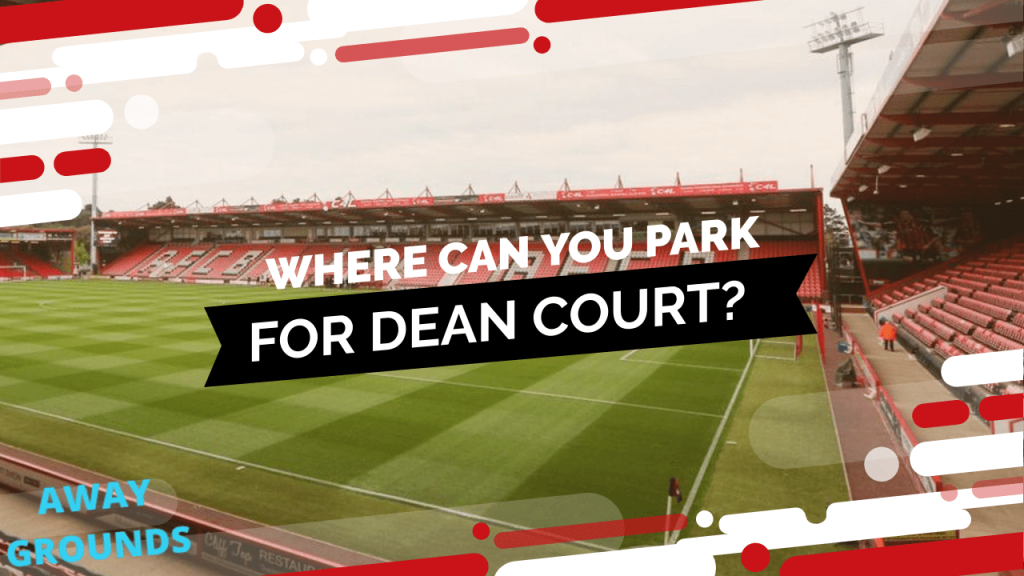 However, visiting fans recommend that those seeking a quick getaway after the match park in the council run car park on the opposite side of the dual carriageway.

Away Friendly Pubs near the Fitness First Stadium

The main pub for away supporters is the Queens Park, which is situated by the Wessex Way dual carriageway. The pub is popular with both home and away fans and serves Ringwood real ale. On my visits it has been relaxed, with home fans tending to congregate in the bar and the away fans in the lounge. 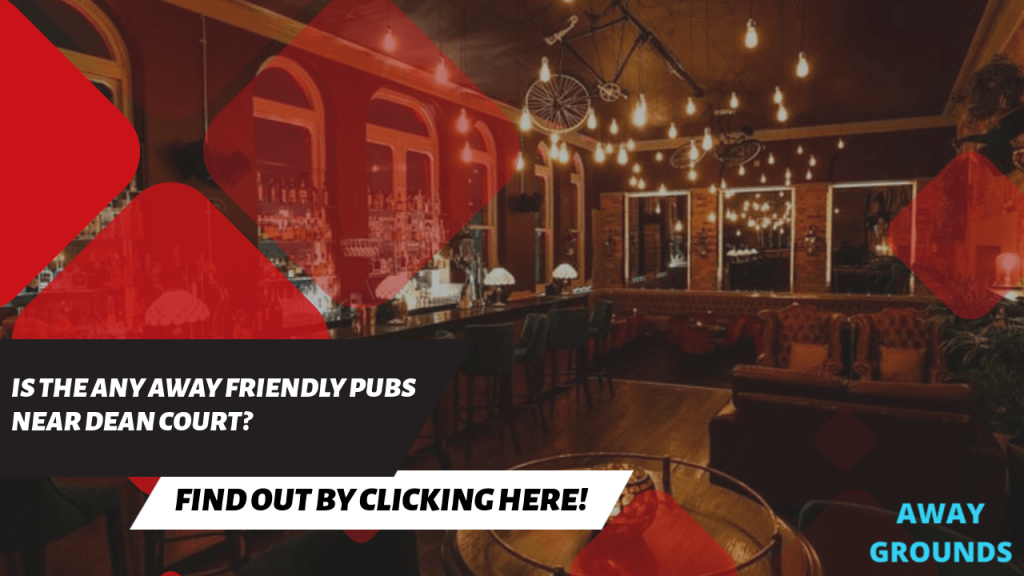 To find this pub, simply walk away from the ground, on the road going from the main entrance to the stadium. At the end of the road turn left and the pub is a little way up on the left.

Hotels near the Fitness First Stadium

The Village Hotel Bournemouth, Wessex Fields, Deansleigh Rd, Bournemouth, BH7 7DZ opened in December 2005 and is easily accessible from the main routes into the centre of Bournemouth. As well as comfortable rooms, the hotel offers fantastic leisure facilities with heated indoor pool, sauna, steam room and whirlpool spa. Guest reviews suggest that it is ideally located (within a mile of the Fitness First Stadium), offering excellent service from helpful staff.

The Roundhouse, 1 Meyrick Road, Lansdowne, Bournemouth, BH1 2PR is easily accessible by road, close to the central rail and bus stations and only 1½ miles from the ground. Guest reviews note excellent value for money, good food and helpful staff.

Most visiting fans report a good atmosphere in the East Stand, which is shared with home supporters, though this is not helped by the open, unused South end. Seating is reportedly a little cramped, but the views of the playing action are good. 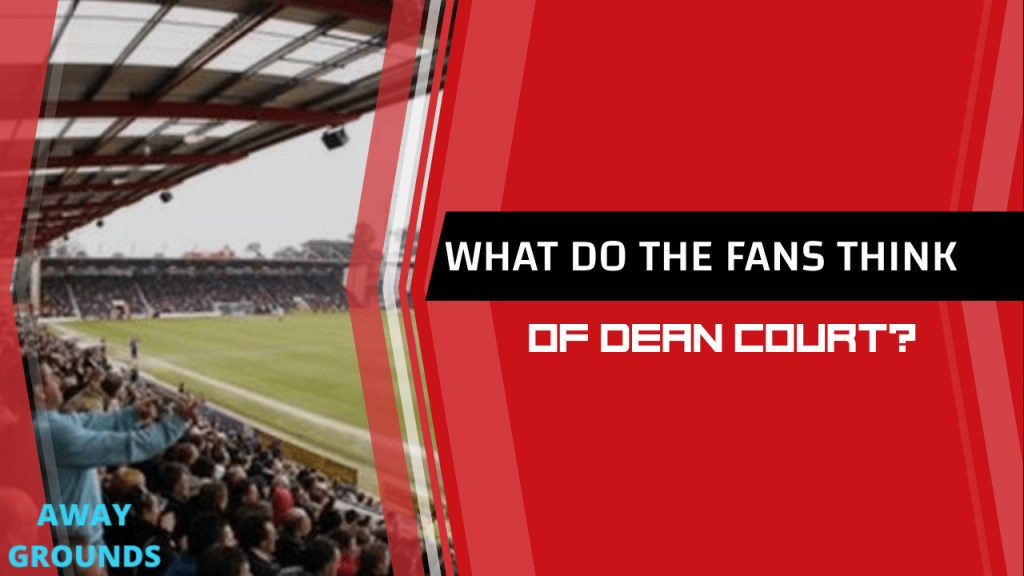 Facilities are reportedly okay, with respectable toilets and a wide concourse, allowing plenty of room for queuing. Stewards are reported friendly and unobtrusive.

Overall I would say Dean Court is a fantastic ground which I will definitely return to.

Parking is the best and the cheapest of any ground I have ever been to anywhere.

Fitness First Stadium has a variety of rooms in various sizes and forms from which you can select the ideal venue for your special event.

Whether you’re planning a charity event, a wedding, a birthday, an anniversary, a school prom, a dinner, a christening, or another social event, you can be assured that their team will assist you throughout the process.

They have the capability and knowledge to accommodate for whatever event you require, from the intricate details of the design and print of your stationery to offering details of local suppliers and their chefs supplying you with a vast number of bespoke food options.

Getting Tickets for Fitness First Stadium

Bournemouth tickets may be purchased online, by phone at +44 (0) 344 576 1910, or in person at the Vitality Stadium ticket office or the BIC & Pavilion ticket office on Exeter Road, just off The Square in Bournemouth’s town centre.

In their debut season in the Premier League, Bournemouth has sold out every match, and tickets are usually only available once a specific number of loyalty points have been accumulated. 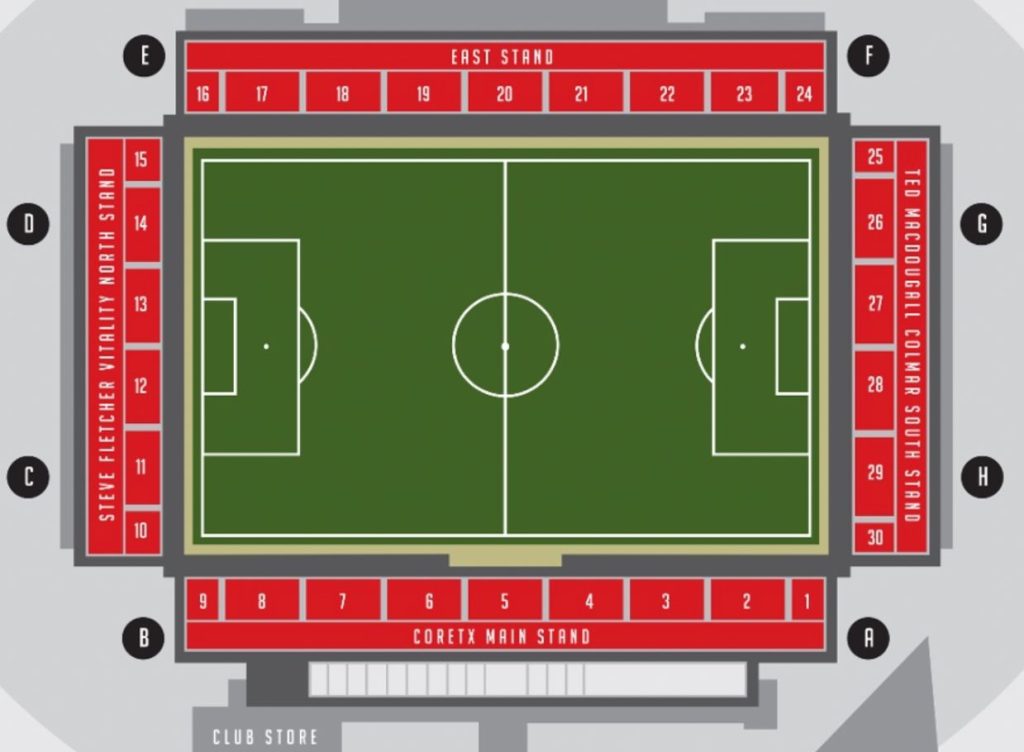 What league are Bournemouth FC in?

Bournemouth FC is in the EFL Championship.

Why are Bournemouth called the cherries?

The Cherries got their nickname from the cherry red clothes they wear on the field, as well as the fact that the stadium was built close to many cherry trees.

The owner of Vitality Stadium is Structadene.

The Vitality Stadium, also known as Dean Court, was first constructed in 1910 and consisted of only a single tiny stand.

In the 1930s, further stands and terraces were added, and Dean Court saw its highest attendance in 1957, when 28,799 fans attended an FA Cup match against Manchester United.

In the 1980s, there were plans to enlarge the stadium, but these were shelved due to a lack of funds. In 2001, the stadium was totally refurbished with the pitch rotated 90 degrees, however initially lacking a South Stand. Various temporary structures were placed at the empty end over the years before a permanent stand was ultimately completed in 2013.

Dean Court has had a number of sponsors over the years, starting with Fitness First Stadium in 2001, Seward Stadium in 2011, and Goldsands Stadium in 2012. The latest naming rights contract was announced in the summer of 2015, and the stadium is now known as Vitality Stadium.

Following their promotion to the Premier League, the club considered extending the Vitality Stadium to a capacity of 18,000 seats, but after a failed attempt to repurchase the stadium from a property company that had purchased it in 2005, the team decided to build a new stadium instead.

The Fitness First Stadium, also known as the Vitality Stadium, is a fans favourite. This stadium has a capacity of 18,000 and has a record attendance of 28,799.

Home and away fans describe this stadium as a friendly ground with a great atmosphere.

Vitality Stadium has the ability to meet any requirements when it comes to holding one of your events so why not book your special function and give your friends and family the chance to visit this beautiful stadium.