The Fraser Eagle Stadium, home to Accrington Stanley has a capacity of 5,050, with seating for 1,200.

Built in 1968, it is the smallest stadium in the Football League. On one side, the Main Stand actually comprises 2 separate stands with a gap between them. To compensate for the slope of the pitch, one of these, the Thwaites Stand, has fewer rows of seats than the other half of the Main Stand.

Opposite is the very small, covered Whinney Hill Terrace, comprising just three rows with supporting pillars across the middle. Both ends are terraces, of which the home Clayton End is covered, whilst the Coppice Terrace opposite is open to the elements.

How to get to the Fraser Eagle Stadium

From the North, drivers should follow the M6 as far as junction 30, exiting onto the M61 towards Manchester / Blackburn / Leeds / M65 / Bolton / M62. Exit the M61 at junction 9, onto the M65 towards Blackburn / Burnley. At junction 7, take the A6185 exit. At the roundabout, take the 1st exit onto A6185 / Dunkenhalgh Way heading to Clitheroe / A59. Turn right into Blackburn Road, right again into Whalley Road and left into Livingstone Road.

From the South, leave the M6 at junction 29, taking the M65 towards Blackburn. Continue past Blackburn and exit at junction 7. At the roundabout, take the A6185 exit towards Clitheroe. Turn right at the 1st set of lights onto the A678, towards Padiham. Turn right at the next traffic lights onto the A680 towards Accrington. The Crown Pub (see below) is on the left after about ½ mile. Livingston Road is the next left, with the official car park immediately on the left.

Accrington station is about a mile away from the ground. On exiting the station, walk down the hill towards the large roundabout in the centre of town. Take the Milnshaw Lane exit at the opposite side of the roundabout. After approximately 100 yards, this road joins Whalley Road. 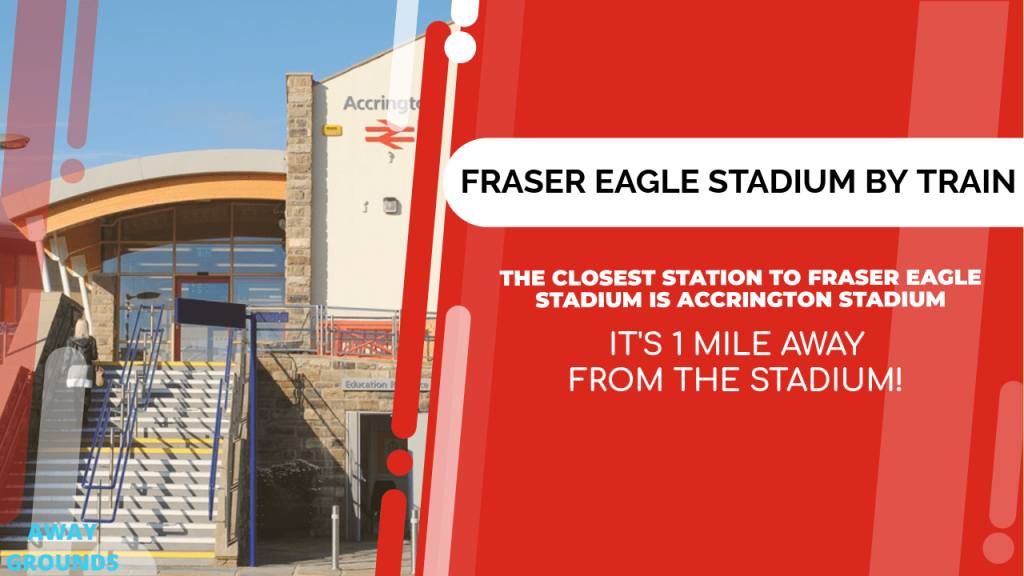 Bear left up the hill and follow Whalley Road for about a mile, passing the hospital, traffic lights and a mini roundabout. Take the next right into Livingstone Road. The football club is approximately 100 yards on the left. Click here to check the current train timetables

The nearest airport is Blackpool International at a distance of 27 miles. Click here to check the current flight times

There are several taxi companies in Accrington that can take you to and from the Fraser Eagle Stadium. You can always prebook a private hire taxi, or hail a black cab on any highway.
Calling all Accrington Taxi Companies – Why not advertise your company here?.

The club has a reasonable sized, free car park on Livingstone Road, but this fills up quickly. 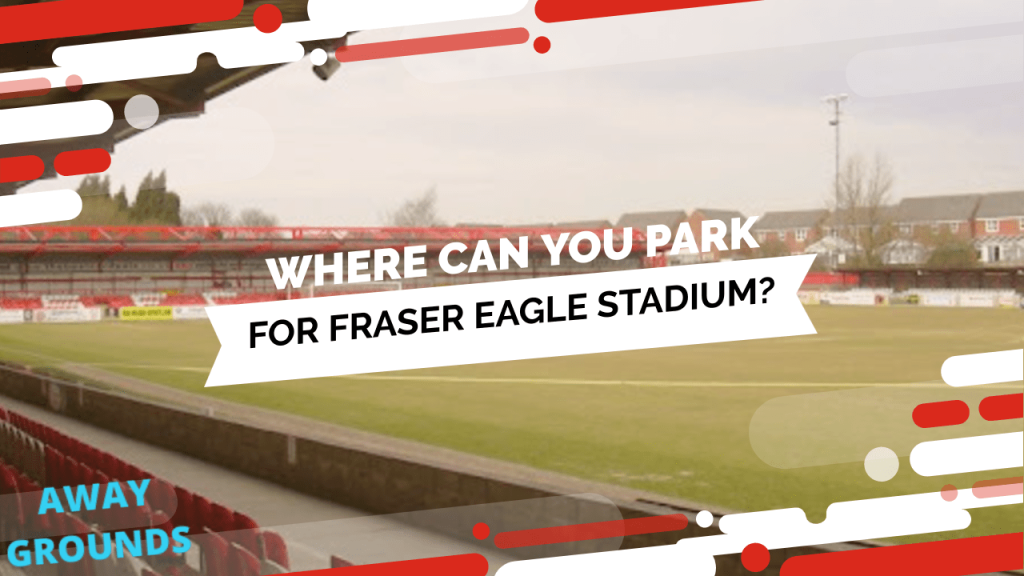 However, plenty of street parking is available, particularly near the Grey Horse pub (see below).

Away Friendly Pubs near the Fraser Eagle Stadium

The nearest pub is the Crown, behind the ground on Whalley Road. It is usually very busy on match days, but has plenty of staff serving, so drinks arrive relatively quickly. A further 5-minute walk down Whalley Road in the direction of the motorway, the Greyhound pub, a Sam Smith’s house, has also been the subject of good reports. 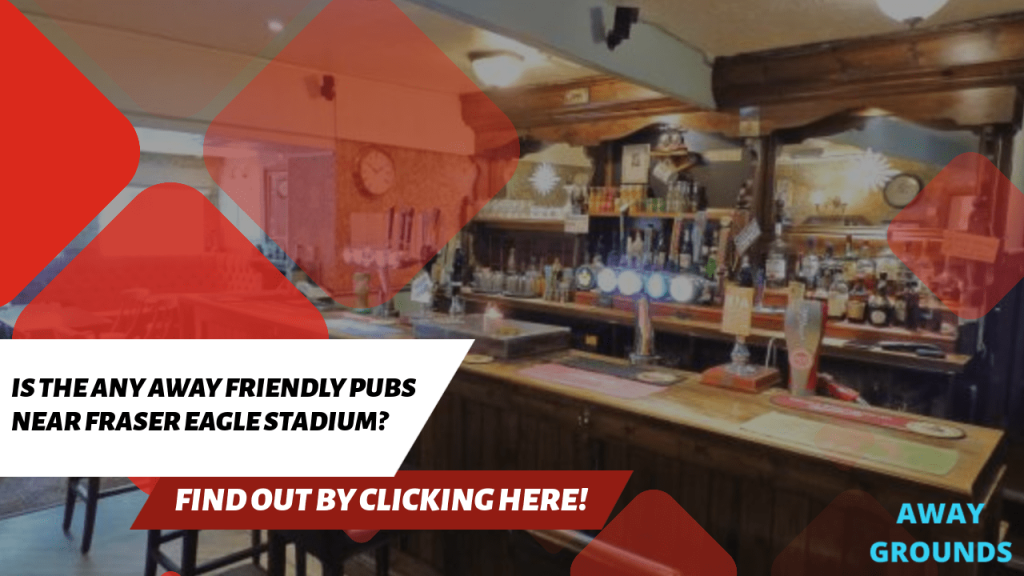 The Grey Horse is just a stone’s throw away from the Fraser Eagle Stadium but early arrival is advised as the pub does tend to get busy on match days. It is a Thwaites pub, recommended by CAMRA. Go from the ground to the main road and head towards the town centre. The pub is a short distance away, on the right.

Hotels near the Fraser Eagle Stadium

away fans accringtonThe majority of away fans have been bitterly disappointed by the Fraser Eagle Stadium, commenting that it is in need of substantial modernization. Many have complained that the open Coppice Terrace is always very cold and the facilities therein are very poor. Even the most vocal supporters have struggled to create any atmosphere in the away section. The toilets are reportedly old, dirty and flood regularly. 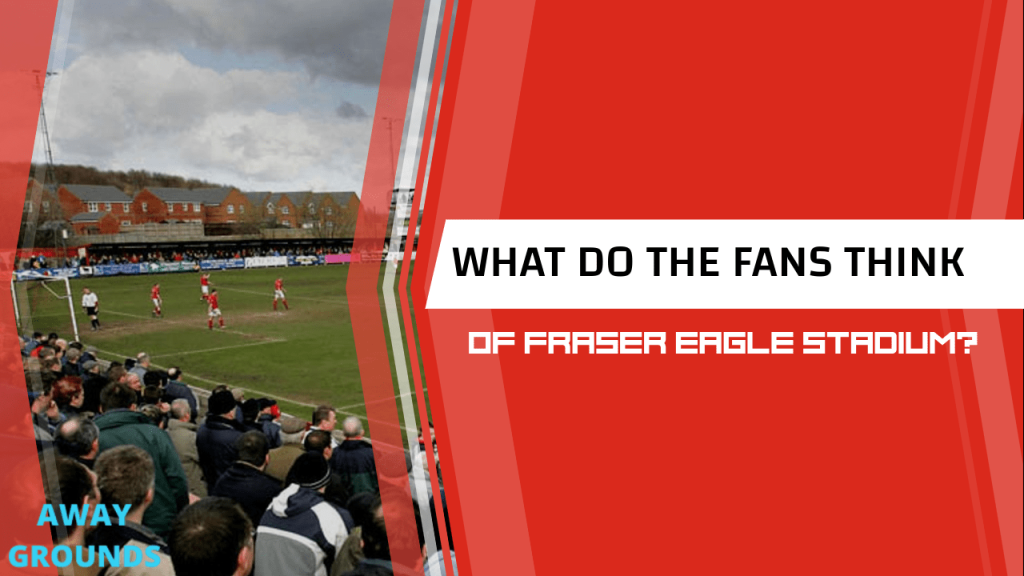 The burgers sold have been described as “excellent,” but this lead to long refreshment queues. The consensus seems to be that the Fraser Eagle Stadium could be a good day out, with friendly home fans and helpful stewards, but improvements are definitely needed.

Getting tickets for Accrington Stanley FC

Match tickets are available through the Wham Stadium ticket office, which is open Monday through Friday from 10 a.m. to 4 p.m.

Match tickets can also be purchased over the phone by calling the ticket office at 01254 356950.

This was not my first visit to the Wham Stadium. After a warm welcome, I had a most tasty 3-course dinner, served by friendly staff in a convivial atmosphere.

What is Accrington Stanley's ground called?

Which is the away end at Fraser Eagle Stadium?

When away fans visit the Fraser Eagle Stadium they will be located in the Coppice End.

What is Fraser Eagle Stadium away end capacity?

Away fans who visit Fraser Eagle Stadium are seated in the Coppice End which has a capacity of 1,800. 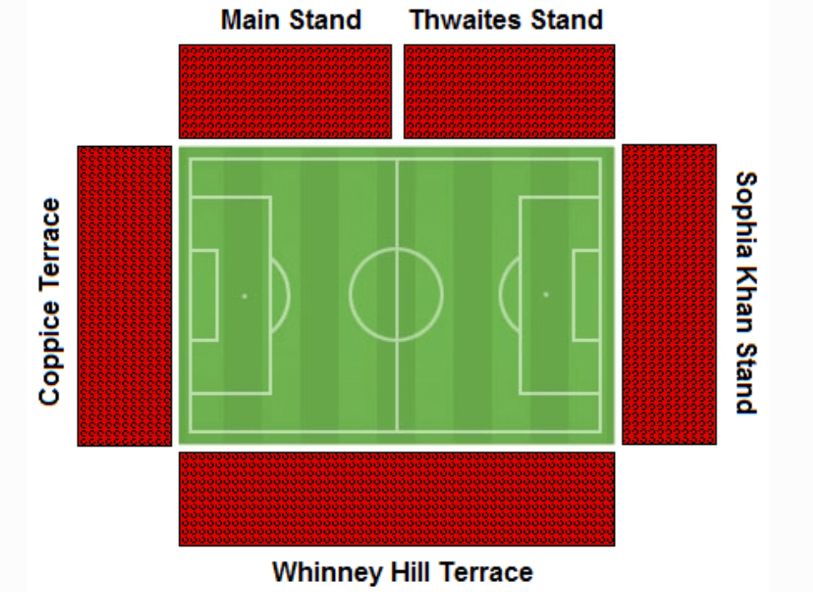 The Crown Ground, which was built and opened in 1968, has had a number of different titles over the years due to sponsorship. In recent years, it has been known as Fraser Eagle Stadium and Interlink Express Stadium. Depending on whether teams have been promoted or demoted, it has also been the smallest venue in the Football League on several times.

Crown Ground, the stadium’s original name, has nothing to do with the British Crown or monarchy. It is, in reality, named after the nearby Crown Pub, which is far less auspicious. Every pound spent in the bar goes towards Accrington Stanley, which is now owned by the team.

With seating for up to 160 people, the Sports Bar at Crown Ground is sure to tick all of your boxes. They may provide any service you require, including a DJ, cake decorators, food, and even room dressing if requested.