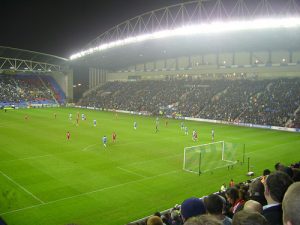 The DW Stadium is home to Wigan Athletic. Formerly known as The JJB Stadium it was completed in August 1999, at a build cost of £30 million, replacing Wigan’s previous Springfield Park ground, where they had played for close to 70 years.

It was renamed the DW Stadium in August 2009 after their chairman and benefactor Dave Whelan, following the collapse of JJB Sports, who the stadium was previously named after.

It is an all-seater arena with a capacity of 25,135, in four single-tier stands. The North Stand, behind the goal, is usually allocated to away fans, though if away support is small, visiting supporters may find the North Stand closed, with alternative seating offered.

The stadium also has facilities and access for up to 300 disabled fans, with facilities for partially sighted fans. The pitch contains a small amount of synthetic material for improved durability.

Find out more about the DW Stadium:

How to Get to the DW Stadium

The ways to get to the DW Stadium are:

The Wigan Athletic stadium address is:

Drivers arriving from the North should exit the M6 at junction 27, turning left at the end of the slip road. Turn right at the T-junction (signed “Shevington”) and turn left after about a mile into Old Lane (signed “B5375 Standish Lower-Ground”). Follow this winding country road for 2 miles. At the traffic lights, turn right into Scot Lane and first left into Stadium Way and the DW Stadium address.

Away fans arriving from the South should exit the M6 at junction 25, turning left at the end of the slip road onto the A49 towards Wigan. Take the 2nd exit at the roundabout, continuing on the A49 for just over a mile, to the Saddle roundabout. Take the first exit (signed “Standish A49”) into Robin Park Road, passing the Asda superstore. Follow signage for the JJB stadium. The map below can provide driving directions from all UK locations and is useful for finding car parking facilities and suitable pubs near the DW Stadium.

The DW stadium postcode is WN5 0UZ for your postcode.

Wigan’s North Western & Wallgate stations are virtually opposite each other. Both are a 30-minute walk to the stadium, and many visiting fans suggest a bus or taxi to the ground. The No. 600 bus runs to the Robin Park roundabout, which is within a 5-10 minute walk of the ground. 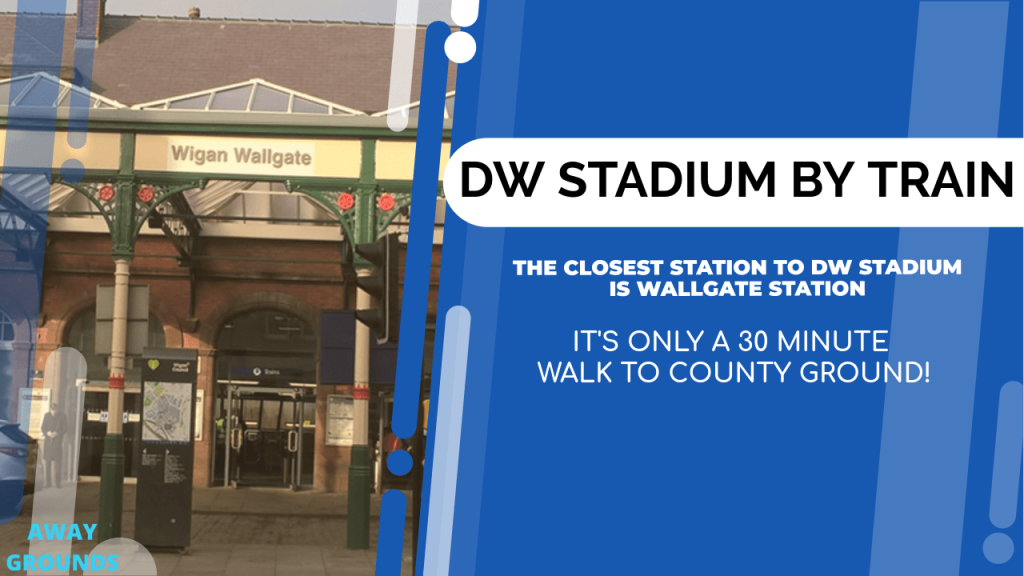 On exiting the station, turn left from Wigan North Western station and right from Wallgate station, proceeding under the railway bridge. Follow Robin Park Road as far as the Seven Stars hotel (the stadium is visible), turn right and right again to reach the ground. Click here to check the current train timetables

Manchester International is the nearest airport to the JJB Stadium, at a distance of some 25 miles. There are frequent, direct train connections from the airport to both of Wigan’s main stations, with a journey time of about 75 minutes. Visiting fans should use Wigan North Western station for the return trip to the airport. Click here to check the current flight times

There are several taxi companies in Wigan that can take you to and from the DW stadium. You can always prebook a private hire taxi, or hail a black cab on any highway.

Calling all Wigan Taxi Companies – Why not advertise your company here?.

Where to Park at the DW Stadium?

Visiting supporters must resist the temptation to park in the nearby Robin Retail Park, B & Q and Asda car parks. Numerous fans have reported getting parking tickets or having their vehicles clamped in these areas. The DW Stadium has 3 public car parks (Car Parks 2 and 5 are reserved), which provide ample parking. 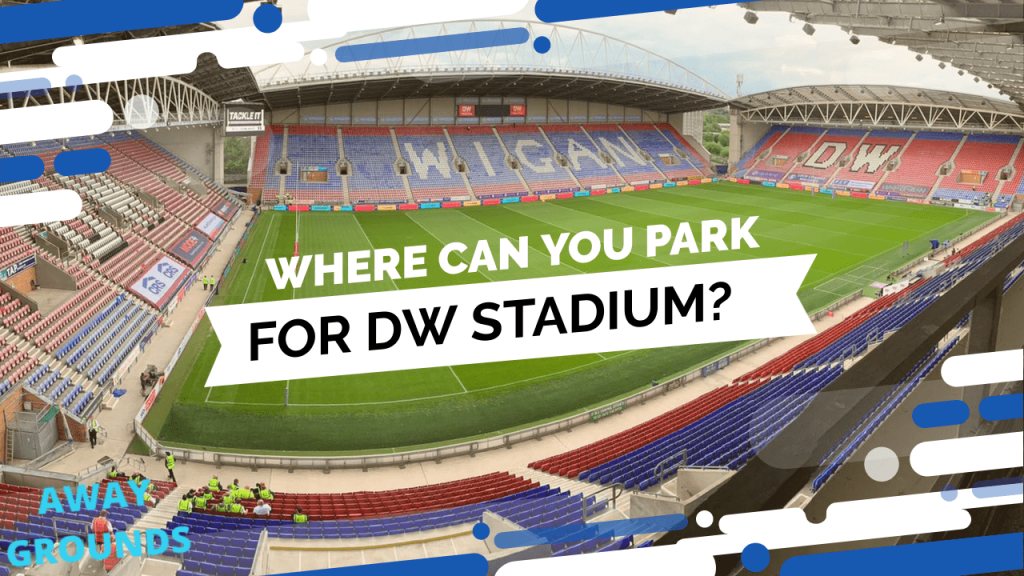 Car Park 4, accessed via Frith Street, next to B & Q, is free, but fills early and is generally closed an hour before kick-off. Car Parks 1 (Visitors) and 3 (behind the East Stand) provide reasonably priced parking. However, there are inevitably delays in exiting the on-site car parks, particularly if the crowd is large.

Away Friendly Pubs near the DW Stadium

Many visiting fans have reported that The Swan & Railway, opposite the Wigan North Western station, is a “home only” pub, best avoided by visitors. Also in Wigan town centre, The Anvil, next to the bus station, has received several recommendations from away supporters. The Moon Under Water is also popular with visiting fans. 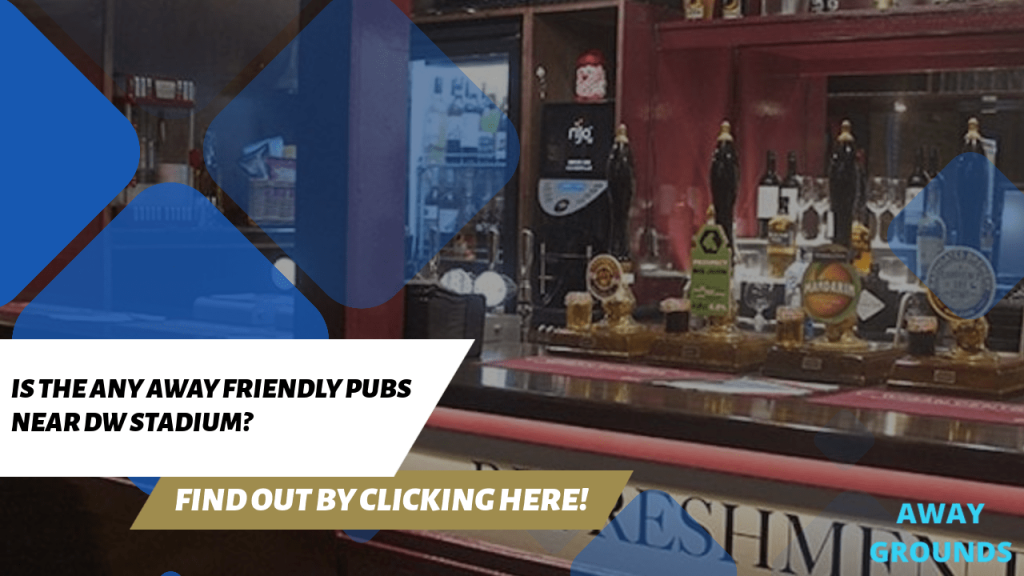 For those energetic to make the 30-minute walk to the ground, there are a couple of recommended watering holes en route. The Orrell, at Wigan pier, is reported to offer a friendly welcome, whilst offering a good range of beers and food. The Jacobs Well Pub, in the same area, is also recommended. The “traditional” pub for away fans is the Red Robin, just a few minutes walk away from the ground, opposite the Cinema Complex. Inside the ground, the Marquee Bar is reserved for away fans.

Hotels near the DW Stadium

The 3-star Britannia Hotel, Almond Brook Road, Standish, Wigan WN6 0SR provides value for money accommodation in a quiet location near junction 27 of the M6, about 3 miles from the DW. Guests have remarked upon modern facilities including an air-conditioned gym and indoor swimming pool. Additionally, ample free parking is provided.

What have other Away Fans said about their trip to the DW Stadium?

Most visiting fans appear to have enjoyed visiting the DW Stadium, though certain aspects of the ground have received mixed reviews. Away supporters have been almost universally impressed by the modern looks of the ground. The North Stand has received many plaudits, with excellent views of the play, no supporting pillars and ample legroom. 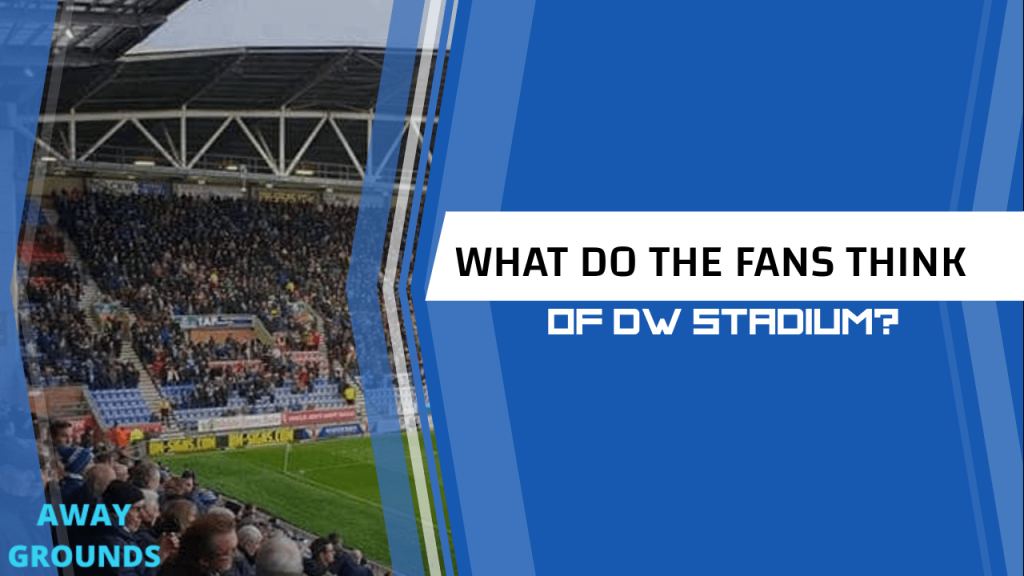 The atmosphere within the ground appears to vary greatly from match to match, with some visitors reporting it as excellent, while others were disappointed. Catering facilities have generally received good reviews, with fans experiencing no problems in getting good quality food and drink inside the ground, on even the busiest days. However, some visitors have commented on the long queues and poor quality of food available.

Which is the away end at DW Stadium?

Away fans at DW Stadium can be seen at the North Stand, which is positioned at one end of the stadium.

What is DW Stadium away end capacity?

Up to 4,800 fans can be accommodated in the away stand at DW Stadium.