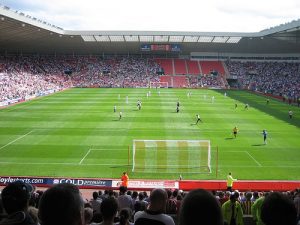 Following the publication of the final Taylor Report in 1990, Sunderland needed to convert Roker Park, their home for nearly 100 years, into an all-seater stadium.

As it was enclosed by residential areas, expansion was impossible and relocation was necessary. The site of the new stadium, on the North bank of the River Wear is close to Roker Park and the city centre.

With an initial build cost of £15 million, construction began in June 1996. The capacity was revised twice and the 42,000 all seater stadium was completed in 1997. The name eventually adopted was the Stadium of Light, reflecting the stadium being built on the site of the former Wearmouth Colliery.

A £7 million extension of The North Stand in 2000 increased capacity to 49,000, making the final build cost some £24 million. The stadium’s design allows possible expansion to produce a capacity of 63,000, though there are no immediate plans. The East Stand has the Sunderland emblem on the seats, while the North Stand has the slogan “Ha’way The Lads.” The stadium also has a Davy lamp monument, and a statue of 1973 FA Cup winning manager Bob Stokoe. Away fans are seated behind the goal, in the west half of the South Stand.

How to get to the Stadium of Light

For satnav purposes, the address of the ground is Stadium of Light, Sunderland SR5 1SU.

Drivers arriving from both North and South should exit the A1 at junction 62, following the A690 for Sunderland. After 8 miles, turn left at the roundabout onto the A19, signed “Tyne Tunnel.” Remain in the left lane, taking the second slip road, signed Stadium of Light / A1231 / Sunderland. Cross the Wear Bridge, turning right onto the A1231, following signage for Sunderland. Go straight on at the next 4 roundabouts. On passing through 2 sets of lights (taking the left lane at the second set) the stadium car park is situated on the right after about a mile.

Sunderland train station, in the city centre is a 15-minute walk from the ground. On exiting the station, turn left into High Street West and left again into Fawcett Street. Cross the bridge and turn left into Millennium Way. 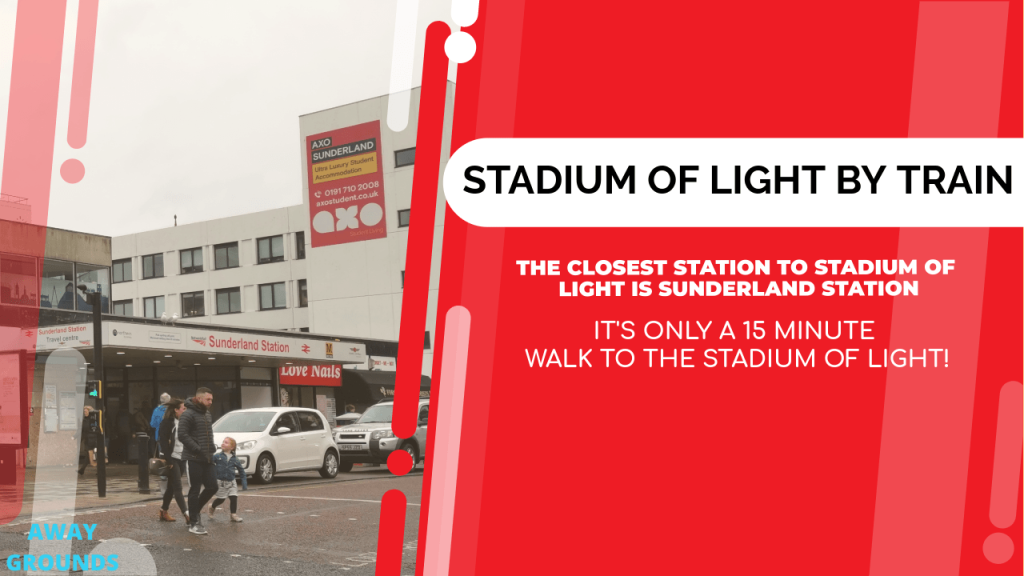 The away turnstiles are straight ahead. The “Stadium of Light” and “St. Peters” Metro stations both serve the stadium. Away supporters should alight at St. Peters, nearer the away end. N.B. Numerous fans have been caught out by the fact that after the match, only Northbound (towards Newcastle) trains can be caught at the Stadium of Light station, while St. Peters only operates Southbound (towards Sunderland centre). Click here to check the current train timetables.

The nearest airport is Newcastle, some 24 miles away. The journey is straightforward as both the Stadium Of Light and Newcastle Airport are both served by the Metro system, with frequent connections. Journey time is about an hour. Click here to check the current flight times

There are several taxi companies in Sunderland that can take you to and from the stadium. You can always prebook a private hire taxi, or hail a black cab on any highway.

Calling all Sunderland Taxi Companies – Why not advertise your company here?.

Parking is limited at the ground, and most fans recommend parking in the city centre, which is only a 15-minute walk away. A free “Park & Ride” scheme operates on match days. 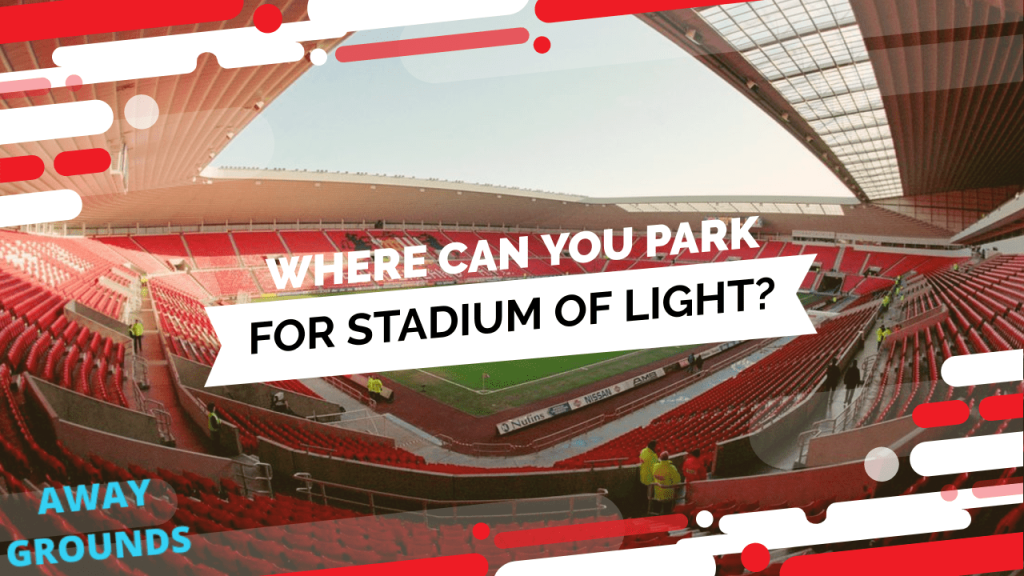 This is situated at Sunderland Enterprise Park, which is well signposted just off the A1231 (see “By Road,” above). Buses run every five minutes, for 90 minutes prior to kick-off and for as long as necessary following the game.

Away Friendly Pubs near the Stadium of Light

For early arrivals, many fans have recommended the Harbour View on the seafront, some 20 minutes from the ground. Serving real ales and excellent food, this pub also offers a large screen TV. In the town centre, the William Jameson and the opposite Yates’ bar have both been noted for an excellent atmosphere. 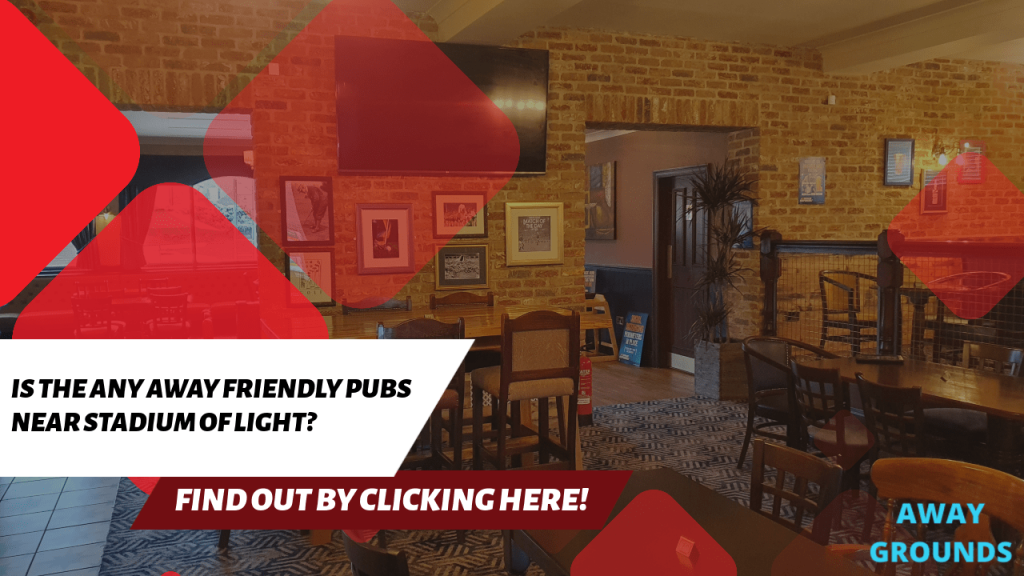 A little closer to the stadium (a 5-minute walk), The Sunderland Companions’ Club and The Democratic Club, on the stadium side of the river, near Wearmouth Bridge, both offer a warm welcome to away fans, but become very crowded. The Albion, on Victor Street has also been noted for its consistently friendly welcome. Nearby parking is available. Alcohol is on sale inside the ground but bars become uncomfortably overcrowded.

Hotels near the Stadium of Light

The Washington Premier Inn, Emerson Road, Newcastle, NE37 1LB, just over 5 miles from the Stadium of Light is an ideal choice for drivers, located just off the A1. Guests have been impressed by the facilities on offer, with the “Eat as much as you like” breakfast particularly popular.

What have other Away Fans said about their trip to the Stadium of Light?

The vast majority of visiting fans have been extremely impressed with the Stadium of Light, noting it as one of the better Premiership grounds. Most have been pleasantly surprised at the friendly welcome they received from the home fans. 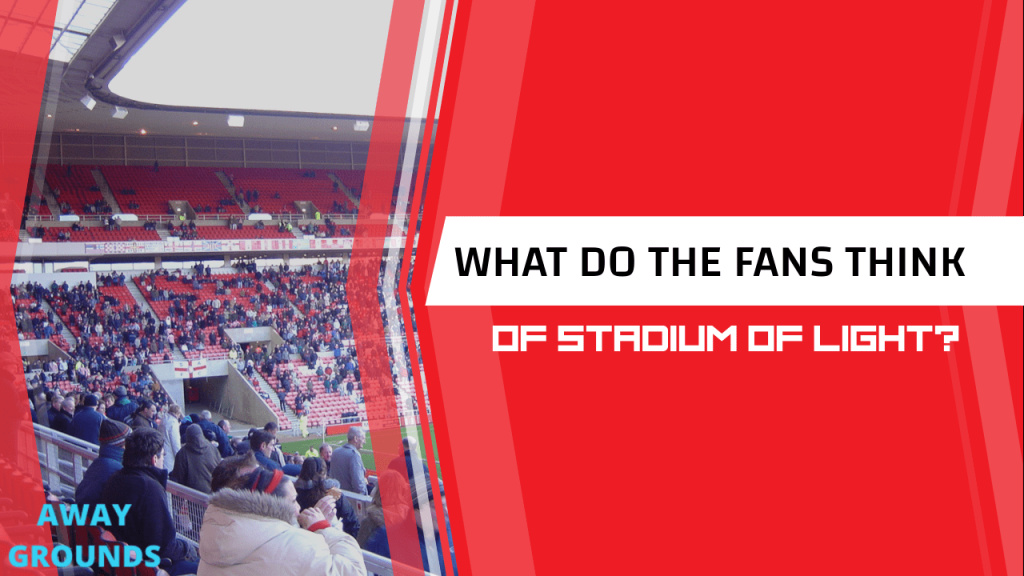 One recurring disappointment is the rather “hit or miss” atmosphere within the ground, which can be very quiet on occasions, and deafening on others. Overly strict stewarding has been a constant cause of complaint, with visiting fans ejected from the ground for minor “offences.”

Which is the away end at Stadium of Light?

While visiting the Stadium of Light away fans currently sit in the Upper Tier of the North Stand, behind the goal.

What is Stadium of Light away end capacity?

The Sunderland away allocation is around 3,000 fans.

As a big Chelsea fan, I love to travel to watch my beloved Blues. Travelling all over the UK I have visited every single Premier League Stadium so a vast array of knowledge for football away days guide information. I regularly tip a Lucky 15 first goalscorer bet and Acca bet each weekend. We have US followers but I will not be using the term "Soccer".