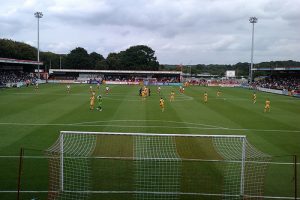 The Lamex Stadium has been the home ground of the recently renamed Stevenage FC since 1980. The ground has a capacity of 7,100, with seating for 3,142. Formerly known as Broadhall Way (and still referred to as such by many fans) the stadium was renamed because of a lucrative sponsorship deal signed with the Lamex Food Group in early 2009.

Although generally modern, the ground retains plenty of character. On the west side is the all-seater, single tier, covered Main Stand. Opposite is the sizeable, covered East Terrace, which is quite steep in nature. Although, in keeping with the remainder of the ground which is relatively new, a gabled roof with a clock opposite the halfway line maintains some historic character. Behind the goal, at the north end of the ground, is a small terrace that is predominantly covered, although there is an open area to one side. At the opposite end of the ground is the Buildbase South Stand, an all-seater, single tier, fully covered stand. Opened in 2001, this stand is allocated to away fans. It has an electronic scoreboard on its roof. With Stevenage securing promotion to Football League Two as Conference champions in 2009-10, the Lamex Stadium hosted League football for the first time in the 2010-11 season.

How to Get to the Lamex Stadium

The nearest railway station is Stevenage, approximately a mile from the ground. Click here to check the current train timetables. On exiting the station, turn left towards the town centre. Climb the steps before the bridge over the dual carriageway and head along Lytton Way. At the 1st roundabout (police station on right), take the 2nd exit into Six Hills Way. 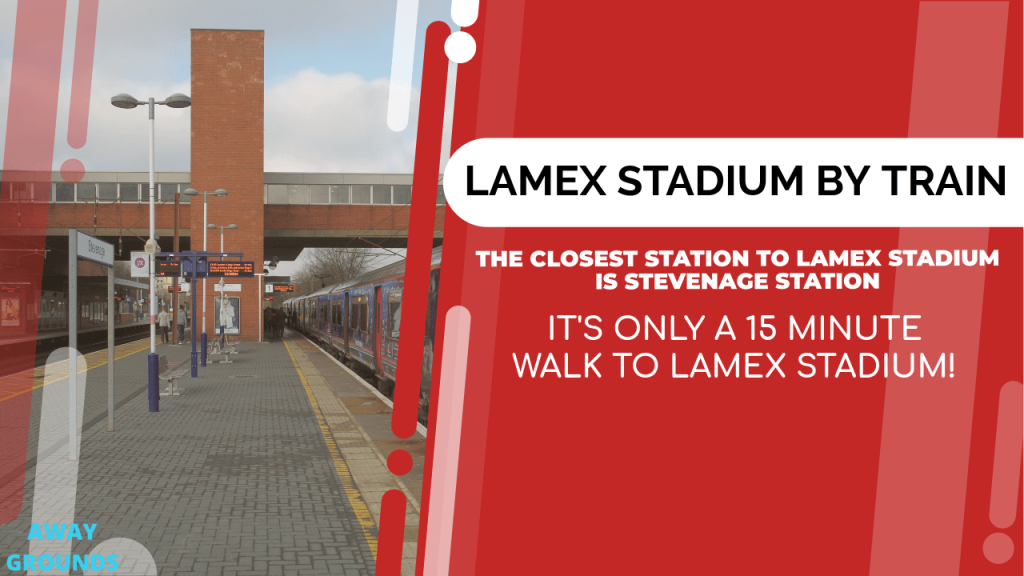 At the next, take the 3rd exit onto Monkswood Way. Continue along the A602 and after about three quarters of a mile, the stadium is visible on the opposite side of the road. Alternatively, the no. 4 bus runs regularly from the station to the ground and inexpensive taxis are available.

The nearest airport is Luton, at a distance of about 7 miles (11. 3 km). Click here to check the current flight times

There are several taxi companies in Stevenage that can take you to and from the Lamex Stadium. You can always prebook a private hire taxi, or hail a black cab on any highway.

Calling all Stevenage Taxi Companies – Why not advertise your company here?.

There is a large (1500+ capacity) free car park adjacent to the ground. 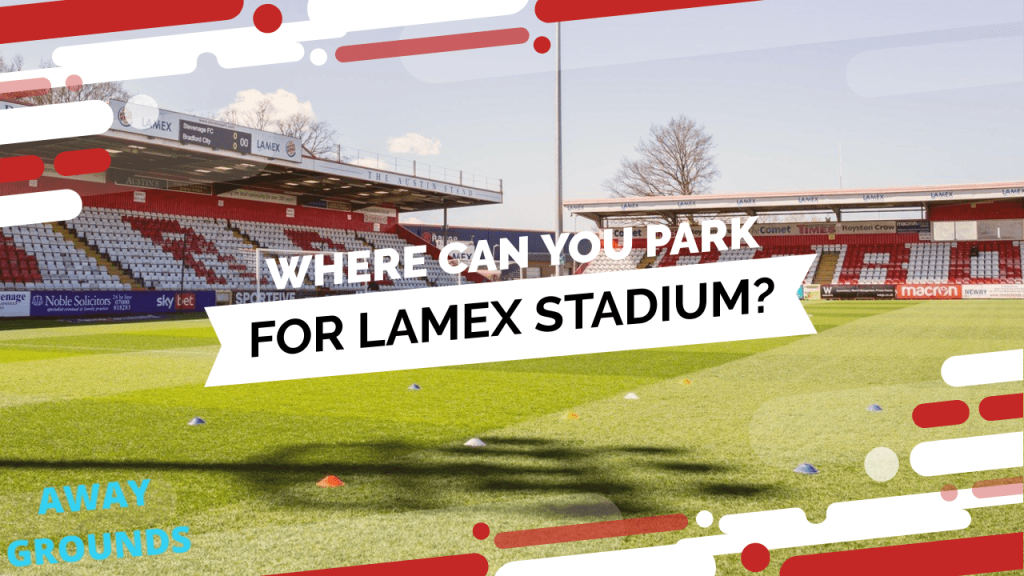 Away Friendly Pubs Near the Lamex Stadium

The Clubhouse, behind the South Stand has proved popular with both home and away supporters. However, with Stevenage’s promotion to League Two of the Football League, there is some uncertainty as to whether it will remain available to away fans. 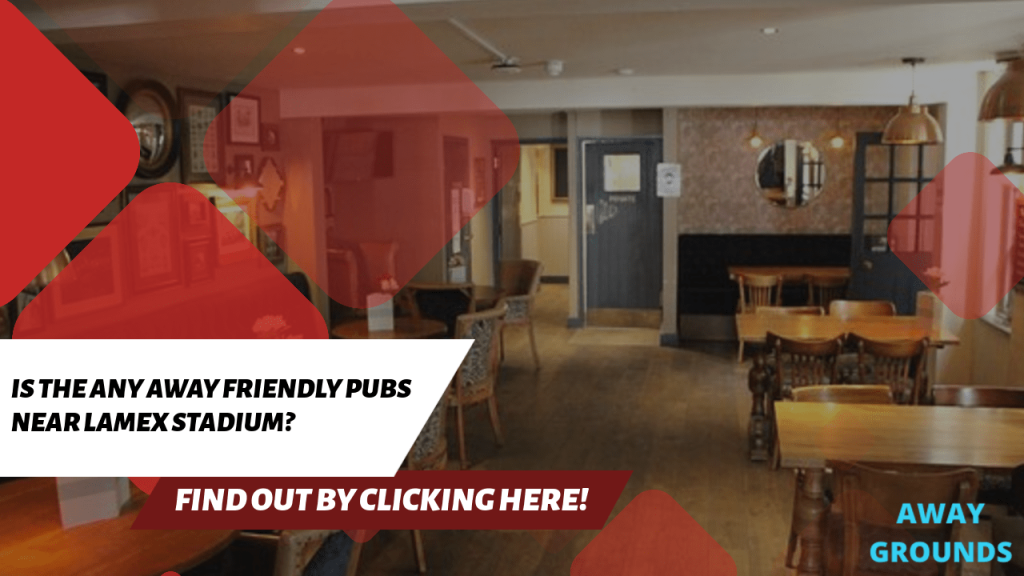 There are few pubs close to the ground, but visitors advise that the majority of pubs in the town centre are “away friendly.” The Mutual Friend and Old Forge pubs have also been the subject of good reports. En route to the town centre, these pubs are on the roads that pass either side of the stadium.

Hotels Near the Lamex Stadium

The Express by Holiday Inn Stevenage, Danestrete, Stevenage, SG1 1XB is a modern hotel, located near junction 7 of the A1(M). It is within a few hundred yards of Stevenage railway station, offering a total journey time to central London of about half an hour. All the hotel’s spacious, air-conditioned, en suite rooms offer a power shower and satellite TV. The lounge bar has a large TV with Sky Sports on offer. Free overnight parking is available in the nearby Matalan car park, although a voucher from the hotel reception will be required.

What Have Other Away Fans Said About the Lamex Stadium?

From the limited ground reviews available, it appears that the majority of fans have thoroughly enjoyed their trip to the Lamex Stadium. Several visitors have remarked upon the ease with which the ground was located, with clear signposting from the A1(M). The nearby Retail Park has proved popular with visiting fans, with various outlets offering reasonably priced food. The Clubhouse at the ground (see above) has proved popular with away fans, offering reasonably priced beer, along with a large screen TV and several smaller screens for early games. 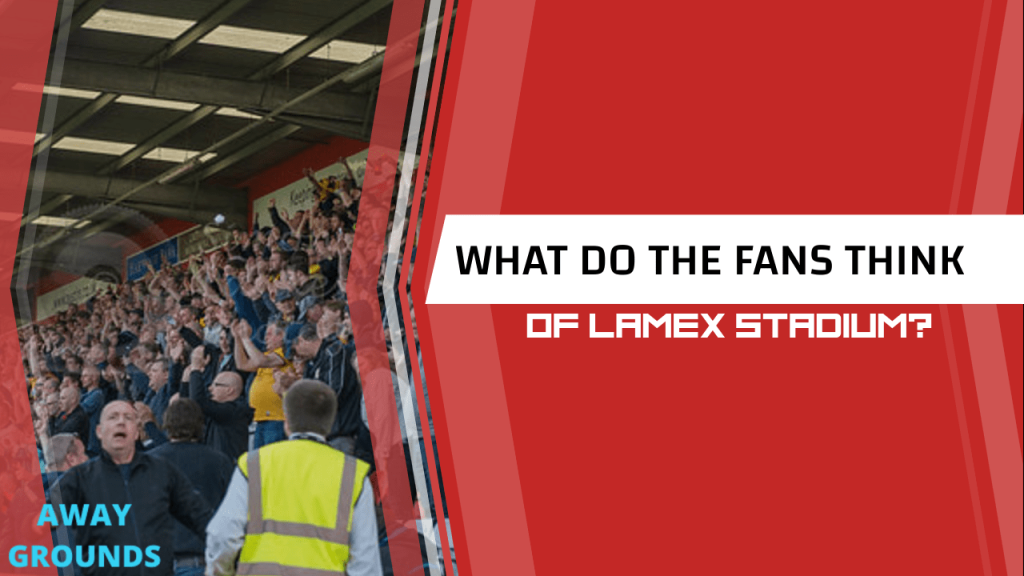 Within the ground itself, the overall atmosphere is described as good, with friendly banter with the home supporters. Toilet facilities have been described as adequate. Visitors have reported few problems in making a quick getaway from the club car park. On the downside, the food offered inside the ground is expensive and of poor quality. Furthermore, overzealous stewards have detracted from several fans’ enjoyment of their trip to the Lamex Stadium.

Which is the away end at Lamex Stadium?

Away fans are housed in the South Stand, which is located at one end of the Lamex Stadium.

What is Lamex Stadium away end capacity?

The capacity at the Lamex Stadium for away fans is 1,400 although this can be increased to about 2,000.