The Millennium Stadium is the national stadium of Wales, and is the home of the Wales national football and rugby union teams.

Opened in 1999, the £130 million all-seater stadium has the capacity for 74,500 supporters. It features a retractable roof, only the second stadium of its type in Europe, and the largest such stadium in the world with this feature.

The pitch comprises a modular “GreenTech” system, with the turf laid on several thousand pallets, allowing it to be removed when the stadium is used for concerts and other events.

The four ends of the ground are called the North Stand, the West Stand, the South Stand and the BT Stand (east). The stadium has 3 tiers of seating with the exception of the North Stand, which has 2 tiers, as it backs onto the adjoining Cardiff Rugby Club.

How to get to the Millennium Stadium

It is well signposted in and around the centre of Cardiff. Drivers arriving from the West should exit the M4 at junction 33, following “City Centre” signage from the eastbound A4232. From the East, exit the M4 at junction 28, joining the A48 and following “City Centre” signage. From the North, exit the M4 at junction 32, heading towards the city centre. Pass over the North Road flyover and at the end of North Road, bear right into Castle Street. Cardiff Castle is on the right. At the 2nd set of lights, turn left into Westgate Street and the stadium is about 200 yards on the right. It should be noted that traffic restrictions operate around the ground for several hours prior to kick off (see Where to Park? below).

Cardiff Central railway station is only a 5-minute walk from the ground. 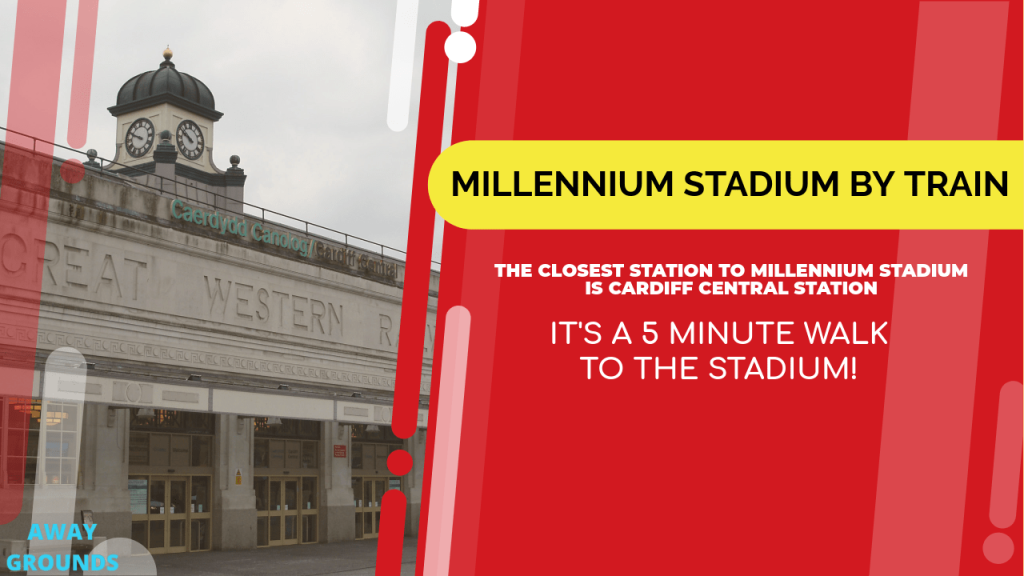 On exiting the station at its main entrance, bear left into Wood Street for gates 5, 6 and 7, or go straight on into Westgate Street for gates 2, 3, and 4, continuing around the ground for gate 1 in Castle Street. Click here to check the current train timetables

Cardiff International airport is about 10 miles from the ground. Regular rail and bus links are available to Cardiff Central station, with a journey time of about 35 minutes. Click here to check the current flight times

There are several taxi companies in Cardiff that can take you to and from the Millennium Stadium. You can always prebook a private hire taxi, or hail a black cab on any highway.

Calling all Cardiff Taxi Companies – Why not advertise your company here?.

There are no parking facilities for the general public at the Millennium Stadium. However, “Park and Ride” schemes operate from junctions 29, 30, 32 and 33 of the M4. Electronic signs on the motorway advise which exit to take. 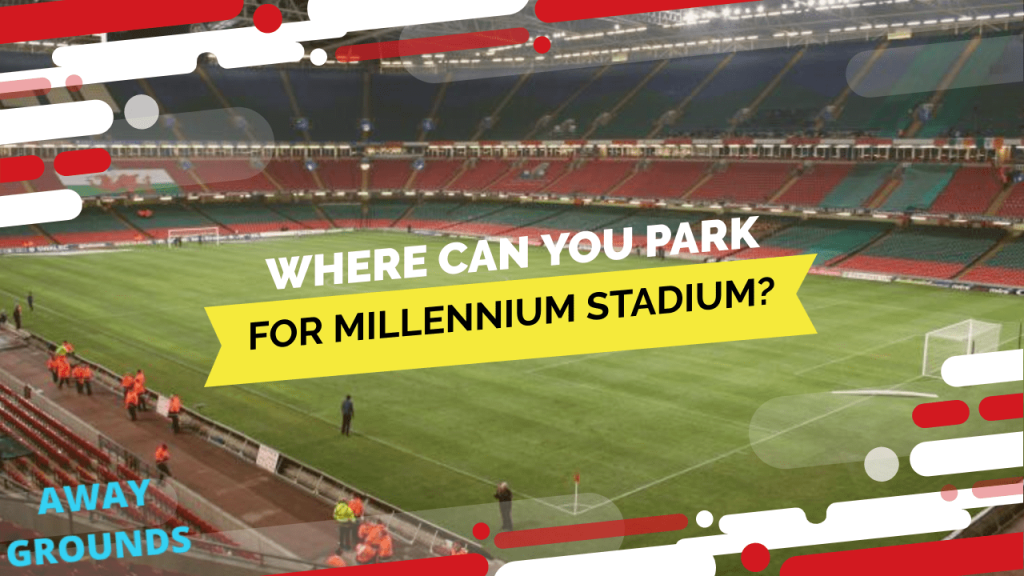 Visiting fans advise that there is great traffic congestion on the M4 and lengthy waits to get back to the car parks following the game. Some visitors have advised driving as far as Newport station, where nearby, reasonably priced parking is available and taking a 15-minute train ride to Cardiff Central station.

Pubs near the Millennium Stadium

The location of the Millennium Stadium, in the centre of Cardiff, means that there are plenty of pubs and bars from which to choose. There are reportedly 70+ outlets within a ¼ mile radius of the ground. At the South end of the stadium, St. Mary’s Street offers a range of good pubs.

Those which have received particularly good reviews are the Prince of Wales (a former theatre), the Albert, adjacent to the Brains brewery, and the Cottage. These are all very busy on match days and early arrival is advised. 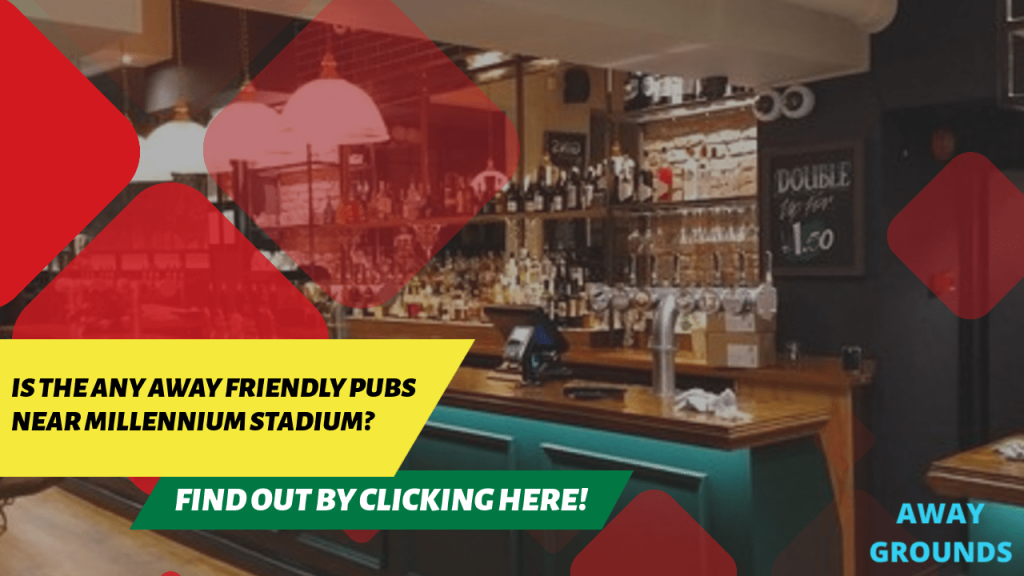 At the North end, the City Arms, a Brains pub opposite gates 2 and 3, offers good beer and large-screen Sky Sports. The Owain Glyndwr, in St. John’s Square, near the market, has also been recommended. Alcohol is also available from 23 bars inside the stadium, though drinks may not be taken into seating areas.

Hotels near the Millennium Stadium

As you’ll see from the Street View image above, the Holiday Inn City Centre is pretty much adjacent to the Millennium Stadium, and well positioned for exploring Cardiff Castle and the city centre. Previous guests have commented on the excellent location, wiht many even enjoying views of the castle from their rooms!

What have other Fans said about their trip?

Few visitors to the Millennium Stadium have failed to be impressed, with many visiting fans making favourable comparisons with the new Wembley Stadium. Facilities are reportedly excellent, with plenty of legroom and height between rows, ensuring good views of the play. Concourses are wide and roomy and there are plenty of toilets and food / drink outlets, ensuring minimal queuing. Several fans have been surprised that despite the size of the stadium, it gives the feel of being close to the action. 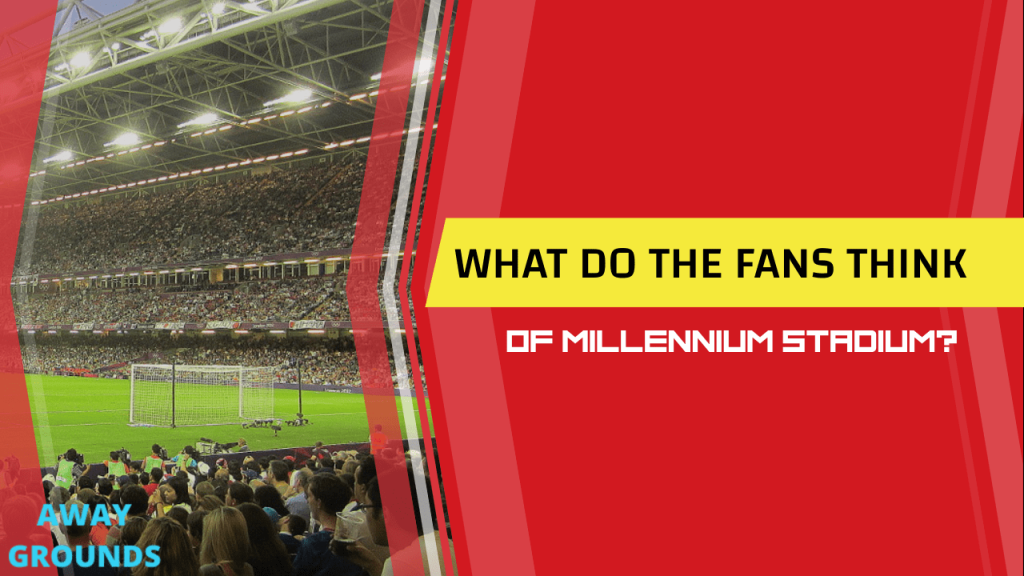 The acoustics within the ground are reportedly very, very good, allowing a vibrant atmosphere to be created. Fans that have experienced games with the roof closed report that it completely changes the ambience of the stadium and boosts the atmosphere. With helpful stewards and relaxed policing, most fans have described their trip to the Millennium Stadium as a great day out.

The Millennium Stadium, often known as Principality Stadium, is Wales’ national stadium and the third-largest stadium in the United Kingdom.

The stadium was built to host the 1999 Rugby World Cup final and to replace Wales’ old national stadium, Cardiff Arms Park, which had become seriously antiquated and lacked the facilities to host such a final at the time.

The stadium’s construction began in 1997 and was finished in 1999 for a total cost of £114 million. The stadium hosted its debut contest, a rugby friendly between Wales and South Africa. In March 2000, a friendly match between the Welsh and Finnish national teams took place.

The FA Cup and League Cup finals, as well as the FA Community Shield, were held at the Millennium Stadium while Wembley Stadium was being rebuilt.

The stadium was the standard playing venue for the Welsh national team for the first decade of its existence, but with declining attendances and smaller modern alternatives such as the Liberty Stadium and Cardiff City Stadium, the Welsh team has since played most of its matches at one of these smaller stadiums.

Following a naming rights sponsorship arrangement, the stadium was renamed Principality Stadium in 2016.

The Champions League final between Real Madrid and Juventus was held in the Millennium Stadium in 2017. (4-1).

The stadium’s roof is fully retractable and can be opened in 20 minutes. It is supported by four 90-meter-high masts.

The home dressing room, press conference suite, players tunnel, VIP suites, and President’s Box are all available for tours at the Millennium Stadium. The trips are 60 to 75 minutes long.

Tours are available seven days a week, seven times a day. Days and timings can be found on the online booking form.

Getting tickets for Millennium Stadium

Many events are held at Millennium Stadium such as football games and concerts. Getting tickets for events like these can be tricky so we advise you to go through their official site by clicking here.

We attended the Wales v Australia test and the seating was great, the staff friendly and efficient and the food and drink service good. There were terrific (covered) views of the pitch from everywhere – definitely a fantastic experience.

No other rugby stadium atmosphere like it! Perfect central location close to transport links and within walking distance of hundreds of pubs, bars, restaurants and Cardiff Castle.

Why did the Millennium Stadium change its name?

The Millennium Stadium was renamed Principality Stadium on September 8, 2015, as part of a 10-year naming rights agreement with the Principality Building Society.

How many seats are in the Millennium stadium?

There are 74,500 seats in the Millennium Stadium.

What is Millennium Stadium away end capacity?

The away end capacity at Millennium Stadium is around 1,800.

Which is the away end at Millennium Stadium?

At Millennium Stadiumway fans visiting Cardiff City Stadium will find themselves at one of the stadium’s corners, between the Grange and Ninian Stands. 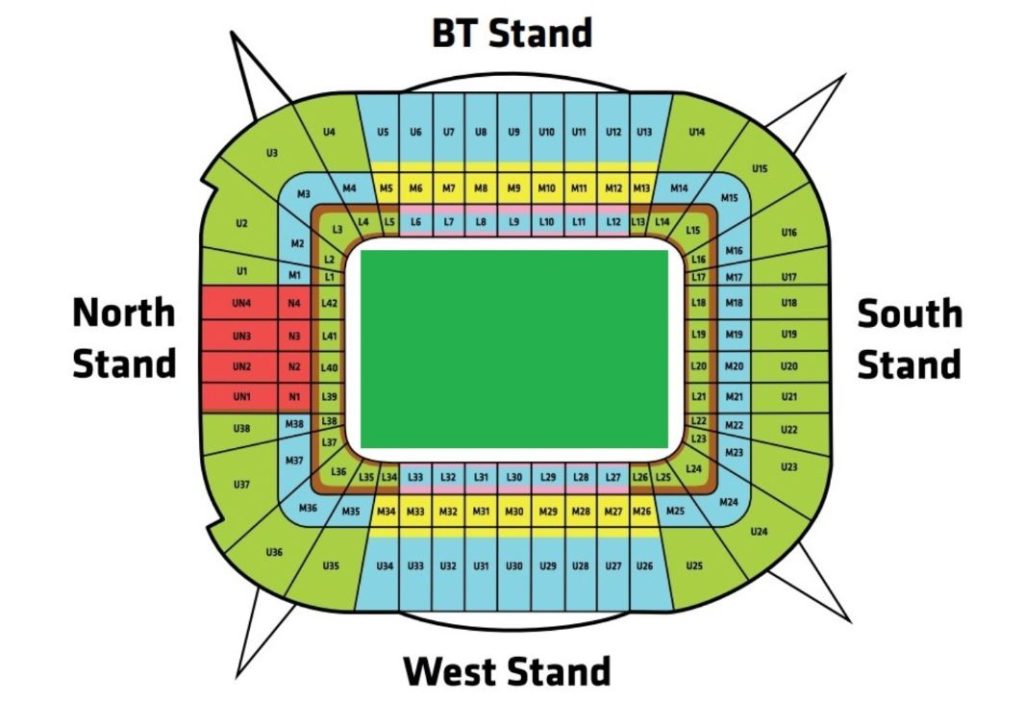 Millennium Stadium have previously hosted many concerts and sporting events before. If you are wanting to find out more about events they have coming up then click here.

Thank you for checking out this Millennium Stadium guide. We hope your team wins!