Blundell Park is an all-seater stadium with a capacity of 9,546. It is the home of Grimsby Town FC.

The ground, which opened in 1898, is the lowest football stadium in the UK, just 2 feet above sea level. On the West side of the ground is the two-tired Carlsberg Stand, which is the tallest stand in the ground.

It was opened in 1981, replacing the old Barrett Stand. The stand only runs half the length of the pitch, straddling the half way line. The upper tier is covered and the lower tier open, with corporate boxes between the two. The stand also houses the club shop and ticket office.

Opposite is the old Main Stand, which is small, covered stand and has a large number of supporting pillars running across the front of it. The central section of this stand dates back to 1901. The Main Stand houses the changing rooms and the players’ tunnel runs from its centre between the two sets of dugouts. Home fans are located in the Pontoon Stand at the North end, behind the goal. Built in 1961 and financed by Grimsby fans, the seats in this stand correspond to the club’s black and white colours.

Away fans are housed at the South end in the Osmond Stand, which was built in 1939. The club is hoping to relocate to a new ground on the western outskirts of Grimsby at Great Coates, adjacent to the A180 dual carriageway. Planning permission has been granted and if all goes to plan the new stadium will be ready for the 2010-11 season.

How to get to Blundell Park

Blundell Park is located in Cleethorpes, South Humberside. The postcode for your satnav is DN35 7PY.

Drivers from all routes should follow the roadsigns for Grimsby on the M180, which becomes the A180. This road runs right past the ground.

Cleethorpes railway station is about a mile and a 20-minute from the ground. On exiting the station, turn right and then left onto Station Road. At its end, turn right into High Street and follow it as far as the roundabout. 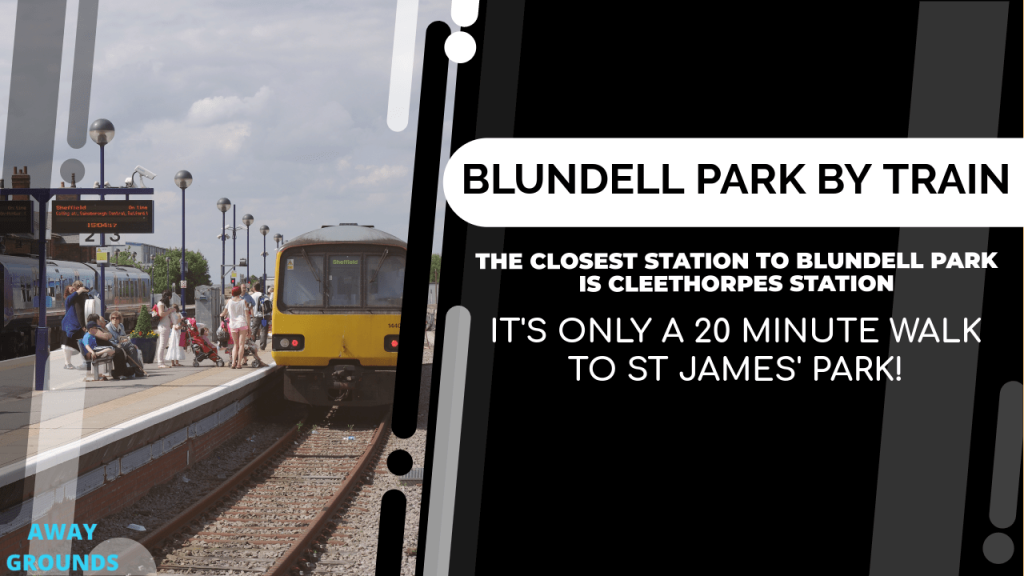 Turn right into Grimsby Road (A180) and after about ½ mile the ground’s floodlights become visible on the right. Turn right into Neville Street and left onto Harrington Street where the away entrance is on the left. Click here to check the current train timetables

The nearest airport is Humberside, at a distance of 12½ miles. There are regular trains to Cleethorpes from Barnetby station, which is about 3 miles from the airport. The rail journey from Barnetby to Cleethorpes takes just over an hour. Click here to check the current flight times

There are several taxi companies in Grimsby that can take you to and from Blundell Park. You can always prebook a private hire taxi, or hail a black cab on any highway.

Calling all Grimsby Taxi Companies – Why not advertise your company here?.

There is no car park at the ground. 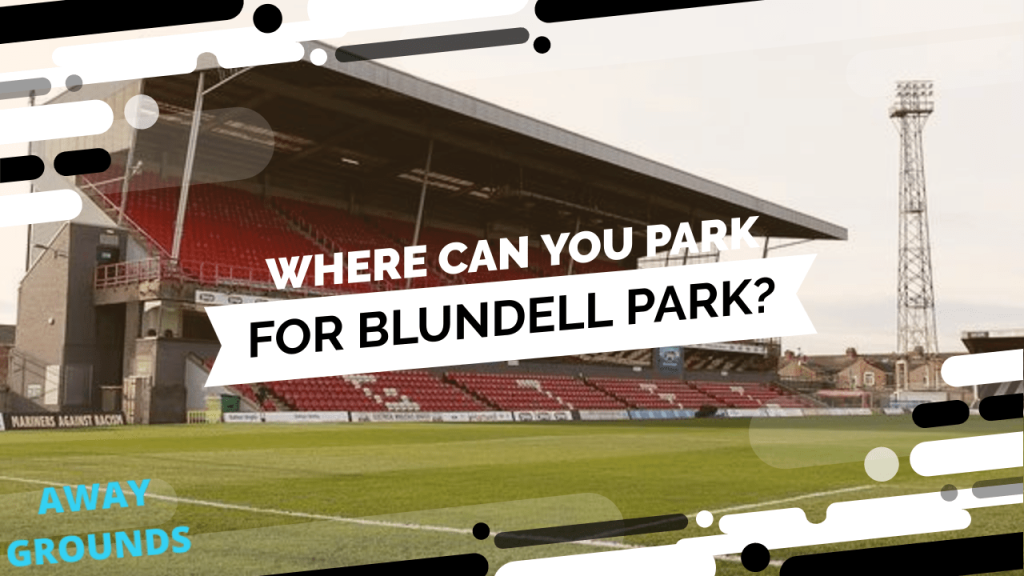 Having passed the ground on the A180, continue towards Cleethorpes and street parking is available in the side streets on both sides of the road.

Away Friendly Pubs near Blundell Park

Reports suggest that The Imperial pub near the ground is “one to avoid” for away fans. However, the Blundell Park Hotel, across the road from the ground, welcomes visiting supporters and serves reasonably price food. 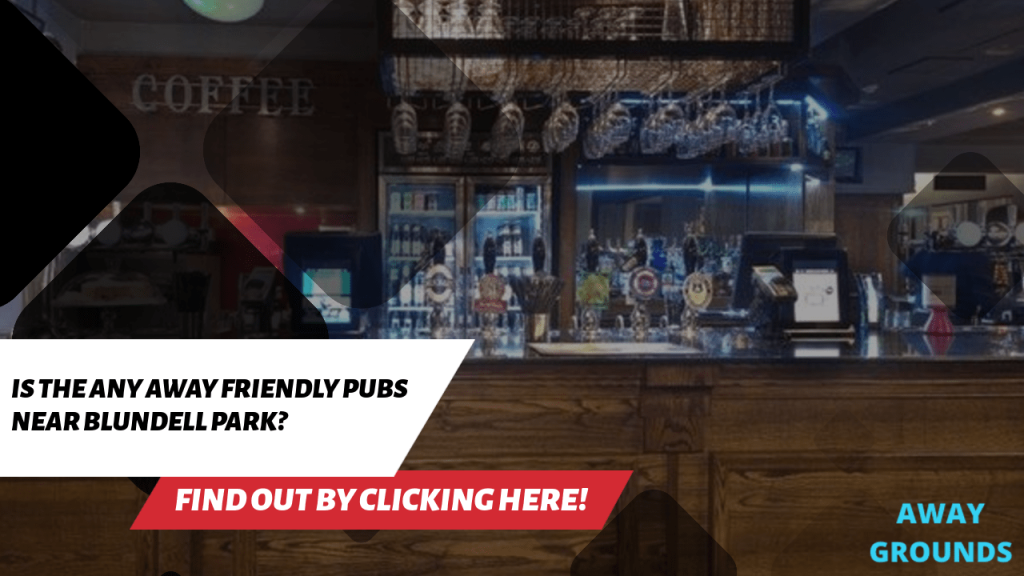 The Rutland Arms, off Cleethorpe Road, has been recommended, but is some distance from the ground and doesn’t allow in children. Just off the seafront on Highcliff Road is Willy’s Bar which is CAMRA-listed. Near the railway station, on Station Approach, the Number 2 Refreshment Room is also listed in the CAMRA Guide.

The Legacy Oaklands Country House Hotel, Barton Street, Laceby, Grimsby DN37 7LF is set on a private estate built in 1877, and nestles in 5 acres of beautiful Lincolnshire parkland. However, it is within 6 miles of Blundell Park. Spacious, en suite rooms come with a range of facilities and 24-hour room service. Guest reviews suggest helpful staff and excellent value for money.

The first thing several away fans have noted at Blundell Park is the biting, cold wind blowing off the North Sea. 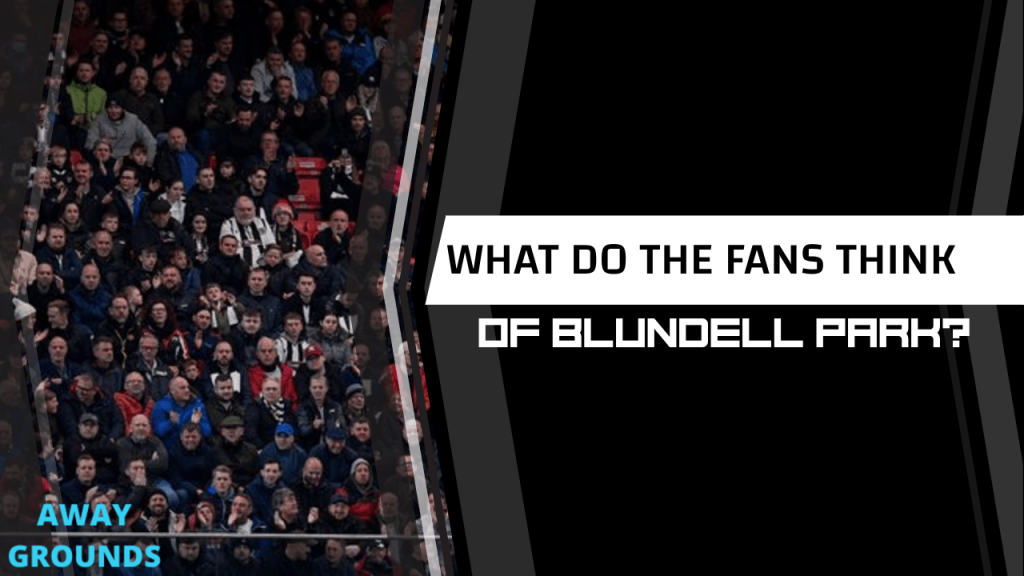 The ground is small, but the passionate home fans contribute to a good atmosphere with excellent vocal support for their team. Some fans have been a little disappointed by the view of play from the away section, which is impeded by numerous supporting pillars. The snack bar serves cheap, good quality food and the service is excellent. The stewards reportedly adopt a relaxed approach and the Grimsby fans are very friendly. Overall, fans describe a trip to Blundell Park as a very enjoyable day out.

Which is the away end at Blundell Park?

Away fans are housed in one corner of the Osmond Stand at Blundell Park.

What is Blundell Park away end capacity?

Just about 600 supporters may be accommodated in the away end at Blundell Park. For teams with a larger fan base, the entire stand can be given to away fans, bringing the total number of seats to 2,200.