One side of the ground is occupied by the old Grandstand. This all-seater, covered stand sits astride the halfway line, occupying about half the length of the pitch.

Opposite is the attractive, single-tiered Flybe Stand, with executive boxes at the rear. This stand replaced the former Cowshed terrace in 2001. The Big Bank Stand, a covered terrace, was open in early 2000, replacing a former open terrace.

The other end is the very small, open St James’ Road terrace, which houses away supporters. The neighbouring former St. James’ School building has been redeveloped into new offices, a social club and corporate hospitality/conference and banqueting facilities.

How to get to St James’ Park

Drivers arriving from the North should exit the M5 at junction 30, following signs for Middlemoor. Take the 2nd exit at the Middlemoor roundabout, signed Heavitree. Follow signs for City Centre, going through Heavitree (approx. 2 miles). Having passed the Police station on the right, at the roundabout at the bottom of the hill turn right into Western Way. At the next roundabout, take the 2nd exit into Old Tiverton Road and the 2nd left into Stadium Way.

The stadium is served by the St James’ Park railway station which is right next to the ground. 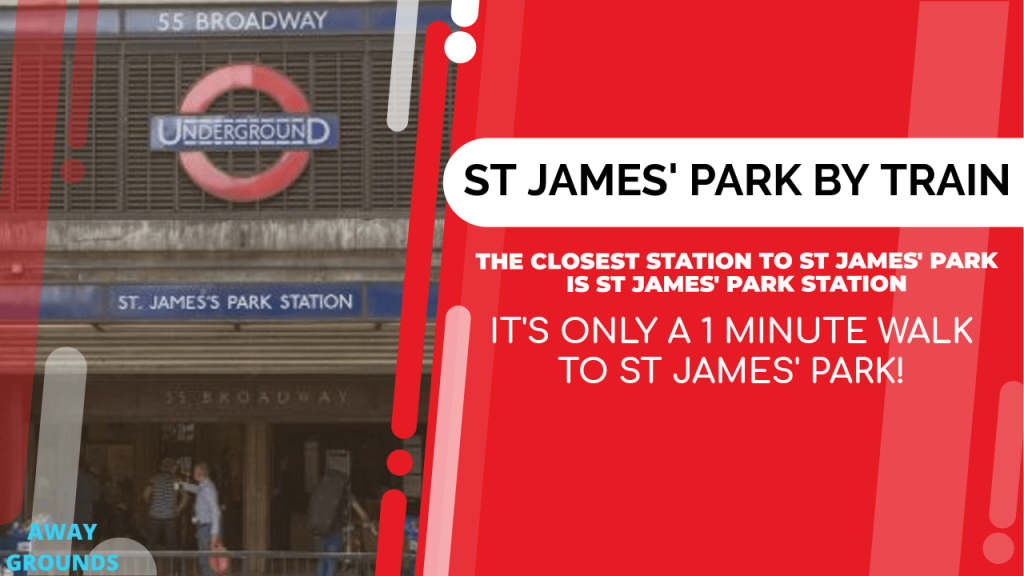 However, this station is on a local line and most rail passengers will arrive at Exeter Central or Exeter St David’s, from which a connection can be caught to St James’ Park. Otherwise, both stations are within comfortable walking distance of the ground. Click here to check the current train timetables

The nearest airport is Exeter, at a distance of 4½ miles. A taxi is probably the most convenient method of getting to St James’ Park. Click here to check the current flight times

There are several taxi companies in Exeter that can take you to and from St James Park. You can always prebook a private hire taxi, or hail a black cab on any highway.

Calling all Exeter Taxi Companies – Why not advertise your company here?.

A local residents’ parking scheme operates in the roads around the ground, so any street parking is likely to be a good distance from the ground. 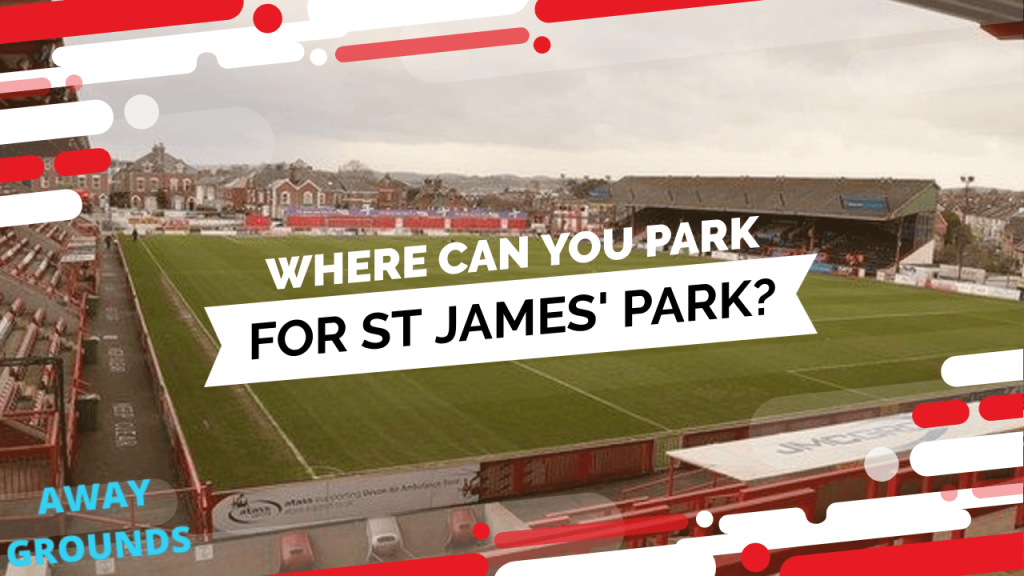 However, there are several car parks run by Exeter City Council within comfortable walking distance of St James’ Park.

The Social Club at the ground admits away fans. The CAMRA-listed Wells Tavern, about 50 yards from the stadium, offers a very friendly atmosphere, Sky Sports, good beers/ciders and an excellent beer garden. The Victoria Inn is a 15-minute walk along Victoria Street at the rear of the Grandstand. 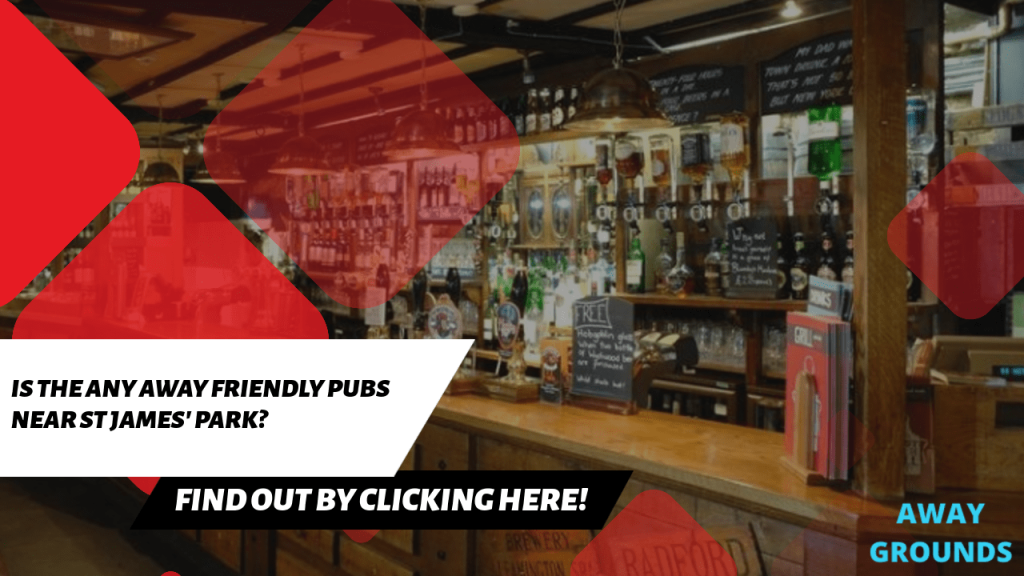 However, it is reportedly a great pub, with excellent, good value beer and food. It also offers free parking. The Bowling Green, about ¼ mile from the ground in Blackboy Road, is highly recommended by visiting fans. It is reportedly comfortable and airy, with an amicable blend of home and away fans.

Jurys Inn Exeter (pictured right), Western Way, Exeter EX1 2DB opened in June 2009, is only ½ mile from St James’ Park and a short taxi ride from Exeter St David’s railway station. It is also close to all the local attractions in Exeter. The limited guest reviews available suggest that this is a quiet hotel, with spacious, comfortable rooms and offers excellent value for money.

away fans exeterSeveral visitors to St James’ Park have been unimpressed by the “typical lower league” ground, particularly the St James’ terrace, which is reportedly bland and very cold. Away fans advise that the limited seating in the Grandstand is old, but is at least covered. The open nature of the terraced area also prevents away fans from generating much in the way of atmosphere. 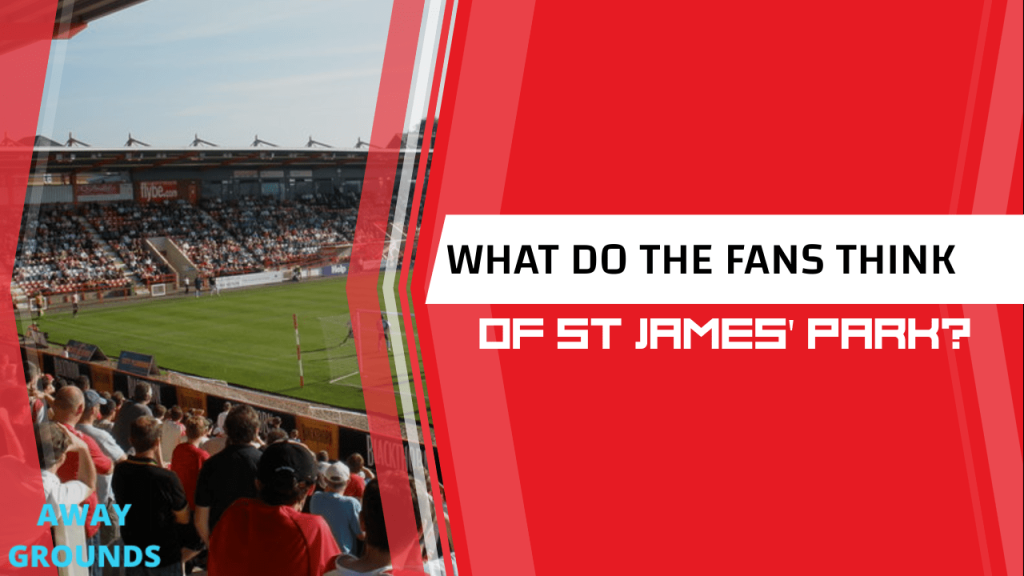 The toilet facilities have been reported as “awful,” consisting of 2 dingy cubicles in a shed with no lights. On the plus side, the stewards are reportedly very friendly and laid back in their attitude. The food sold within the ground has also been praised, especially the excellent Cornish pasties and pizza.

Which is the away end at St James Park?

At St James Park, away fans are seated in the top tier of the Leazes Stand on the far side.

What is St James Park away capacity?

For league games, the away section at St James Park can hold up to 3,000 fans, with a larger allocation available for cup matches.