Previously known as the Cherry Red Records Stadium, the Kingmeadow stadium is a football stadium located in Norbiton, Kingston upon Thames, London. The stadium is currently owned by Chelsea FC, who purchased it from AFC Wimbledon in 2015 for use in their women’s and youth clubs. Chelsea Women moved in at the start of the summer of 2017/18 FA WSL in time to start playing their match for the season.

It was renamed after Chelsea FC bought it out from the original owner, AFC Wimbledon, and is now the new home for Chelsea Women ladies team matches as well as the Chelsea U23s. This stadium was the former home of the Kingstonian FC team as well as the AFC Wimbledon league and was previously nicknamed the Fans Stadium.

The Kingmeadow or Cherry Red Records Stadium has two main stand or terraced bleachers – the Paul Strank Main stands and the John Green stands. The Rygas Terrace and Chemflow decks also allow a good view of what is happening, however, the Rygas Terrace is generally reserved for away fans only. All grandstands are covered and the roof of Kingston Road End has been widened to cover over 90% of the grandstand.

How to Get to the Kingmeadow

Leave the M25 at Junction 10 and take the A3 towards London. Follow the A3 for approximately 11 miles and take the New Malden / Worcester Park exit and turn left onto Malden Road (A2043) towards Kingston. Follow this until the next roundabout. Take the left filter lane and first exit onto Kingston Road (still A2043). Kingsmeadow Stadium is 1 mile on the left, not far from the Homebase Design Center, which will pass on your right.

Leave London on the A3 and take the New Malden / Worcester Park exit. Cross the A3 and take Malden Road (A2043) towards Kingston. Follow this until the next roundabout. Take the 1st exit onto Kingston Road (still A2043). Kingsmeadow is 1 mile on the left.

The closest train station to the Wimbledon AFC Cherry Red Records Stadium is Norbiton, which is less than a mile away. Trains run every 15 minutes from Waterloo via Clapham Junction and Wimbledon (Shepperton or Strawberry Hill terminal). 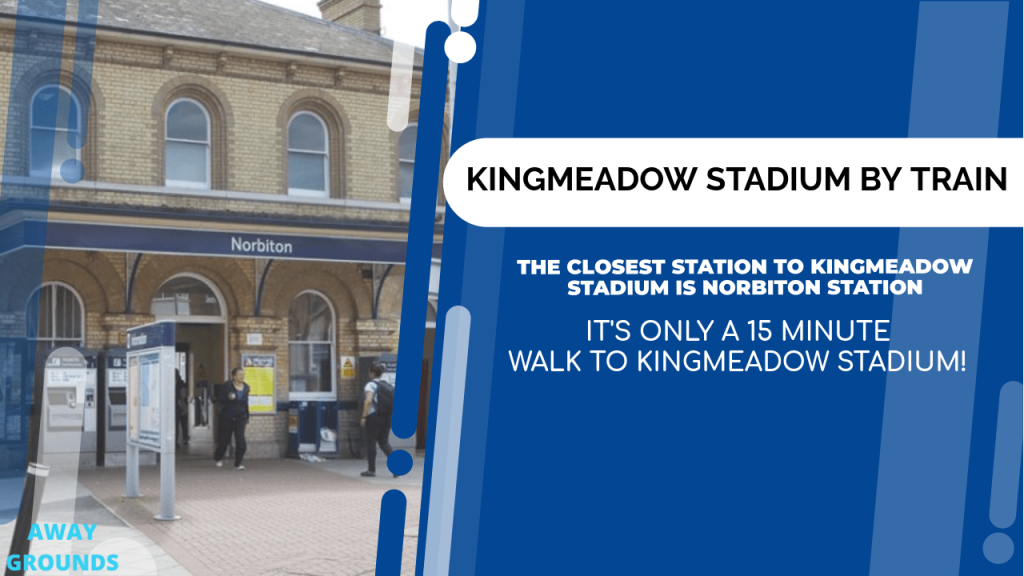 Exit the station through the back exit and take the first left onto Norbiton Avenue. At the end turn right onto Gloucester Road and walk down Kingston Road turn left. Kingsmeadow should be 400 yards on the right.

There is a relatively short supply of parking spaces, as the immediate area surrounding the ground is all residential. To guarantee a good spot, you`ll need to arrive at least 45 minutes prior to the game. The best streets to look down are around Waters Road and Rosebury Road just to the north of the stadium. 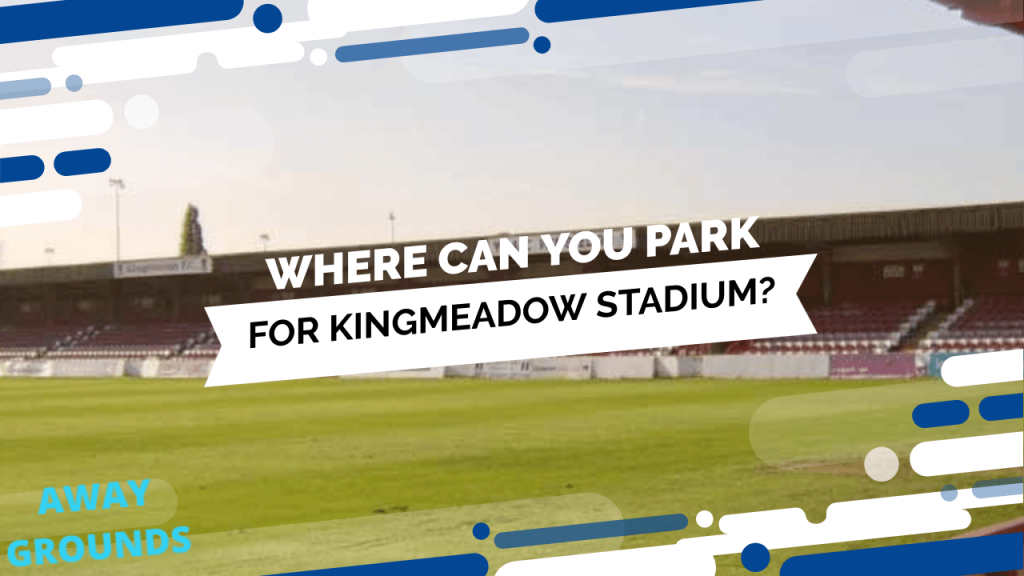 You can also opt to rent a local resident`s driveway and book Kingsmeadow parking using this link.

Away Friendly Pubs Near the Kingmeadow

There are several pubs in the area. Many visitors often go to the city centre and have a drink in downtown Kingston. But, nearby you can try The Peel. It’s on Kingston Road and it lets the fans in. The Cambridge Fish Bar, also on Kingston Road and a 2-minute walk from the flat, is definitely worth a visit. Alternatively, the club is now selling freshly made hot pizza at the stadium.

If you feel like having a drink in downtown Kingston or New Malden then take the bus to the city centre. Once in Kingston, take a bus to Tooting Broadway; Once in New Malden, take a bus to Kingston. There is a Wetherspoons store called Watchman on New Malden High Street, while Malden Bar is near the train station.

You can also try the Bricklayers Arms on Hawks Road which is about a 10-minute walk from the stadium. Here, you can have a beer while you watch football games on their screens. It’s a pretty known spot so, a good mix of home and away fans stay there. To find this pub, with the entrance to Kingsmeadow Stadium behind you, turn left onto Kingston Road. Where the road forks, turn left onto Hawks Road. The pub should be on the lower right side. 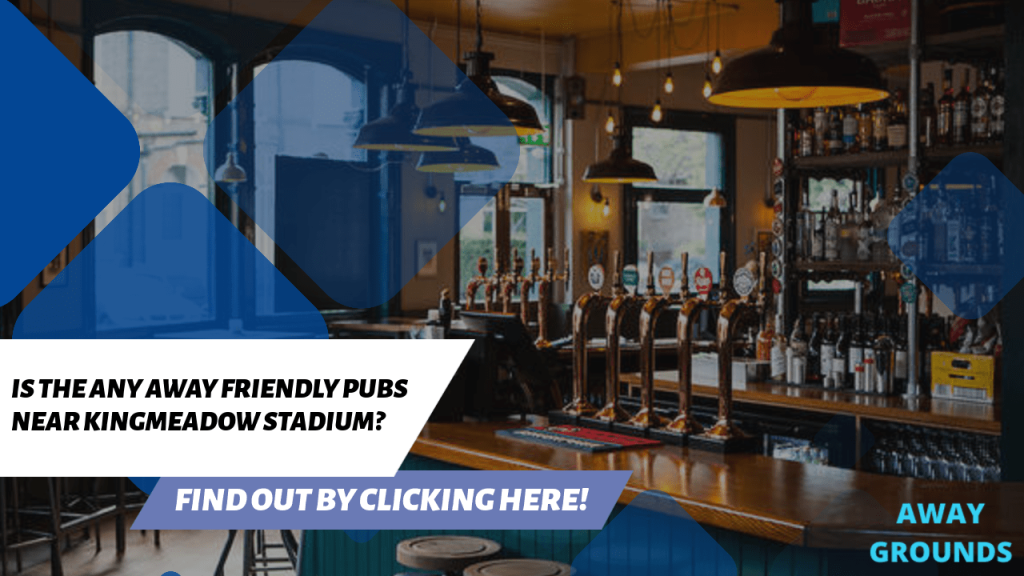 Although, if you feel like staying on the grounds, there’re two bars in the main Paul Strank booth. Visiting fans are generally welcome to visit the bars, however, the bars are only reserved for local fans for the biggest games.

If you’re planning to stay in the area, you can find local accommodations like Airbnbs, bed and breakfasts or inns, boutique hotels, and other bigger hotels. You can also check these most recommended accommodations out:

You can actually save if you wait and book during a sale, or if you use third-party booking sites like Agoda or booking.com.

What Have Other Away Fans Said About Their Trip to the Kingmeadow?

Visiting fans generally settle on one side of the RyGas booth on one side of the field. This small flat terrace is partially covered at the rear and offers space for up to 725 visitors. It is shared with the fans at home. Visiting fans are located on the terrace side of the John Green booth and are sufficiently separated from the home fans. Next to the stand there’s a small flat standing area that also leads to the refreshment area and the toilets. In addition, approximately 94 seats are made available in the John Green Stand, which is a relatively new covered stand. Turnstiles open 90 minutes before kick off. 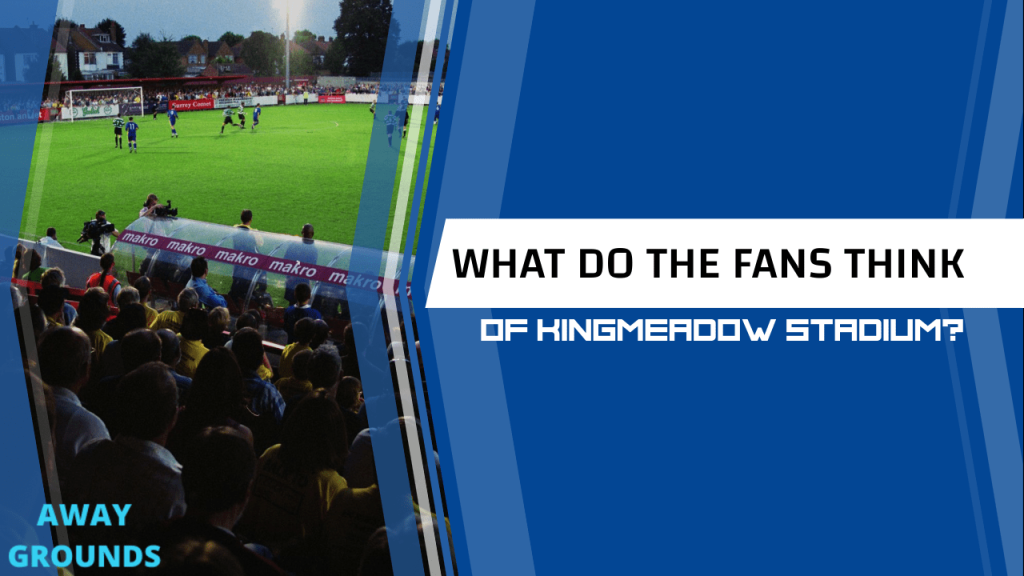 Note that the away terrace and seating areas are not accessible by going through the main entrance to the stadium car park. Away fans should instead continue going a short way along Kingston Road, keeping the main entrance on the right, and take the next right at the railings between the terraced houses, opposite King Henry`s Road, to go down to the away supporters turnstiles. Outside the site and near the main entrance is a handy chip shop whilst a bit further along is the Fat Boys Cafe.

Both local and away fans can definitely appreciate the history of this site. In November 2015, AFC Wimbledon supporters did support a proposal to sell the site to Chelsea F.C. Although AFC Wimbledon received £ 1 million of the money paid by Chelsea, the sale was extremely damaging to Kingstonian as they were unable to play on grounds that were now too big and expensive for a non-league team. Kingstonian started a shared lot with Leatherhead F.C. in 20178 and then to King George’s Field in Tolworth, where they met CorinthianCasuals F.C. of the 2018/19 season.

Which is the away end at The Kingsmeadow Stadium?

When visiting The Kingsmeadow Stadium, away fans are mainly situated on one side of the pitch, in the RyGas Stand.

What is The Kingsmeadow Stadium away end capacity?

At the Kingsmeadow Stadium, around 725 away spectators can be seated in the RyGas Stand.