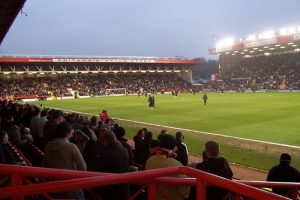 Ashton Gate Stadium, the home of Bristol City is located in the South-West of the city, with an all-seater capacity of 21,497.

Its most recent addition is the Atyeo Stand at the West end of the ground, a covered, single-tier stand which replaced open terracing in 1994. It is named after City’s all-time leading goalscorer, John Atyeo, who died in 1993.

Visiting fans are housed in the Wedlock Stand, behind the goal at the south-east end of the ground, which was built as a covered terrace in 1928 and converted to seats in the 1990s.

How to Get to Ashton Gate

The stadium is located in Ashton Road, Bristol BS3 2EJ.

Visitors driving from the North are advised to use the M6 / M5 route, exiting the M5 at junction 15 onto the M4 towards Bristol / M32. Exit the M4 at junction 19, following signage for Bristol / A4174. Follow the A4032, turning left at Bond Street. Take the 2nd exit at Temple Circus Gyratory onto the A4. Take the 2nd exit at the roundabout onto the A370, following it through one roundabout. Upon turning left at Frayne Road, Ashton Road is the first right.

Bristol Temple Meads mainline railway station is with ¾ of a mile of the ground. 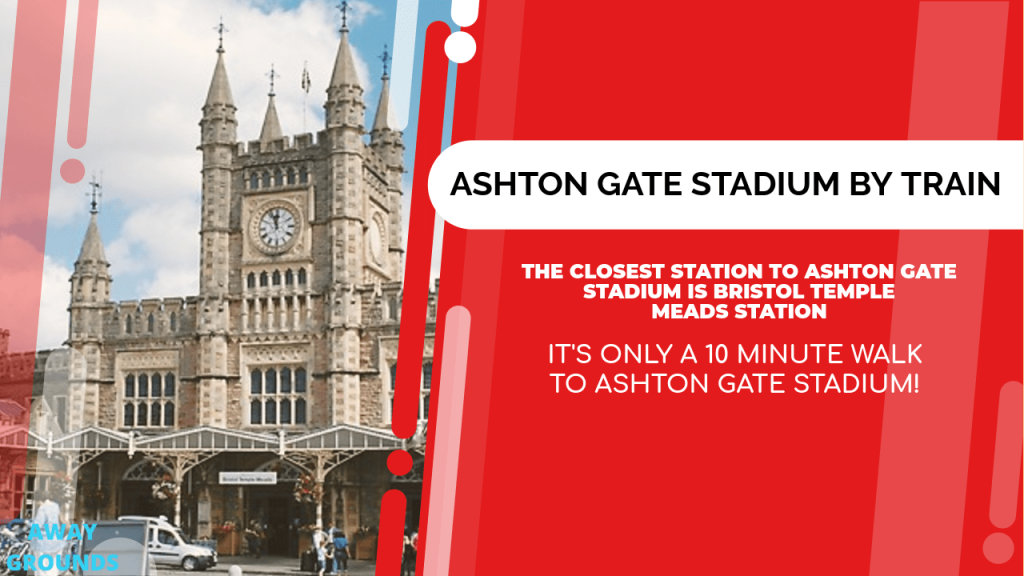 The nearest airport is Bristol International, about 5 miles from Ashton Gate Stadium, with frequent rail and bus connections to Temple Meads station. Click here to check the current flight times

There are several taxi companies in Bristol that can take you to and from Ashton Gate. You can always prebook a private hire taxi, or hail a black cab on any highway.

Calling all Bristol Taxi Companies – Why not advertise your company here?.

On-site parking at Ashton Gate is reserved for permit holders only and on-street parking is very limited. 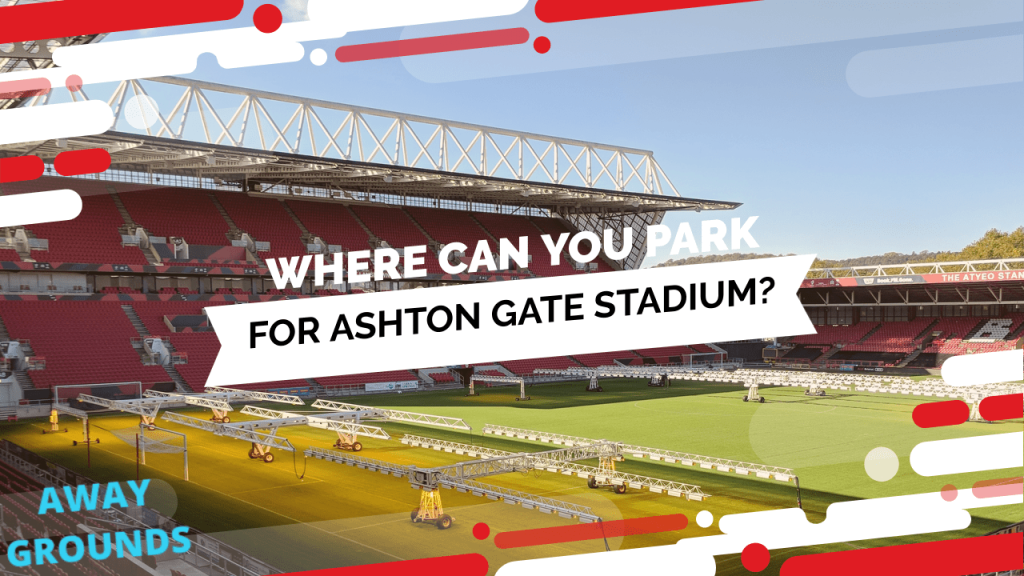 Many visiting drivers have recommended the car park on Ashton Vale Road, which is a right turn off Winterstoke Road, opposite the stadium. This large car park (400+ spaces) is reasonably priced and only a 2-minute walk from the ground.

Away Friendly Pubs Near Ashton Gate

Numerous fans have pointed out that several of the pubs near Ashton Gate are extremely partisan and should be given a wide berth by visiting fans. These include The Hen & Chicken, The Ship & Castle and The Robins. Several visitors have recommended the waterfront area for away supporters. 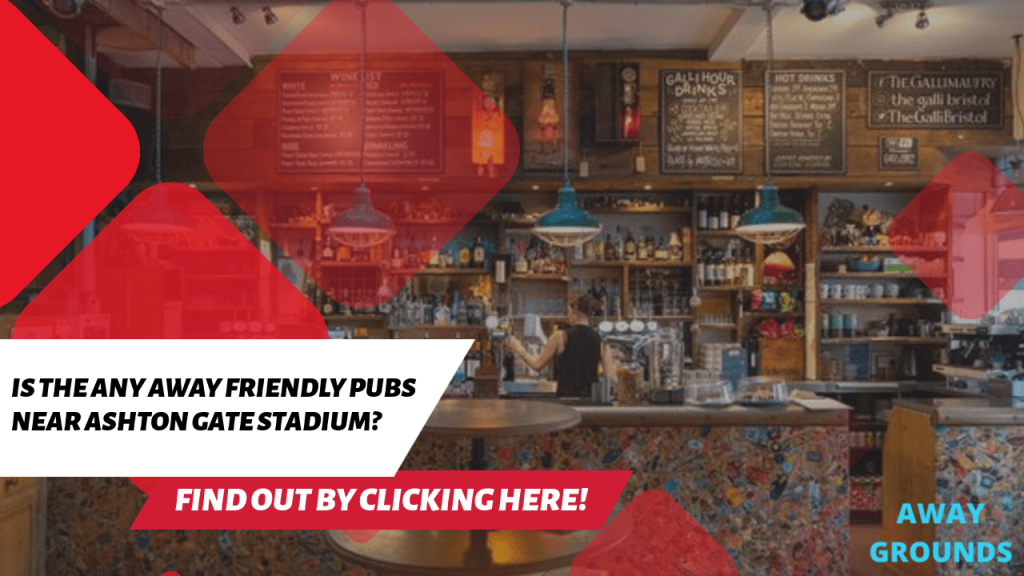 Both The Pumphouse and The Nova Scotia in this area offer a good choice of beers, decent food and a friendly welcome for visiting fans. Alcohol is not available to away fans inside the ground.

The Ramada Bristol City, Redcliffe Way, Bristol BS1 6NJ is located in the city centre, close to Temple Meads station. Guest reviews have generally been excellent, though drivers should be aware that the one-way system can make it tricky to reach. All rooms have satellite TV and facilities include an indoor pool. Parking is available at additional cost.

The Marriott Bristol Royal, College Green, Bristol BS1 5TA is another centrally-located hotel, adjacent to the historic waterfront. All rooms are air-conditioned, with cable TV and mini bar. 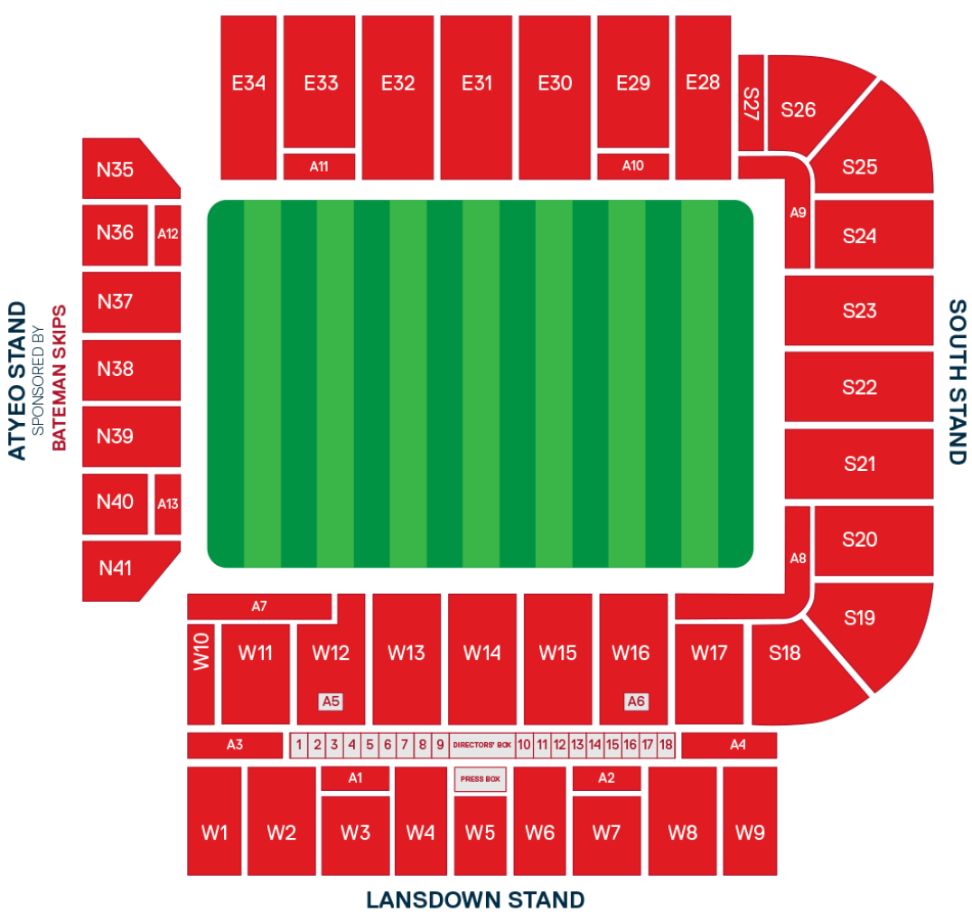 What Have Other Away Fans Said About Their Trip to Ashton Gate?

Several away fans have noted that other than the impressive-looking Atyeo Stand, the interior of Ashton Gate is run-down, with the facilities in need of improvement. Catering and toilet facilities become extremely overcrowded, with long queues at both. The choice of food offered is limited, reportedly of poor quality and overpriced. 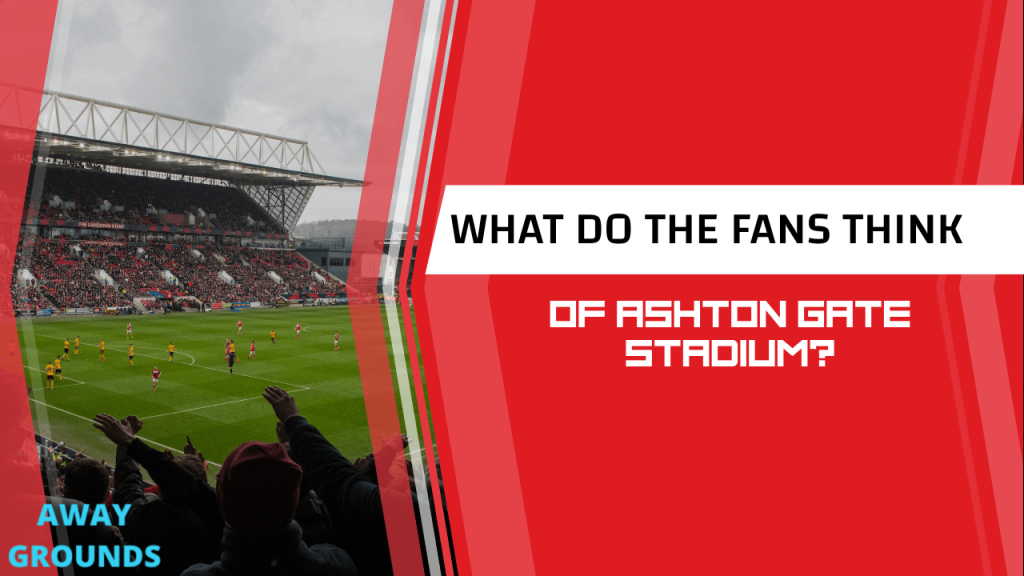 Seating in the away section has been generally described as “basic,” though legroom is ample. Most fans have been impressed by the atmosphere within the ground, the low roof of the Wedlock Stand producing excellent acoustics. Additionally, a small band often occupies a corner of the Atyeo Stand, helping to rouse the home support.

Booked our work Christmas Party at Ashton Gate for their Casino Royale Party for a group of 18 people. The room looked beautiful as did all the guests. Every member of our group thoroughly enjoyed themselves. Food was excellent and music was perfect mix of party tunes. Definitely looking at booking for next year and looking into any other tribute nights they hold. Well done on a great night.

Came with friends for the take that concert. Was very well organised. Good info beforehand. Queues for the bar and porta-loos great for the amount of people who attended. Didn’t wait very long at all for drinks or toilets. Staff very friendly and helpful, they let me out of a different exit to avoid the queues as being pregnant meant I could access the toilet a bit quicker 🙂 I was very impressed by the great staff and the organisation.

The stadium was significantly improved over the years, and in 1913 it hosted an international match between England and Wales. In 1935, an FA Cup match between Preston North End and Ashton Gate drew 43,335 fans.

The Williams Stand, a new primary stand, was inaugurated in 1958. The rebuilt Dolman Stand was built on the opposite side twelve years later, in 1970.

Until the 1990s, when it was transformed into an all-seater, the ground remained virtually untouched. A new Atyeo Stand was built behind one of the goals at the same time (in 1994). A second lower deck was added to the Dolman Stand a year later.

Bristol City began looking into the possibility of developing a new modern stadium in the early 2000s. The Ashton Vale Stadium, a 30,000-seater just south of Ashton Gate in the Ashton Vale district, was planned, but it was delayed and then scrapped due to strong opposition from local residents and environmental organisations.

Instead, Bristol City revealed plans for the redevelopment of Ashton Gate in late 2013, initially as a backup to the Ashton Vale proposals, but since April 2014 as their primary intentions.

Both the Williams and Wedlock Stands were constructed over a two-year period beginning in the summer of 2014, while the other two stands were restored. The project was finished in 2016, and the capacity was increased from 21,000 to 27,000 seats.

Getting tickets for Ashton Gate Stadium

On the day of the match, tickets are also available at the stadium. Bristol City only sells out on rare occasions.

Bristol City’s home matches are divided into two pricing groups. The lowest Silver tickets range from £23.00 for a seat behind the goal to £31.00 for a prime seat in the main stand. The more expensive Gold matches include tickets ranging from £28.00 to £36.00. Tickets purchased on the day are £5.00 more expensive.

The ideal meeting and events experience can be found at Ashton Gate Stadium in Bristol. Our stadium, which is a top conference and events venue, offers a variety of function rooms for both corporate and private hires. Ashton Gate Stadium features a space or area to suit any need, from wedding receptions to team-building exercises.

Ashton Gate Stadium, as one of the largest event venues in the South West, offers a variety of modern and spacious rooms large enough to easily host social activities, personally delivered lunches, and enough airflow throughout, all with pitchside views.

What is the capacity of Ashton Gate stadium?

The capacity of the Ashton Gate stadium is 27,000.

How old is Ashton Gate Stadium?

Does Bristol own Ashton Gate?

The owner of Ashton Gate Stadium is Bristol City FC.

What is Bristol City away end allocation?

The away end capacity at Ashton Gate is around 4,200.

Which is the away end at Ashton Gate?

Away supporters are housed in the Atyeo Stand at Ashton Gate.

We hope our guide to Ashton Gate Stadium helped you today. Thank you for reading.