Bescot Stadium, also known for sponsorship purposes as Banks’s Stadium, is a football stadium in Walsall, England and the current home of Walsall Football Club and Aston Villa Women. It was built in 1989-90 and the stadium replaced the club’s previous site, Fellows Park, which was a quarter-mile away.

The stadium was inaugurated on August 18, 1990, by Sir Stanley Matthews before a friendly match with neighbouring Aston Villa in front of 9,551 spectators. Aston Villa won the game 4-0. Walsall’s first goal at the stadium was scored by Stuart Rimmer.

Originally, both ends of the site were standing space and the site capacity was 11,104. However, the capacity was reduced to around 9,800 in 1992 when the fan deck was filled with seating. This stadium also has women’s professional football games where several women’s teams fight to be the best women’s super league.

How to Get to the Bescot Stadium

The bank’s stadium is located two miles south of downtown Walsall in the Bescot area. You can input the address Bescot Stadium Walsall, West Midlands, WS1 4SA on sat nav so you can route your trip better.

Bank’s Stadium has its own station called “Bescot Stadium” with London Midland connections from Walsall and Birmingham. 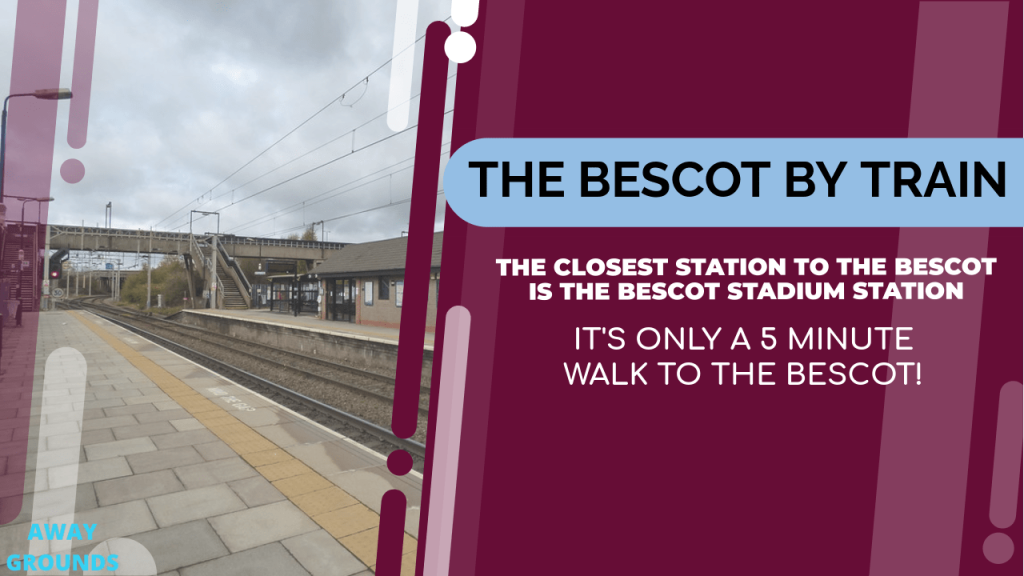 The walk to the stadium is very easy and takes less than five minutes. When you exit the train station, you need to cross the Tame River on the footbridge and take the path below over the highway. The stadium is immediately visible as soon as you cross the M6.

For a list of parking spots, you can check out this link to Parking Spots 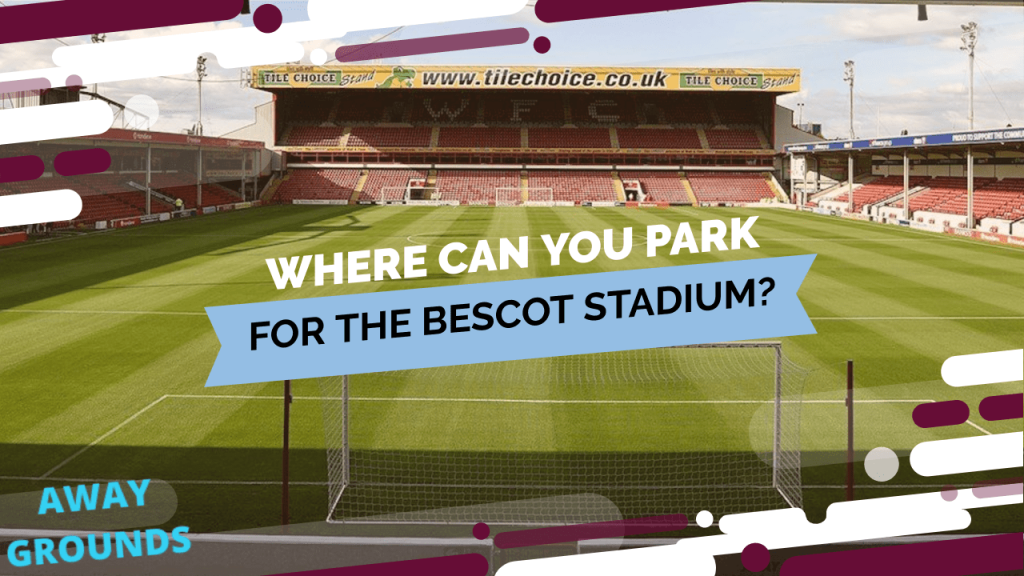 The bank’s stadium car park charges a reasonable fee of £4 per vehicle, and parking spaces are allocated on a first-come, first-served basis. Long-term parking is not allowed in the Retail Park, so it’s not suitable for players participating in the game, as those who ignore it may face parking tickets.

Away Friendly Pubs Near the Bescot Stadium

There are five other bars in the stadium: the Swifts and Priory Lounges at the rear of the Main Grandstand, the Bescot Bar below the lower level of the Homeserve Grandstand, a bar below the Distance Grandstand, and one below the Family Grandstand. To the southwest, is the club-run Saddlers Club, which is a great place for home and away fans to enjoy a pint before the game. 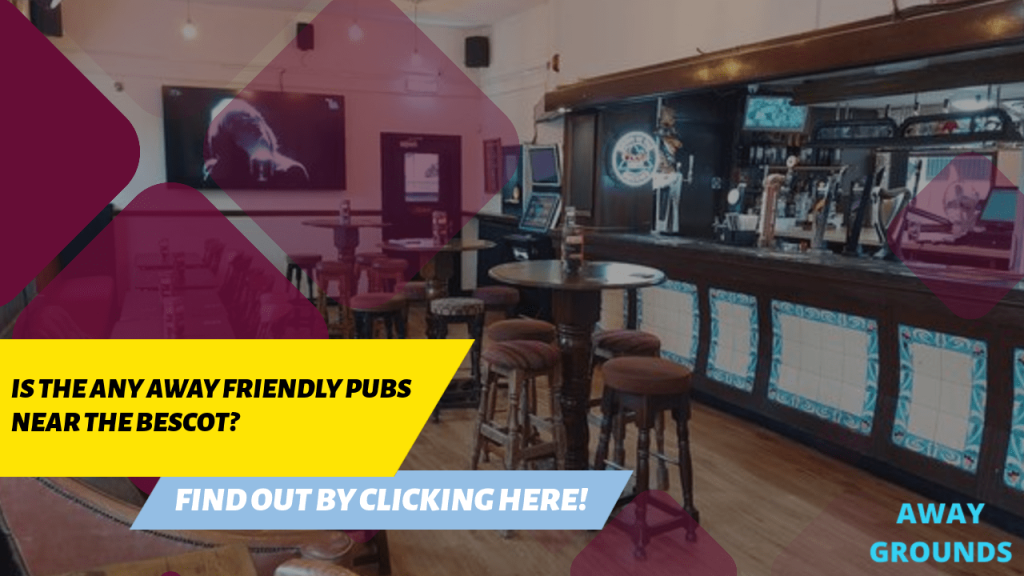 There are also some food stalls in and around the stadium.

Hotels Near the Bescot

The closest hotel is the Park Inn which is less than 2 minutes southeast of the stadium on Bescot Crescent. There are other hotel and motel options such as the Holiday Inn and the Premier Inn just off the M6 ​​near the Walsall exit.

What Have Other Away Fans Said About Their Trip to the Bescot?

If you’ve been to at least one game in this stadium, you’ll know that visiting fans and the local fanbase normally sit on opposite ends of the arena. Visiting fans can go behind the southernmost door of the KIA booth, which is named after the Korean automaker. The Away Stand, which is opposite the much larger Tile Choice Stand to the north, can accommodate approximately 1,900 fans. 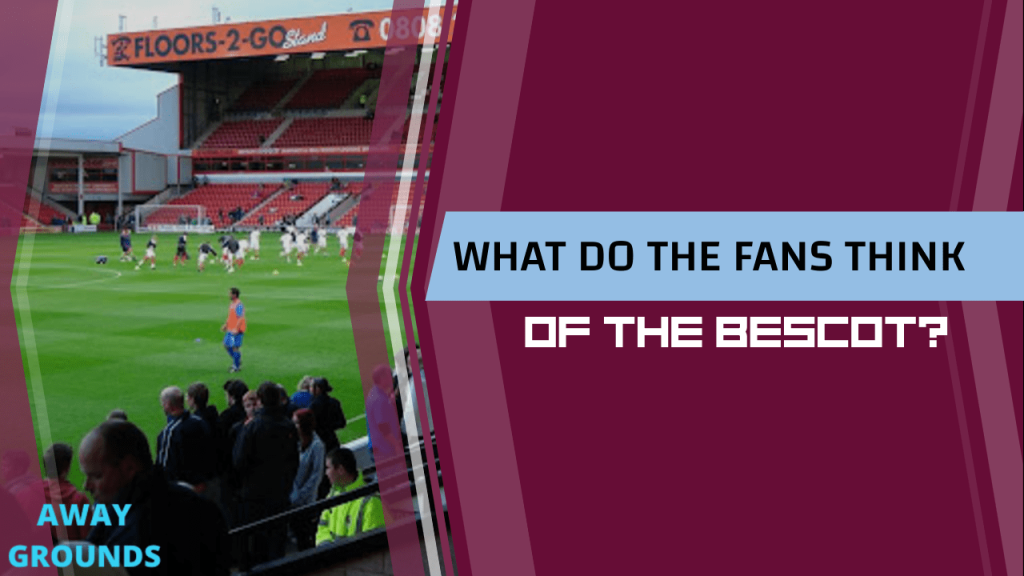 However, if you’re a neutral fan attending the game, you may want to sit at one end of the floor at the Tile Choice booth. It contains two bars, refreshment kiosks and a huge television screen showing the latest scores.

Which is the away end at The Bescot?

Away supporters are housed in the University of Wolverhampton Stand at Bescot Stadium.

What is The Bescot away end capacity?

2000 away fans can be accommodated in the University of Wolverhampton Stand at Bescot Stadium.

Where do Aston Villa Ladies play their home games?